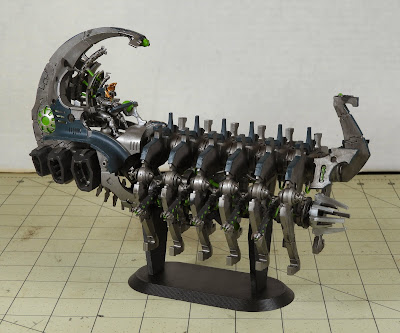 The Necron Doomsday Ark is a fun, flying gun platform. On a tiny, fragile flight stand that was designed for models a quarter of its size. Mrs. Blackheart got tired of me complaining about it and set her mind to the problem.

Through the magic of 3D printing, we proudly present you a very stable alternative. 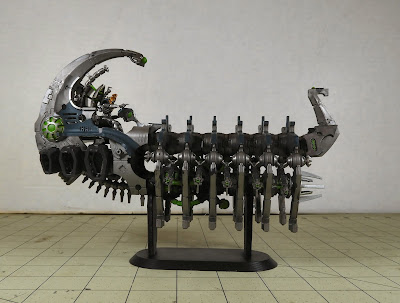 It does need some sort of glue to stay attached. I used hot glue. Odd choice, I know, but it forms a really solid bond, and fills in gaps very well. Also it will be easy to break it loose with no damage to the model should that ever become necessary. Green Stuff, or gap-filling CA will work just fine as well. 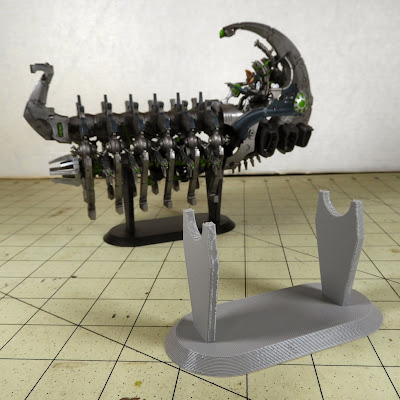 The STL file is available here Please tip the designer if you find it useful.
It really does make the Doomsday Ark much more fun to use on the table.

The Power of 3D Compels You!

Bring More Stability to the Necrons 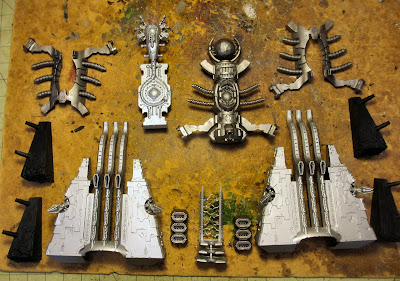 I received a fancy new style Monolith for my Birthday, and I set out to get it on the field in short order.
But dire warnings came from across the void, "Paint it before assembly! Or you will be forever Cursed!"
Good advice. Thanks formless void wraiths! With this in mind, I spent a bit of time planning the build and painting of this beast before I cut anything off the frames.
The Monolith breaks down into a few easy to manage sub-sections. After building those, I sprayed them three different colors for the base coats. Painting up the details wasn't difficult, but did take some time, it's kinda big. 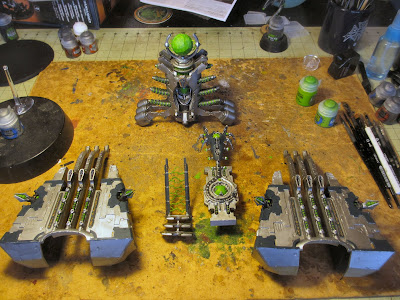 I further assembled the Core section, reducing the number of sub-assemblies left for final assembly.
After a few test fittings to ensure painting sight lines, it all went together smoothly. 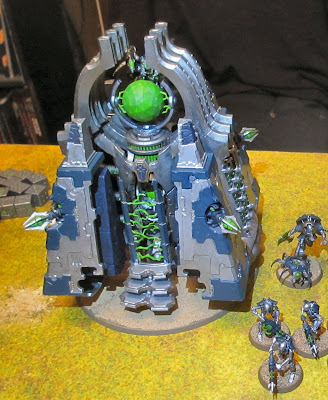 Not a bad looking bit of kit. Now it can dispense Necron justice across the galaxy, and keep these younger races off the lawn.
Assemble By Logic
Game by Chance

Posted by Marcus the Blackheart at 4:31 PM No comments: 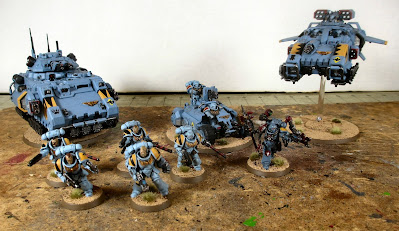 Yet more Space Wolves. This does complete the army for now, and fills in a couple of operational gaps in the roster. First up is another HQ choice, but a really cool figure and pretty useful on the field as well: The Iron Priest. 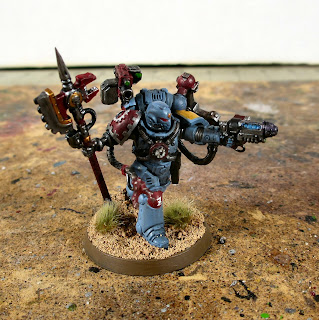 Built straight out of the package, but given a darker blue/gray armor with a good amount of Mars red. 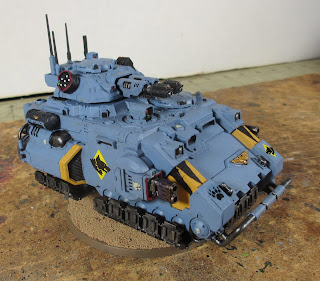 A slightly smaller Grav Panzer, but so much firepower. I went for the Valiant variant of the Gladiator.
All weapons are only 24", but that is eight shots of Anti-tank fury! For bonus fun I painted up the twin gatling cannon turret weapon, which can be easily swapped out. 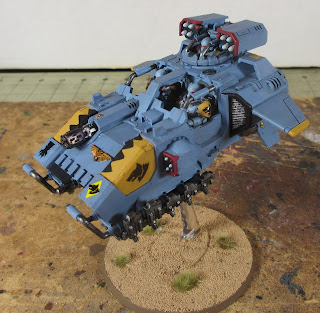 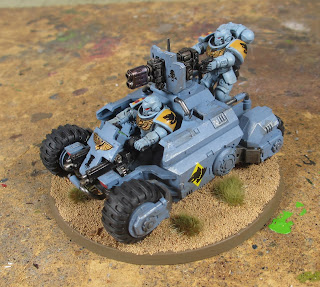 Fast attack! This is what my Wolves had been missing. Flanking is fundamental. I liked both kits, but the Storm Speeder went together better than the Invader ATV.  To my surprise the Invader is a push-fit model, sometimes those don't seat very tightly and require some trimming of the pegs. I also had to dig up a base to put it on. All the other vehicles have a base so I thought it would be weird if it didn't get one.
The one thing that does bother me about the Storm Speeder and the Gladiator is the lack of choices in outfitting them. There are three variants for each, but no mixing and matching turret/secondary weapons like with the Predator, Leman Russ Tanks, Repulsor, and others. I wanted my Gladiator to have Twin Gatling Cannon turret guns with sponson Multi-meltas! A minor quibble, but one that bugs me.
All very enjoyable to build and paint. Now I have to take a new pack portrait.
Go Make Something
Then Use it to Crush Your Foes