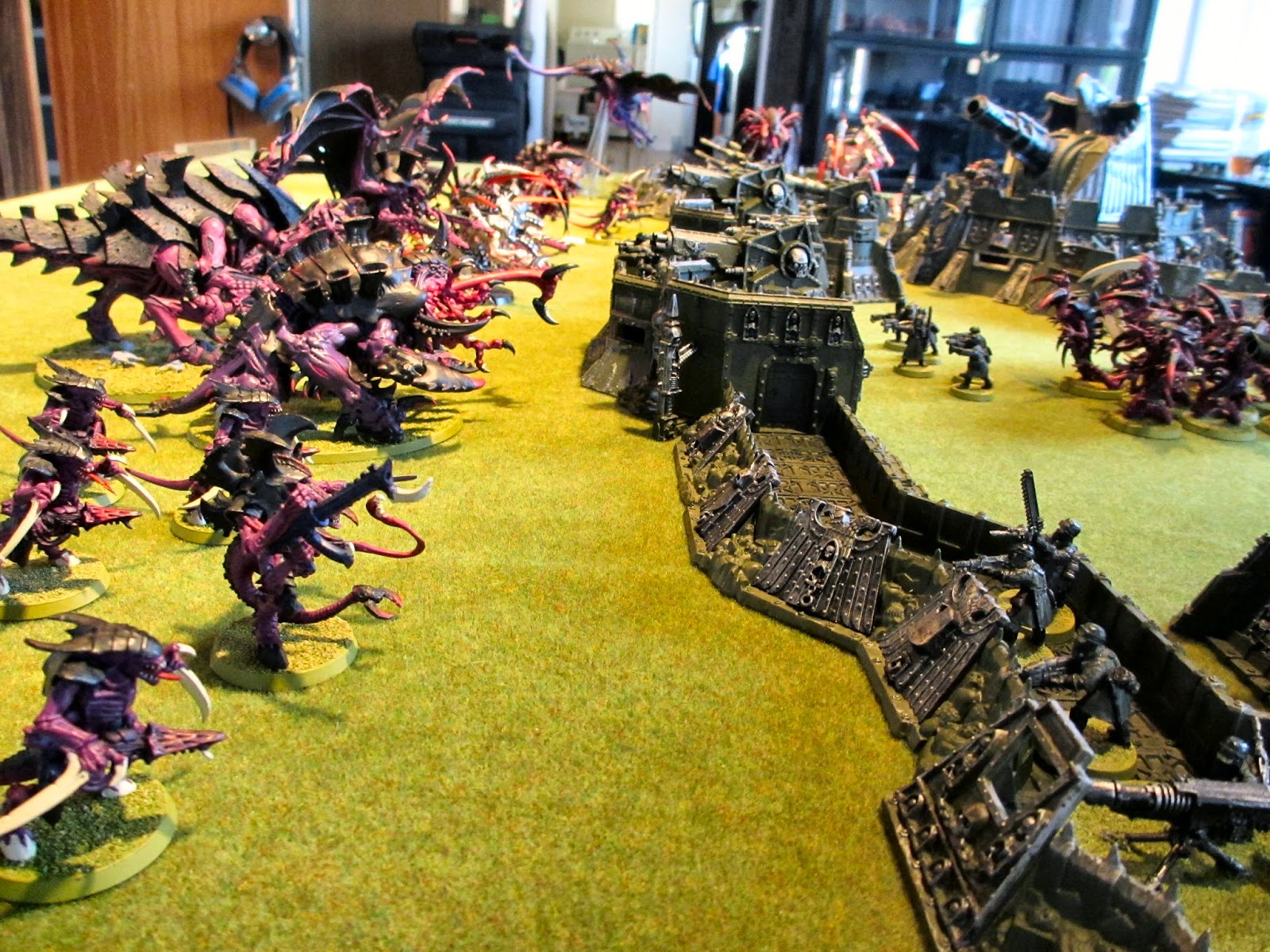 So much for my grand plans for September. We are (finally) kicking off the Sanctus Reach Campaign in a week or two now that some sanity has returned to all our schedules. So for today may I present the answer to a question: Can a Imperial Guard fortification hold off a Tyranid attack? The twist is the Guard get only fortifications and infantry with nothing in reserve. 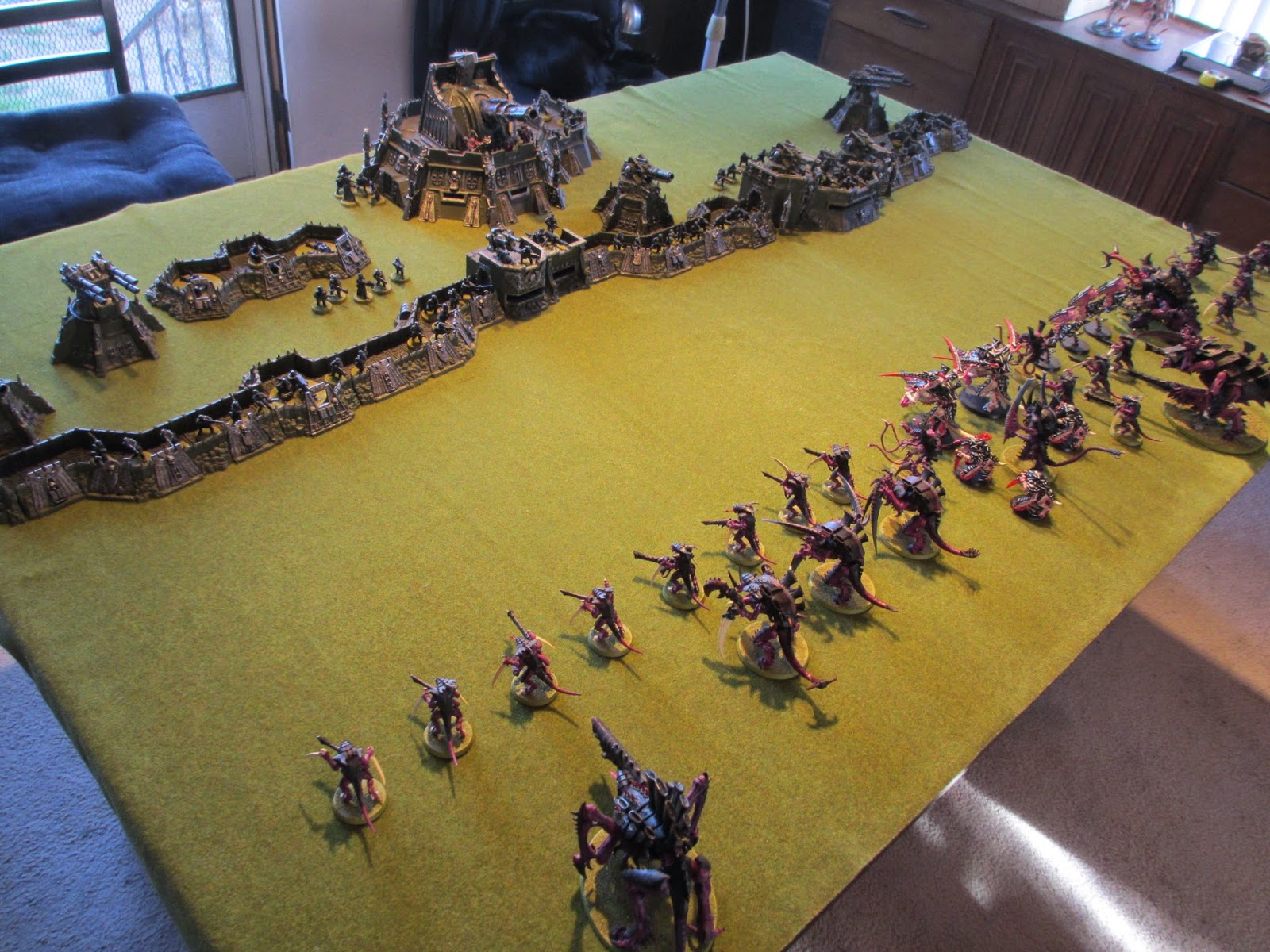 The Tyranid players went for the Warriors and up army style. Lots of monstrous creatures with a few key support critters. That damn Venomthrope kept the Barbed Hierodule from taking any damage the first turn. I wasted a good portion of my firepower for no return. At this scale is does truly become target overload. There are so many units that you have to kill, if you are not careful, you will wind up not killing any of them. Like I did. Much to my detriment. 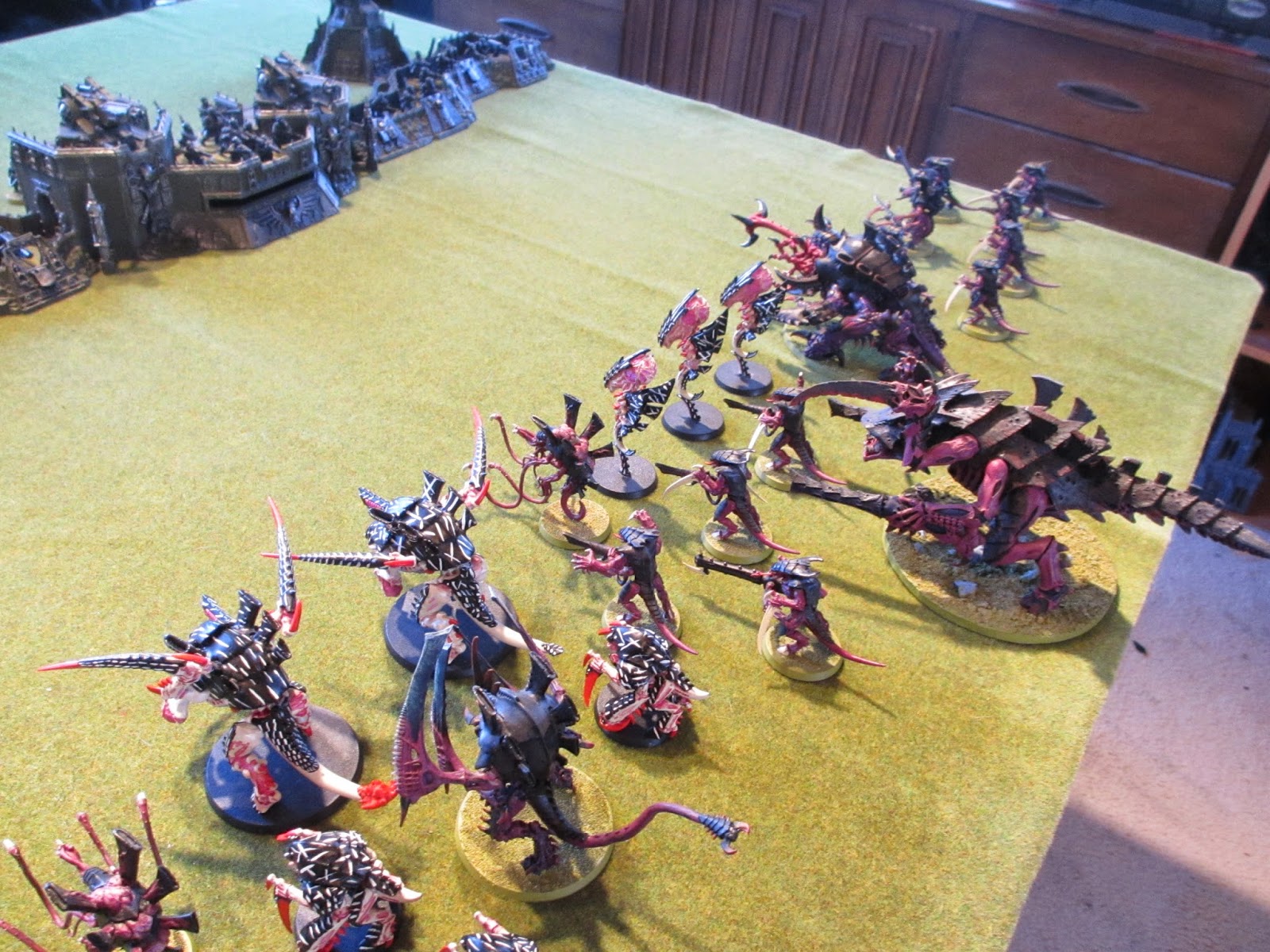 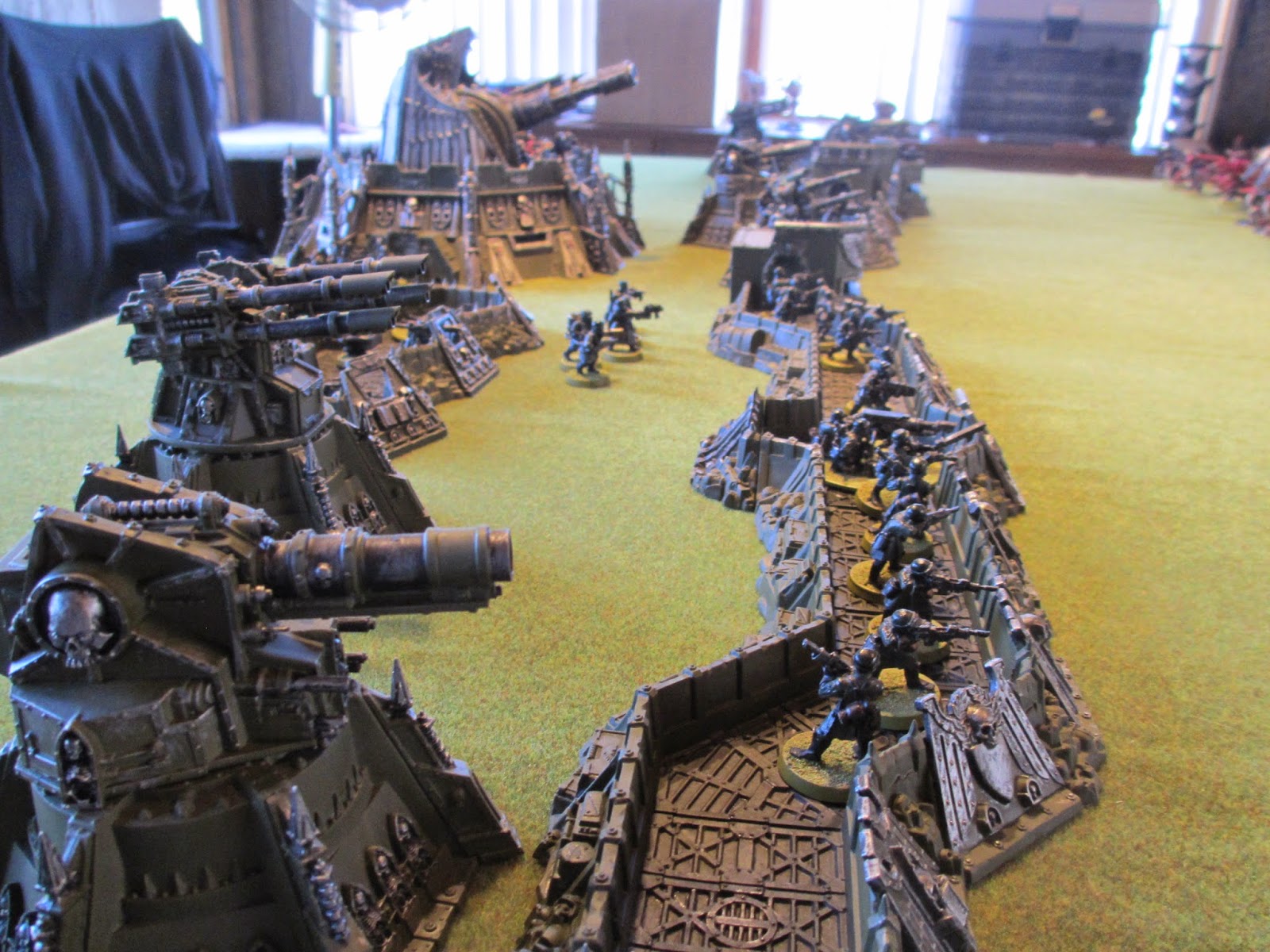 What I really should have done was kill off the Swarmlord right away. Because I didn't, ALL of the Tyranid reserves showed up on turn two. I knew I was frakked, but I fought on and hoped for some really hot dice. 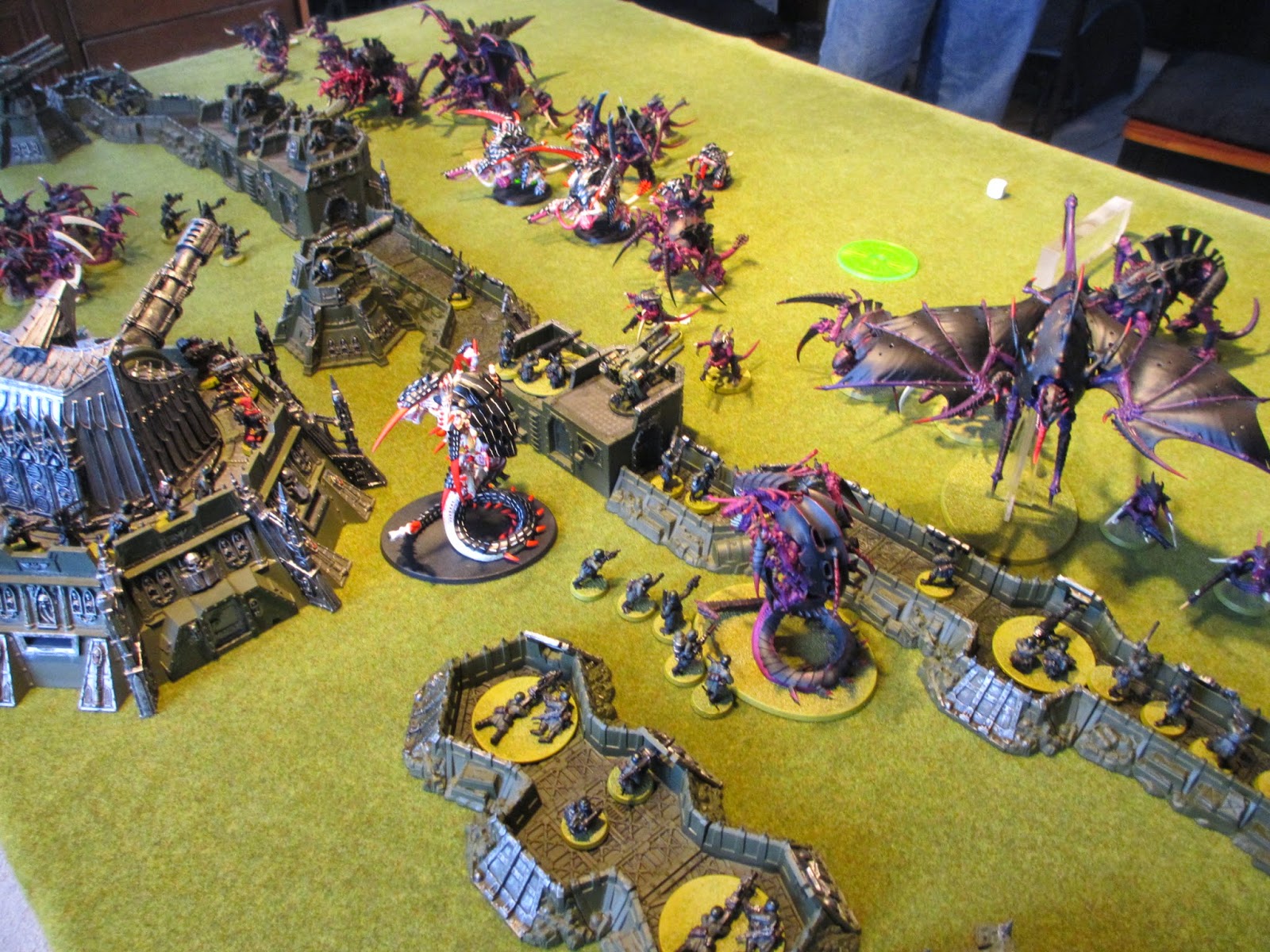 And the hot dice showed up! Sadly it was the Tyranids who were rolling them and I lost two my bunkers and a whole lot of troops. I can't help but be amused when a game game goes so badly, so quickly. It just wasn't the Guards day, but it was still a grand spectacle. 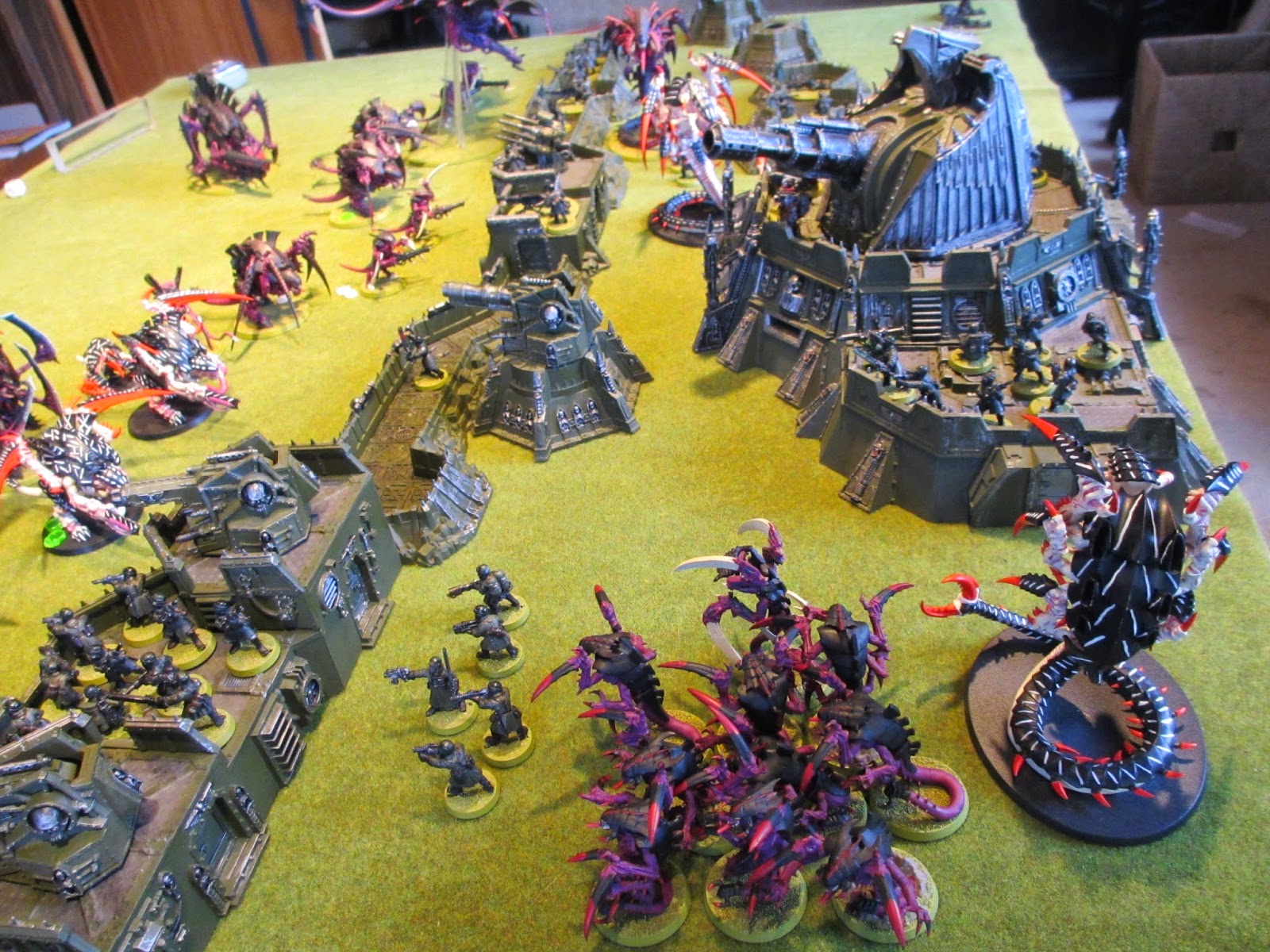 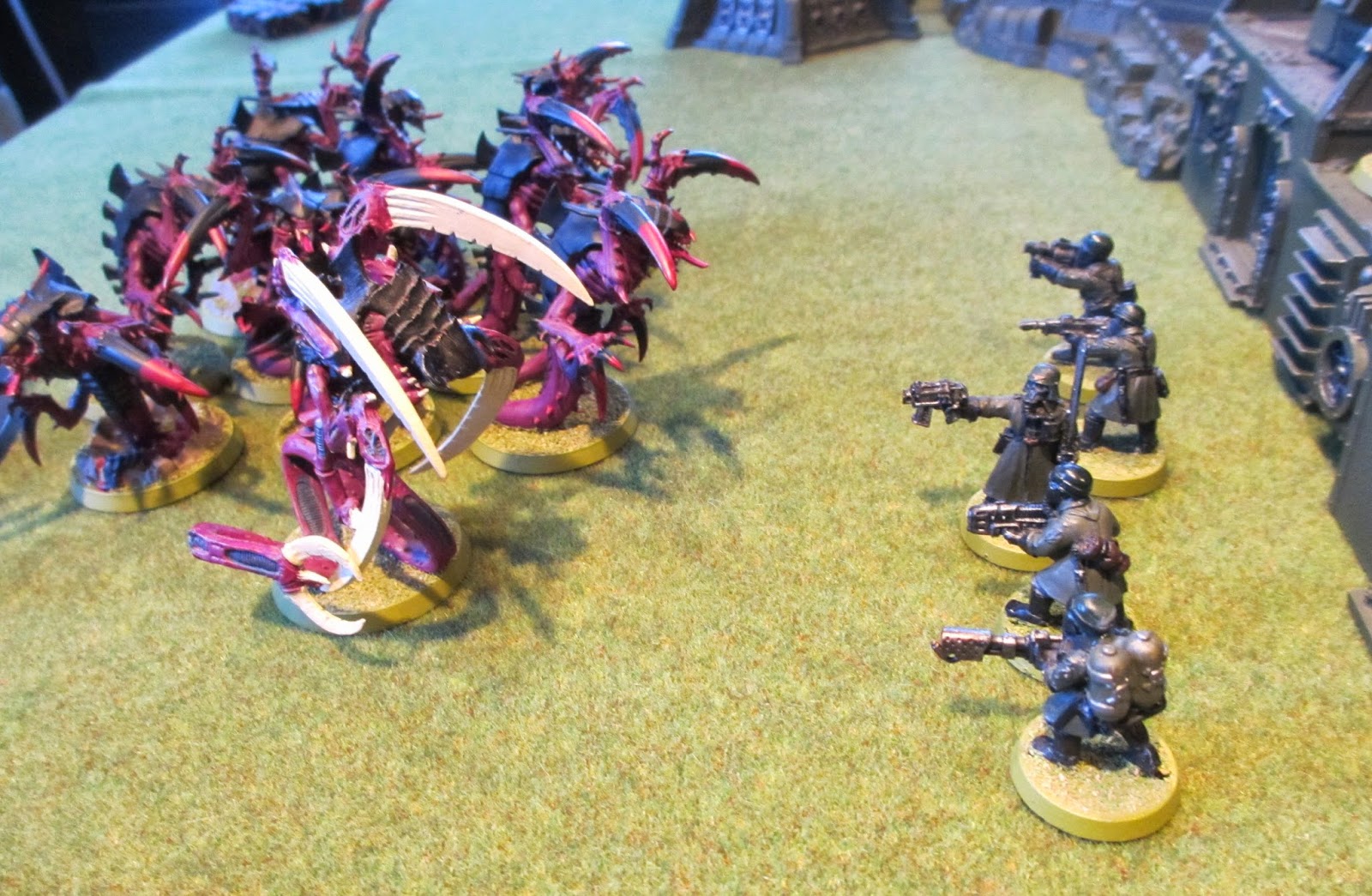 My command squad put in a fine showing, almost wiping out a squad of Raveners. Almost does not quite cut it when dealing with the Red Terror and a friend. The command squad was quickly dispatched, and for the finale, Old One Eye disassembled the Macro cannon bunker. Top of turn three, game over.

A enjoyable bloodbath. The game went very quickly despite the large number of models on the table. I am already planning for the rematch.

The Swarm Rolls On
Try not to be in its path.
Posted by Marcus the Blackheart at 4:50 PM 1 comment:

Now things were getting really interesting. A few favorites had fallen early, and a few glaring defects revealed. Round two, fight! 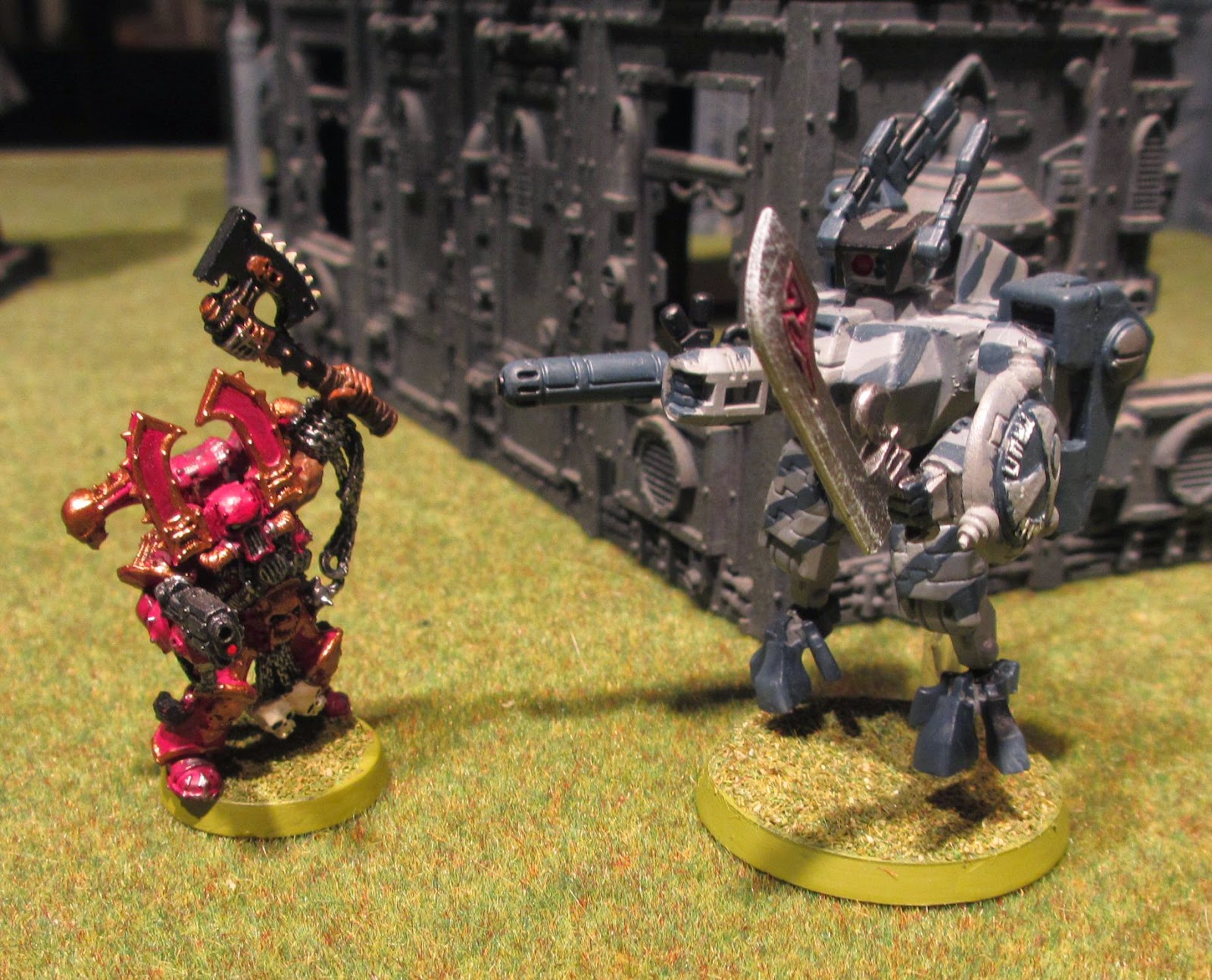 Commander Farsight continued his upset streak. First by nailing Kharn for two wounds with his plasma rifle, then by making an improbable amount of invulnerable saves as Kharn rained blows upon him. The Dark gods failed to protect Kharn from the Dawn Blade and he was bested in two rounds of close combat.


The Avatar of Khaine vs. Anrakyr the Traveller 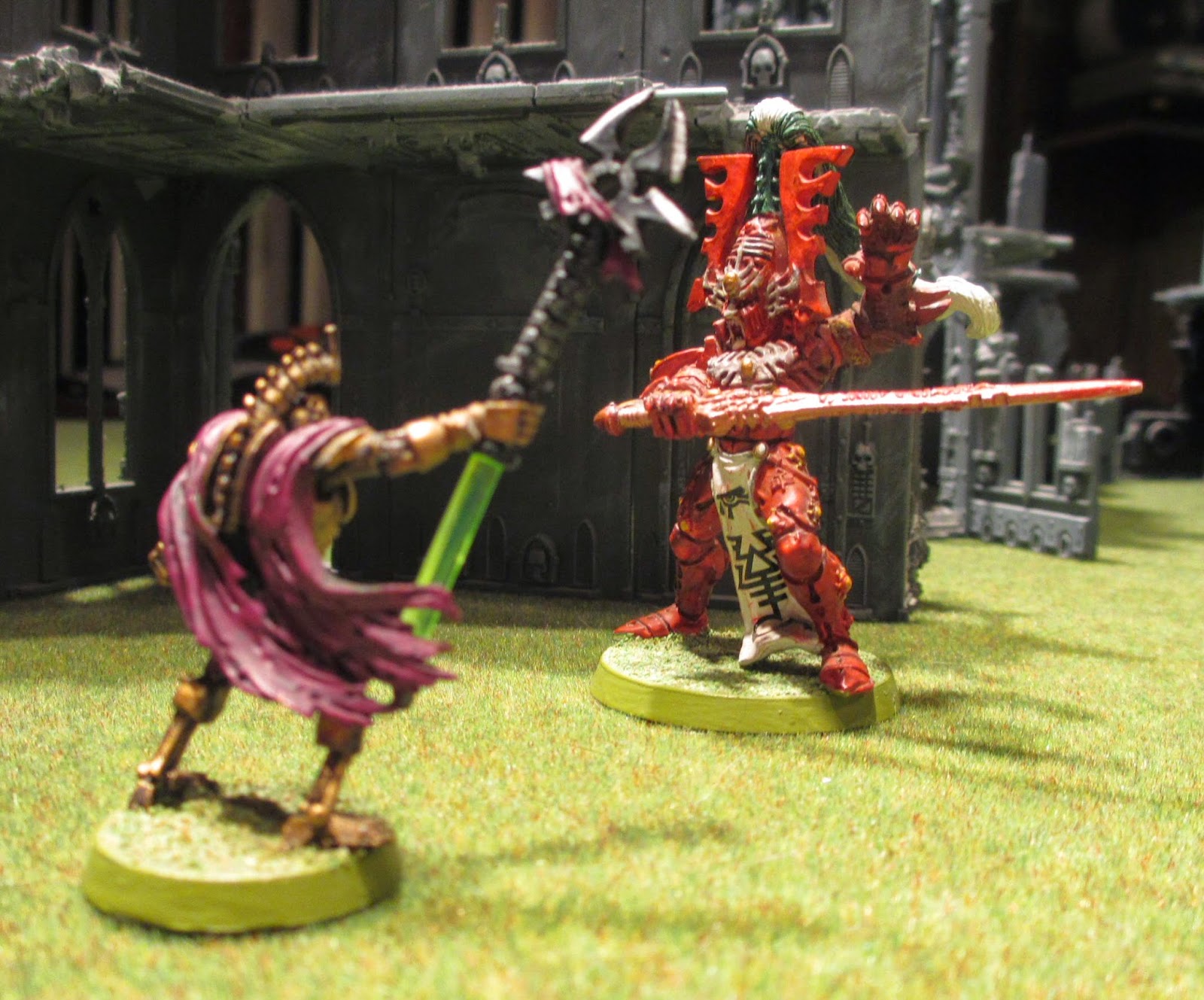 Anrakyr landed the Tachyon Arrow and did a wound on the Avatar. It would be the only wound The Avatar would take this match. The Avatar crushed Anrakyr the Traveller in short order. He did not get back up.

Abaddon vs. The Swarmlord 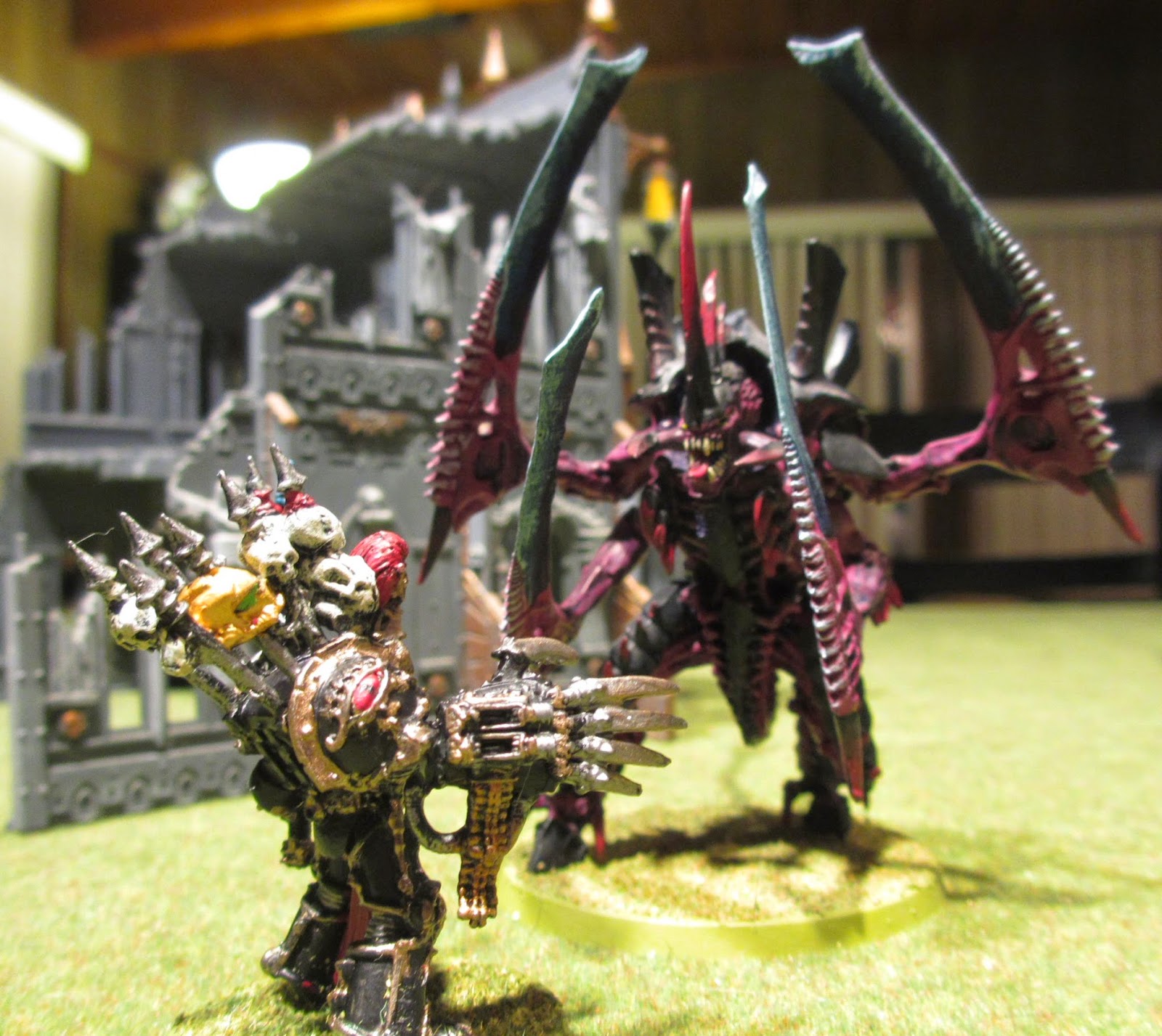 A epic battle of initiative six monsters that did not disappoint. Five rounds of combat with lots of wounding and saving. On the last turn, Abbadon lost his last wound and scored four wounds on the Swarmlord, she made three saves and ended the battle with one wound left. 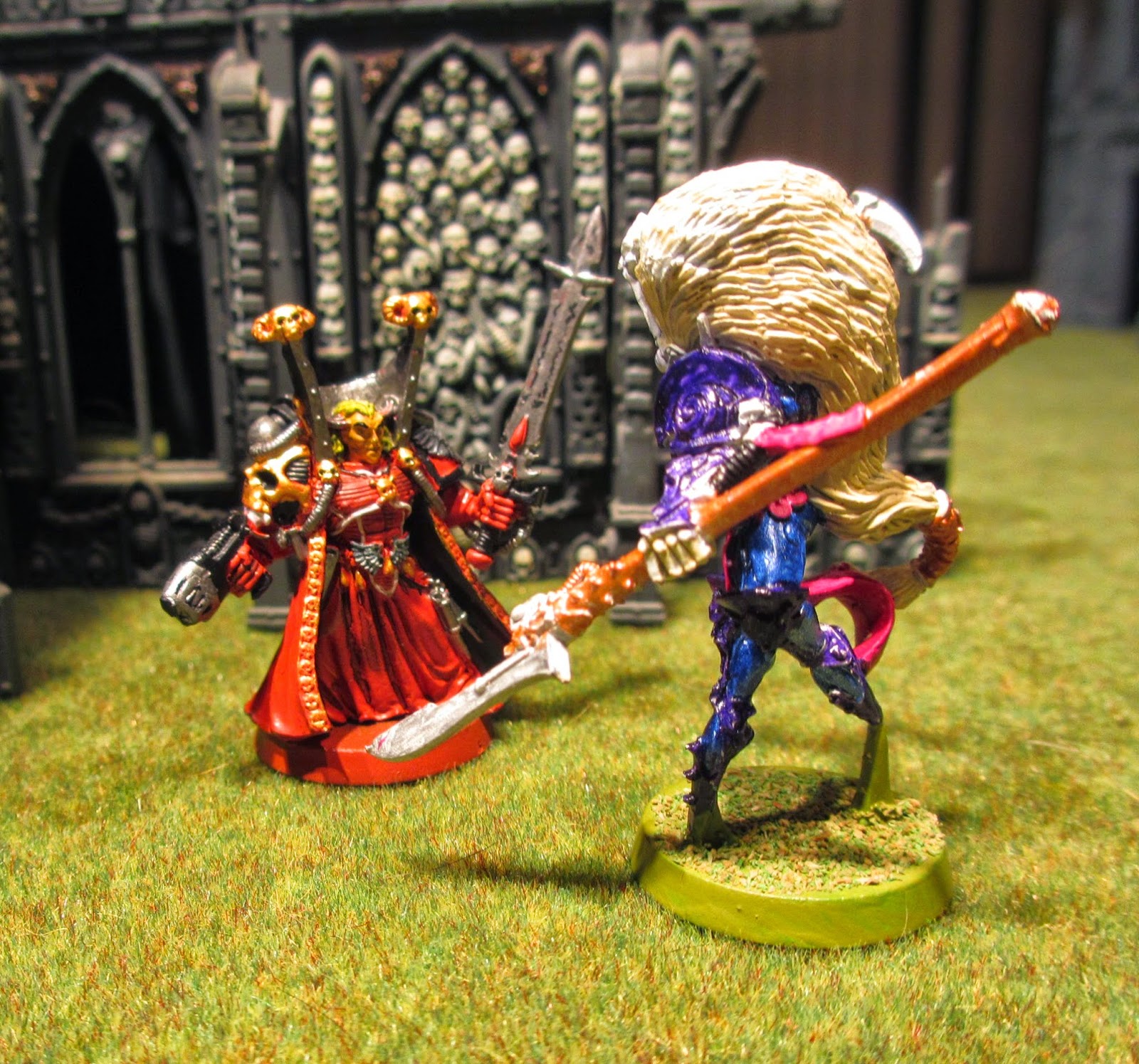 Jain Zar managed to avoid Grukk's quick end, but still took a wound from the psychic onslaught before she got into close combat. She had difficulty in wounding the Blood Angel and ran out wounds well before he did.

The Furious Four
Only three matches left! Who will reign supreme!


Commander Faright vs. The Avatar of Khaine 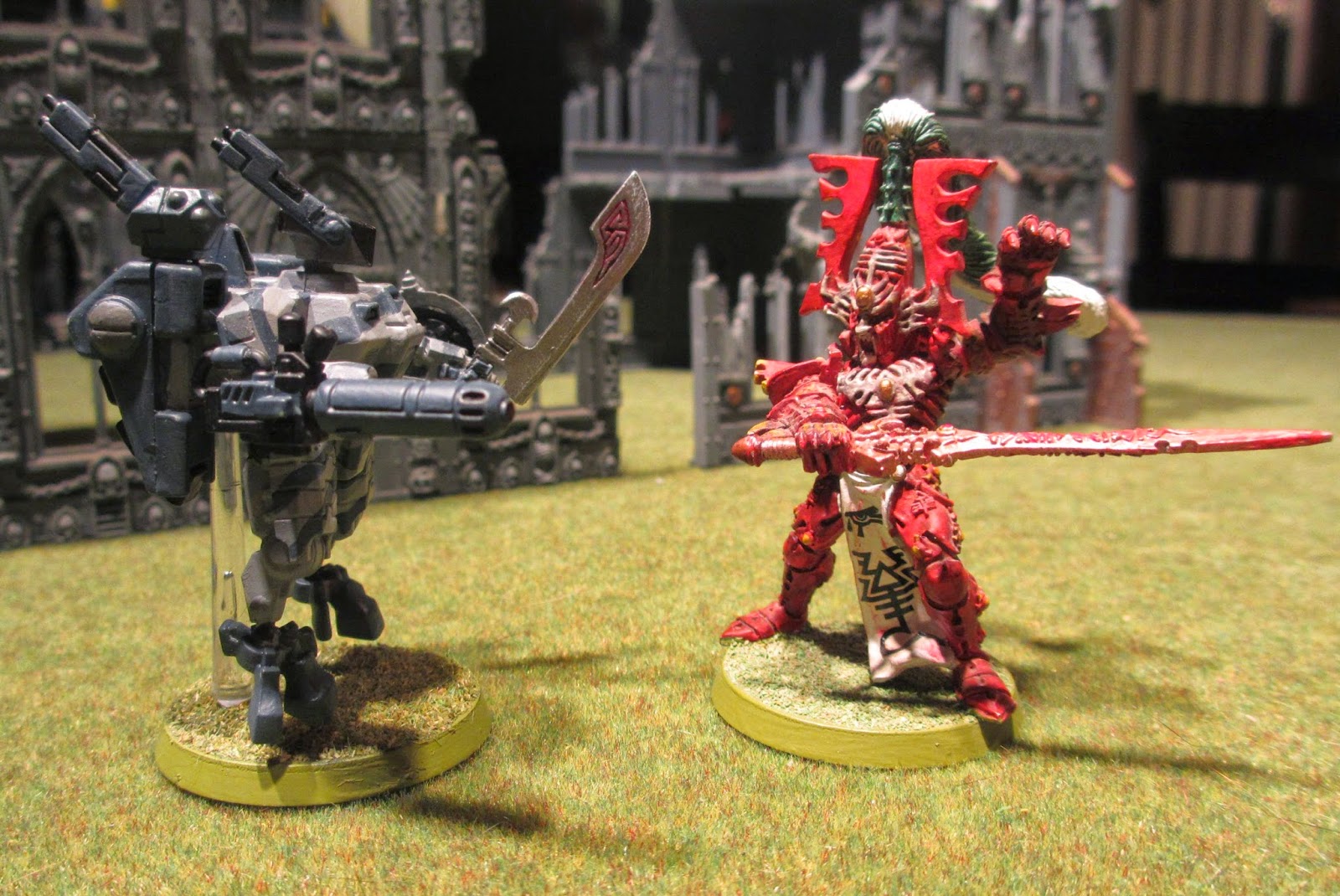 All hot streaks come to an end. Farsight put on a good run and gun show, wounding the Avatar twice. Then came the Wailing Doom and instant death.


Mephiston vs. The Swarmlord 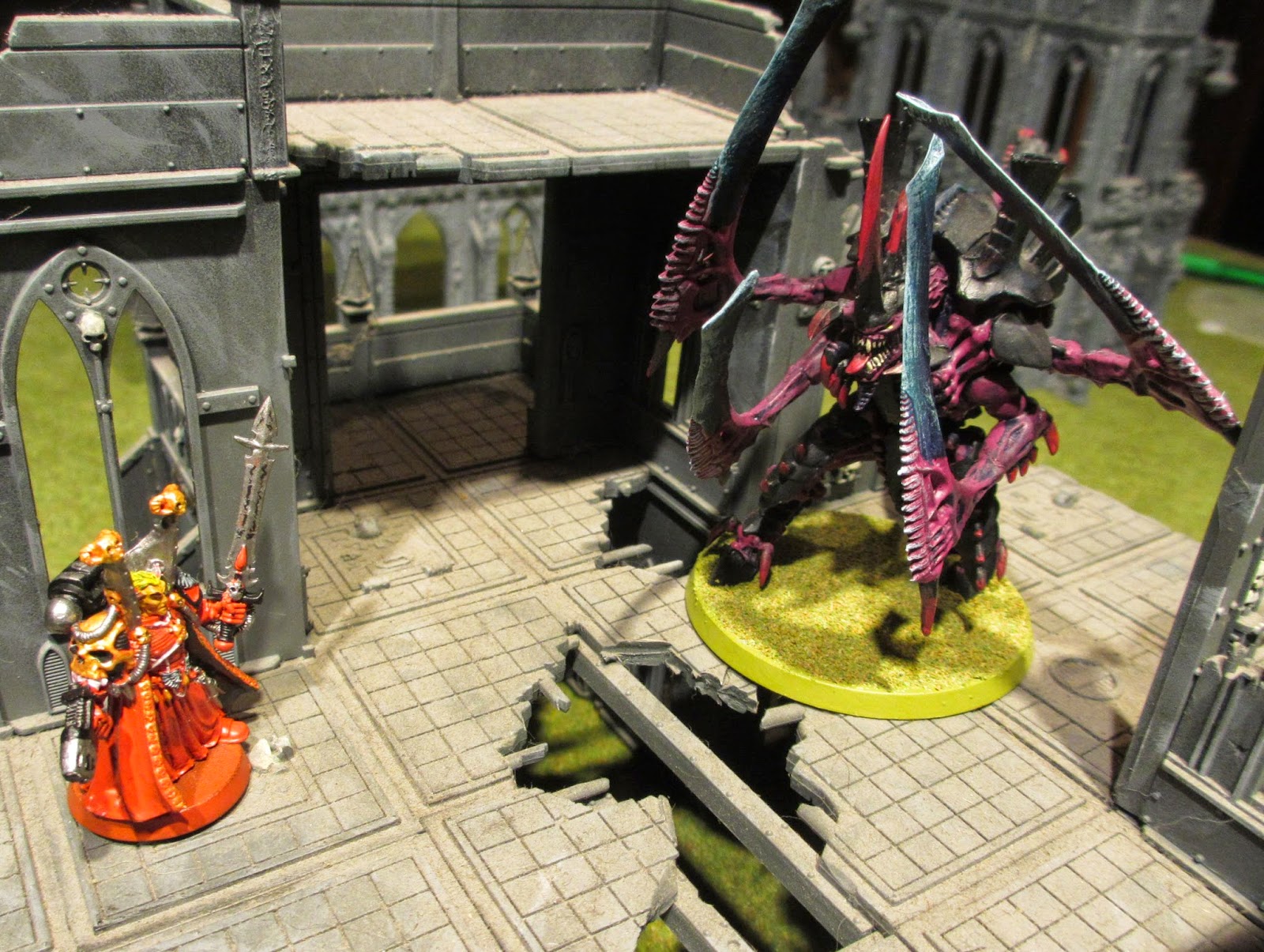 Mephiston took a wound before closing for hand to hand combat in the day's only psychic duel. In a very close battle the Swarmlord's  higher weapon skill and invulnerable save made the difference as Mephiston was bested.

There can be only one!
I can't say I'm terribly surprised by the final two combatants. Both are monstrous creatures with a lot of wounds. But which one shall emerge victorious?

The Avatar of Khaine vs. The Swarmlord 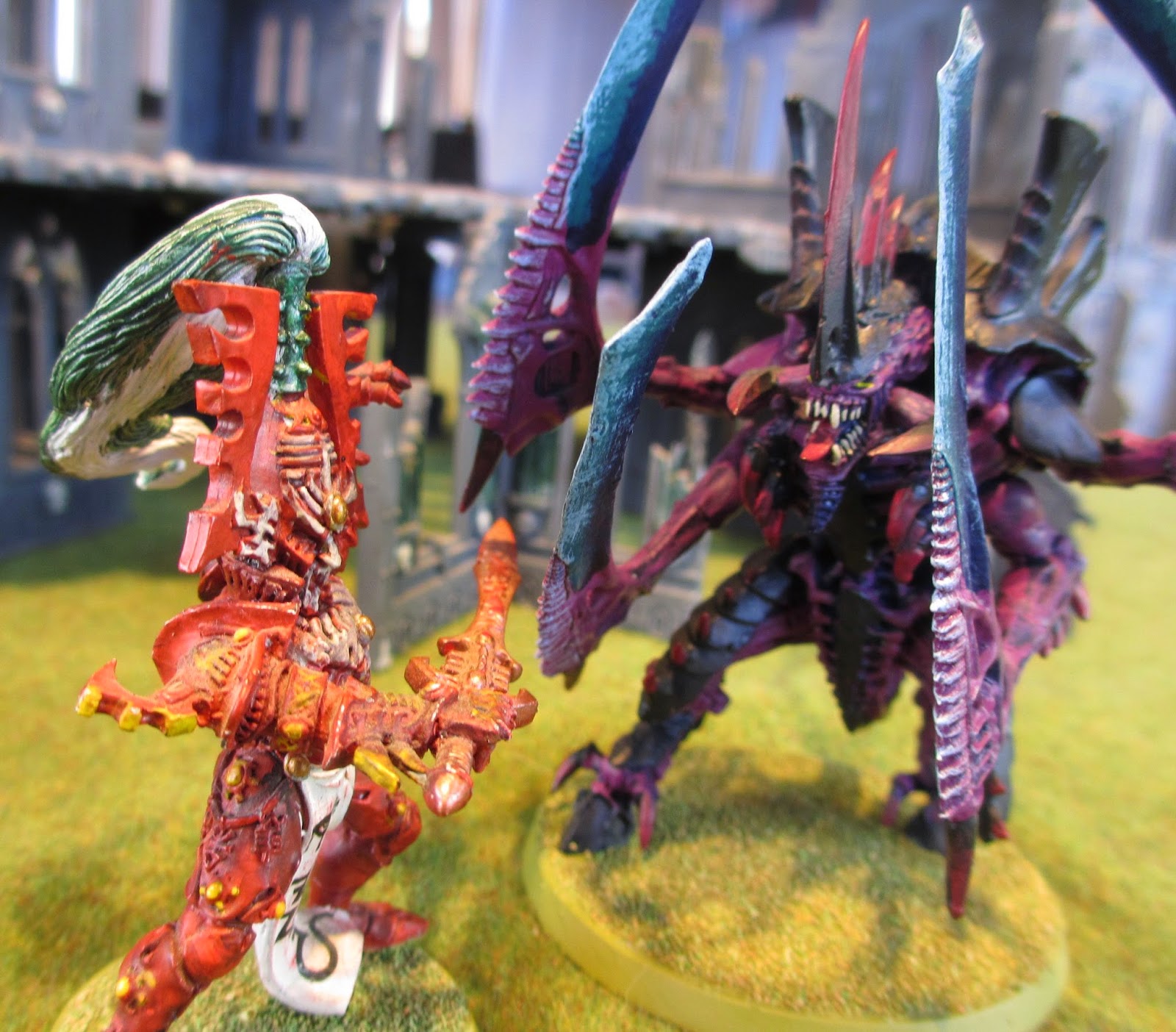 It's alway nice when you save the best for last. This was a titanic grudge match. No wounds where taken before they engaged in close combat. Both combatants lost a wound apiece for first three rounds of battle, then the Avatar pulled away with a savage flurry of four wounds inflicted, and only two parried. Down went the Swarmlord.


Arena of Death was a very good time, and a nice change of pace for a multi-player battle. Many thanks to my fellow Warlords for making the event a lot fun. I have some ideas to improve the selection process, and what other characters to add. We will do this again next year. 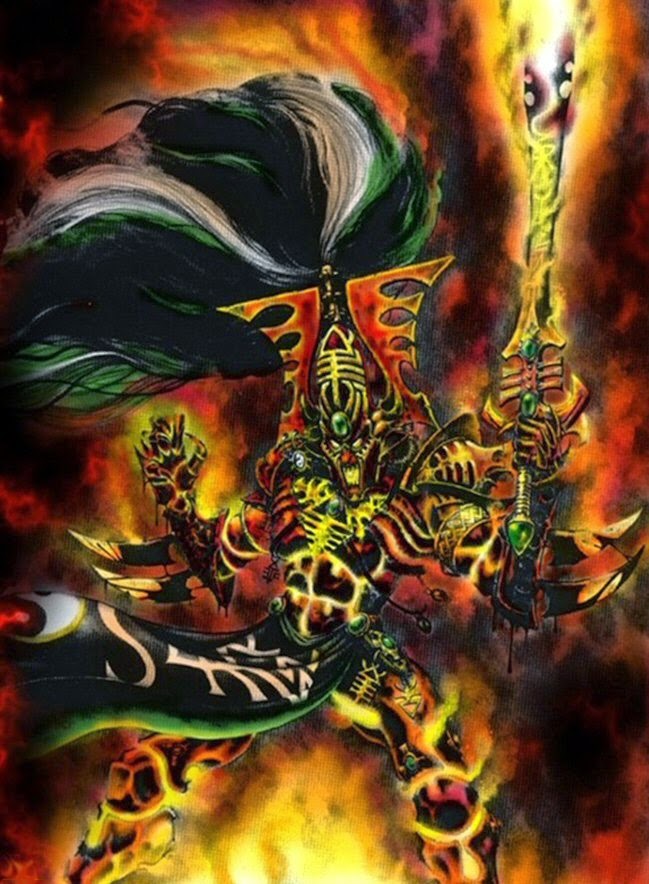 I walk again, a god among mere mortals.
-The Living Avatar of Kaela Mensha Khaine 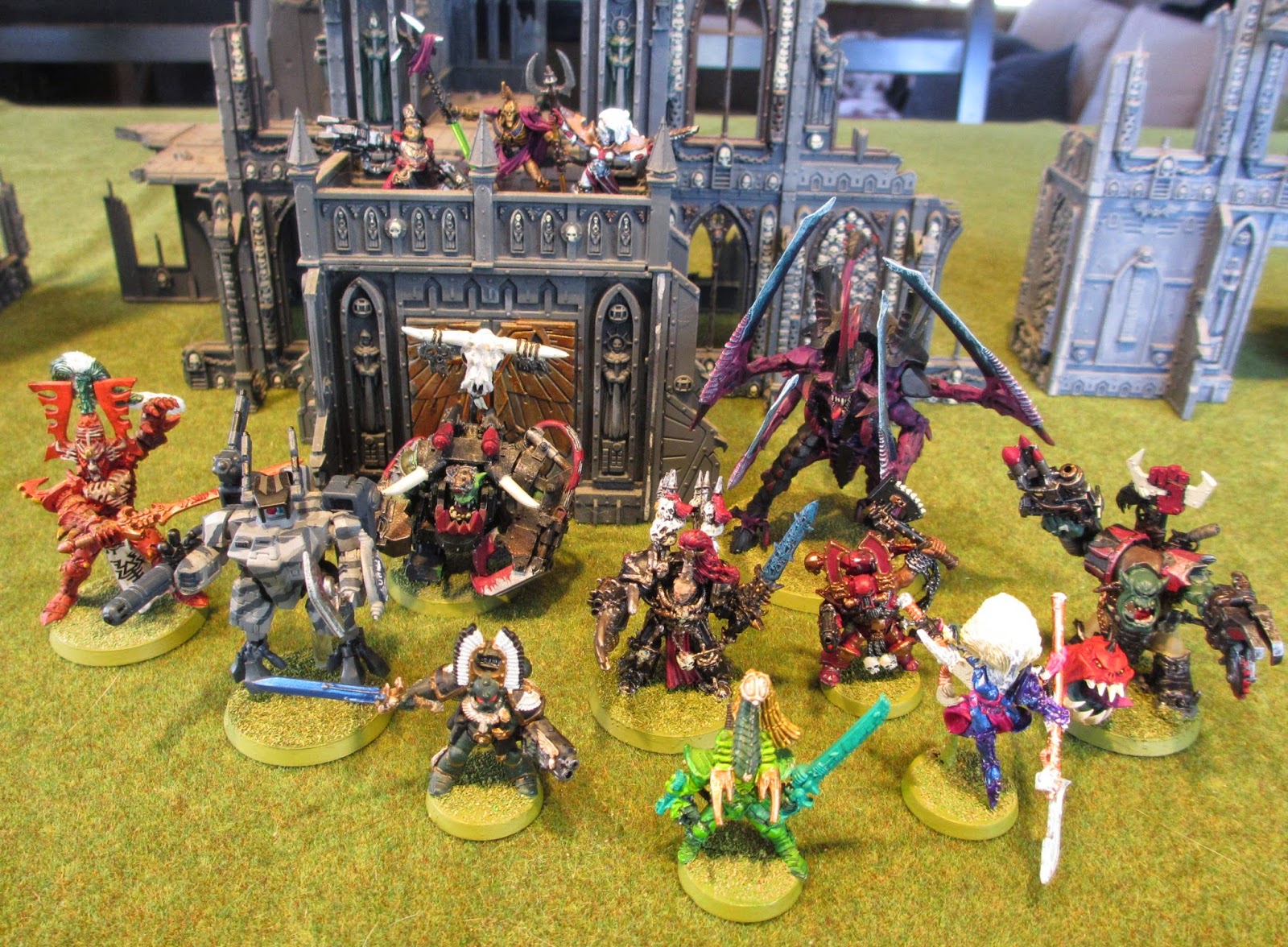 Sixteen killer characters of the 40K universe converge in the Arena of Death to find out whose combat skills are supreme! After picking the participating characters the initial matches were randomly drawn. Then the fun began. 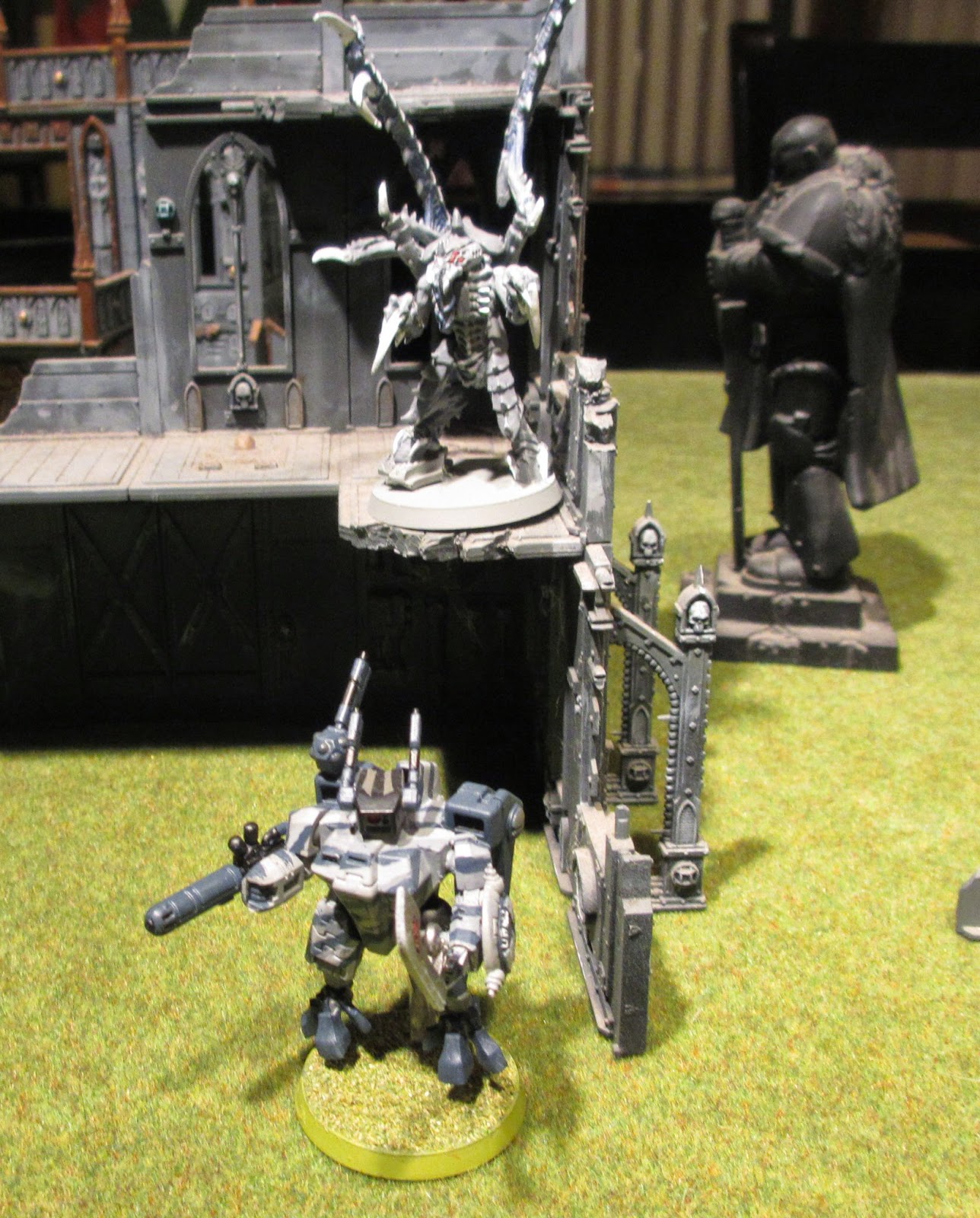 Farsight danced around for a bit in his fancy battlesuit, but Deathleaper was able to close and charge. Deathleaper scored a bunch of hits and a few rends but Farsight's armor would not be breached, he did not fail a single save. Deathleaper was whittled away and fell on turn three. 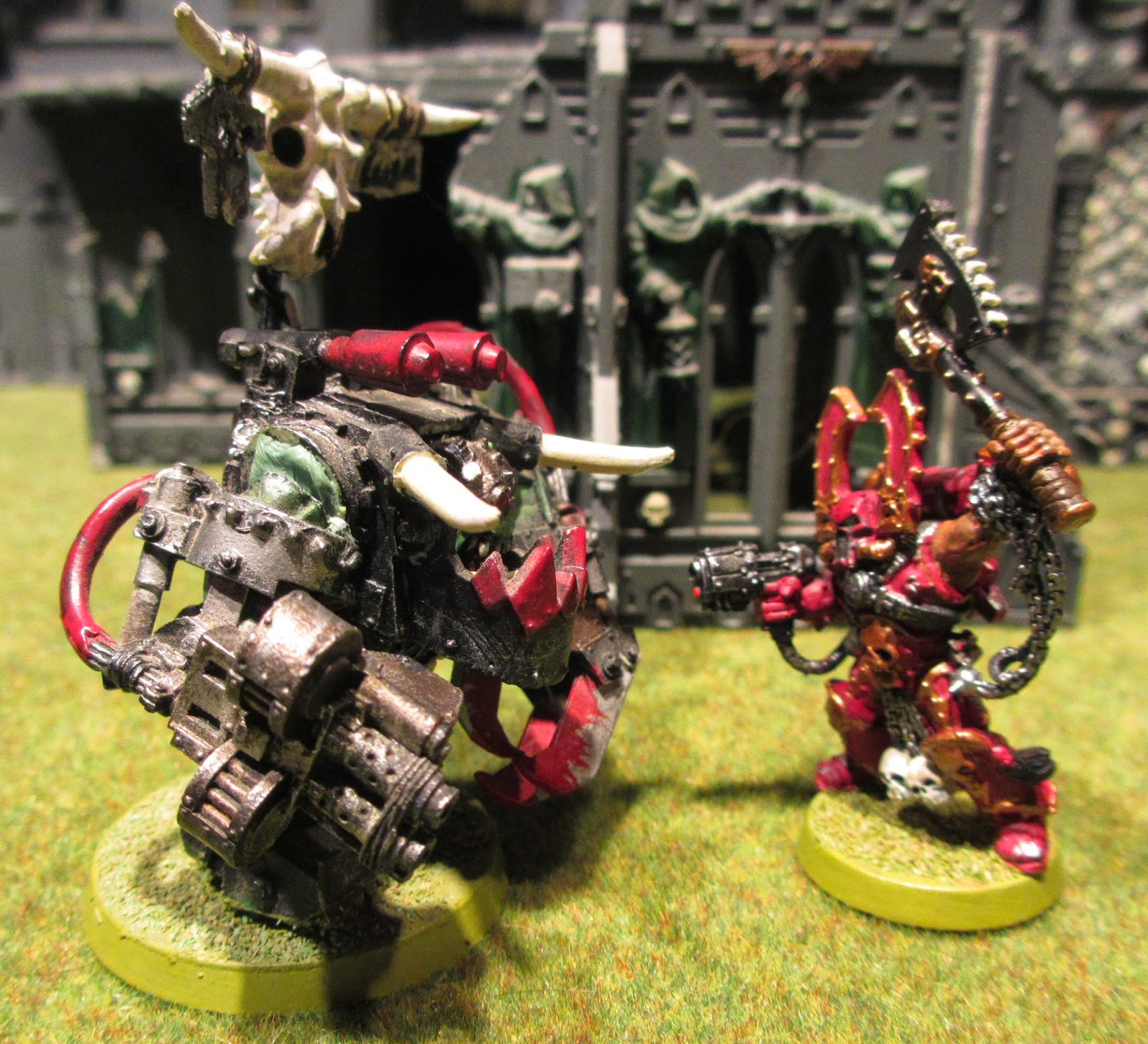 Two opponents not known for subtlety charged each other straight away. The Mighty Ghazghkull didn't get an attack in before being carved up by Kharn at the top of turn two.


Lord Dante vs. The Avatar 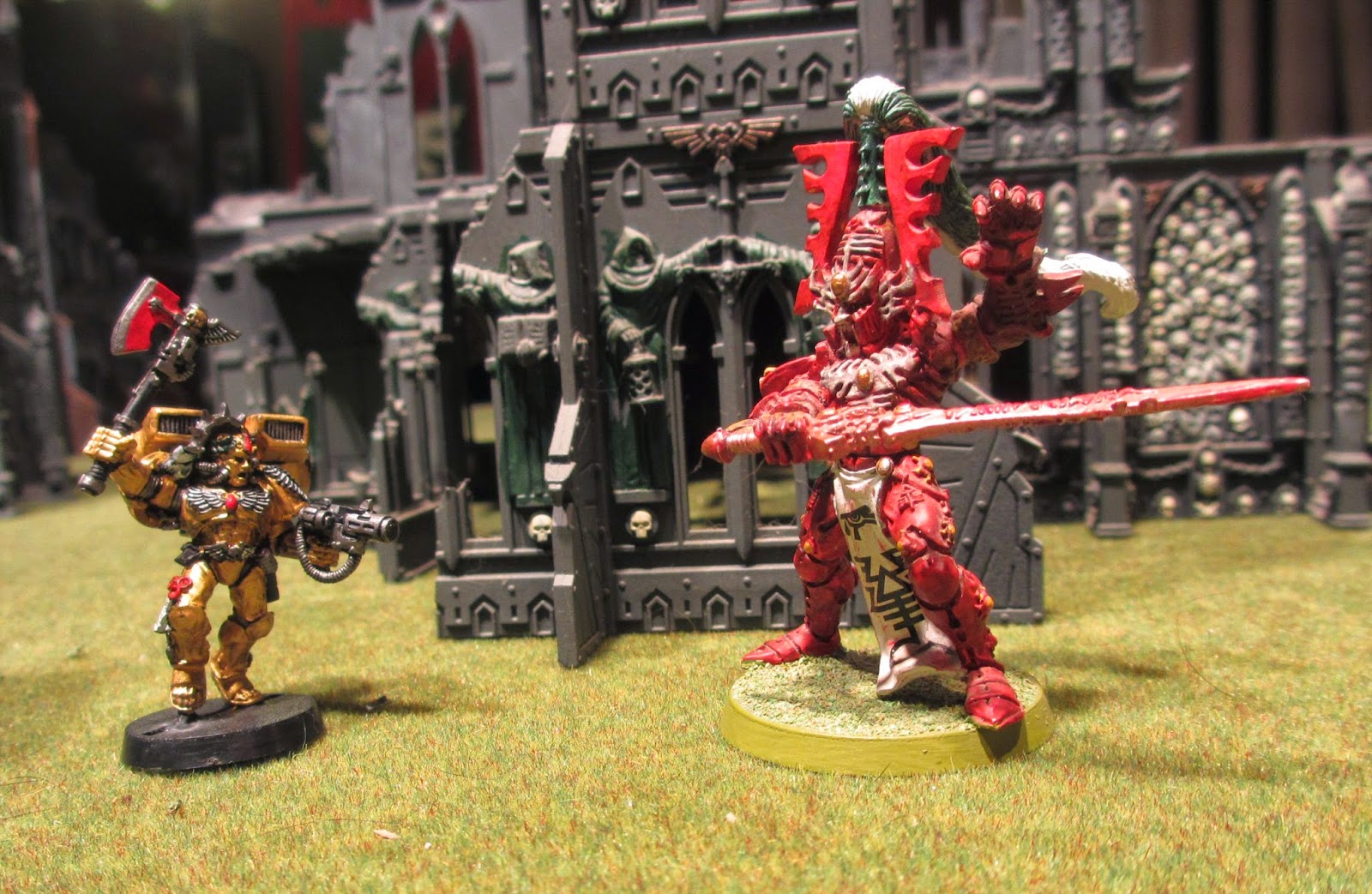 Dante had trouble wounding the Eldar Demigod of War and that led to Dante's demise on turn three. 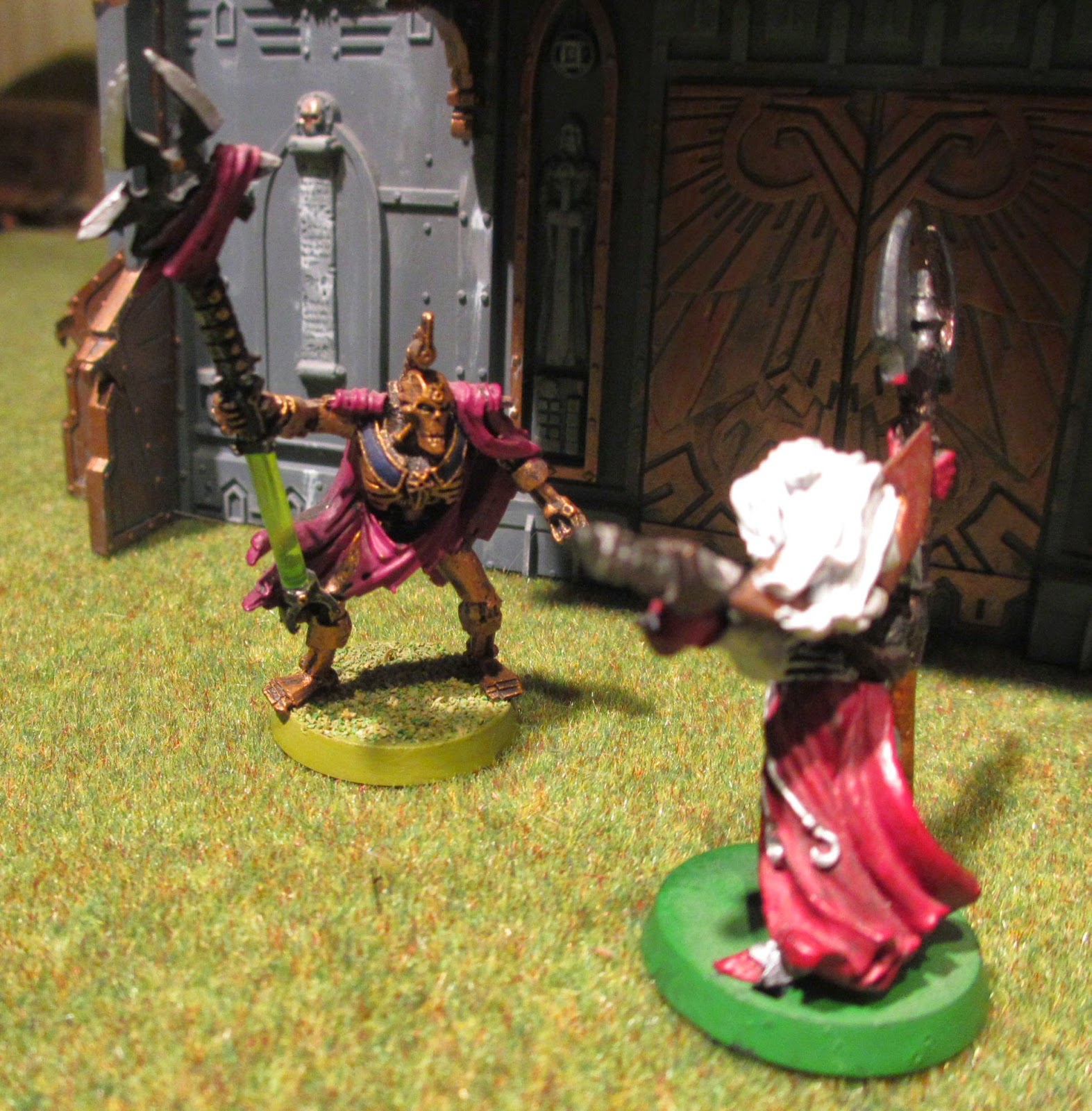 Anrakyr had a chance to end the match during the first shooting phase, but Lelith dodged the Tachyon Arrow. She danced into close combat with a impressive ten attacks, she only managed to score two wounds before suffering instant death from Anrakyr's Warscythe. 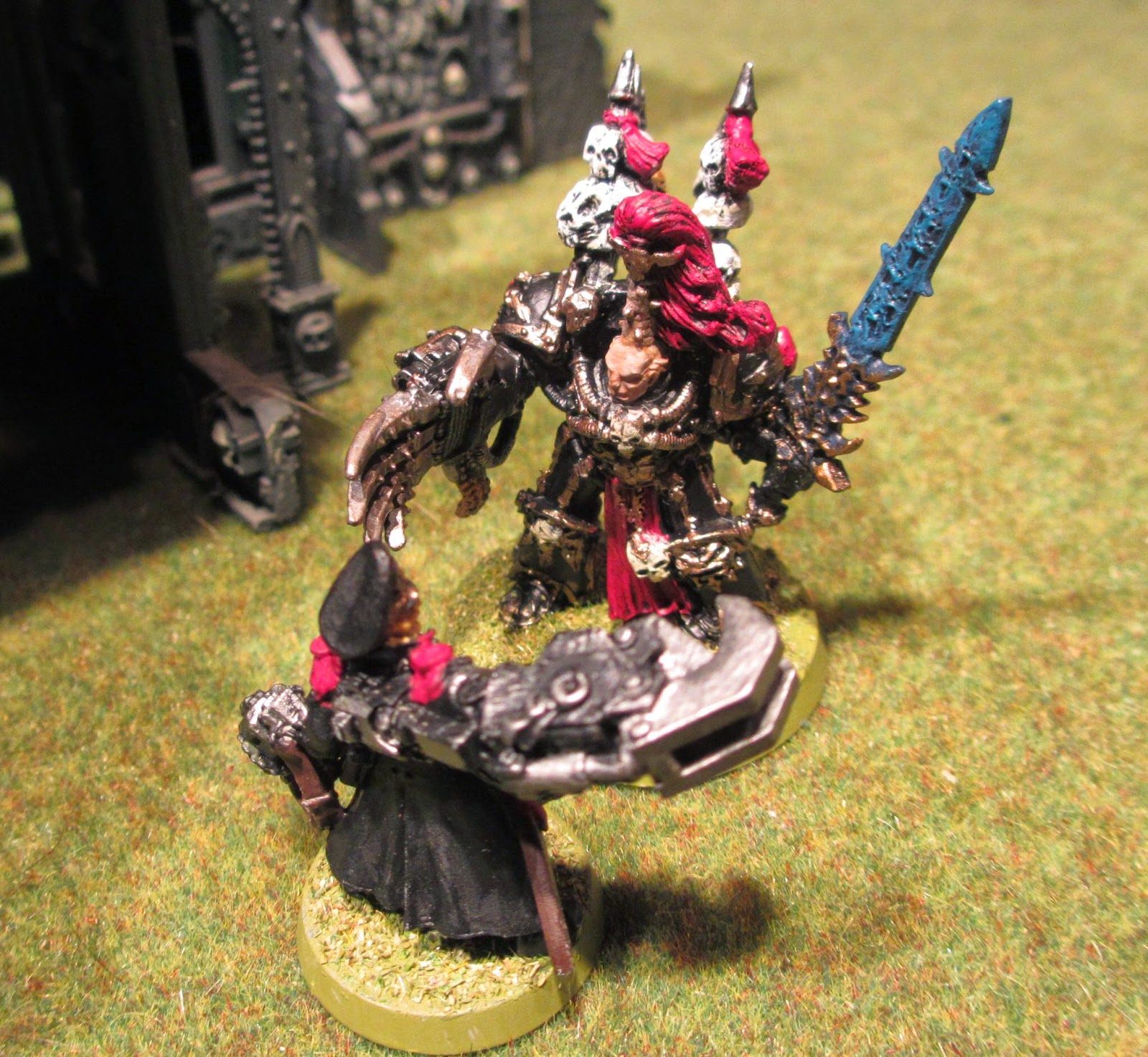 The Old Commissar was a bit outmatched by the Arch-Heretic and was killed in the first round of close combat. Then got back up. And was killed again. And again. And again. Yarrick seldom lived long enough to attack Abaddon, but he kept making his Iron Will roll to get back up. After eight rounds of combat we called the match in Abaddon's Favor. Abaddon scored twenty-five wounds to Yarrik's one. 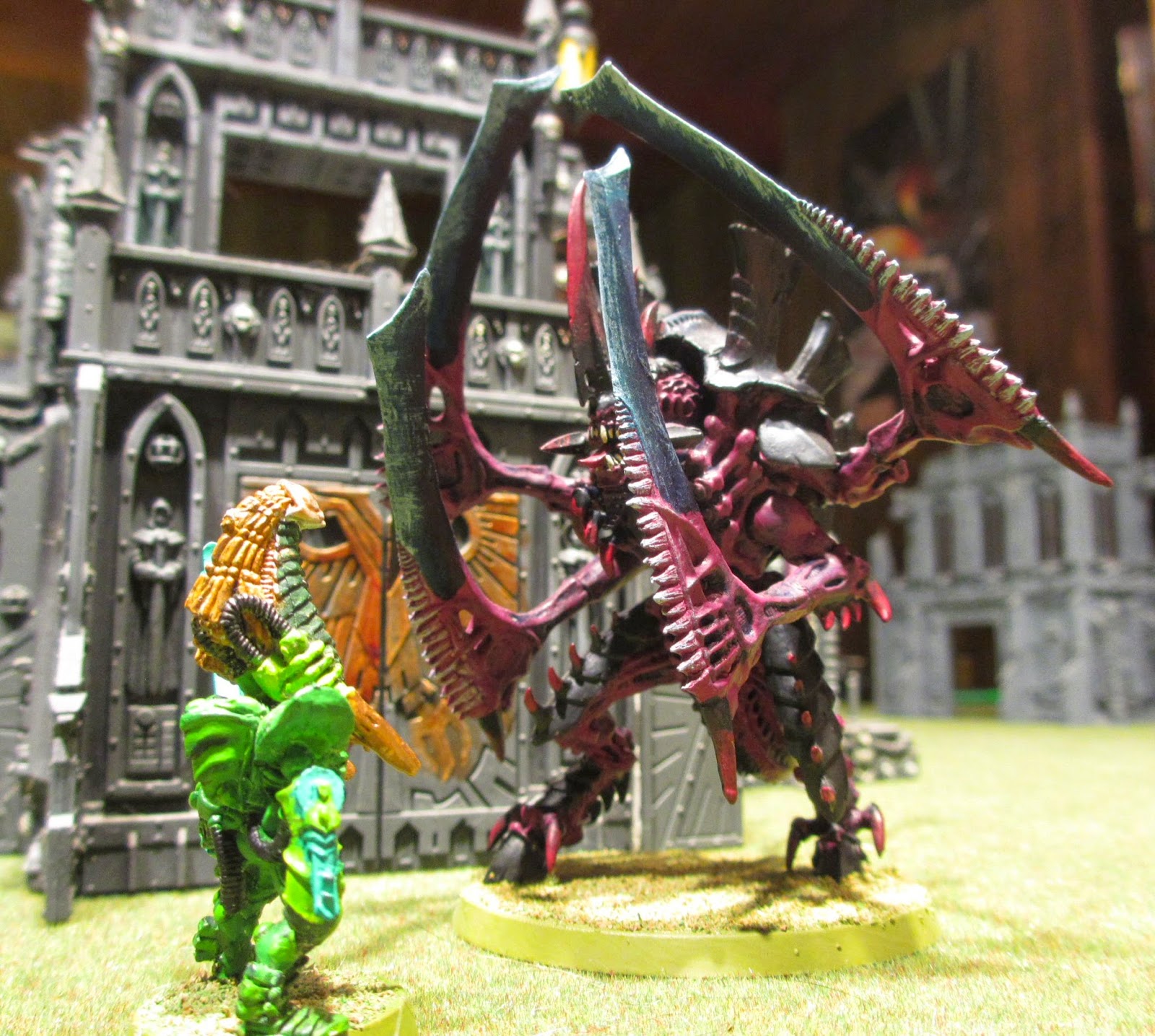 Karandras charged the Swarmlord, and the two exchanged blows in a brutal well-matched slugfest. Ultimately it was the Swarmlord's invulnerable save and Karandras lack of one that was the difference, and the Phoenix Lord fell. 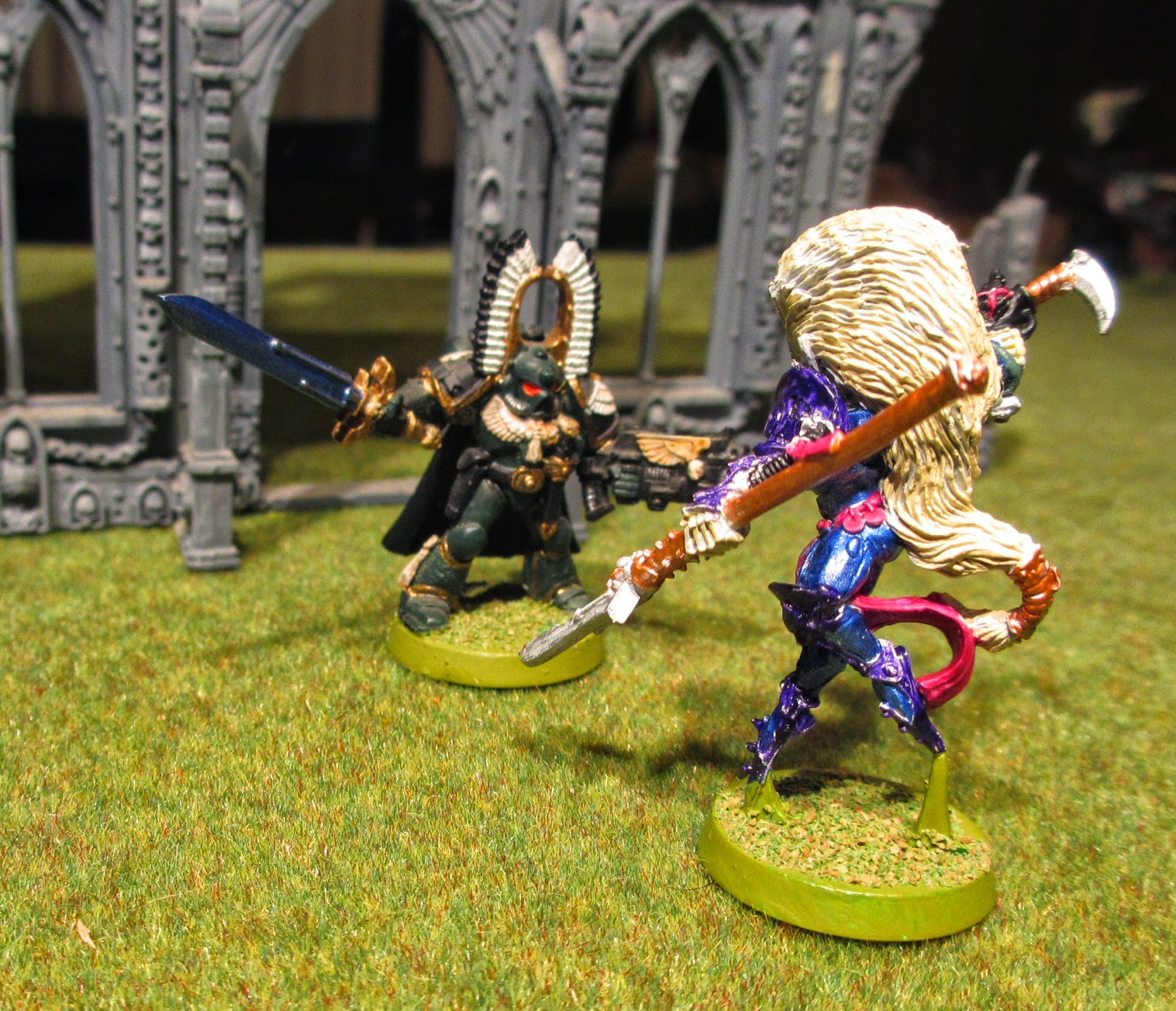 Azrael started off very strong by scoring two wounds on Jain Zar with his plasmagun. Sadly for the Dark Angel Lord, the Sword of Secrets is only AP3. Jain made ten of her 2+ armor saves and wore down Azrael in four rounds. 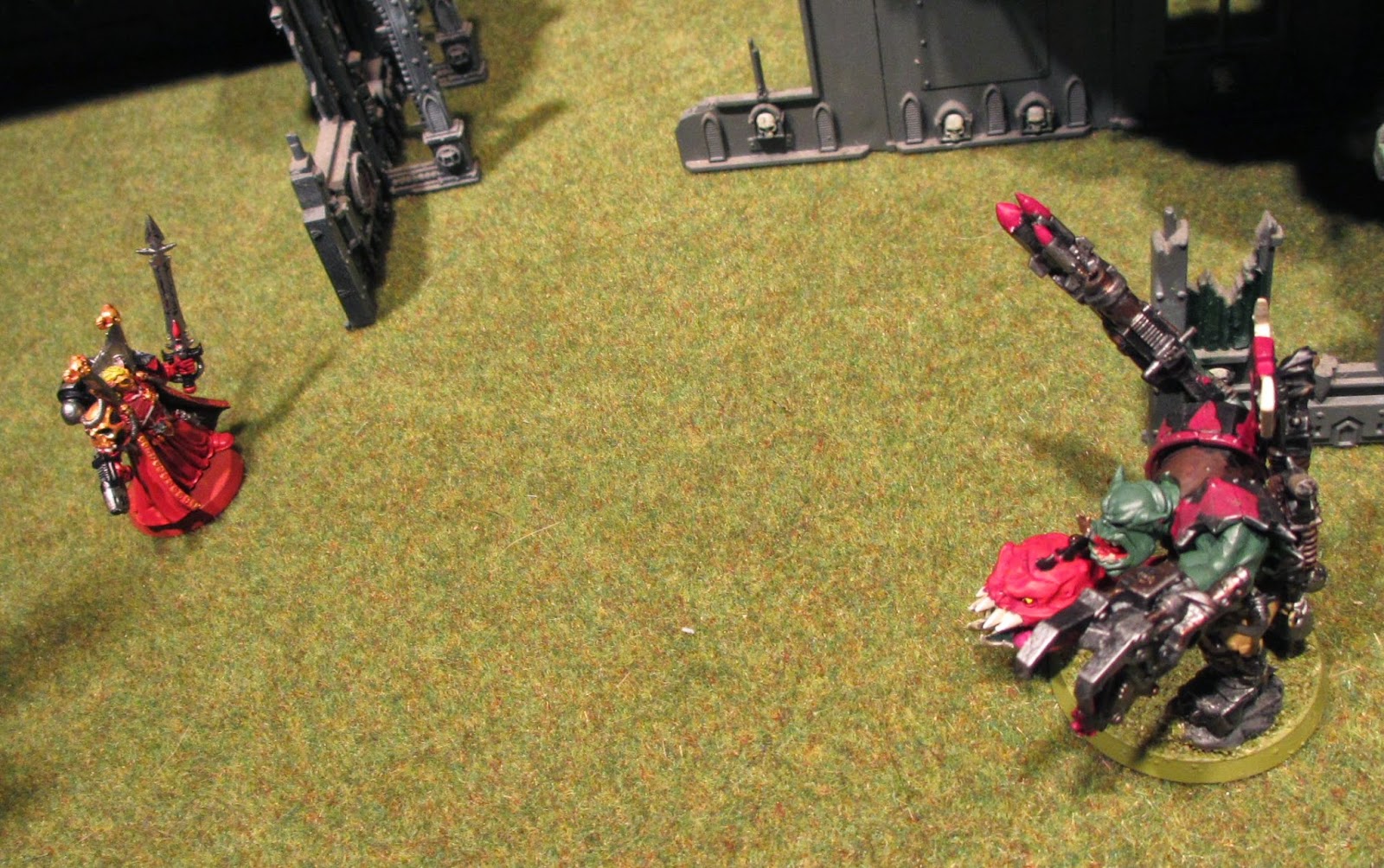 In the shortest battle (half a turn) Chief Librarian Mephiston used his psychic might and turned Grukk inside-out.

Eight exciting and fun matches in the first round. A few lopsided match-ups, and some awesome dice rolling, both good and bad.

Next up: the Arena of Death finals!


The Emperor Protects
But who will be his favorite?

Posted by Marcus the Blackheart at 2:48 PM 2 comments: