Can I Play with Madness?

Mansions of Madness (2nd Edition) is another great product from Fantasy Flight Games. It is a 1920s era Investigators versus Lovecraftian Horrors board game. With miniatures and a app for a game master. 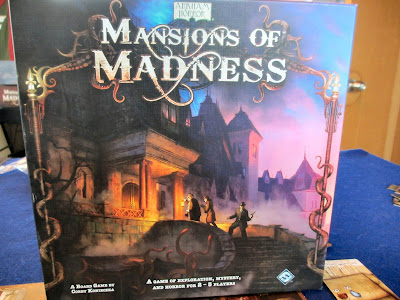 The first edition of this game came out a few years back and was liked by a very small dedicated fan base. I was disappointed in it. I kinda wanted a Call of Cthulhu dungeon crawler with some mystery solving. Which it sort of was, but there was fixed, detailed adventures that required the GM to do a lot of set-up work. If there was a minor mistake during setup it would ruin the adventure. I found the game too fiddly, slow and too much work and not enough fun for the GM. So on the shelf it went.

Second Edition fixes all of that by giving the GM's job to a computer. I must say I was very skeptical that this would work, but it does work. Now Mansions of Madness 2ed is a co-op 1-5 player game. You do have to have a tablet handy (Or on a laptop via Steam) to run the app. 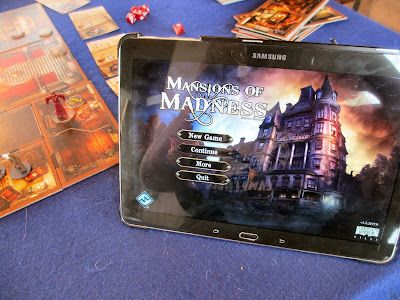 The app does a good job of handling map reveals, objects, random events, and stuff of that ilk. All the action still happens on the gaming table. Moving figures and monsters, dice rolling and keeping track of your character's physical and mental health is still the player's job. It launched with four scenarios and now it is up to six, with more on the way. Each adventure has some variants in map layout and monsters, so it is not exactly the same every time you play.

The first edition maps, monsters, and investigators can be used with the newer version, which is really nice for those of us who held on to it. For those who didn't pick up the first edition and its expansions, FFG is selling those as 2nd Edition packs. Lots of support right away for this game, and more to come.

Let us talk about the miniatures for a moment. The sculpts are okay for game figures, but the large, clunky, square bases are just the worst. Like with Imperial Assault, the grey figures looked sad against the fantastic artwork on the maps,  So I did want any (in)sane Cthulhu fan would do, paint the figs and re-base! 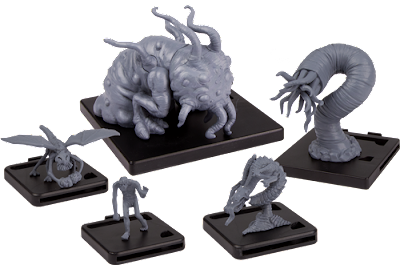 I decided to go full boat crazy and use clear bases for the monsters. I had thought about that for the investigators, but their bases where small, round, and looked fine for the figs. Plus I didn't really want to try and cut off those tiny feet. I am very happy with the end results. 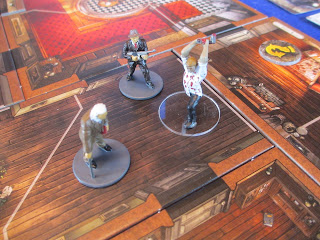 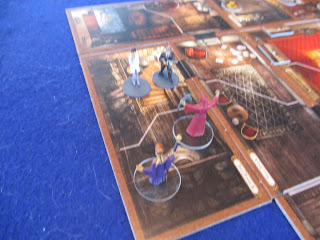 I have talked to some people who question "Why the app? Why not just make it into a computer game?" For me, it is because I enjoy the social and tactile interaction of a boardgame. I like being a GM, but sometimes you just want to be a player in the party of investigators and to share that experience. In this example, it allows everyone to do just that.

Having an app take over the GM role is novel, and does add to the air of mystery and surprise to the game. It also allows for some puzzle-solving that is done on the tablet. There are, of course a few quirks with the app, but overall it works well. Is computer assisted games the future? For some games I think so. It definitely works for Mansions of Madness,


Go Roll Some Dice
And try not to go Mad

Posted by Marcus the Blackheart at 1:17 PM No comments: 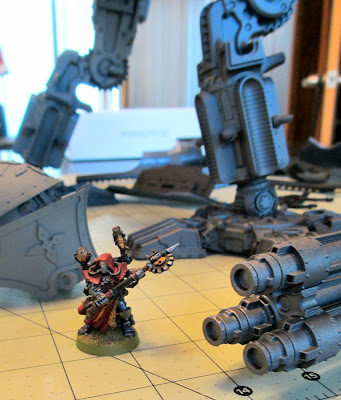 No dramatic progress to show off. Lots and lots of priming, some test fitting of the big subassemblies, and a whole lot of over-thinking the paint scheme. 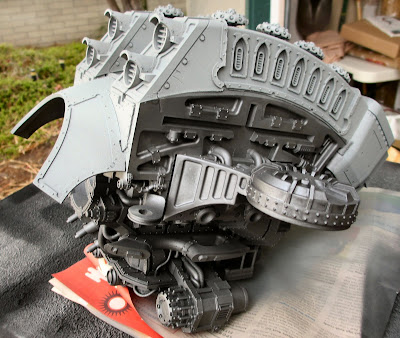 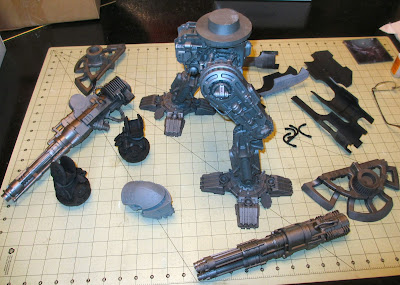 The Testors Titanium Metalizer spray paint  looks great over the black primer. I did the guns with Leadbleacher spray for some variance in the bare metals. All of the armor plates have been back-painted black and I have started to do detail paint on the legs.

As for the main color, I have been testing a few different shades of grey. I'm making this titian as one from the Legio Gryphonicus (War Griffons) Of course this means I'll have to repaint my Warhound to match, but it's a small price to pay for awesome. 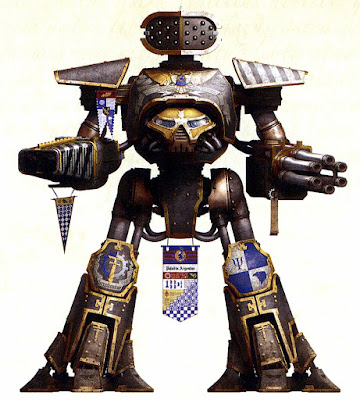 This is (mostly) the scheme I am going for. Mid-grey kinda color. Gold trim with a white, (maybe red) head. At the moment I am favoring Tamiya Haze grey as the main color. It'll be fun.


The Emperor Protects
Even against runs and overspray
Posted by Marcus the Blackheart at 1:41 PM No comments:

Walking Dead All Out War 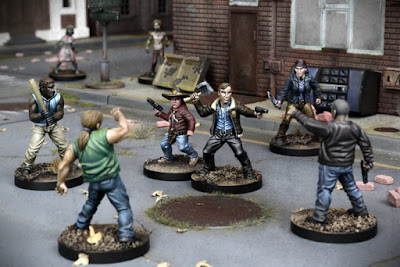 Today is something different. Mantic Games is having a contest and I was selected to be in the finals of it. They graciously sent me a retail copy of their new Walking Dead All Out War miniatures game to do a unboxing video of. Whoever of the finalists video get the most watches wins a big Walking Dead prize package.

So, here is my first attempt at making a video, please give it a watch. Feel free to offer any constrictive notes, for I know there is much room to improve.


The game does look fun, and I will have a review of it soon. Titan update on Monday. 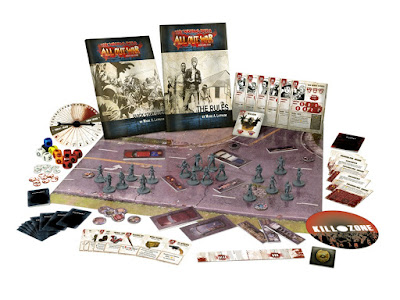 Go Roll Some Dice
'Tis the Season for Killing Zombies
Posted by Marcus the Blackheart at 1:17 PM No comments: 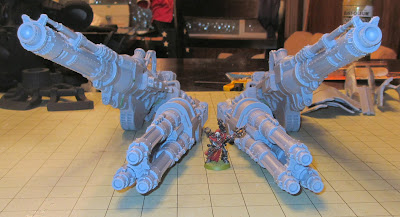 Ahh yes, the raison d'être for the Warlord Titan. Very heavy weapons and lots of them. I was a bit torn on the weapons loadout, I think for the shoulder weapons missile pods have great utility and can wipe out entire units of infantry, but I like big guns and I cannot lie. Triple Turbo Lascannons would be my choice for the "secondary" weapons.

Arm weapons, I want the classic Defense Laser (Volcano Cannon to you kids) and Gatling Blaster combo. Alas, Forge World doesn't make a Gatling Blaster yet. Soon, I hope. I have a few ideas in decreasing order of sanity for a gatling Blaster arm, but more on that later. The Plasma Destructor and Power Fist don't really do anything for me, so I went with a pair of Big Honkin' LaserGuns. 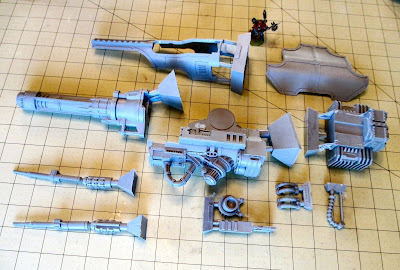 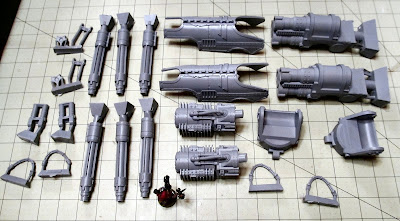 First the usual, cut, trim, bath. A little bit of re-bending in boiling water, nothing too bad. All went together pretty well. The triple turbos had a moment of frustration when putting the three barrels together, but it was overcome with a few choice oaths and strong drink. 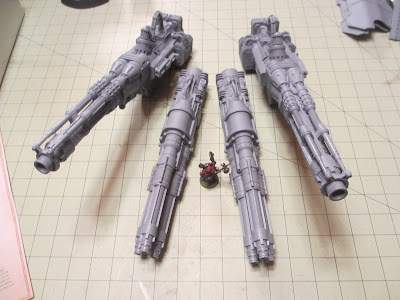 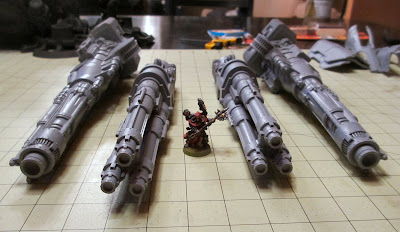 Just because I wanted to be done with the cut, trim, wash cycle I also prepped the cockpit. 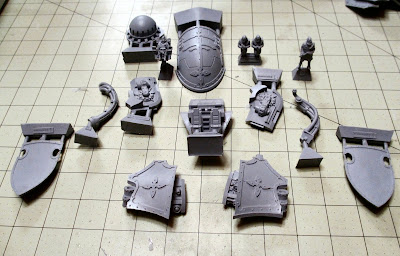 So this marks the end of all sub-assemblies. Getting all them to fit together with be a thing.
Next up: Time for a whole bunch of paint.


The Big Guns Never Tire
As Long as the Epoxy Sets

Posted by Marcus the Blackheart at 12:01 PM 3 comments: