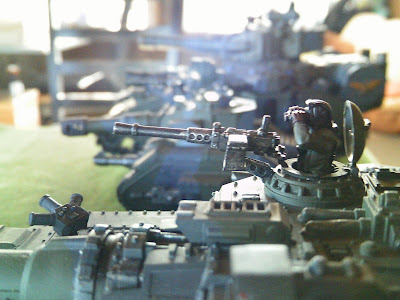 After a string of victories the Armageddon 23rd pushed towards the last remaining hive node and spawning pits on Zircon III. ﻿Heavy units of the 1st company "The Emperor's Reapers" engaged the remaining monstrous swarm backed up by a Heirodule. 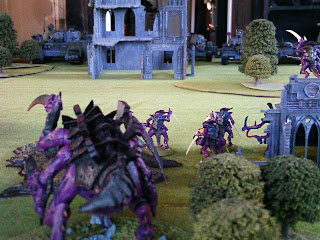 The 1st company sustained heavy losses but the combined firepower of a Shadowsword and Baneblade broke the back of the Tyranids. The hated Heirodule took three turns to put down, but down it went in a hellish glare of superheavy weaponry. The Imperial forces have claimed victory in this campaign after 15 hard fought battles (including two Apocalypse) the final tally is Imperial 8, Tyranids 7.

There were a few battle reports I didn't have the time to write up and my camera is on the way out, and the cheap back-up tends to produce nice looking shots on the LCD screen only to find they are blurry when I download them. So here are a few of the pics from the battles along the way.
﻿
﻿﻿﻿

﻿﻿
﻿﻿﻿﻿
﻿﻿ ﻿﻿Thanks to all the Warlords for a fun campaign!
Next up we will start the long fabled No Power Armor League.
Posted by Marcus the Blackheart at 11:53 PM No comments: 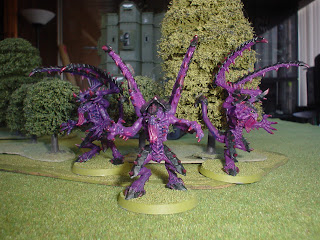 ﻿﻿﻿
﻿Lictor. One of the iconic Tyranid creatures, a master infiltrator, pathfinder for the Swarm, and a peerless killer with lighting fast speed. I want the stats to reflect this once again. Starting with it's debut in 1995 the Lictor was a bit of a boogyman. It would pop out and murder a squad then be put down in a hail of gunfire. Fine, but the current rules for it have it poping out and then getting shot up before it can even move or assault. I went through all four editions of the Tyranid Codices to make the Lictor of my nightmares.
So here are our current house rules for the Lictor. I'm am only listing changes or additions to the current rules.

Preternatural Reflexes: The Lictor receives a 4+ invulnerable save to all attacks.

Cameleonic Skin: Lictors always start the game off-table. At the start of any Tyranid shooting phase the Tyranid player may place any number of off-table Lictors onto the board. They may be placed anywhere that is more than 6" from any enemy model. If the Lictor is placed inside a piece of terrian it may be up to 1" away from an enemy model. Lictors may shoot or fleet and assault on the turn they arrive.

Pheromone Trail: Each Lictor taken allows the Tyranid player to re-roll one Reserves roll per turn regardless of whether the Lictor is in play or not.

We have playtested these rule changes five times now, and they work very well. The 4+ dodge seems overpowering but it isn't in practice. I would like feedback on these house rules if you try them out.
Good Hunting! 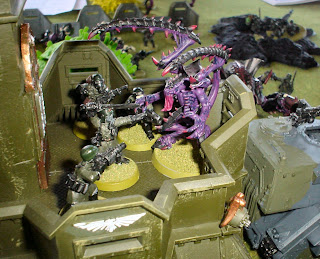 Posted by Marcus the Blackheart at 3:55 PM 2 comments: