I managed to force some painting time into my overloaded schedule and I am happy with the result. I've said it before, I'm a gamer, not a painter. It only took three tries to find the right paints I used on the rest of my Tau army. I should have written that down somewhere. I have a battle against Matt's Tyranids later tonight so I will get to try out the Riptide for the first time.

I assembled the lone Broadside I was able to get, and sadly, I really like it. Now I need two more. The kit went together really smooth. I am a little sad that unlike the Riptide, there is really only one pose. I can live with that. Twin plasma rilfes or smart missile system, three head choices, a few different antennae/sensor thingies, a shoulder-mounted seeker missile, and two drones of three types give the kit plenty of options.
The new Broadside has a heavier feel to it, like it is a dedicated heavy unit and not just a normal Crisis suit with heavy weapons added. It is a great update to Tau the line.
Next up, battle report, Tau vs. Tyranids.

For the Greater Good
With Greater Battle Armor
Posted by Marcus the Blackheart at 11:40 PM 2 comments:

Like so many others in our little hobby, I love killer mecha. Which is one of the reasons the Tau and their anime inspired battlesuits appealed to me. I got my hands on a XV104 Riptide on Saturday. And it is a really nice kit. Easy to build with lots of options. It looks great and is quite big.

I like the Riptide's name in different langues on the side of the box. XV104 Cataclismo has such a nice ring to it. After reading the New Codex I was torn on which weapon I would equip the Riptide with. So, I though, what would a crazy person do? Magnets! My first foray into the rare earth madness. 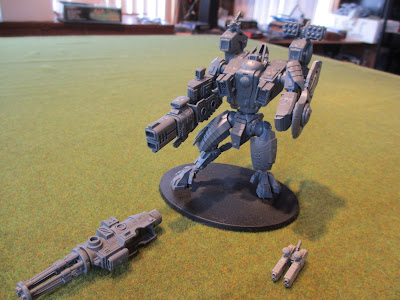 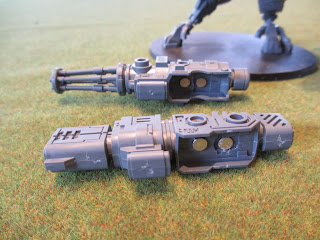 It was a pain, but well worth it. Fun fact, when working with powerful really small magnets, try to avoid mounting them close together. Like I did. Eventually. Taking a cue from Matt (whose magnetic insanity we will uncover later) marking one side with a red sharpie really helped, because those little bastards love to flip over at the worst time.
Time to go build the new Broadside suit. Without main weapon swapping.

The Emperor Protects
Just not from magnets

Posted by Marcus the Blackheart at 3:52 PM 3 comments: