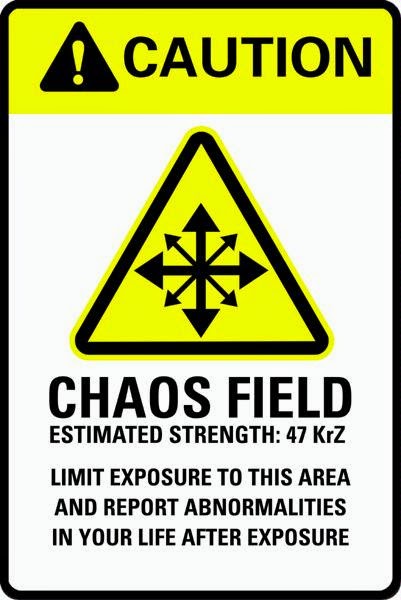 Today I bring you a guest article written by Arch-Heretic Peter:


I was paging through the Chaos Marine codex and something struck me.  It’s been gnawing at me for a while and I finally realized what it was a few days ago.  I think it’s a strong indication of why this codex—and the one before it—have been sort of lacking.

If I could, I'd like to bounce a storytelling idea off you.  And the best example of it would be Magneto, the X-Men’s recurring nemesis.  I think he makes for a great parallel.  If you aren't a big X-Men fan, Professor X and Magneto used to be allies.  They were friends who shared the same beliefs and goals.  But at some point, Magneto decided he needed to follow a different, more extreme path.  He became the villain of the series, and the arch-enemy of the X-Men.

So....why did Magneto decide to become a villain?

Well, that’s the interesting point.  He didn’t.  Magneto decided everyone else was doing things wrong and that he was going to start doing them right.  In his mind, Magneto is the hero while Professor X and his students are a bunch of well-meaning idiots who keep getting in the way.  Most good villains have this viewpoint.  They think they’re the good guy.  Look at any war in history.  Both sides believe they’re in the right, and it’s only afterwards that one gets declared “the villain.”

And this is true of the world of Warhammer 40,000, too.  Read any of the assorted Space Marine codexes and they'll tell you how they're humanity’s glorious protectors, retaking the stars in the name of the Emperor of Mankind.  But in the Tau codex, the members of the Tau Empire are the heroes, bringing a bold vision of peace and unity to the galaxy.  Same with the Eldar, the Orks... heck, even the Necrons come across as the heroes in their own Codex.  They're the original rulers of the galaxy, returned to reclaim what is rightfully, logically theirs from the immature races.  No matter what army I choose to play, I'm playing on the side of the heroes of the story. 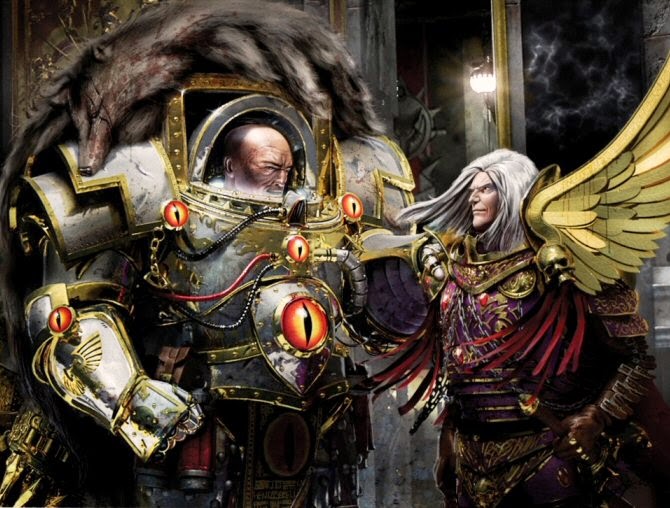 Take another look at the Chaos Marine Codex.  Check out the language of the book.  Really consider the words and phrases and how they’re used.

Look all the different events and stories on the timeline (pages 22-25).  These aren't tales of Chaos winning... they’re tales of the Imperium losing.  The codex doesn't talk  about the Chaos Marines versus the servants of the False Emperor.  It’s all about the Imperium versus assorted traitors.  The story of the Abyssal Crusade is fantastic, but it’s not a story about Space Marines switching loyalties to Chaos.  It’s the story of how Konvak Lann and the Vorpal Swords survived, were vindicated, and then exposed and killed the corrupt Saint Basillius.

Consider the descriptions for different entries.  Sorcerers.  Daemon Princes.  Chaos Marines. Cultists.  Spawn.  Heldrakes.  All of these make the point of saying (one way or another) that turning to Chaos is a mistake.  That these characters are doomed because of their poor choices.  Even the entry for Abaddon himself is slanted toward the Imperium and makes him out to be the great villain.  His own rulebook sees him as being on the wrong side.

Codex Chaos Marines is written under the assumption that the Chaos Marines are the bad guys.  It assumes they deserve to be punished.  Every bit of fluff is done from the point of view that the Imperials are the heroes.  It actually tells Chaos players that following the Powers is seen as a sign of weakness and inevitable failure.  And the rules reflect that.

Compare this to the old 4th edition codex, the one that still gets songs of praise from Chaos players.  The various stories are about the great Chaos victories.  The rise of mighty Daemon Princes and successes against the misguided fools who worship the corpse god.  This book is all about Marines who saw the light (so to speak) and decided to stop following the False Emperor.

Remember that phrase?  Death to the False Emperor.  Try to find it in the new book.  It’s mentioned in passing on page three, in the introduction, and then never comes up again.  Nothing even close to it. 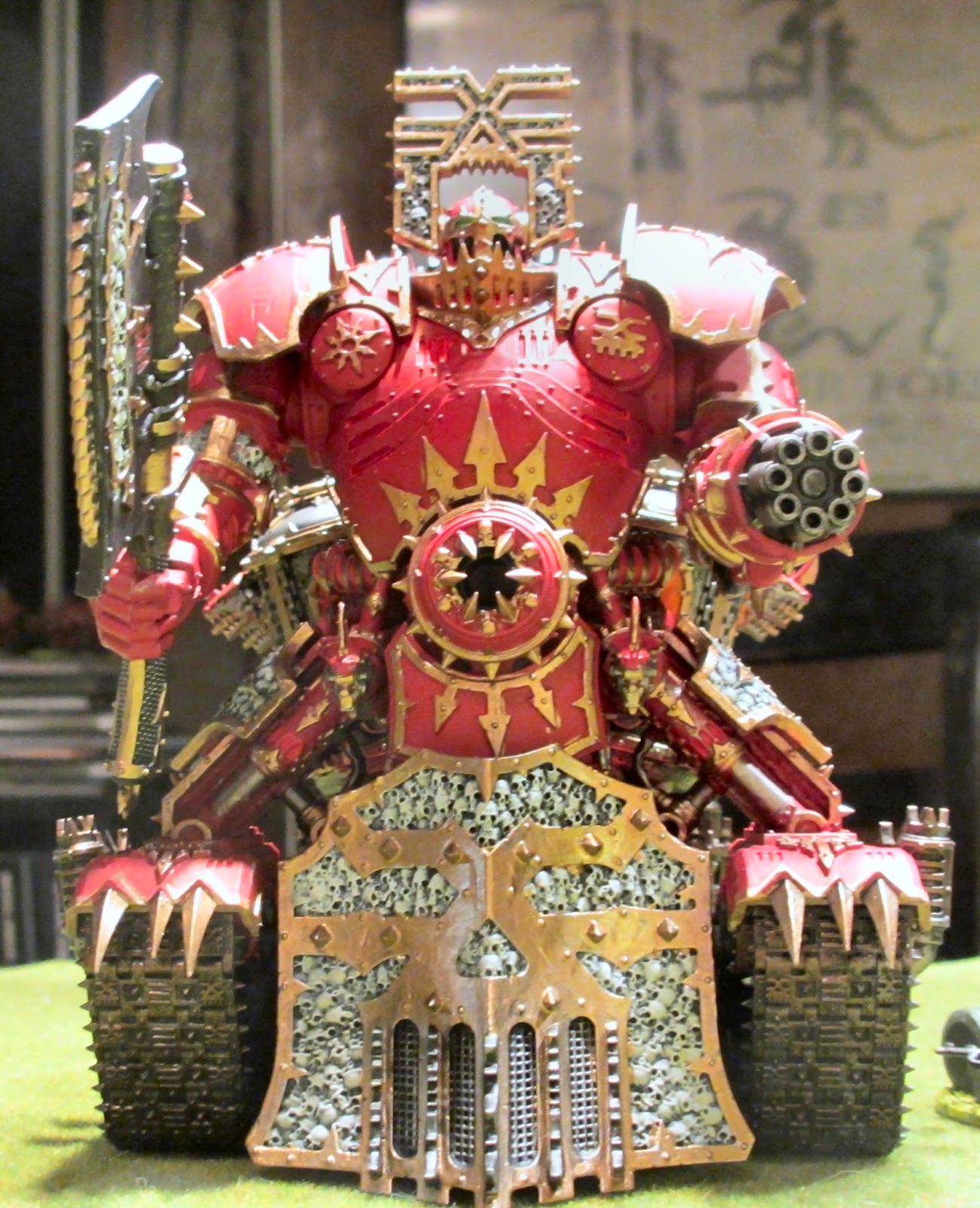 Yes, the model is a bit over the top Chaos silly. But I still love it anyways. It was a semi-complicated build and a long, slow time painting. So much brass trim. This was one of those kits that had to be built and painted in sections, put together and then painted some more. I am pleased with the final result.

It makes a great centerpiece for my World Eaters army. I will have a "family photo" of the army up once I finish painting the Heldrake next week.


Skulls for the Skull Throne
Or for the Dozer blade, it could use a few more...

Posted by Marcus the Blackheart at 11:27 AM No comments: 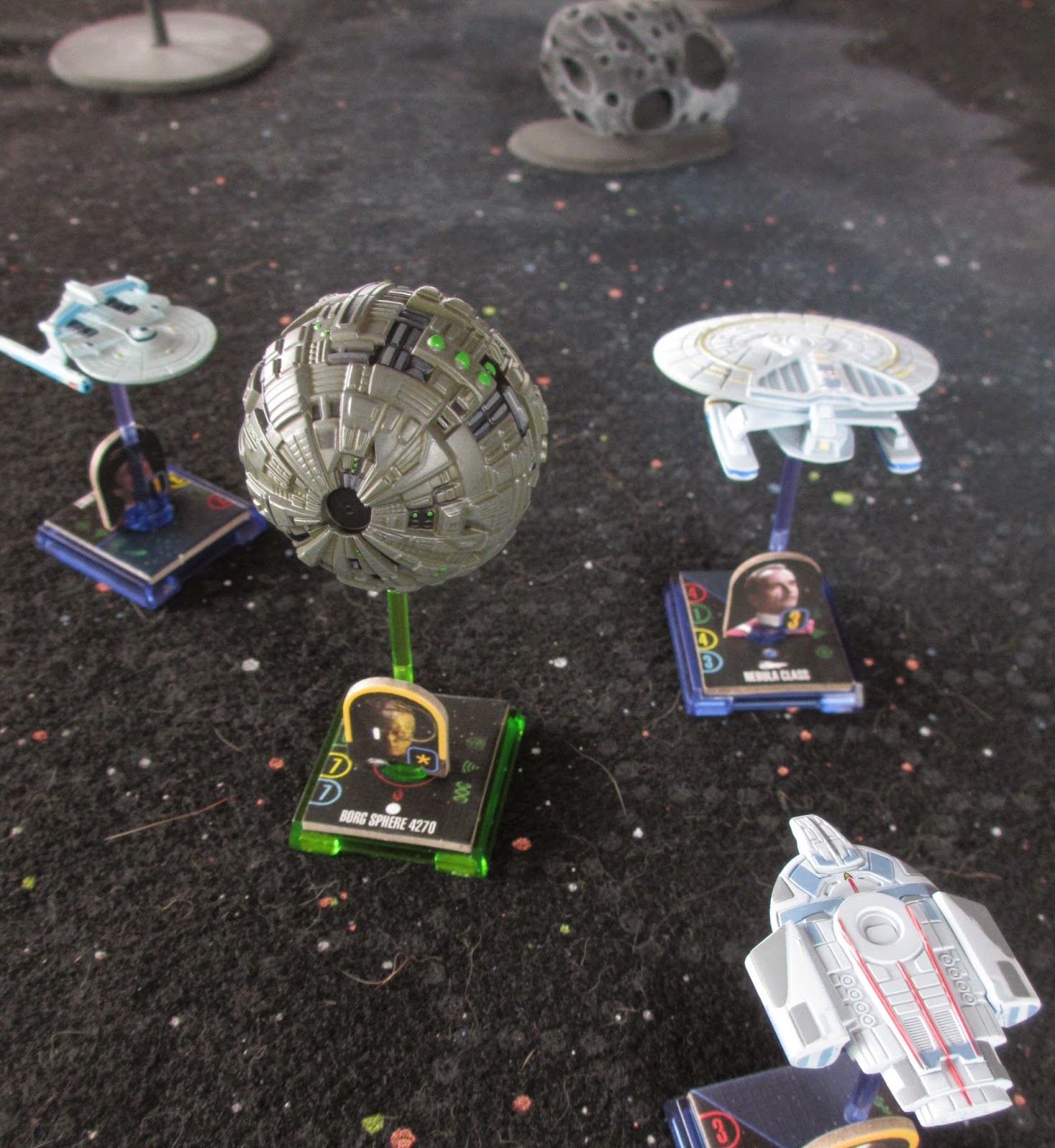 The big cyber-zombie baddies are here for Star Trek Attack Wing. And they don't disappoint. So we gave them a test drive. One Borg Sphere o' Fear fully equipped came to a cool 80 points. I took a firepower heavy Fed fleet. It was almost close.

The Borg do come with a slew of special rules, all fit well into the game without bogging down at all. The Captains have a neat system where they start with a number of drones, 4 for the 3 point Captain and 1 for the 0 point one. Your Captain level is equal to the number of drone tokens on the Captain's cards. The Drones can be spent for attack re-rolls and the Assimilation action card in this set, I'm sure more fun ways to spend drones are coming.

The Borg Sphere moves in a novel way: No turns. You may only change direction by 90 or 180 degrees by the Spin maneuver; you rotate the ship 90 or 180 then make your move with the straight template. Nice and easy, but makes for interesting play.

Sphere 4270 is 40 points of evil. Attack 6, Shields and hull 7. No evade. Target lock, scan and regenerate for actions.

Rule one when fighting the Borg, do not let them get to range one if they have a tractor beam, or FSM help you, a tractor beam and a cutting beam. Yes of course I made that mistake. The Nebula was turned into a cloud of plasma in one turn. Sigh. Let's talk about the highlights of the upgrade cards. 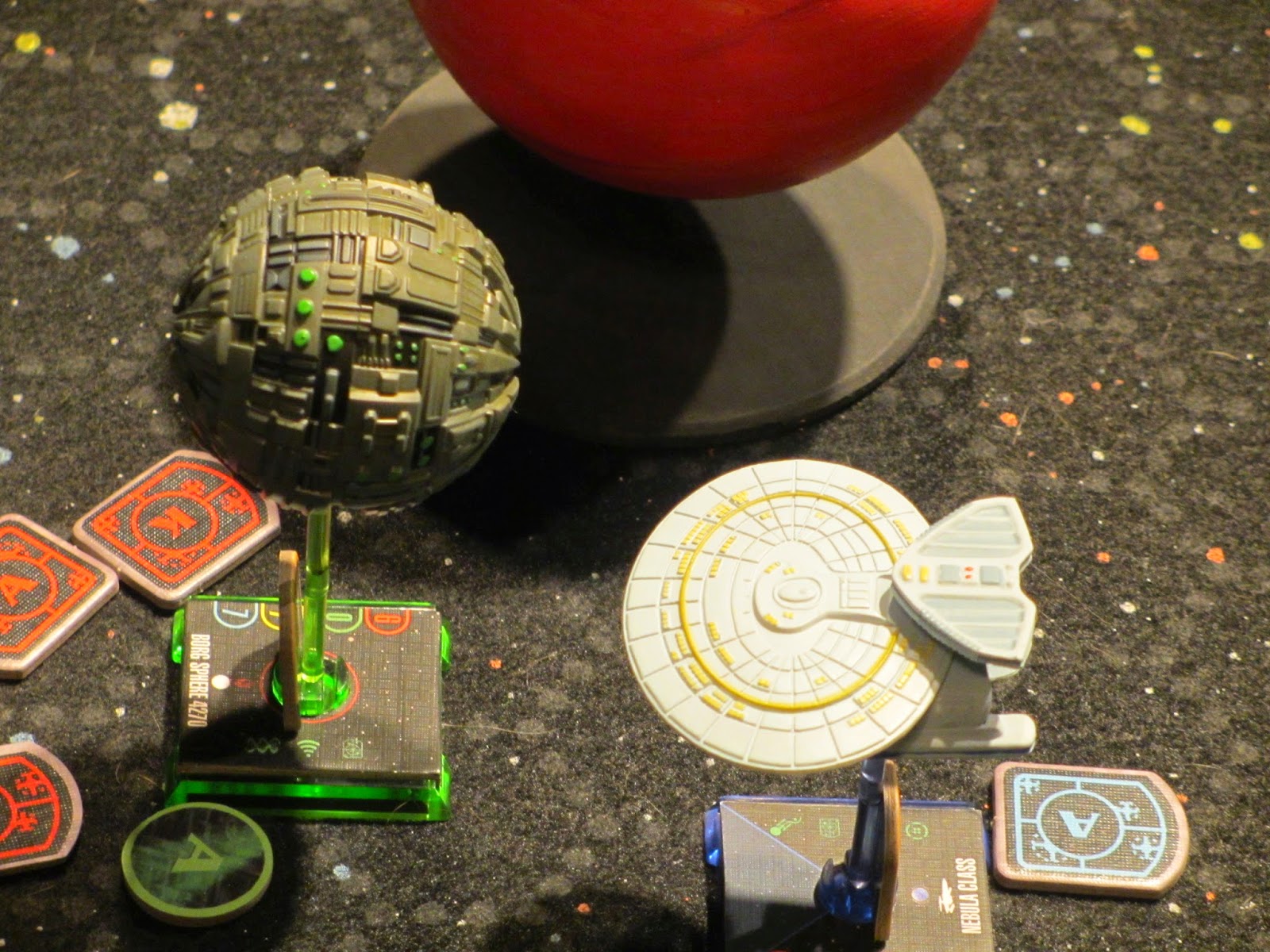 The Borg Tractor Beam is an action at range one, the victim gets two shields disabled and if cloaked, immediately un-cloaks and raises it's shields minus two. Then if the target ship is still alive, next turn it can only pick a 1 or 2 maneuver. 7 Points

The Cutting Beam: Range one attack. 10 dice. The Borg has to have the target in a Borg Tractor Beam, and then the card is disabled. 8 points.

Feedback Pulse: A nasty dirty trick for 8 points. You declare you are using it before any dice are rolled, then half the hits are put on the firing ship, you take no hits and get an Aux Power marker.

Assimilation Tubules: 8 point action. Range 1-2 and costs one Drone. You get to steal a crew, equipment, or weapon upgrade. Fun times.

Seven of Nine: 4 point Crew, disable to gain 2 drones, up to your max.

The Borg are good addition for Attack Wing, I look forward to the Tactical Cube in June, that should be a hell of a thing. 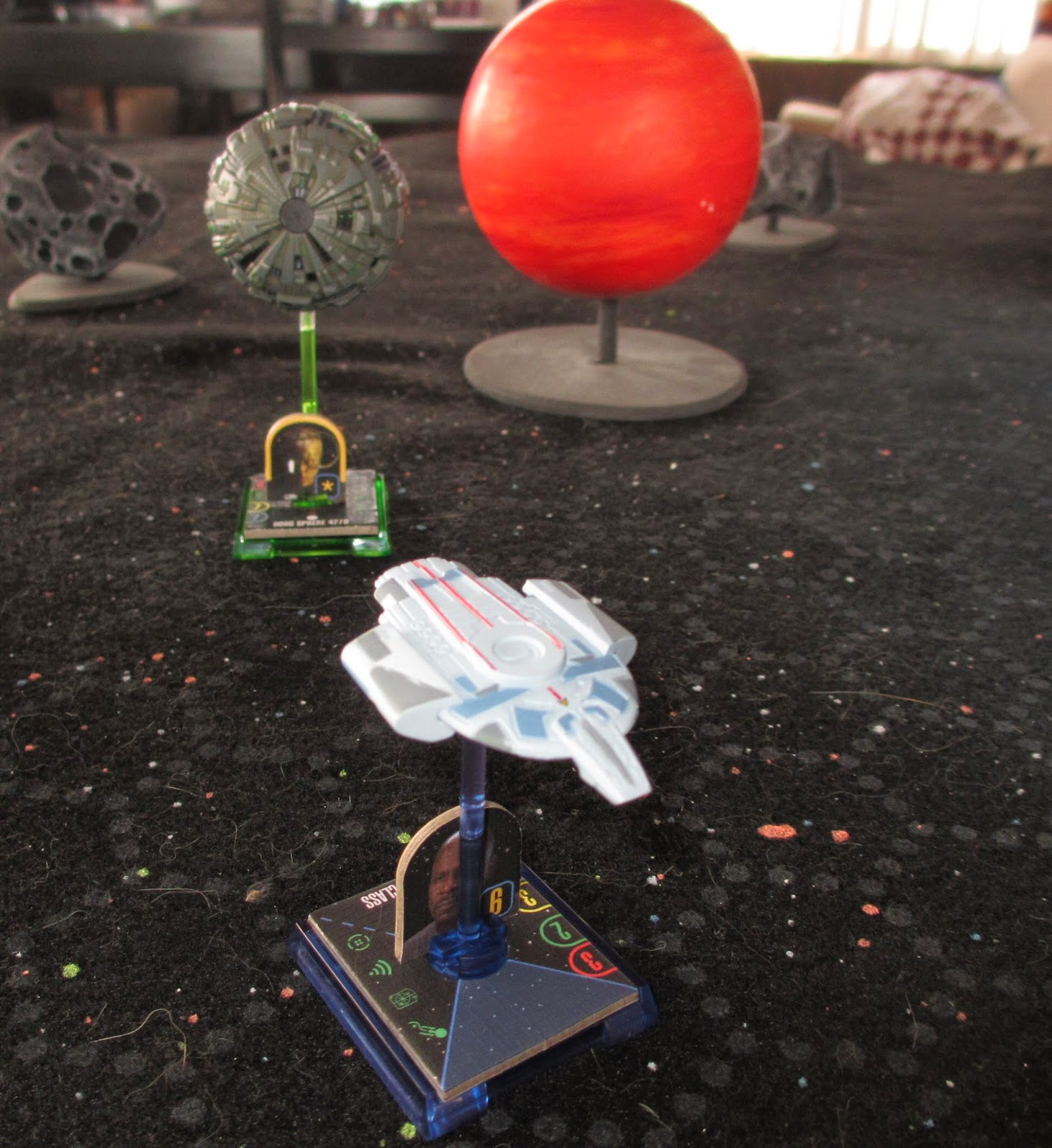 Posted by Marcus the Blackheart at 1:48 PM 2 comments: 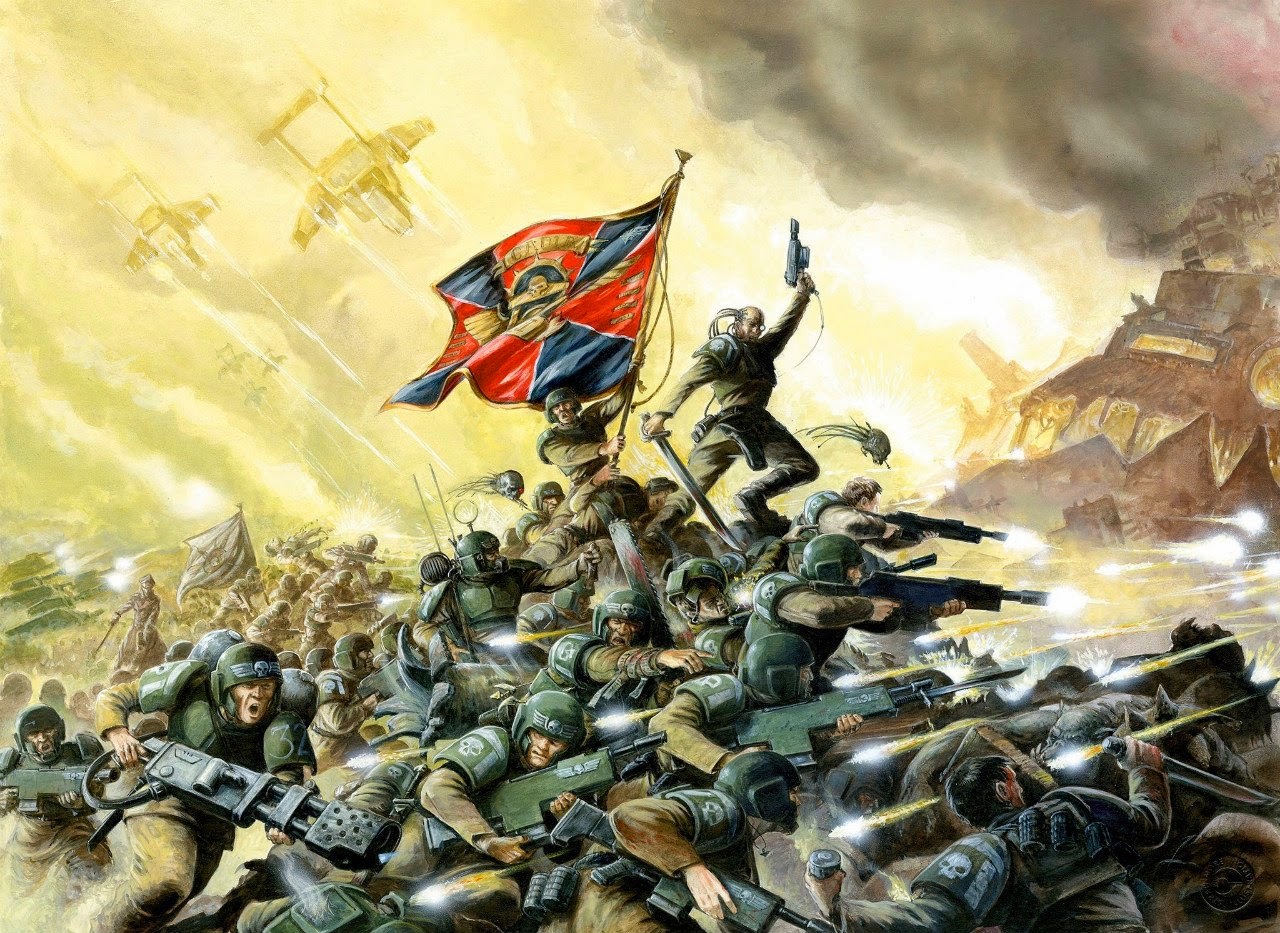 Three name changes and six or seven books later we have the new Army/Guard/Militarum codex. Of course there never was a Imperial Army Codex, but they had army lists in the Rogue Trader Expansion books, right next to the Space Ork Raiders and Space Elves. 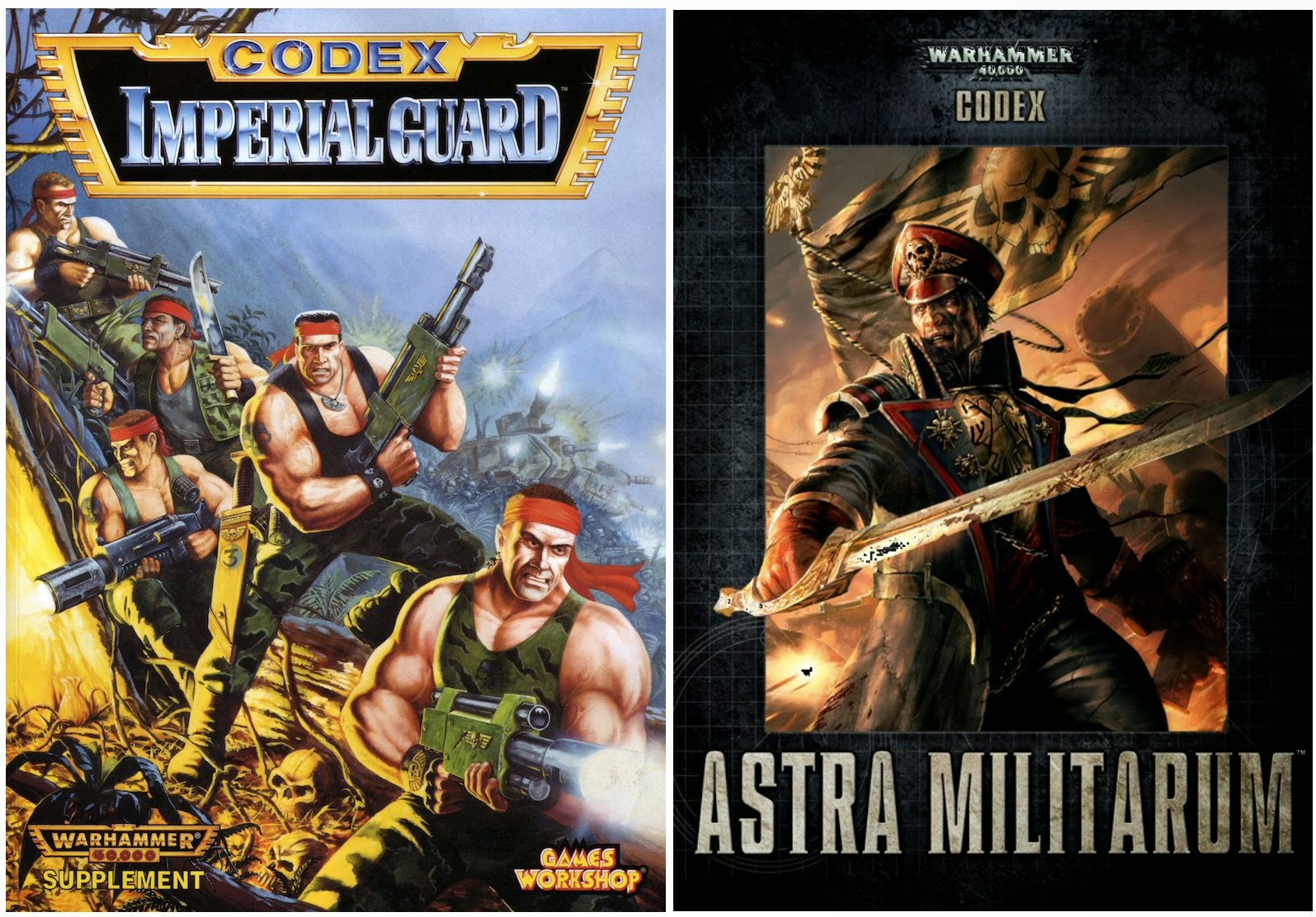 The new book is a little light on fluff but has lots of pretty pictures. So what does this new fangled hardcover do for us Guard players? Plenty of good and a bit of bad. I have yet to get a game in with the new book (I hope for this weekend) but as a Panzer enthusiast, the new Tank commander HQ makes me happy.

Let's get the bad out of the way. Maybe not so much bad, as missing: 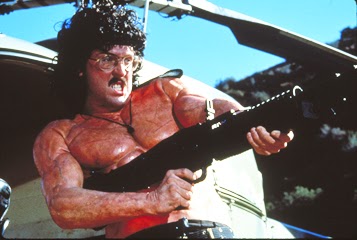 Yeah, Marbo is hidden so well he is not in the codex. Al'rahem, Chenko, Kamir, and Bastone are all also M.I.A. The Medusa, Colossus, and Griffon are absent as well. The rumors are already starting that a few of the characters are coming back, notably Marbo. Strange that we only lost characters and didn't gain any new ones.

The nice new Hydra kit has lame rules. Giving it interceptor would have made it too powerful for the points, but not being able turn off Skyfire to shoot at ground targets is dumb. As is the loss of it's auto-targeting systems to deny bikes and skimmers their jink save.

I am in favor of the cost increase and carrying decrease of the Vendetta, it was far too cheap and good. The changes to the Stormtroopers (aside from the name change) and the new models make me very happy.

I'm sure something else will jump out and surprise me after a few games, but overall I'm happy with the minor rule tweaks. I really like the new and useful orders and the flexibility of where you can attach your Commissars. 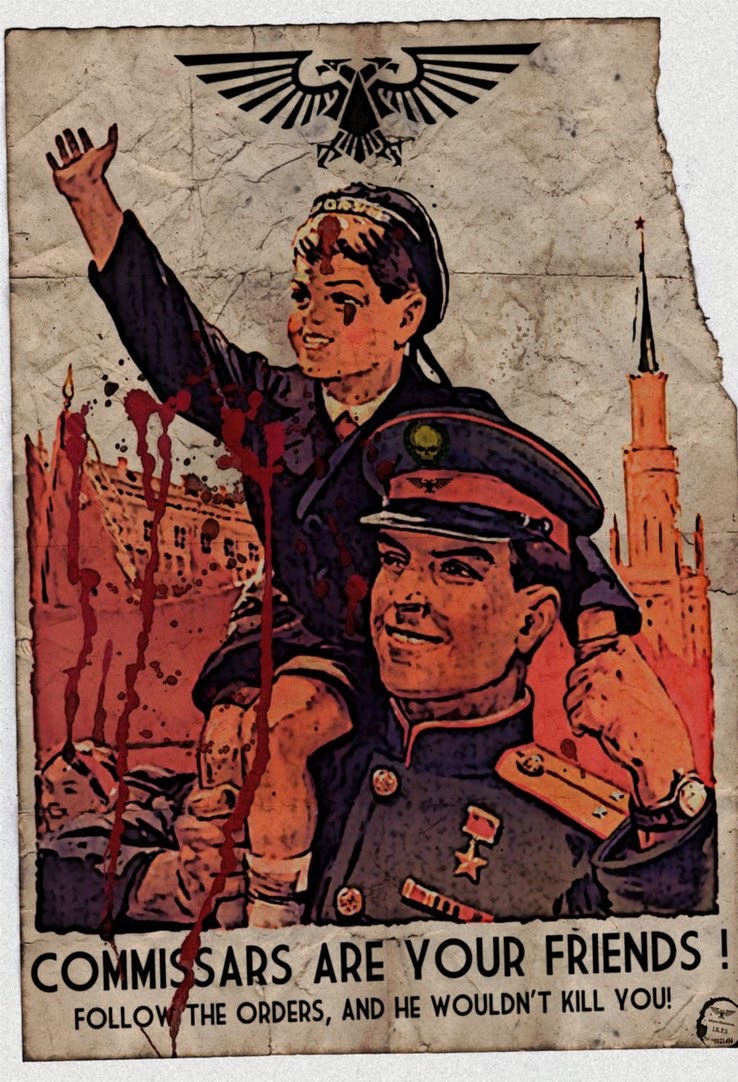 The Emperor Protects
But Marbo is Behind You!

Posted by Marcus the Blackheart at 12:55 PM 4 comments: 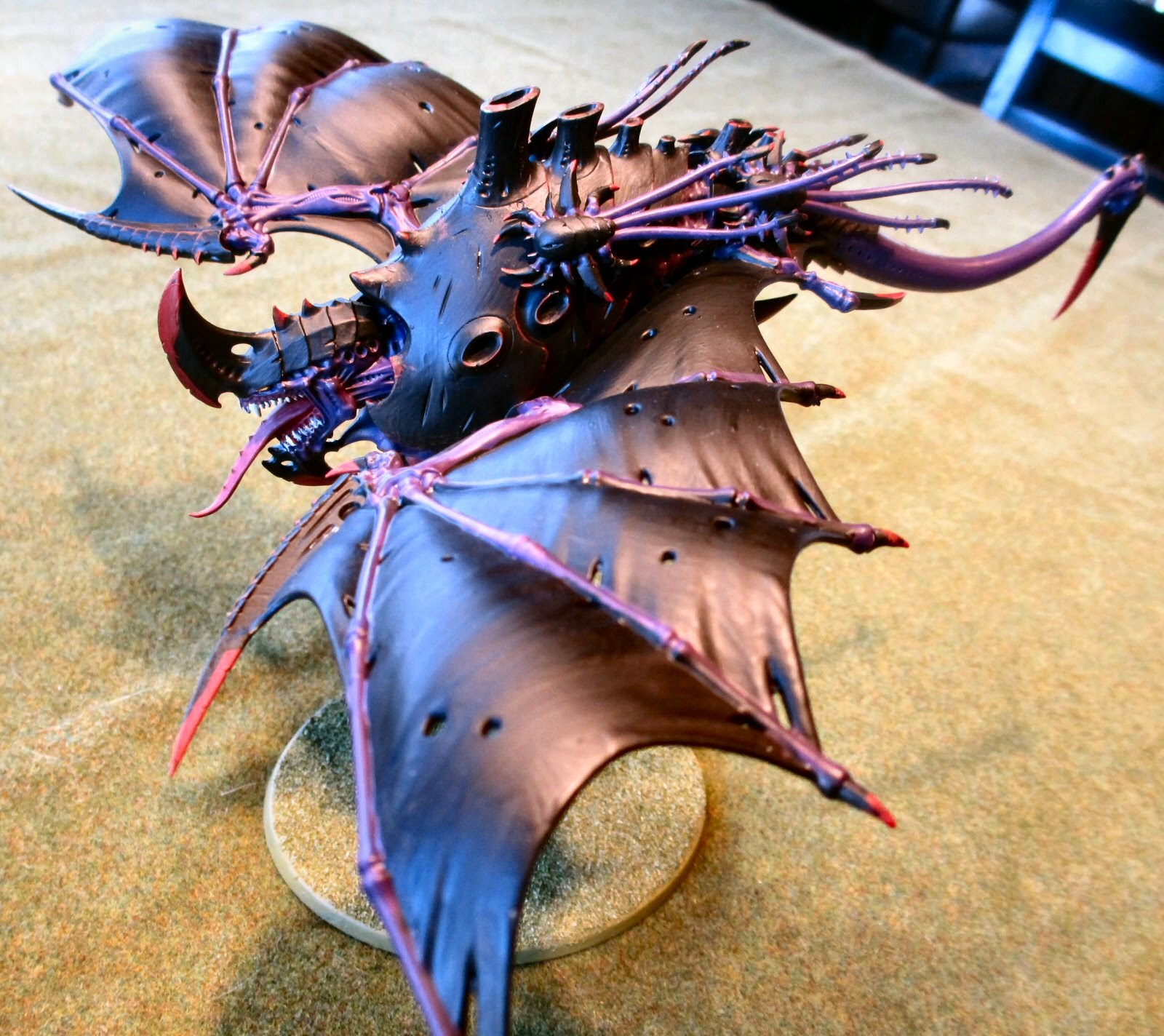 Almost done with my Tyranid re-redo. I wanted to spice up my Hive Crone a little bit, so I took a spare Tyrannofex head and voila! It fit like it was made for it. I think it gives the Hive Crone an aggressive "I like to ram things" look.

The Tentaclid living missiles are very cool, but the look is wasted if mounted under the wings. After some consideration, I went with the Remora and Shark arrangement: It seemed more organic to me, rather than the Tyranids copying the wing mounted missiles thing a bit too closely. 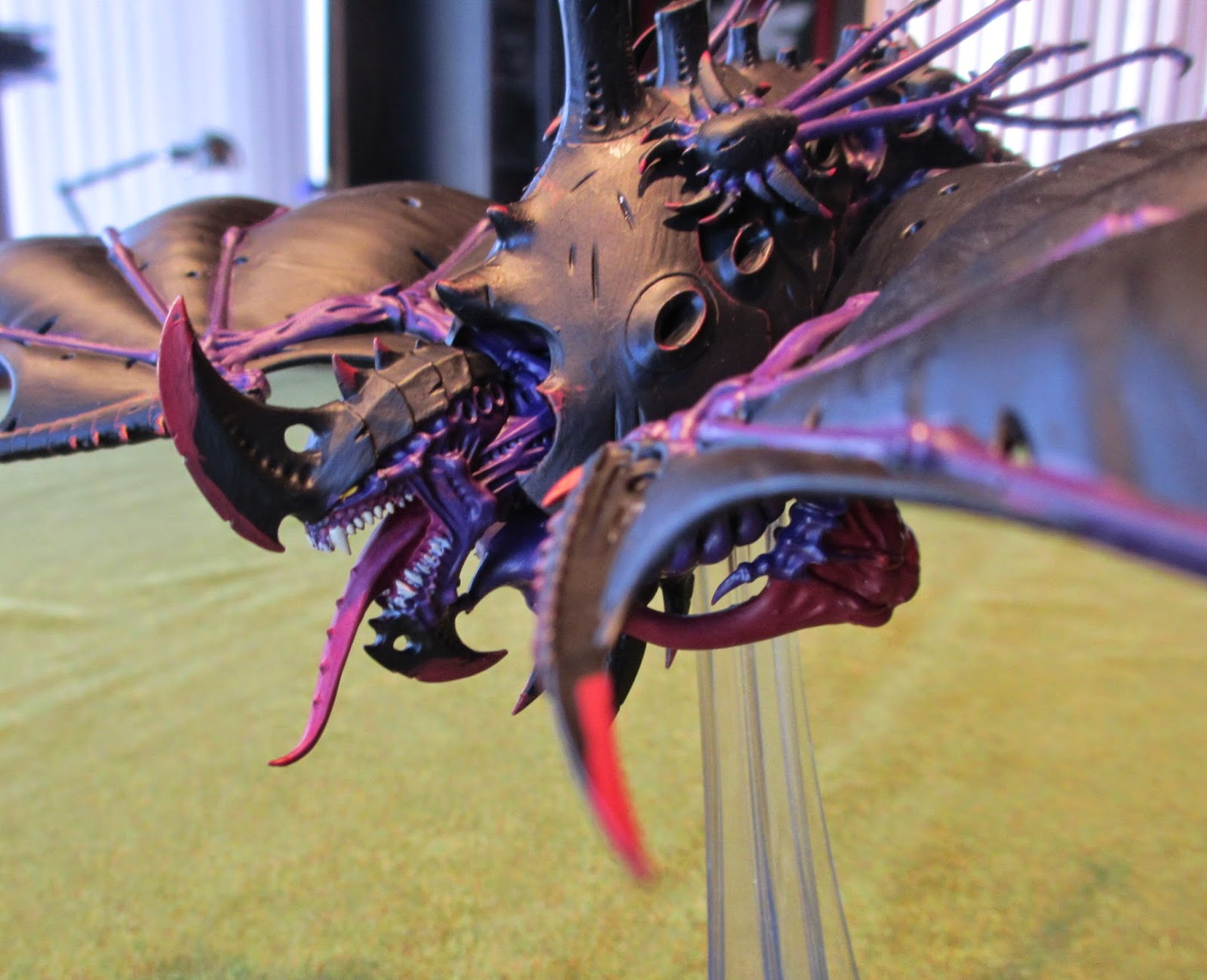 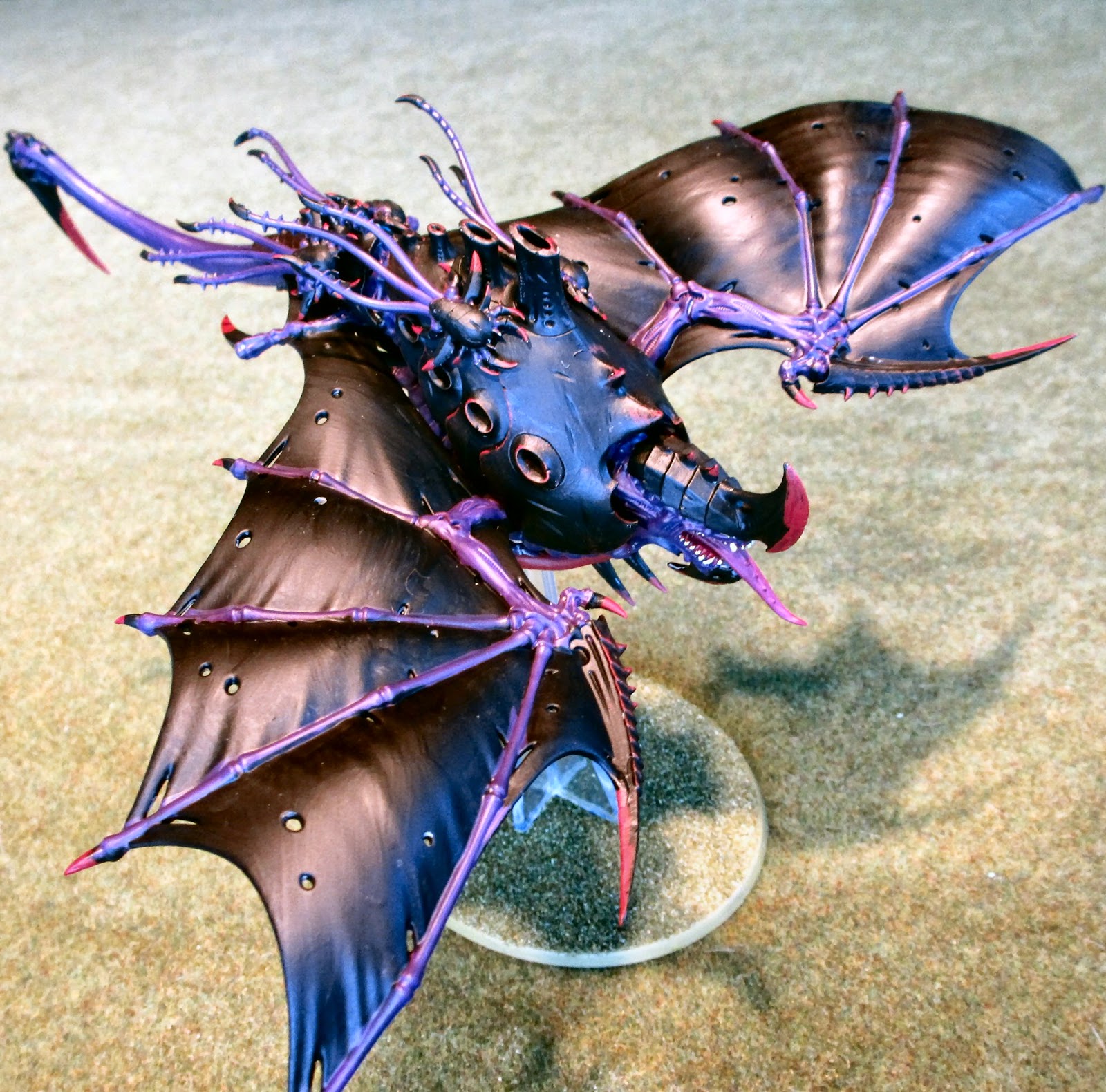 The Hive Crone and Harpy are great additions to the Tyranid force, good looking models that work well on the tabletop. Stay tuned for a Tyranid Air Command battle report. Up next, my take on the new Guard Codex, or whatever the hell they are called now.

The Hive Mind Hungers
Now I want a Harridan

Posted by Marcus the Blackheart at 2:28 PM 4 comments: