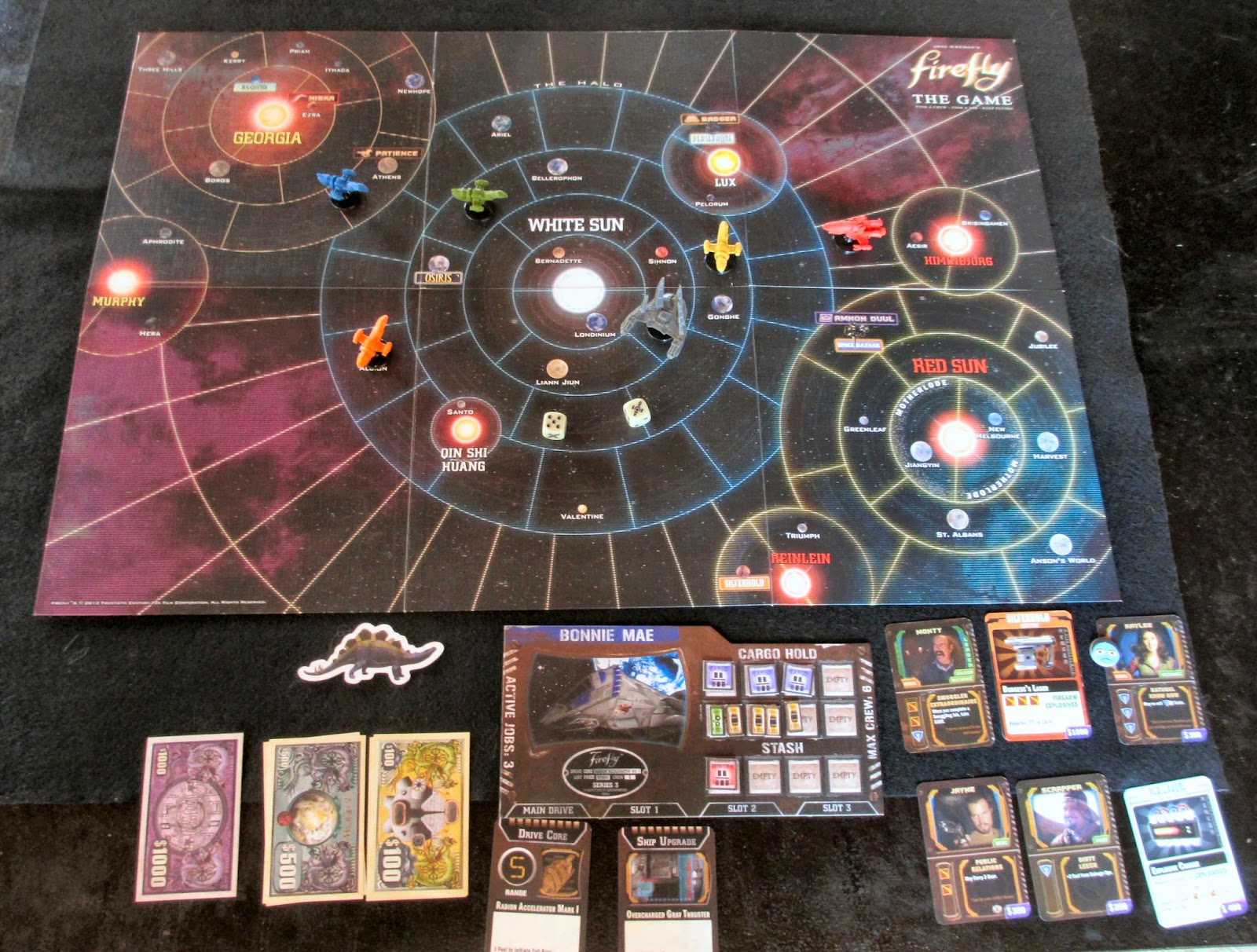 We picked up Firefly: The Game a couple of weeks ago. Yes, I know, welcome to eight months ago. I enjoyed the show and felt it was canceled prematurely, but I am not a Browncoat. So I waited on the game until I got some positive feedback on how it was as a game, not just fan service.

Luckily, it does both! The game's art is well done and just oozes Firefly atmosphere. It may try a bit too hard in some aspects, but it is not overbearing for players not real familiar with the show. The big question is how does it play?

Firefly: The Game is a 1-4 player game were the player is a captain of a Firefly-class ship trying to make their way across the 'verse. This is accomplished by hiring crew, buying gear and getting jobs. You can stay on the right side of the law, but the jobs don't pay nearly as well. Things can get very dangerous outside of Alliance space, but that is where the real money is made. A player wins by completing the goals on the Story card. Goals vary by the different Story cards, so replay value is very good. That and the random nature of  drawing from many different decks for contacts, jobs, gear, and travelling. 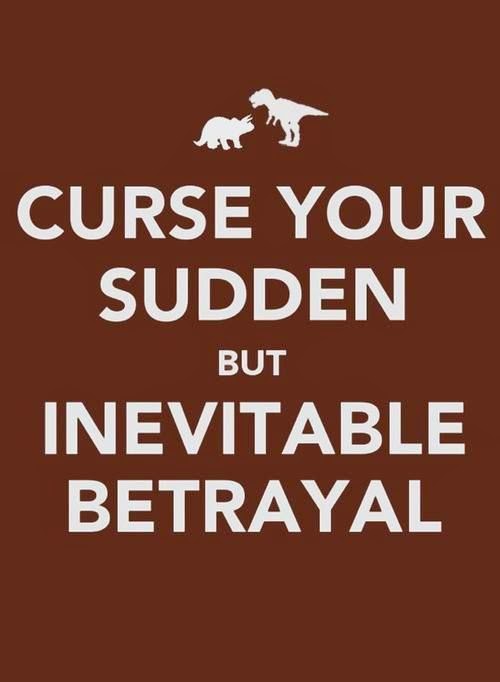 Player interaction for the base game is low, (the second expansion adds some) but that is not really a minus in this type of game. The game flows quickly, and has a short learning curve. Gale Force Nine has done a good job with this license. Even though it is aimed squarely at fans of the show, it is a good game that benefits from it's setting rather than being handicapped by it like so many games based on a TV show or movie are.

I have picked up the first mini-expansion, a deck of extra cards that add nicely to the game without adding any new rules. The second expansion adds two new ships, bounty hunting, and new story cards. A third expansion has been announced, so it looks like there will be support for his game for while. I just hope they don't go totally overboard with the expansions and make the game an unwieldy mess.

We recommend Firefly: The Game if you liked the show and enjoy a good sci-fi trader/smuggler game.


Go Roll Some Dice
He's not the first psycho to hire us, nor the last.
You think that's a commentary on us? 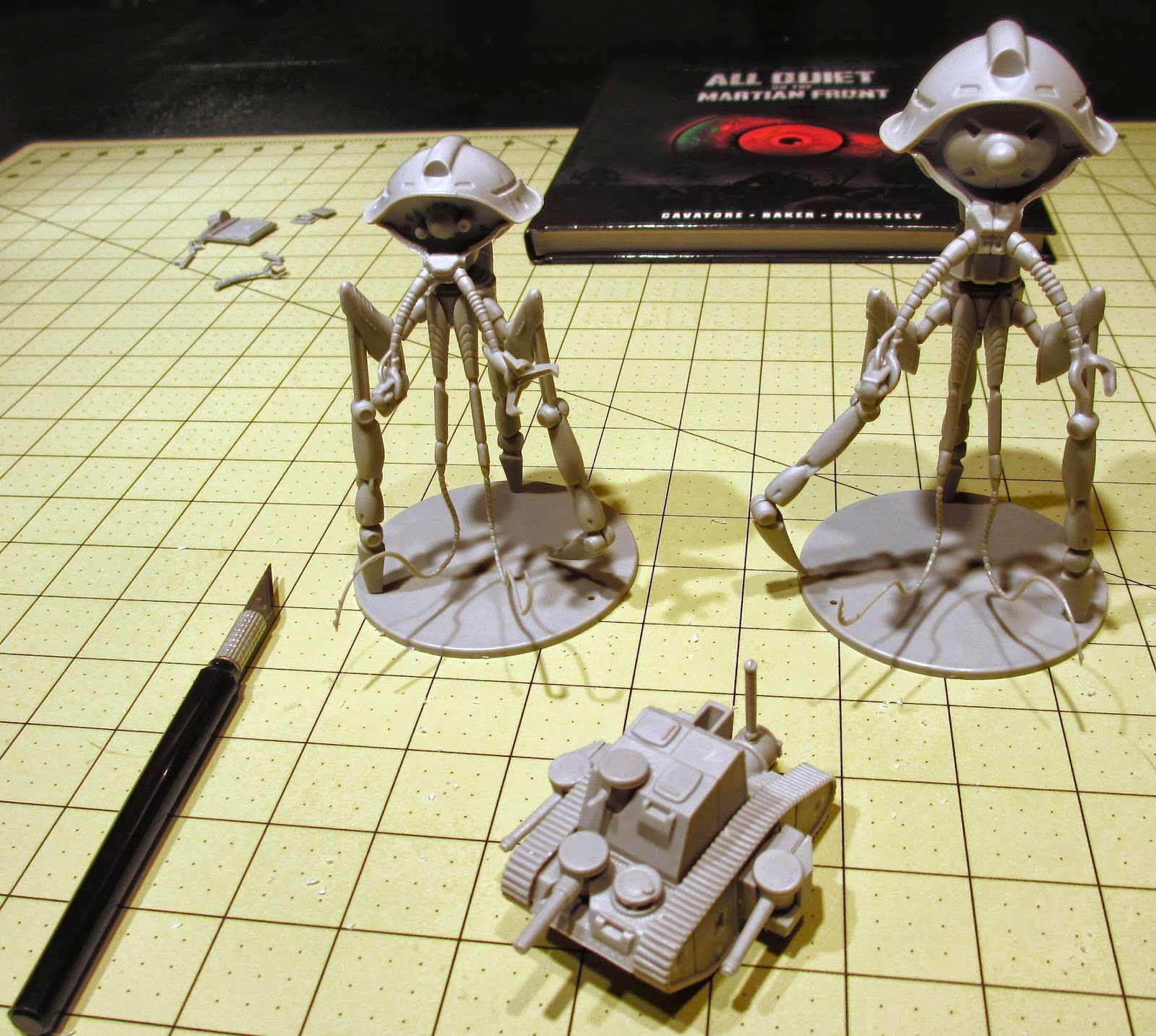 All Quiet on the Martian Front was just released by the nice folk over at Alien Dungeon. It is a 15mm scale tactical game of the Martian invasion early 20th century. The "current" game year is 1914 and the Martians control a large part of the globe. I backed it on Kickstarter just over a year ago and finally the big box arrived containing about 2/3 of the initial releases.

The main rule book is a nice 176 page full color hardcover. Good art and lots of pictures. The only minor complaints I have is that the pictures of the models are all of the prototypes and not of the much nicer plastic production run. The other complaint is lack of all the tables gathered together at the back of the book. That is less of a worry as I'm sure they will be released as PDFs.

One of the big goals of the Kickstarter campaign was to raise enough capital to make the Tripods and tanks out plastic. That was passed, and thank goodness it was. The plastic Assault and Scout Tripods are very easy to work with and go together in a flash, I've put together six of each in no time at all. The US tanks are also plastic and easy to assemble, with parts to make several different versions.

I built a few Tripods, and then settled in to assembling the US Army forces. 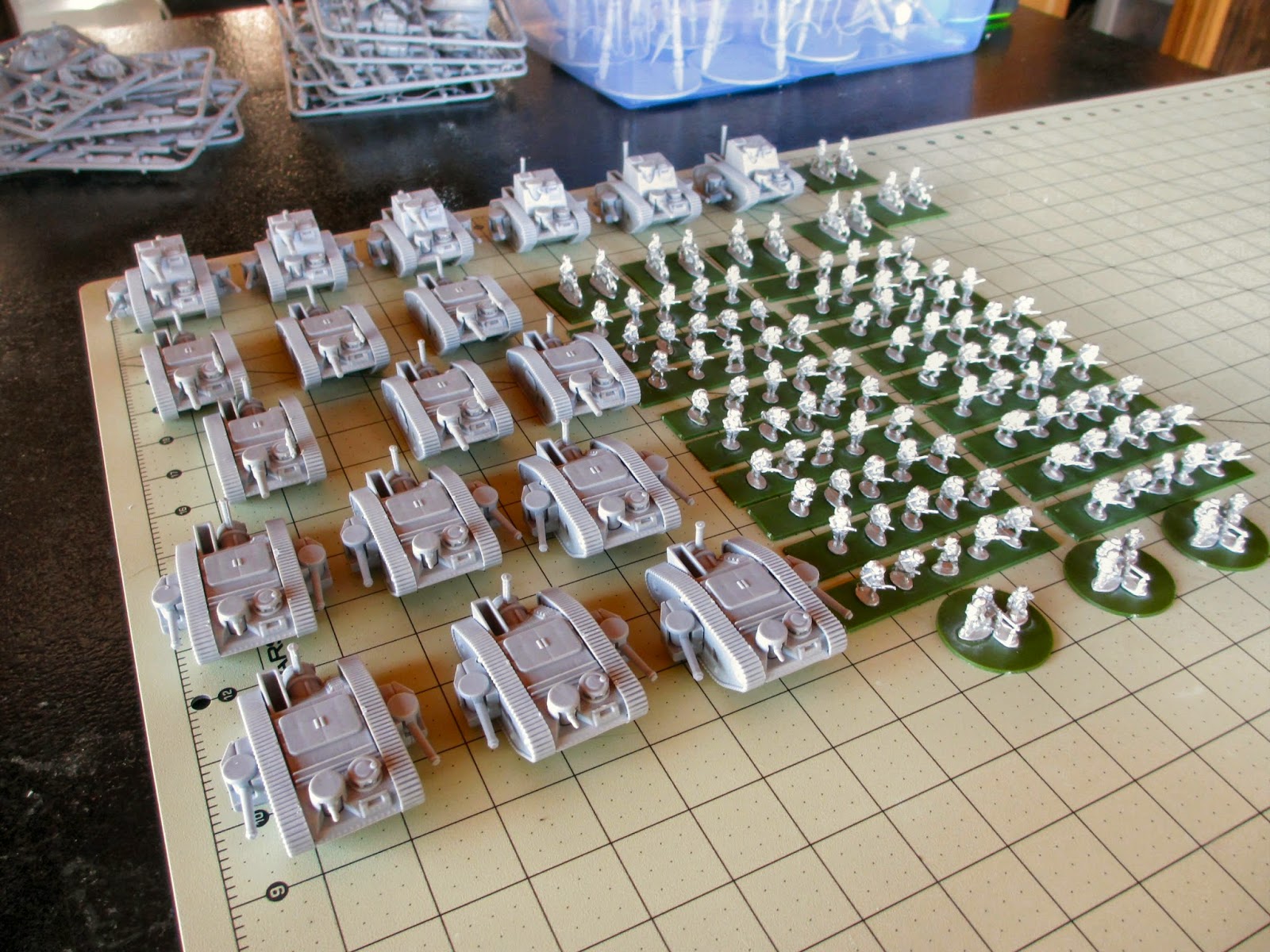 The infantry are single piece figures that go five to a base. It did take a small amount of effort to clean the flash off them but they went on the bases just fine as did the Heavy Machine Gun teams.

There is a fun unit called "Rough Riders" that are assault troops riding Harleys. No other model gave such frustration in assembly. They are only two parts, the Bike/rider and the handlebars. The handlebar part is very small and difficult to get into position. I managed making two units (six stands) of them without hurling them across the room, and they do look cool. 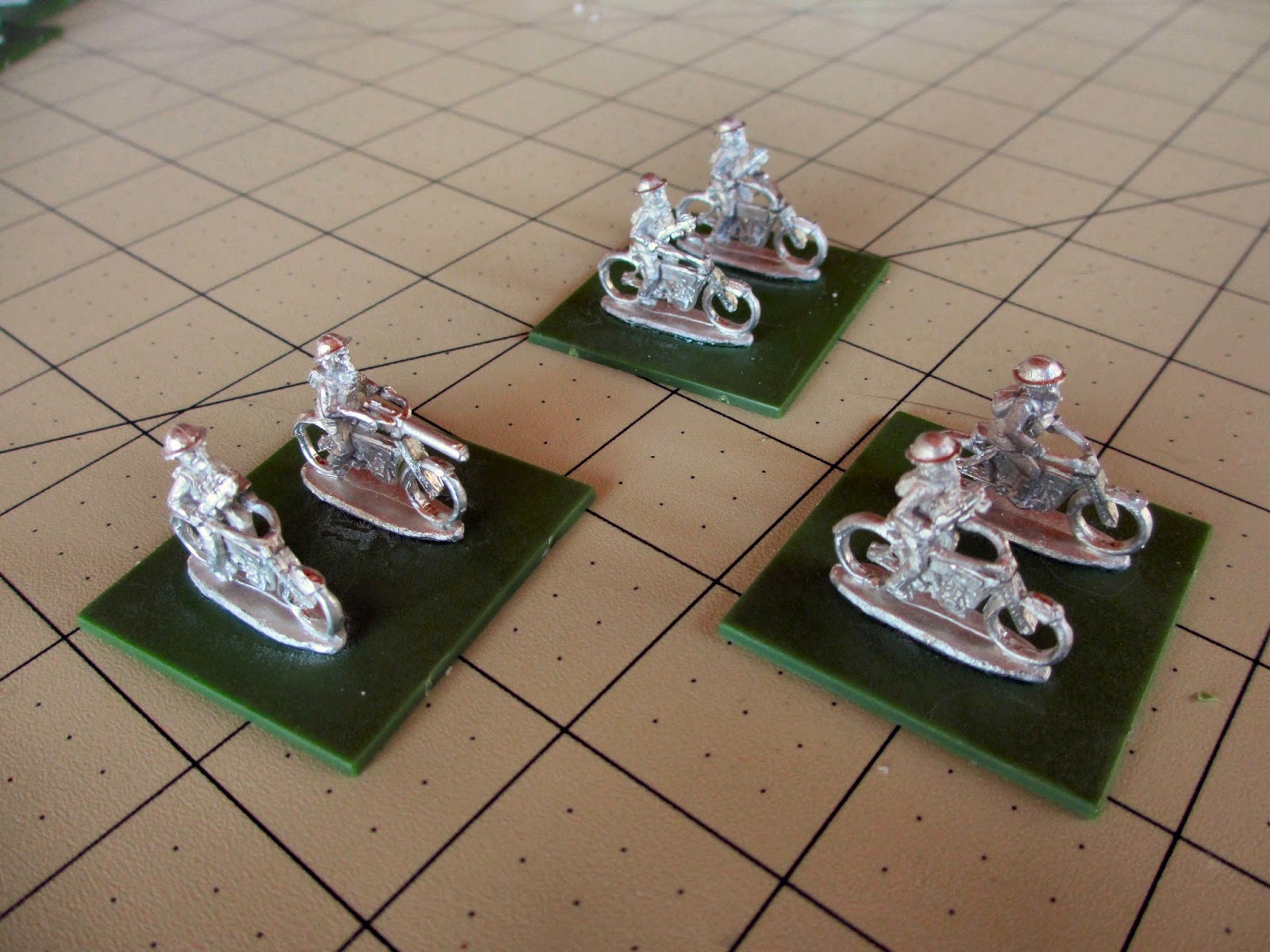 The tanks were fun to assemble, the only sticking point was what variants to make. I did a unit or two of the major ones and a have a few left unbuilt. A PDF is coming soon to fully address the different variants that are now possible with the plastic kit. 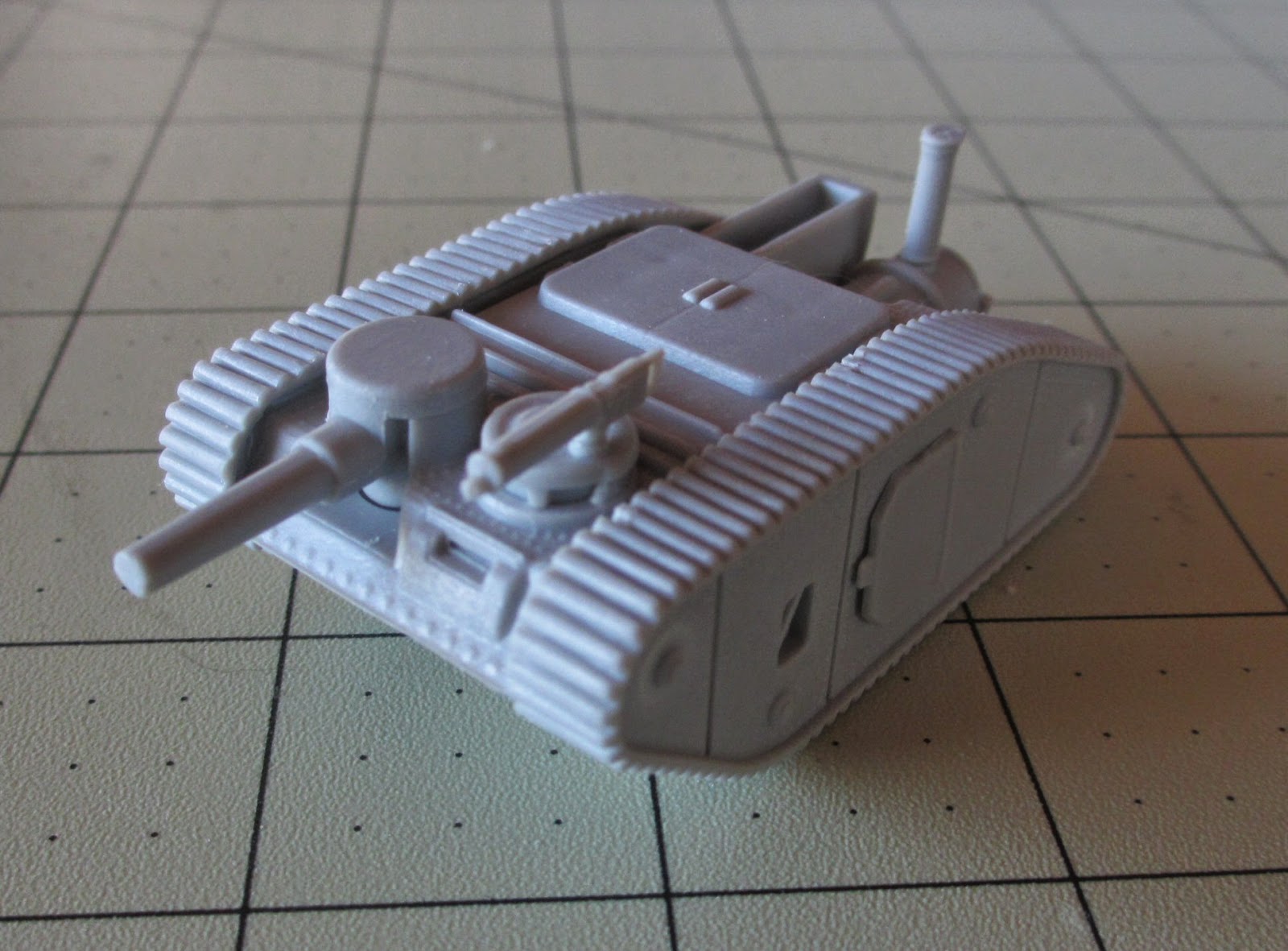 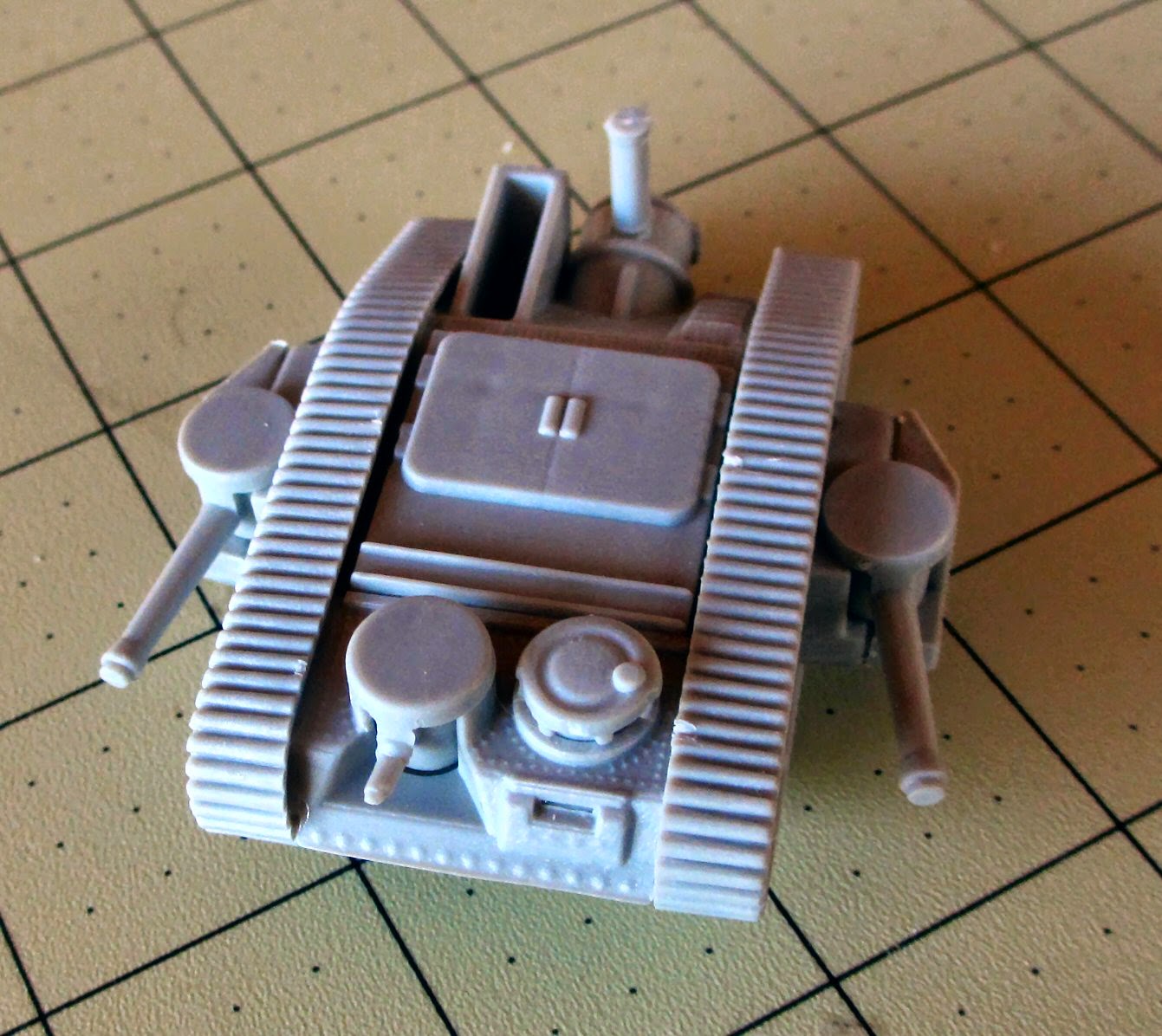 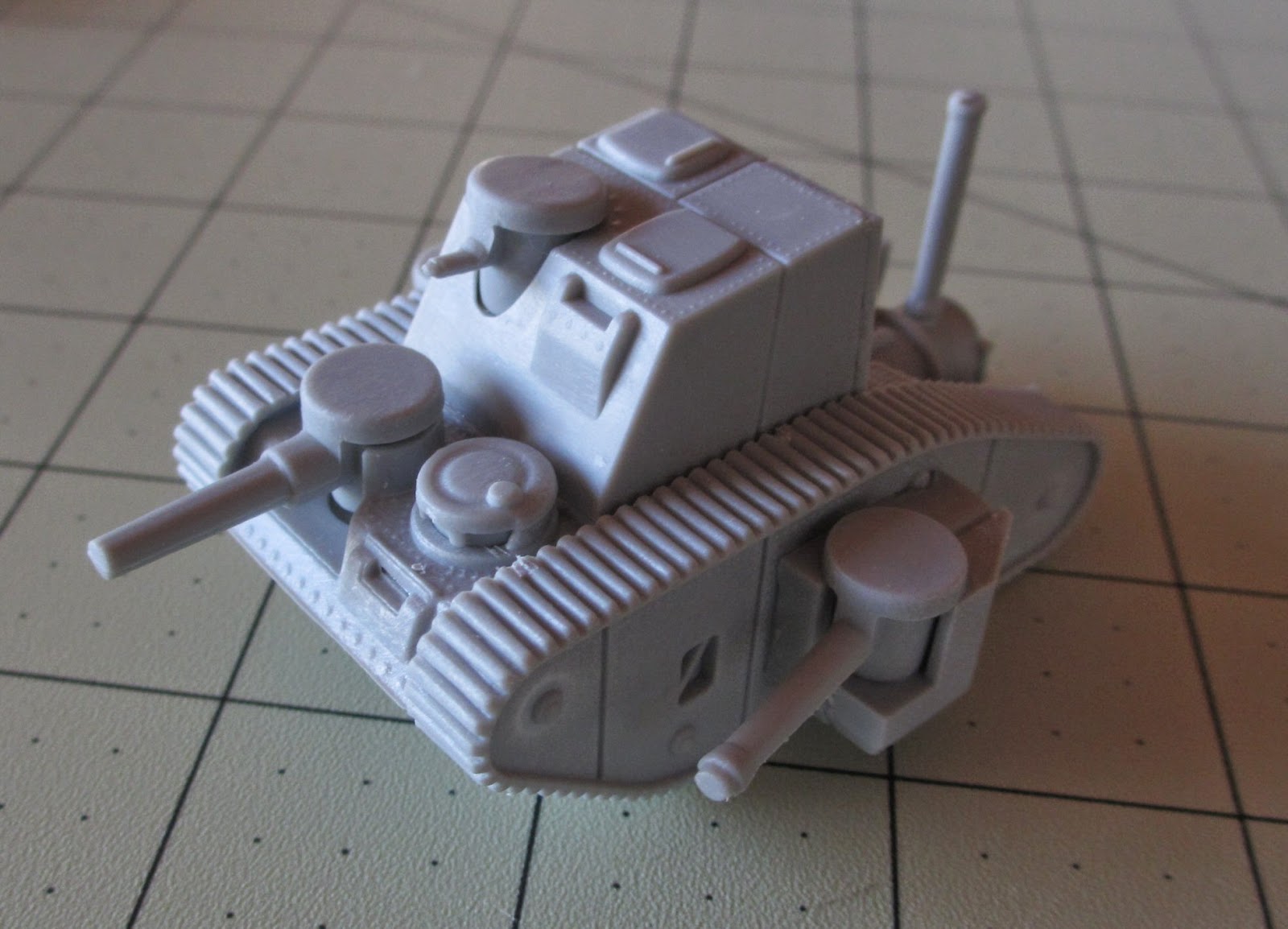 The artillery units, and the large super tanks will be arriving in the next shipment, hopefully before the end of the year.

Next up, the Martians!

Posted by Marcus the Blackheart at 2:13 PM 3 comments:

Labels: All Quiet on the Martian Front 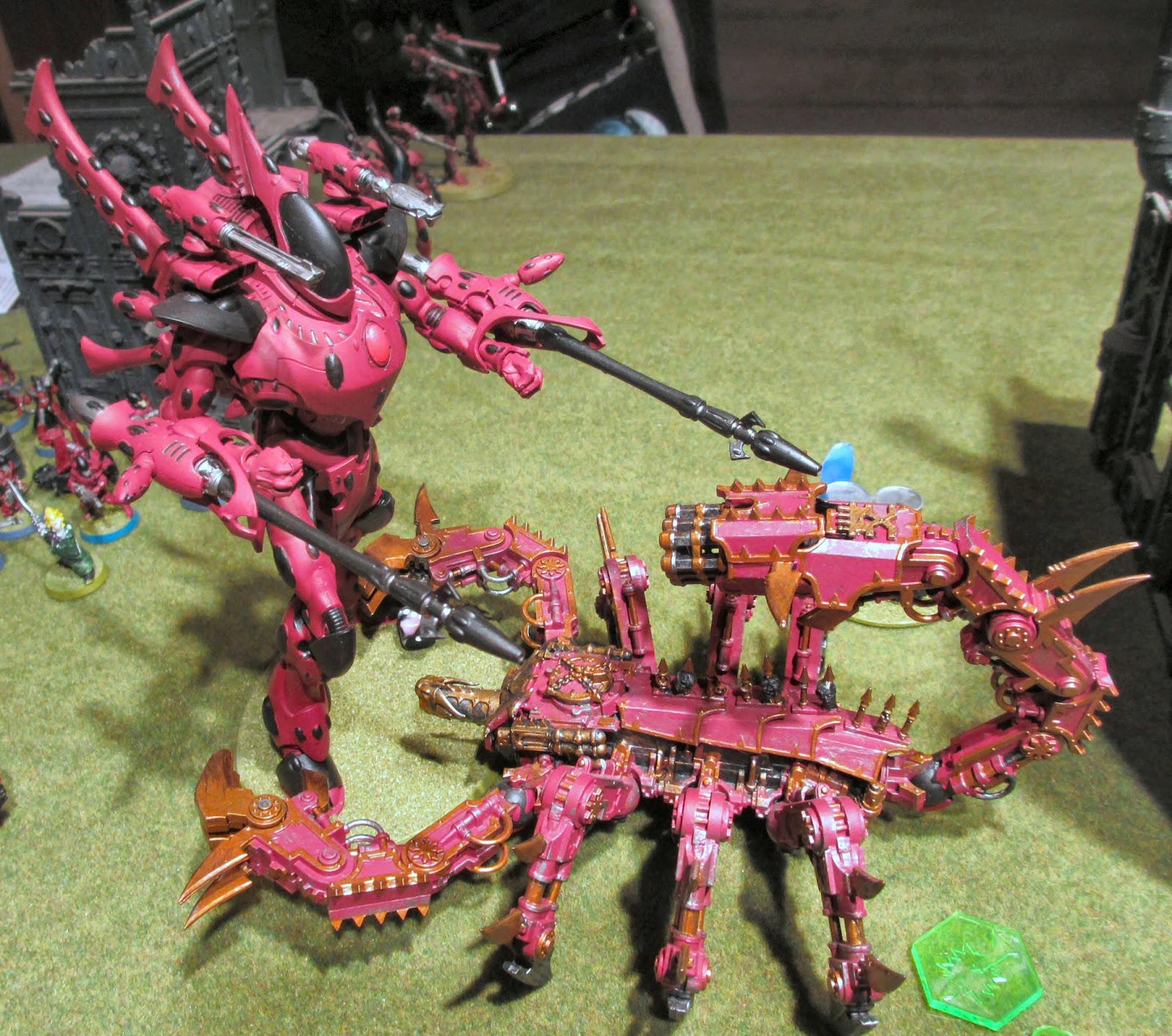 Blood Angels and Eldar vs. World Eaters, an all red army fight! I brought 3000 points of my favorite decapitation enthusiasts up against 1500 points of Mrs. Blackheart's Eldar and 1500 points of Matt's Blood Angels. My list was battle Forged and included the Lord of Skulls, The non-chaos side of the table both tried Unbound lists for the first time.

I wanted to give daemon summoning a try, but as we all well know Khorne has a thing against psykers.  I took a level 3 psyker with only Daemonology-Malefic powers. My fluffy tap dance was that the World Eaters had captured a Psyker and had brought him around to their way of looking at things. Now they use him just as a way to bring forth their friends from the Warp. And that he did. Big time.

Lots of heavies in this battle with a very low infantry count on both sides. Of course I had almost 1/3 of my points tied up in a single model. 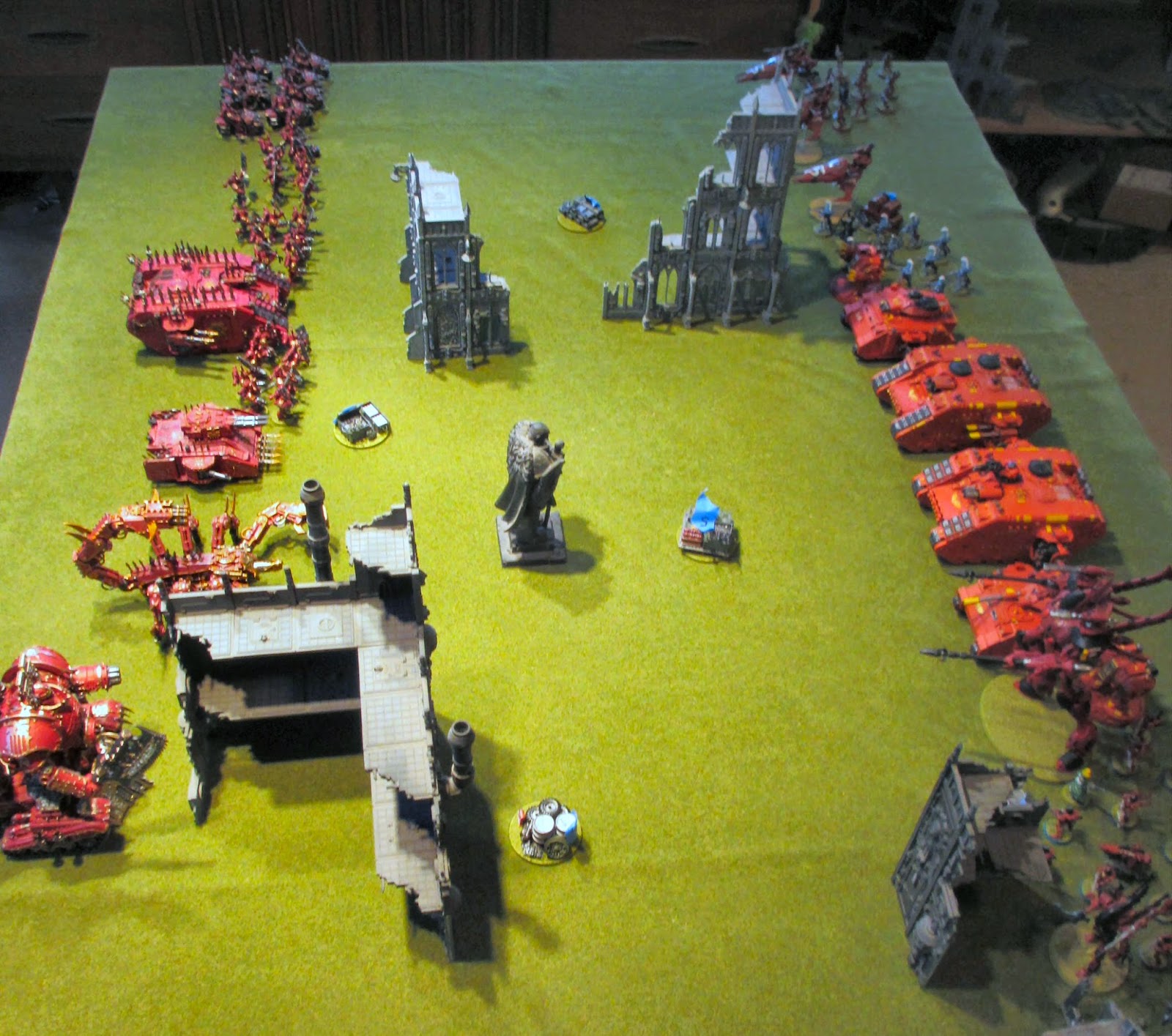 I did a fair job of killing things for the first two turns, but theTactic cards did not favor me, but the Psychic phase sure did. I summoned Bloodletters on turn one and pack of Bloodcrushers on turn two. Fun times with the Warp. Sadly I missed the bright red Furioso hiding in the ruins who popped out and slaughtered the entire pack of ten Bloodletters with the magic of Blood Talons. That's okay, plenty more where they came from! 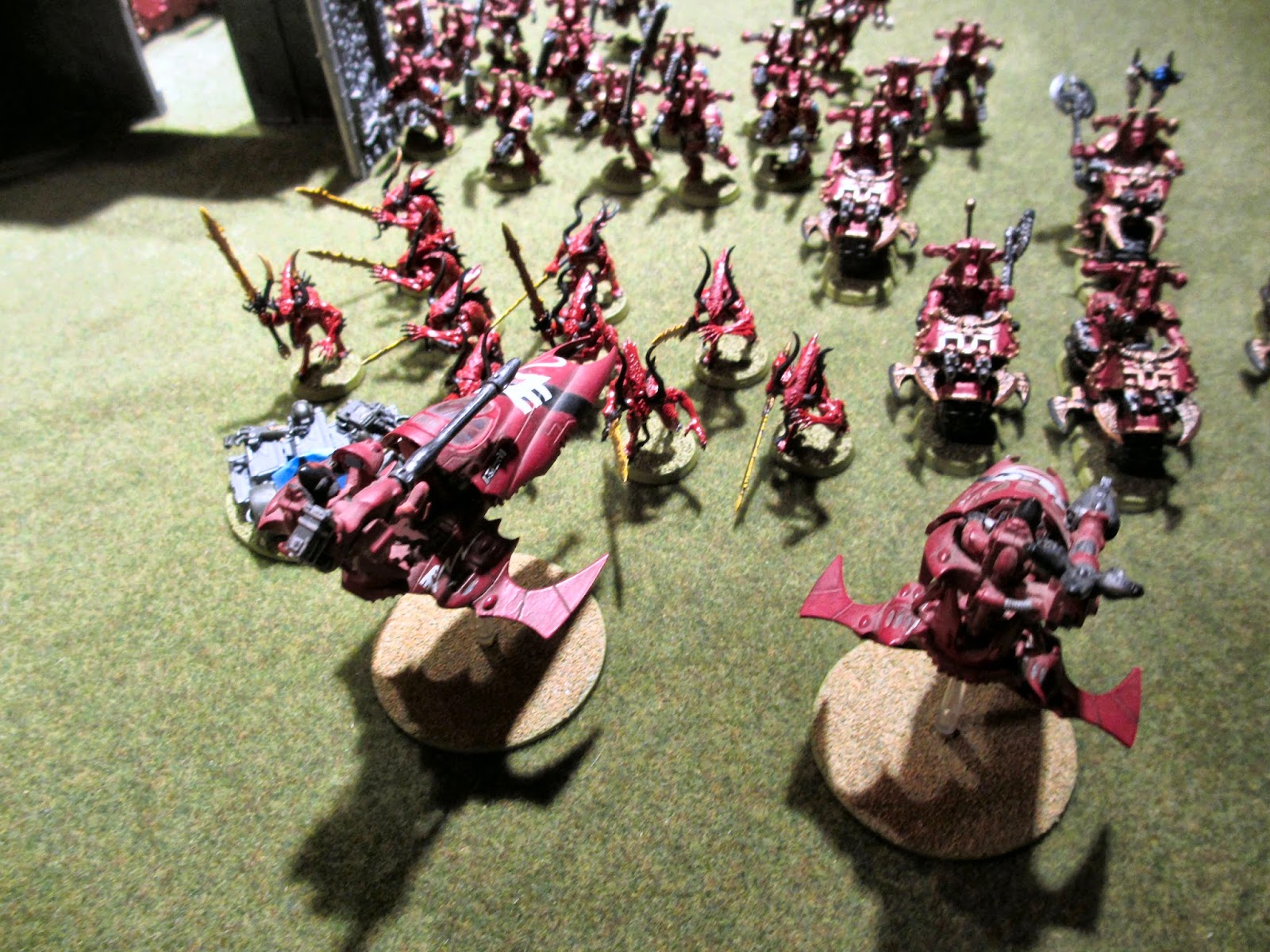 My newly painted Heldrake arrived in spectacular fashion. Killed a Vyper with a vector strike attack and then flamed five Dire Avengers and the Farseer. The Blood crushers charged and wiped out a unit of Guardians. Things were looking great for the slightly-darker red guys. 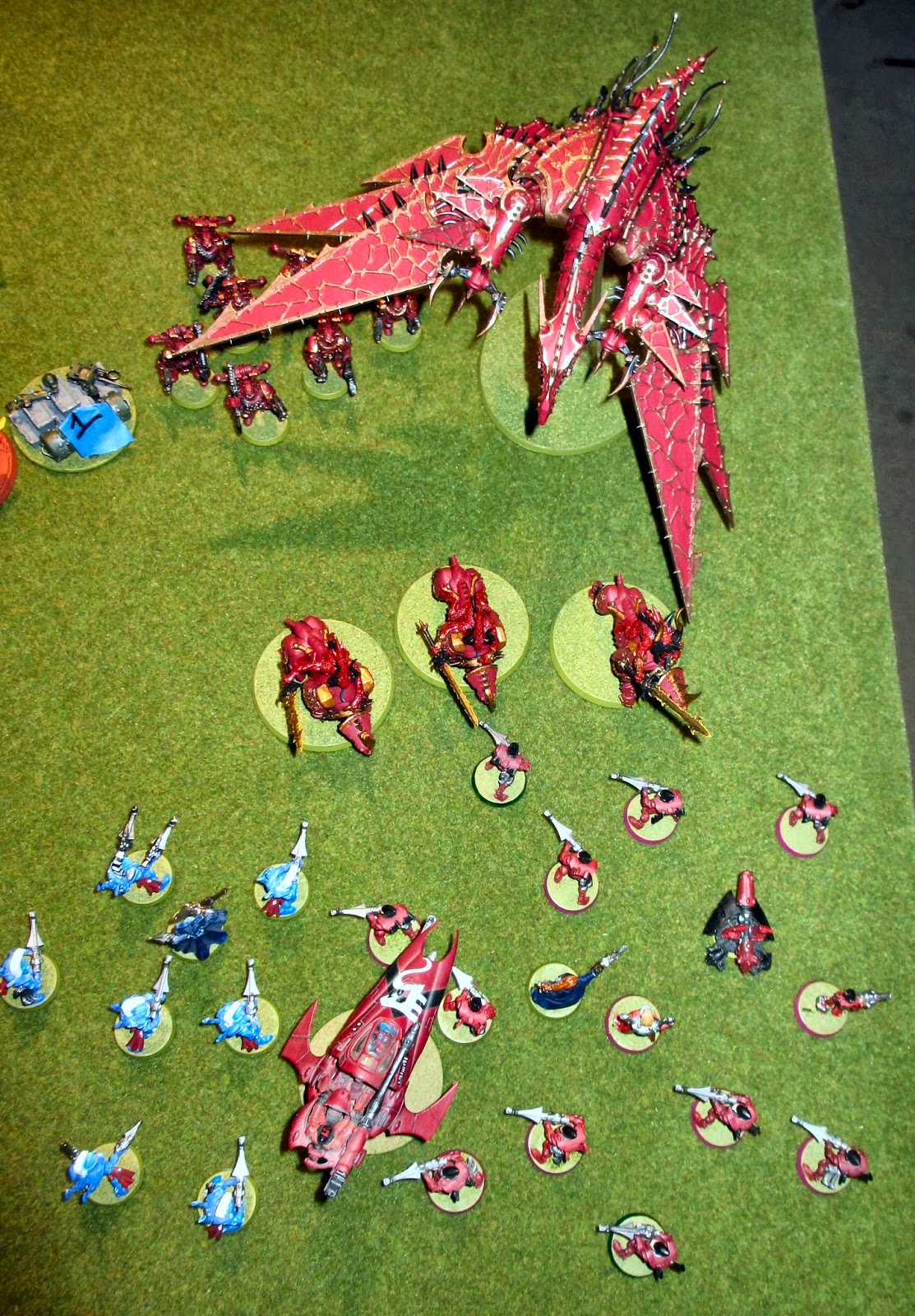 It wouldn't last. I charged the badly damaged Wraithknight with my Defiler hoping to finish it off and keep my momentum going. It didn't work out like that. The Wraithknight put the beat down upon the Defiler. Then came The Blood Angels and Eldar's turn.

With a shot for the ages, the last Vyper took its snapshot and hit my Heldrake with a bright lance. Then Mrs. Blackheart promptly rolled another six to put it down. Arrgh.

For an encore, the five Dire Avengers dropped the Blood Crushers in a hail of Shuriken fire. After Matt's attacks from a pair of Land Raiders, a Predator, and a fire support Dreadnought all I had left on the right flank was the badly damaged Lord of Skulls. Next turn the Lord of Skulls killed the Wraithknight and chopped up a Land Raider but it was not enough. The Lord of Skulls fell to a mass of firepower, leaving only a smoking crater. 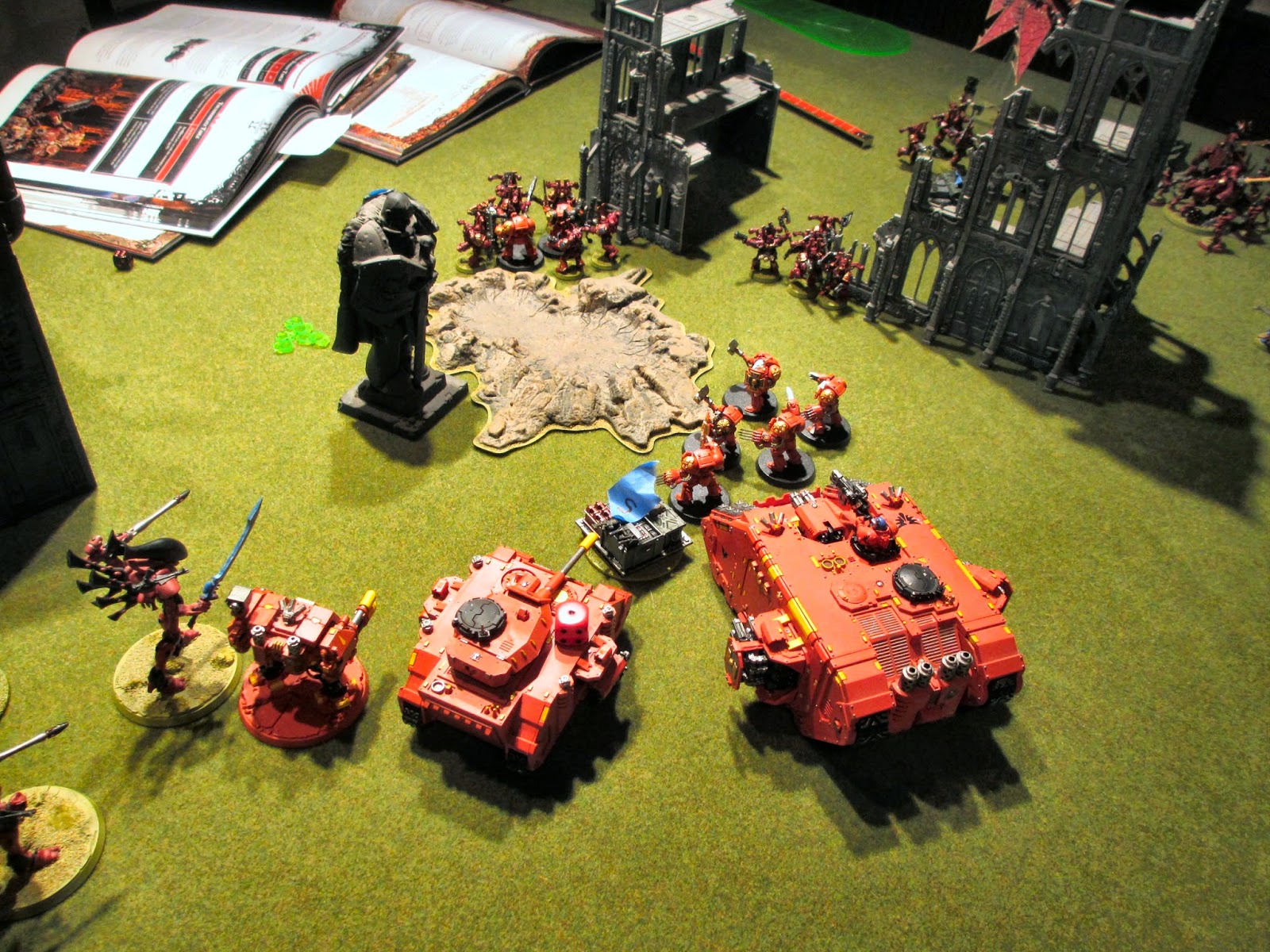 I had rallied a bit in VPs, but still was behind at the end. Victory to the non-Chaos Reds. Now they will have to fight it out to see whose red is supreme!

A good game. We are enjoying the more open style that is 7th edition. We did come up with a house rule regarding Tactics cards. If you get a card that is impossible to achieve you get to discard and draw a new one. By Impossible we mean never possible, as in your opponent did not bring any fliers, or you had no Psykers to start the game with.


The Emperor Protects
And looks good in red.

Posted by Marcus the Blackheart at 12:38 PM No comments:

The Future is here (Again)

Just short of two years and Sixth Edition has been replaced. Getting a new versions of rules is always an exciting time. Will the changes be drastic like going from 2nd the 3rd? Or more of a rules set refinement? Will the new rules completely change how I play? In the case of 7th, the answer is yes.

To be fair, the drastic change is not that huge. The resurrection and re-implementation of the Psychic Phase is smooth, but does put a lot of focus on Psykers. We need to get more games in before we can have a definitive opinion, but for now I think it adds to the game and removes a lot of the clumsiness that Psychic powers had in their timing and execution.

The big dissapointment was no love given to the assault phase. We are working on that for our house rules. The new tweaks that have come up in our first few games of 7th so far work out well. Jink gives you a choice between having to take snap fire shots next turn and having a better chance of being around next turn. The -2" to charge distance into/through difficult terrain just makes things faster. Vehicles are now just a little harder to kill, and that is a good thing.

One of the changes we like the best is the Tactical Objectives. This adds so much to the way you handle your turn and makes you deal with changes on the fly . Some have complained that it is too "gamey". Last time I checked, 40K is a game and does benefit from having choices in scoring systems. The cards (or the D66 table) are random, and I can see how that would upset some people. A bad run of cards can cost you the game, but there seems to be a wide enough variety to make that unlikely. It will still happen though, most likely at the worst possible time. Gaining Victory Points every turn really drives focus and can make for a much more dynamic and exciting game.

I'm sure I will have yet more musings as we get some more games in. Go roll some dice.


The Emperor Protects
It's the only thing that doesn't change

Posted by Marcus the Blackheart at 10:36 AM 3 comments:

It's that time again! I have some good-ish shots left over that didn't make it into a post, but I still want to put up. Enjoy!

Posted by Marcus the Blackheart at 11:36 PM No comments: