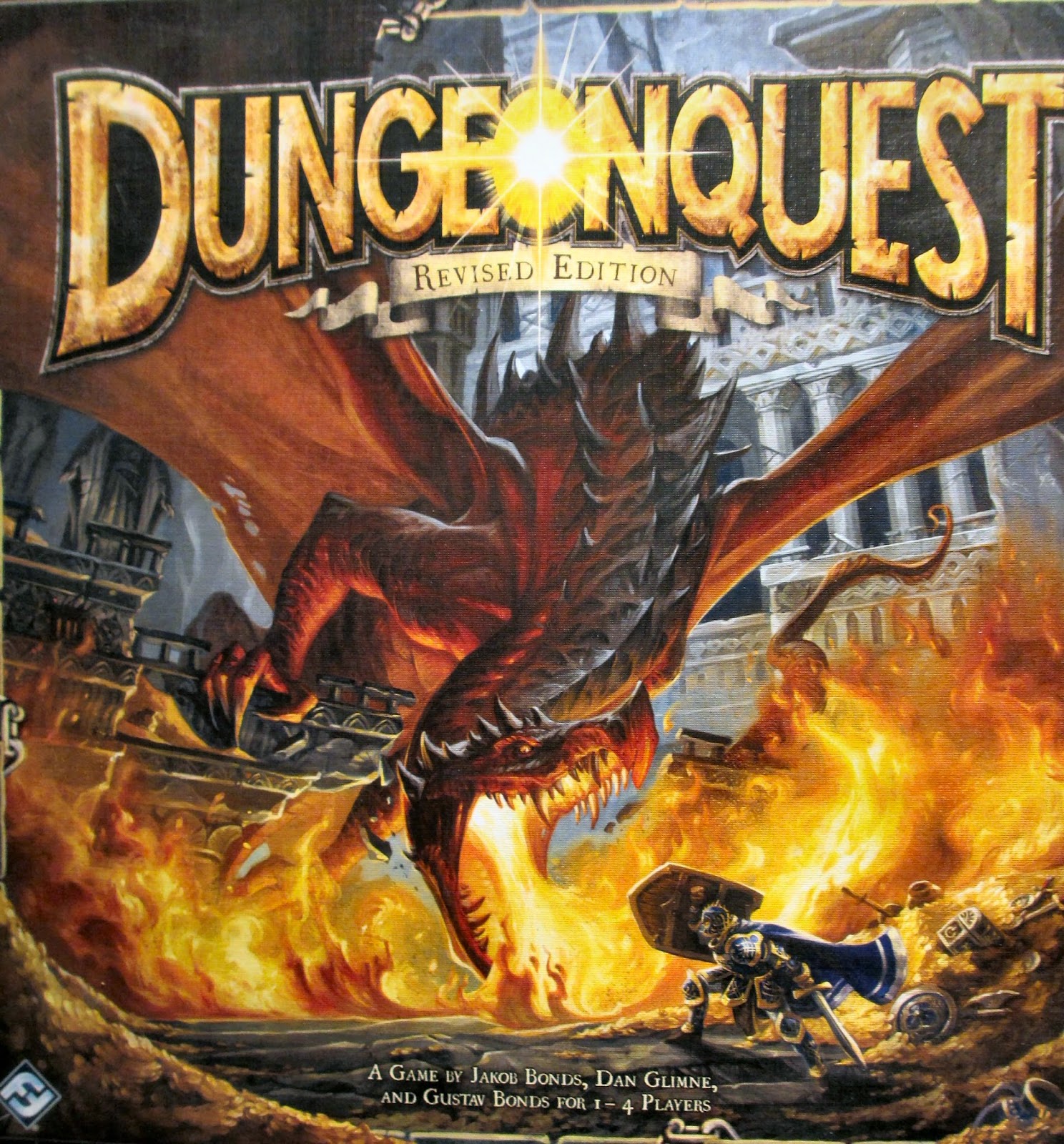 Good old DungeonQuest. Originally a Norwegen game, it made its breakout in 1987 when Games Workshop picked it up and released it in the UK and North America. It fell out of print somewhere in the '90s and lay dormant until Fantasy Flight Games relicensed it in 2010.

Unfortunately, FFG messed with the combat system and made it over-complicated and slow. Thankfully FFG did listen to its fans and now we have DungeonQuest Revised! Basically, they took out all of their changes.

Those of you who are not familiar with DungeonQuest, here is a quick rundown: 1-4 players are sneaking into Dragon Fire Castle to steal some of the dragon's sweet golden loot. Whoever escapes the dungeon with the most loot wins. The map of the dungeon starts as a blank grid with the dragon's treasure chamber into the center. Every turn a player explores a space and adds a room tile or two to the map. 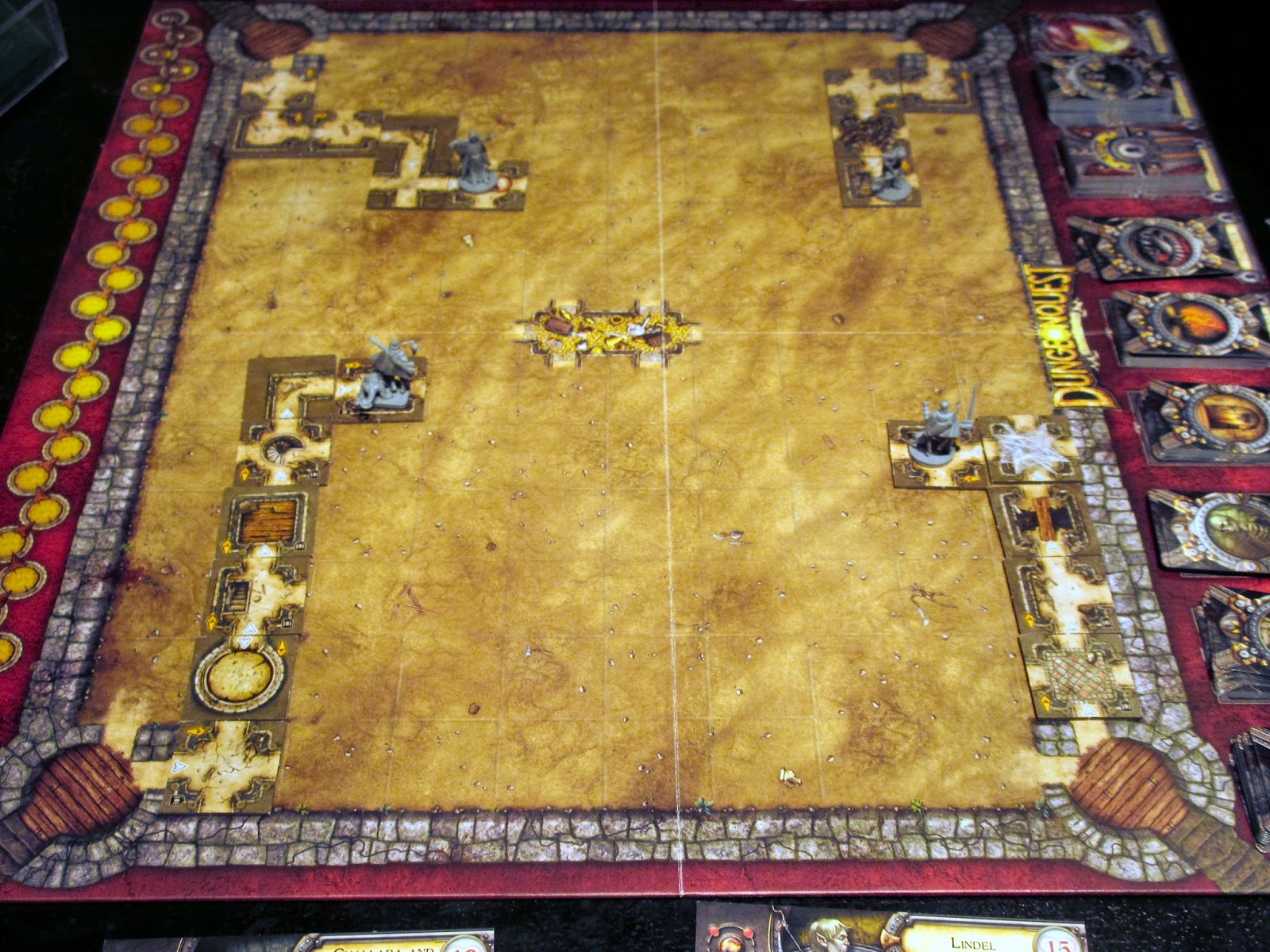 The players must overcome many kinds of obstacles in their quest of gold: traps, moving corridors, and monsters. All while racing against the sun. If the sun sets and you are still inside Dragon Fire Castle, you lose. Once (if) you reach the treasure chamber it's time to grab all you can. If you disturb the sleeping dragon...it will go poorly. Then simply (not really) find your way back out before sunset.

It is a random and often times brutal game. Many times the "winner" was the hero who died last. Having all four adventurers get killed is not uncommon, which is why when we play it two-player we each take two each. 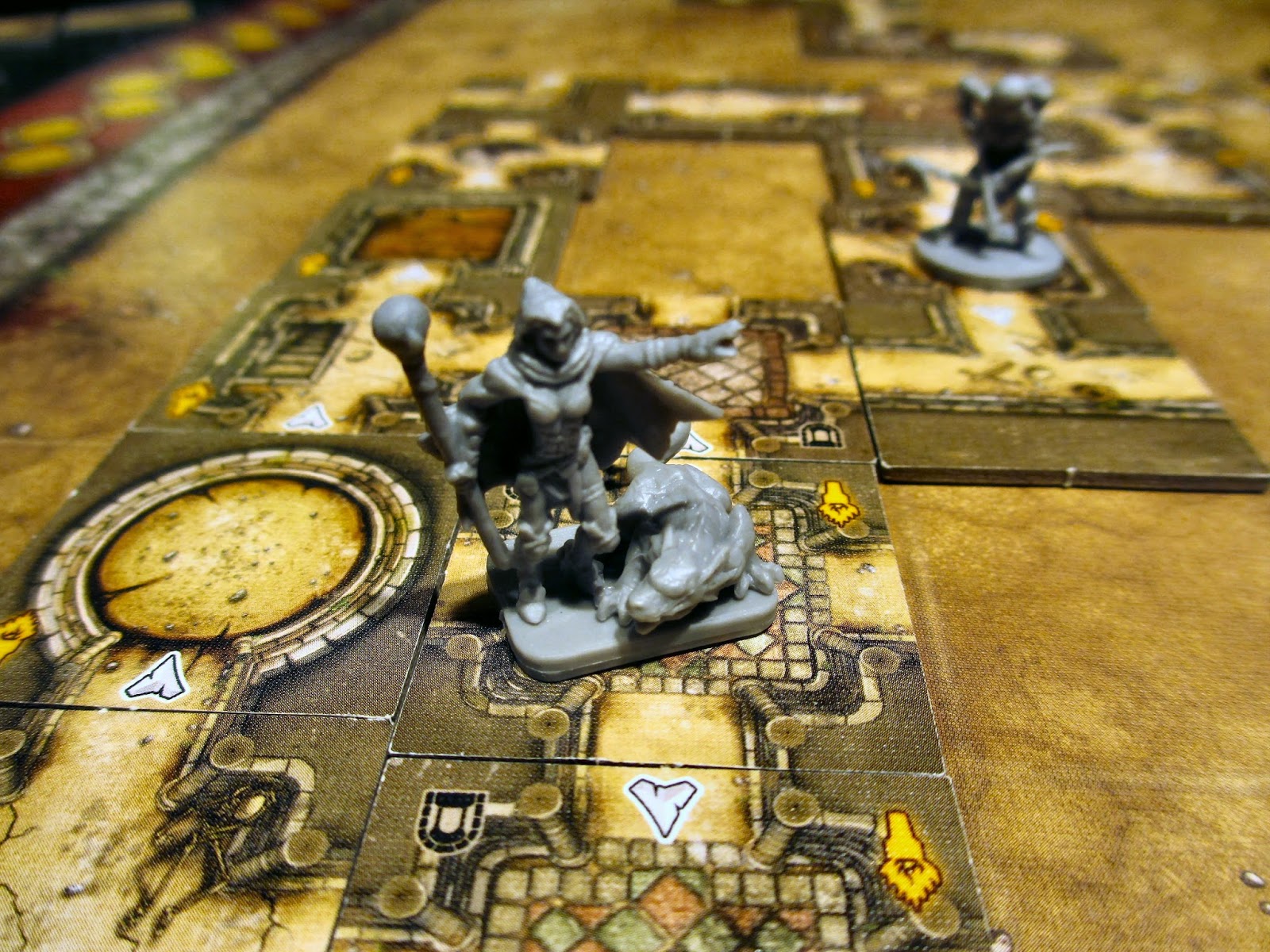 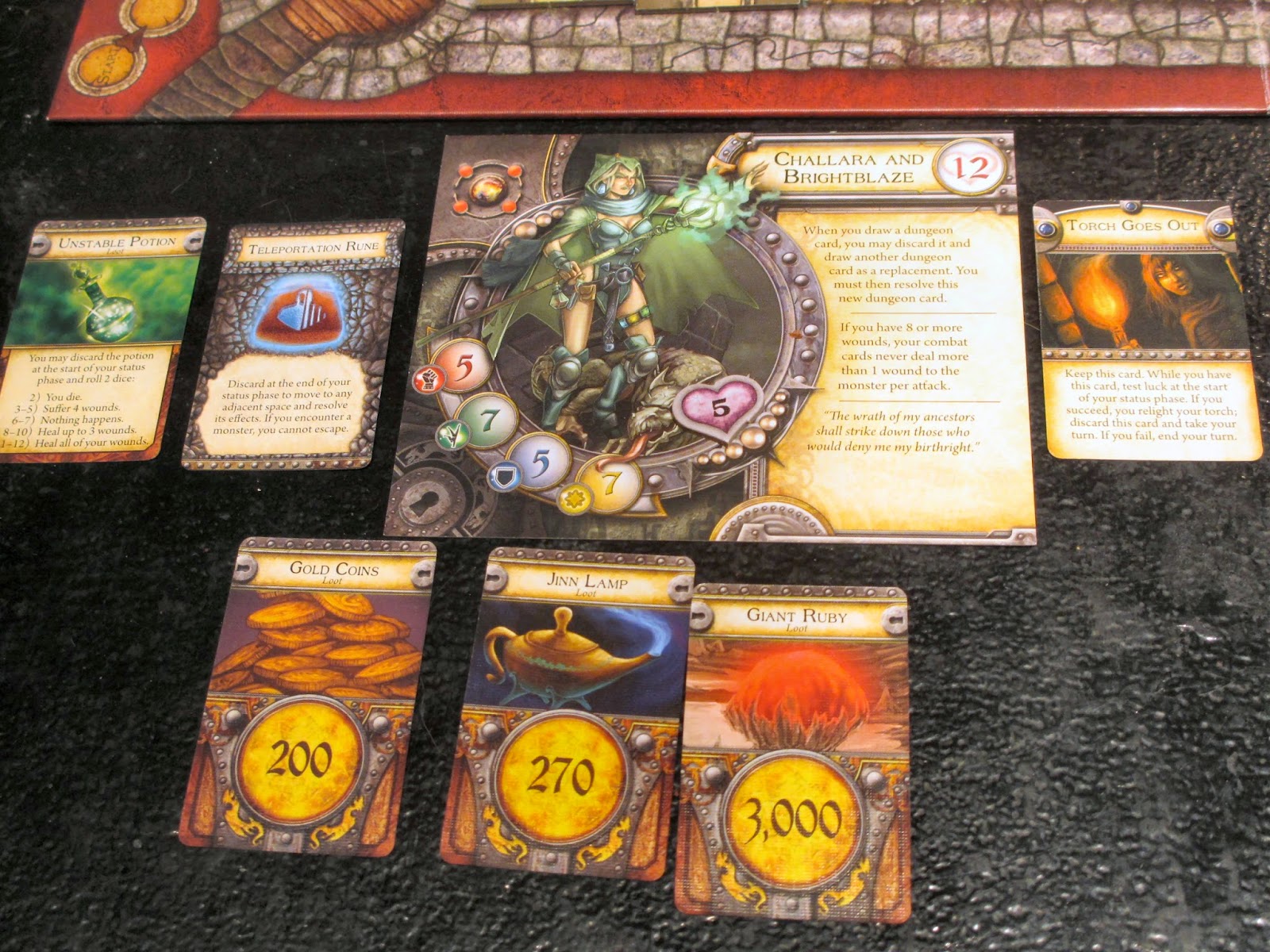 The game is up to FFGs excellent standards for components, and has just had a reprinting. The game sets up quick and plays very fast, with each game taking around 45 minutes. Highly recommended for when you are in the mood for some light, fast gaming. Just don't get too attached to your characters.


Go Roll Some Dice
And Try not To Wake the Dragon

Posted by Marcus the Blackheart at 9:33 AM 2 comments: 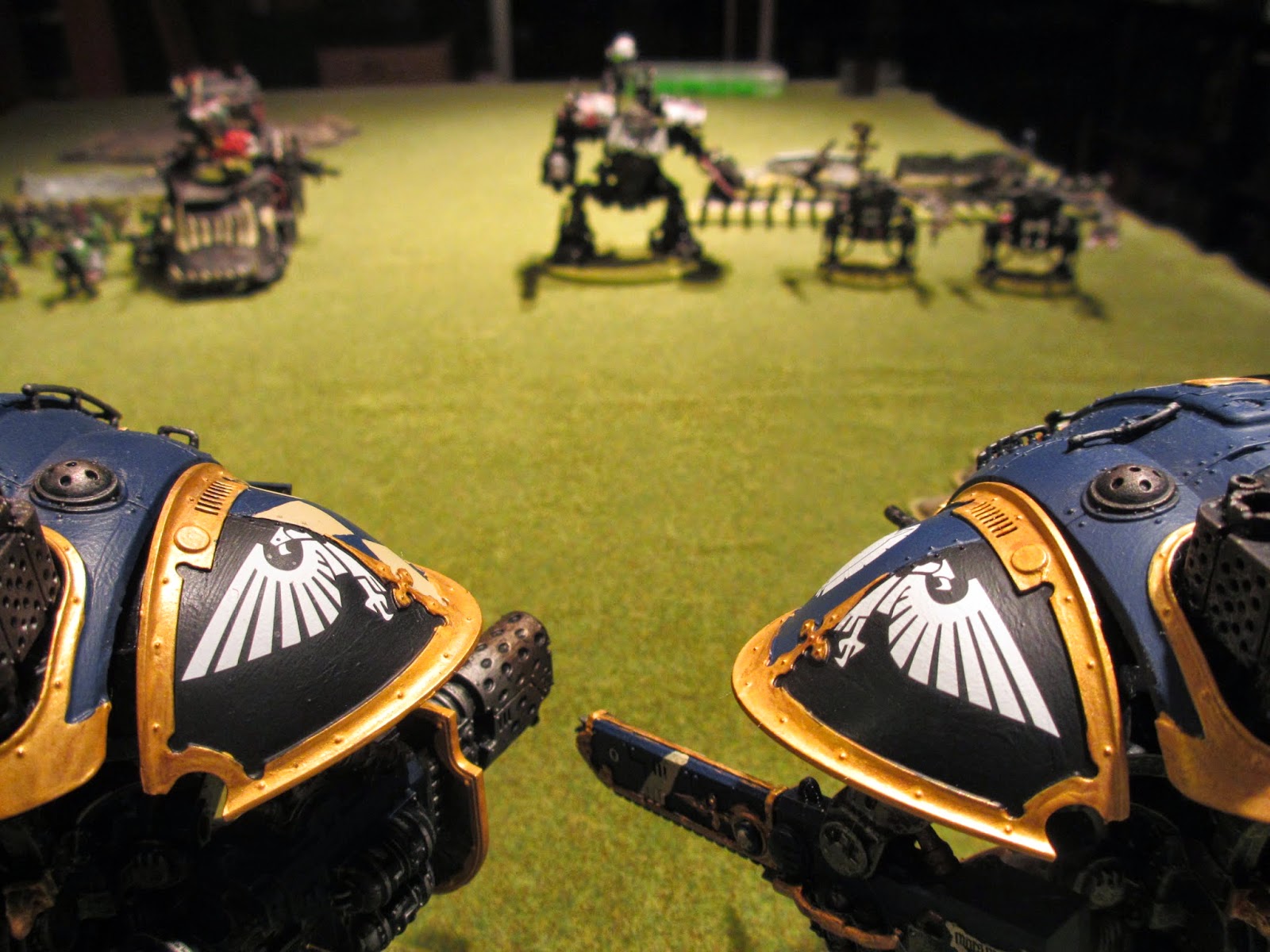 Sanctus Reach, Mission 4. The Knights are overextended and cut off from Imperial lines. The Orks are closing in for the kill, can a spearhead of Guard Armor breakthrough and reinforce the Knights in time?

2500 points per side, the Imperials have ten models, the Orks just about 100. The Knights start on the far left side of the field and must get to the far right side and off the table. Half of the Orks start in the center, the other half will come on from the left side, so the Knights must boogie or get completely swamped. The Imperial Guard tanks all start in reserve and arrive on the right side.

Scoring is really straightforward, and all about the Knights. The Orks get D3 points for killing a Knight, and the Knights get D3 for getting off the table, plus the regular 1 point for killing the enemy warlord. 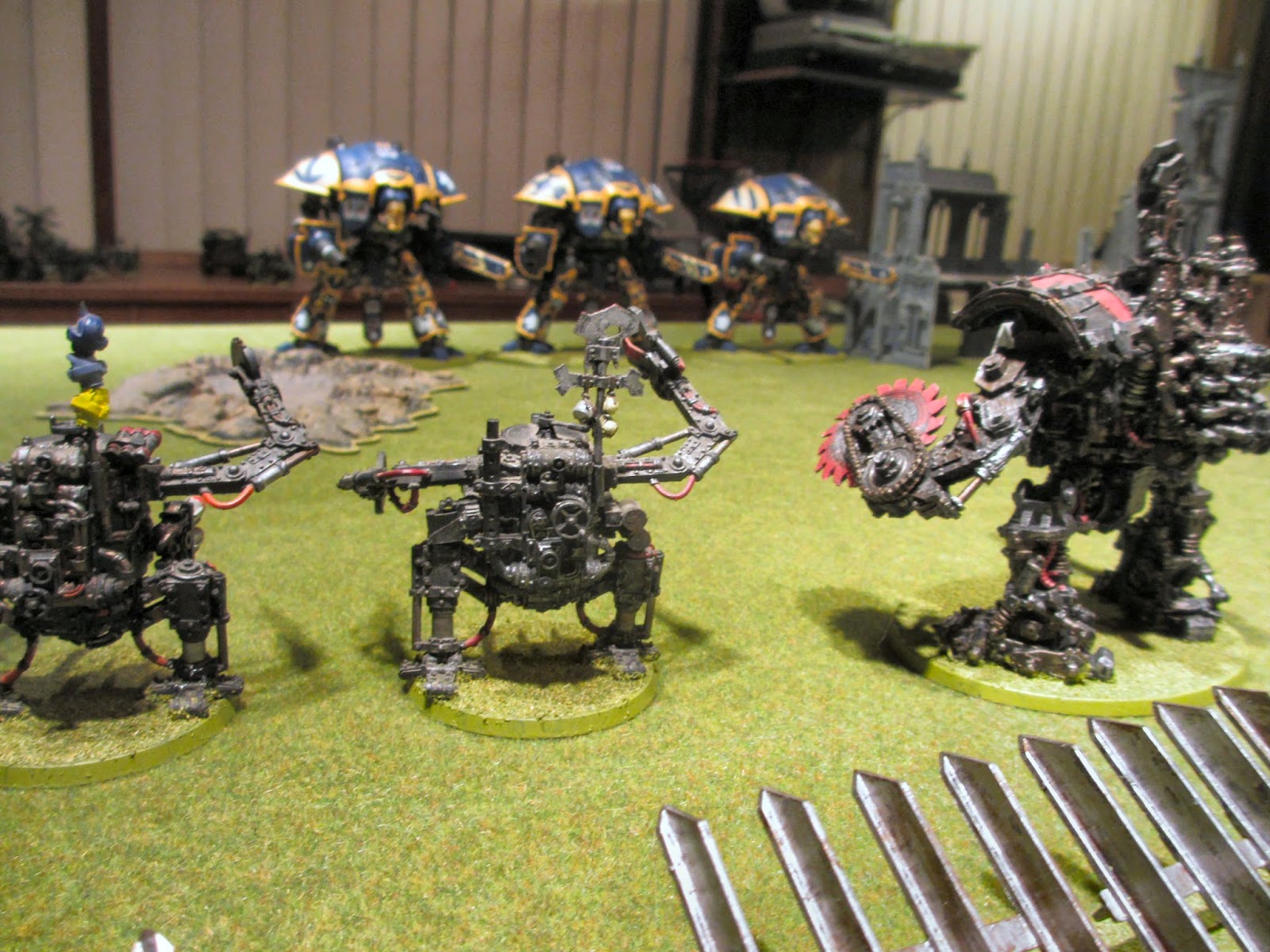 The Knights start by killing off a Deff Dread and put some damage on the Ork Battlewagon full of bad things, but cannot stop it. On the Ork turn, said Battlewagon pulls up close and unloads Grukk Face-rippa and his Mega-Nobz friends. They gleefully hack down a Knight, but the resulting explosion goes quite poorly for the lads. Grukk survives by using the big Mek as a shield, and seven out of eight Mega-Nobz are vaporized. A very costly win. Not that Grukk cares. 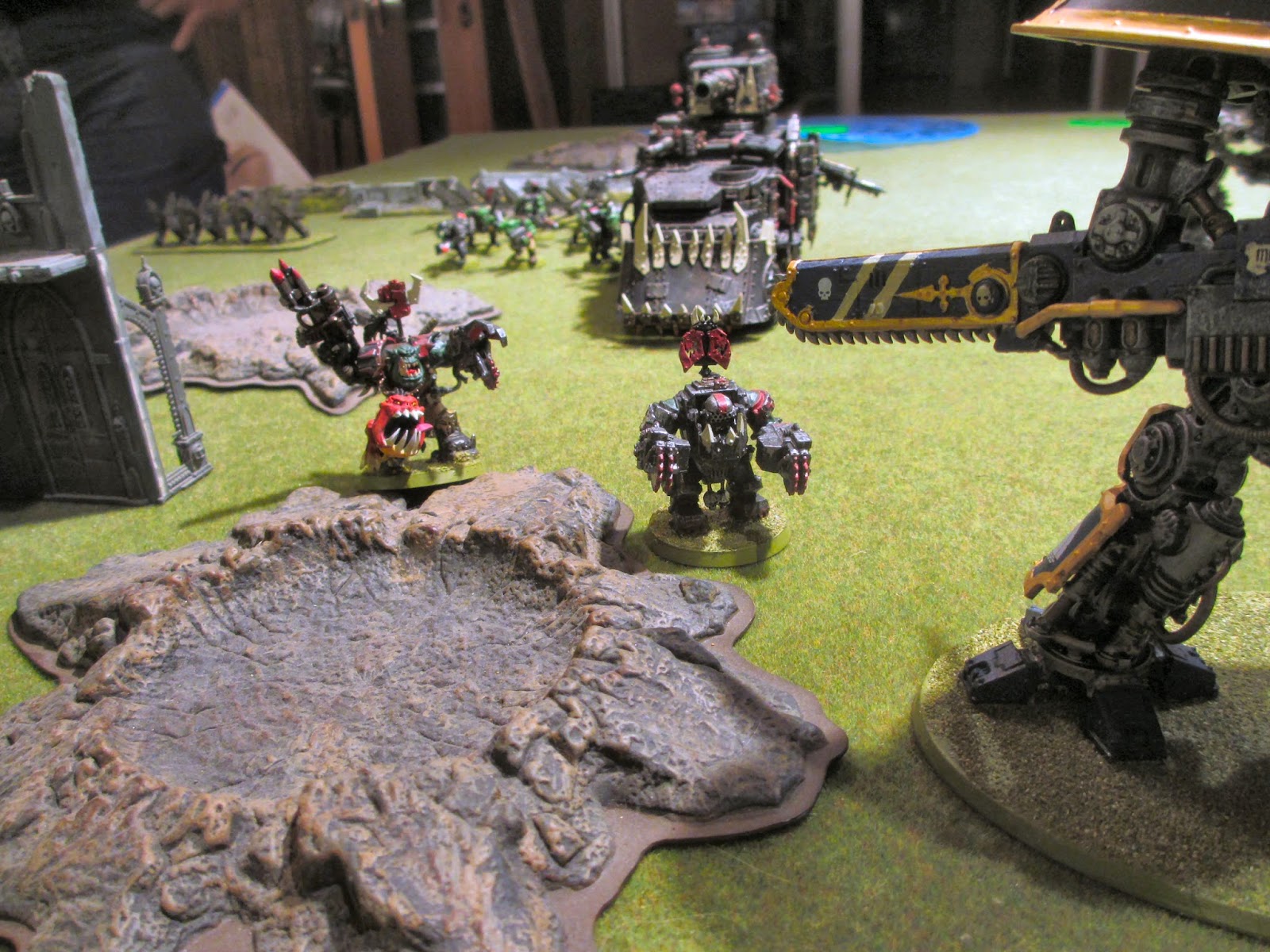 Turn two sees six of the Guard tanks arrive. The Mega-Dread, and a Deff Dread fall to battle and lascannon fire. The last Leman Russ to fire hits the Battlewagon in the rear and kills it with a single shot. Live by open top, die by open top. 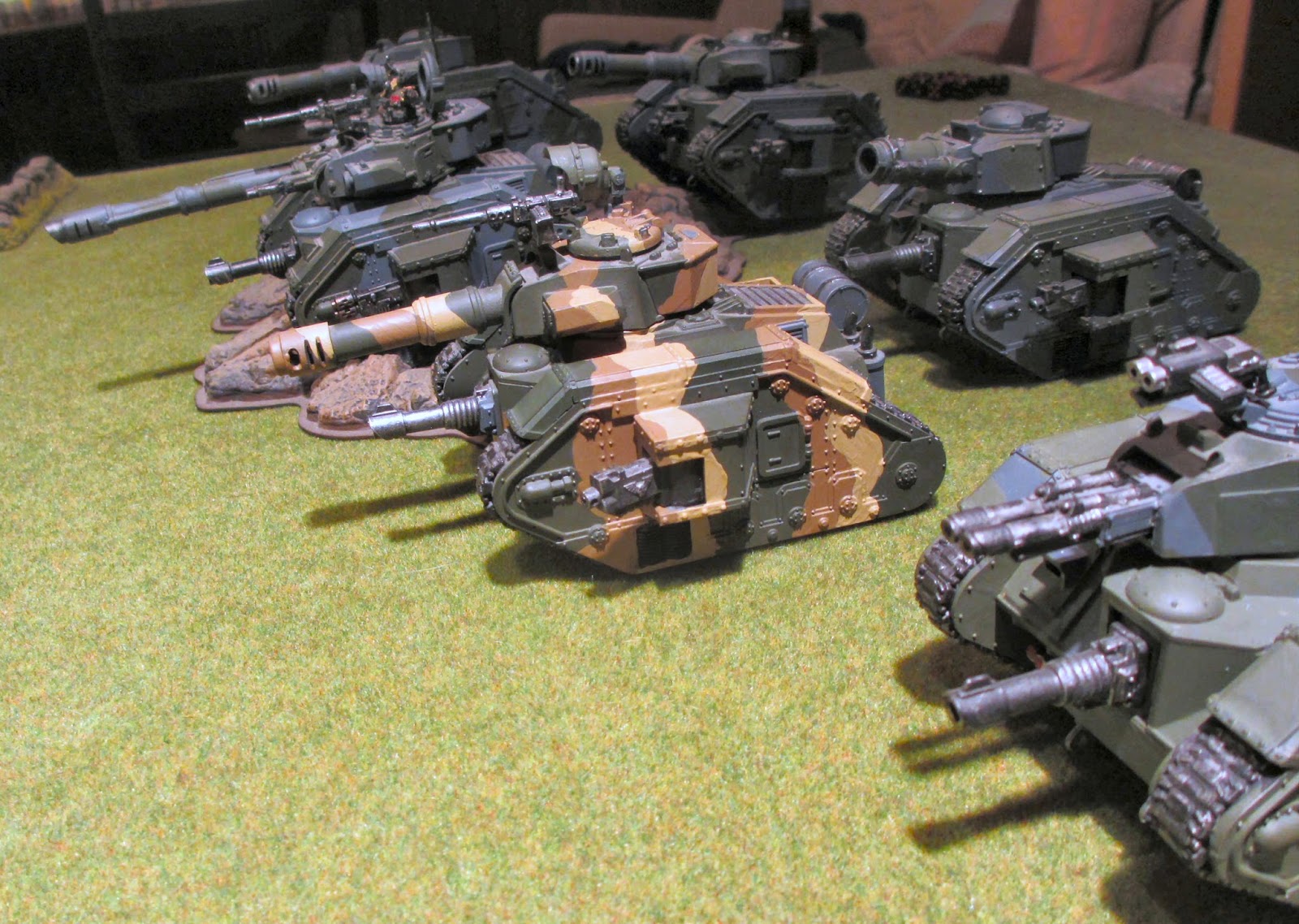 Grukk responds by charging the Knight Errant with his one remaining minon. The Mega-Nob is splattered, but Grukk's stupid luck holds and he is unharmed by the huge chainsword. The Ork Warlord hits with all attacks and the Knight explodes under the onslaught. Grukk is wounded by the titanic blast. He was finally put down by the last Paladin on the following turn.

The rest of the Guard armor showed up and put a hurting on the Orks from across the table. More Orks arrived and managed a couple of points damage on the withdrawing Paladin, but it was too late to stop it exiting the field. 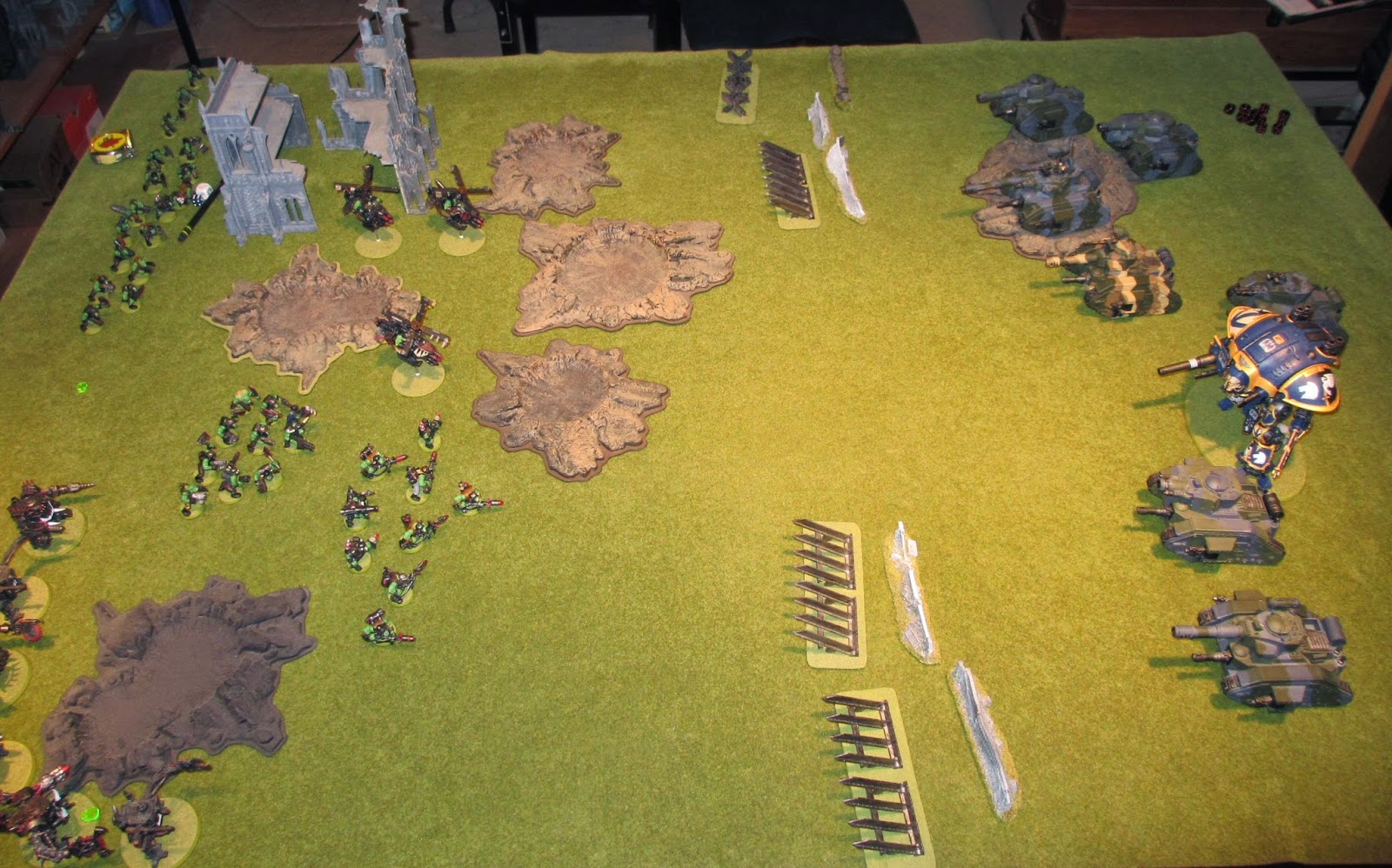 The Imperials fought very well, but that thrice damned Grukk put the game just out of reach for us. Orks 5, Imperials 4. Gah.

Tough situation for the Knights to start with, they needed just a bit more luck than they got. Good mission, I would like to give it another try.

Posted by Marcus the Blackheart at 11:59 AM No comments: 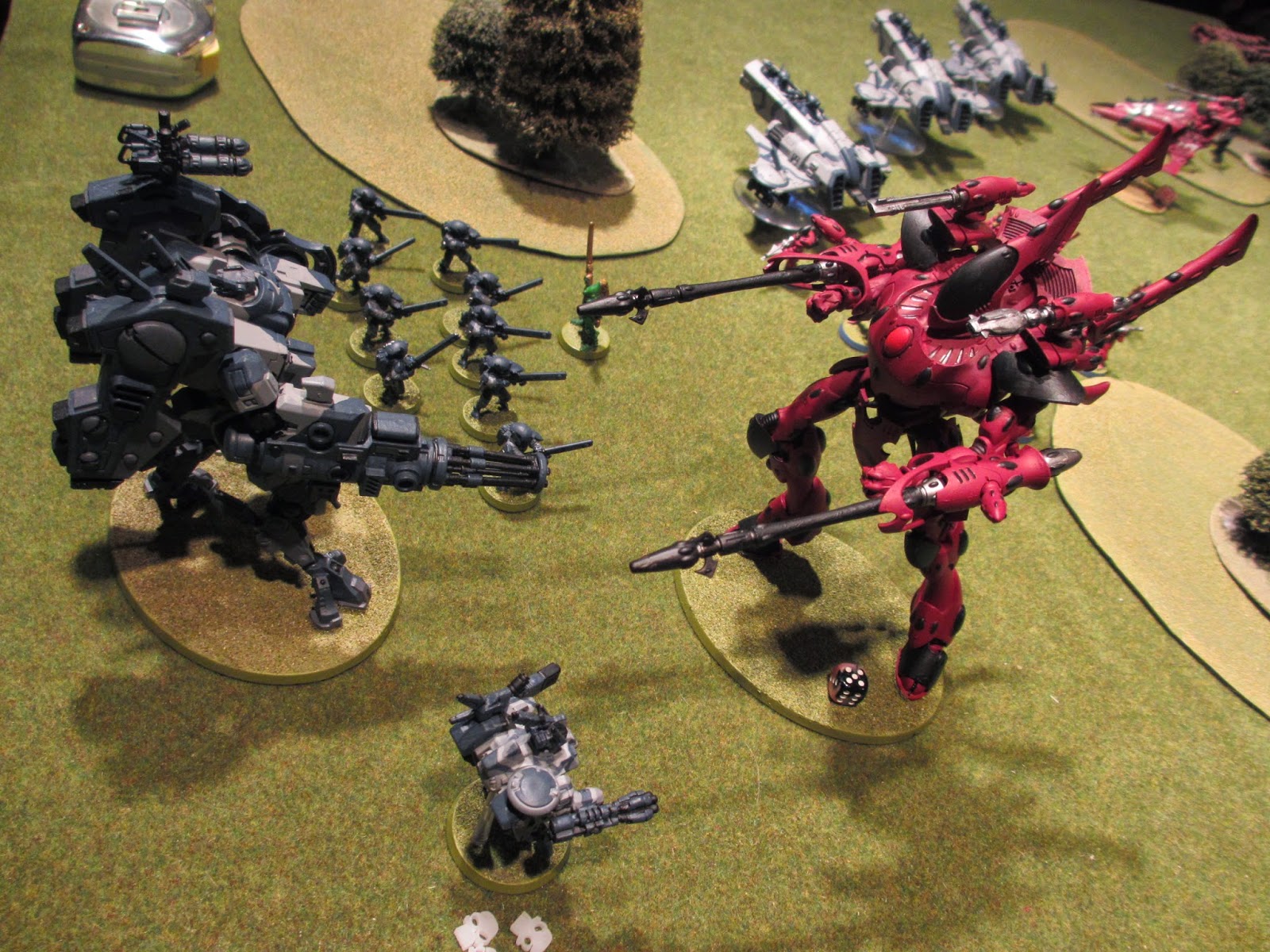 I have a few posts I am working on for your entertainment, but none are ready today. Mostly because I lost track of it being Friday and all. So, here are some pics of a Eldar vs. Tau battle. It was going to be a BatRep post, but things happened and it has been in the standby folder for months now. The text of how the battle went was lost when my hard drive crashed. I can't recall the specifics, but it was a very close battle that went a full seven turns. 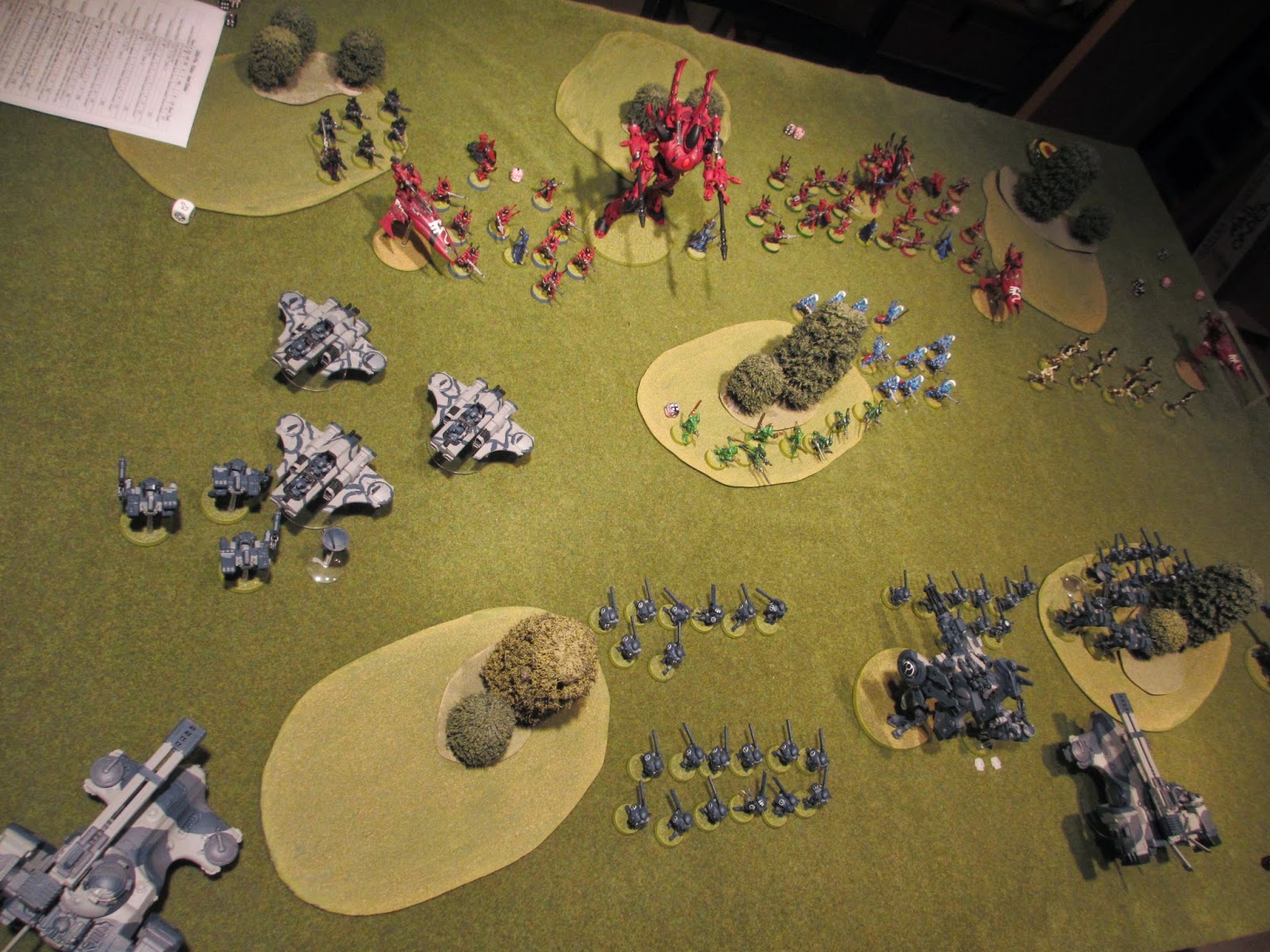 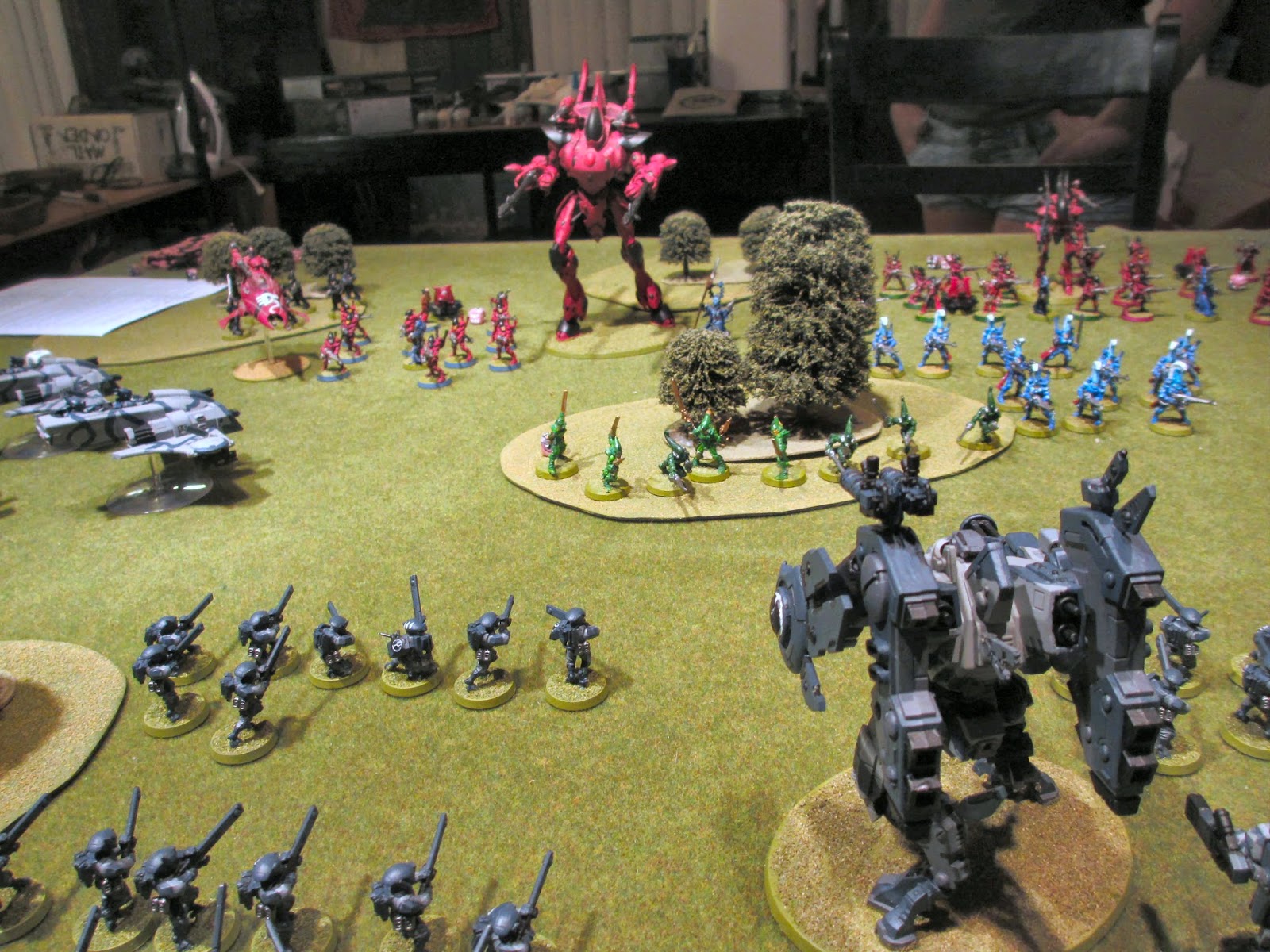 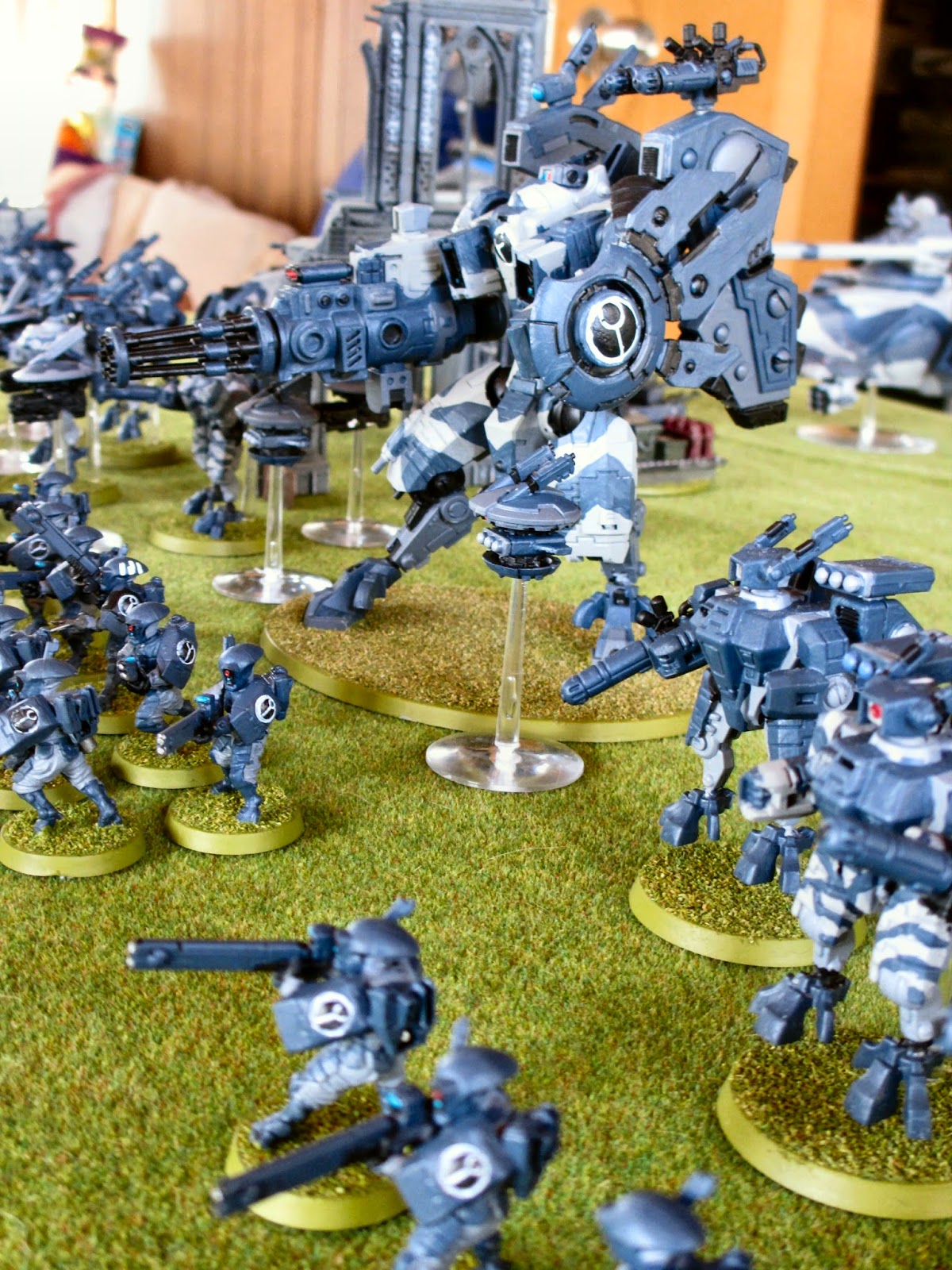 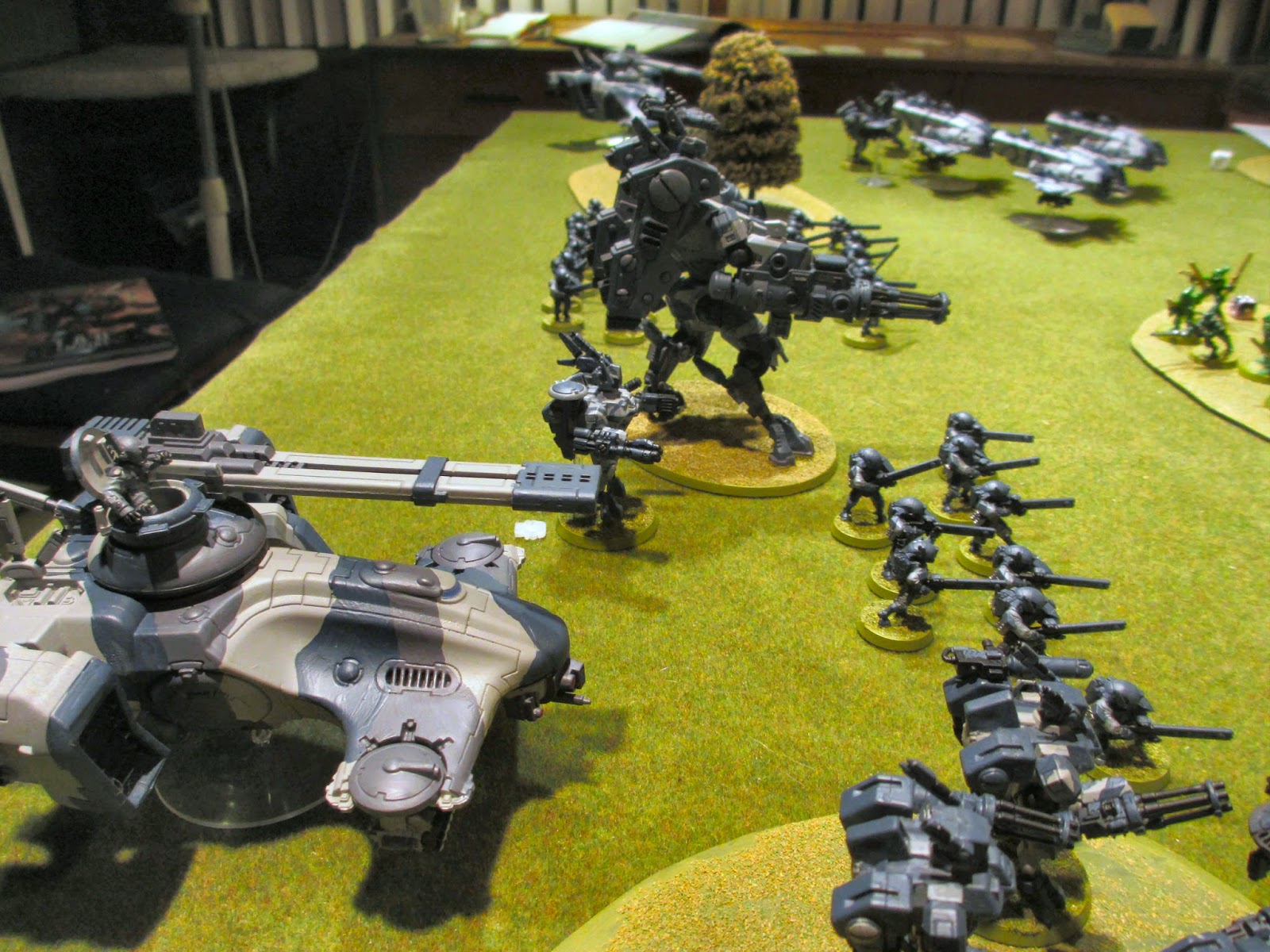 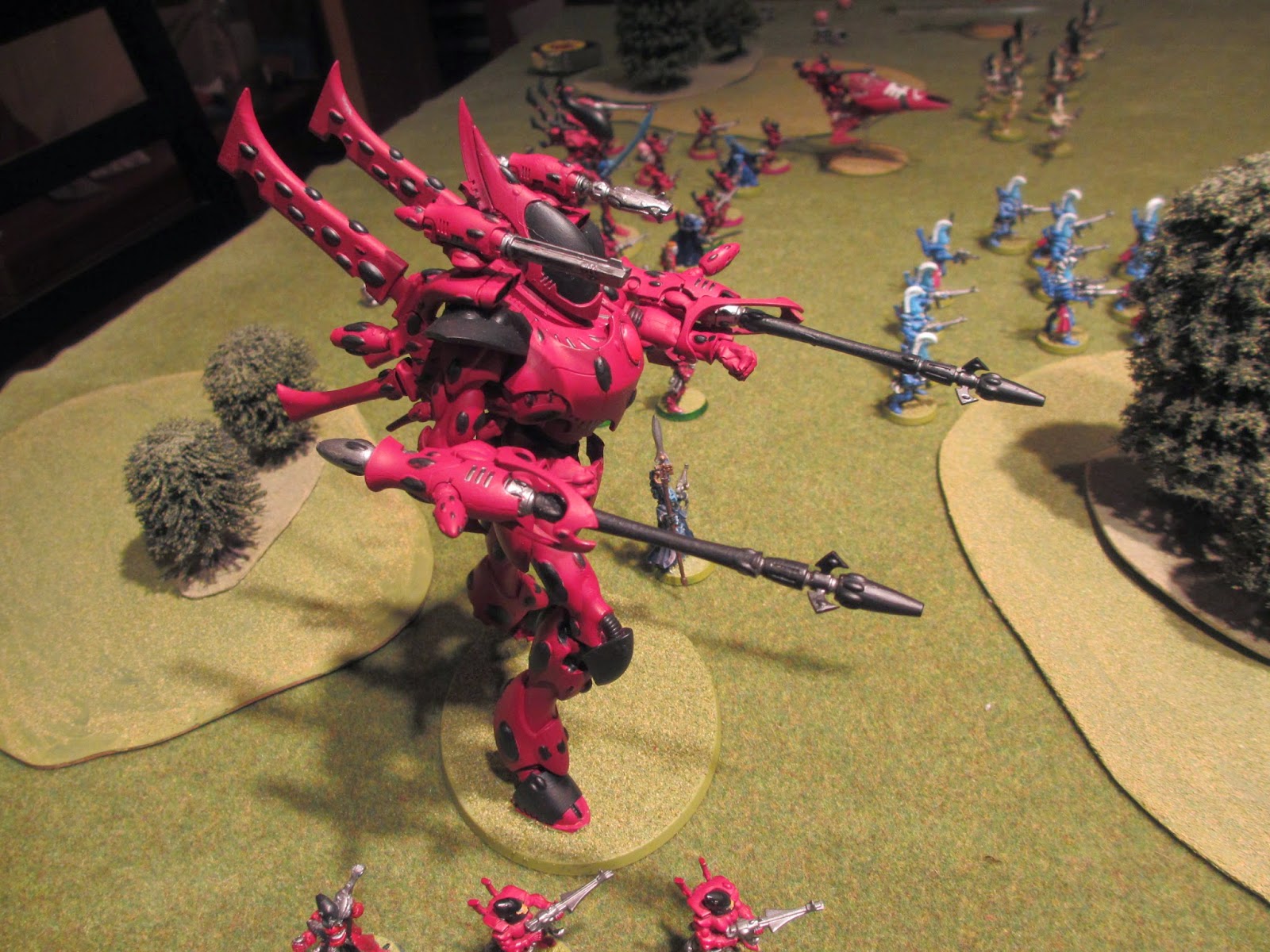 The Eldar were victorious by two victory points. Tau vs. Eldar is a fluid, mobile battle, punctuated by really high firepower, and a lot of fun. Got to give it for the Xenos, they can party.

The Emperor Protects
Let's you and him fight!

Posted by Marcus the Blackheart at 5:47 PM No comments:

The Fall of House Kestren 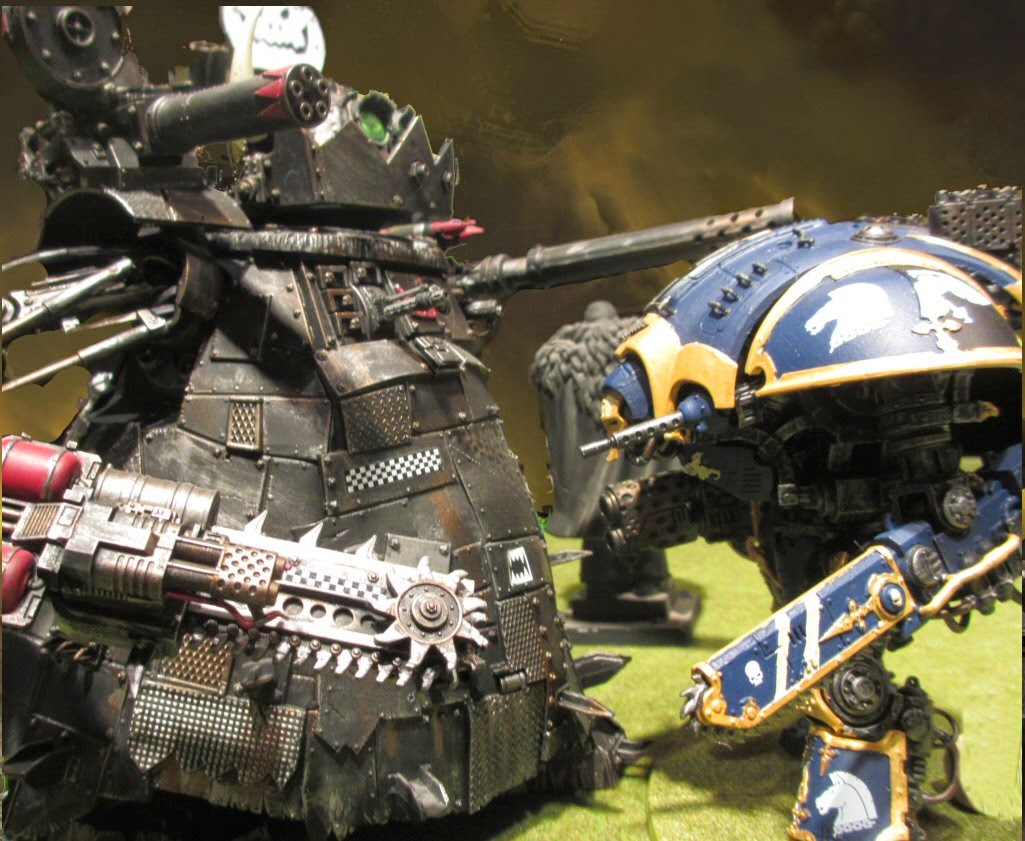 Meanwhile, back on Sanctus Reach, Mission 3 is underway. The Knights reckless headlong charge into the invading Orks is at its end. The good news: the Knights have reached Grukk's grounded flagship. The bad news: The Knights are overextended and surrounded. And Grukk has a Stompa.

The mission starts with all the Imperial Forces on the table and the Orks "only" have a Stompa. Said Stompa did four hull points to the Knight Errant and turned two Chimeras into swiss cheese. 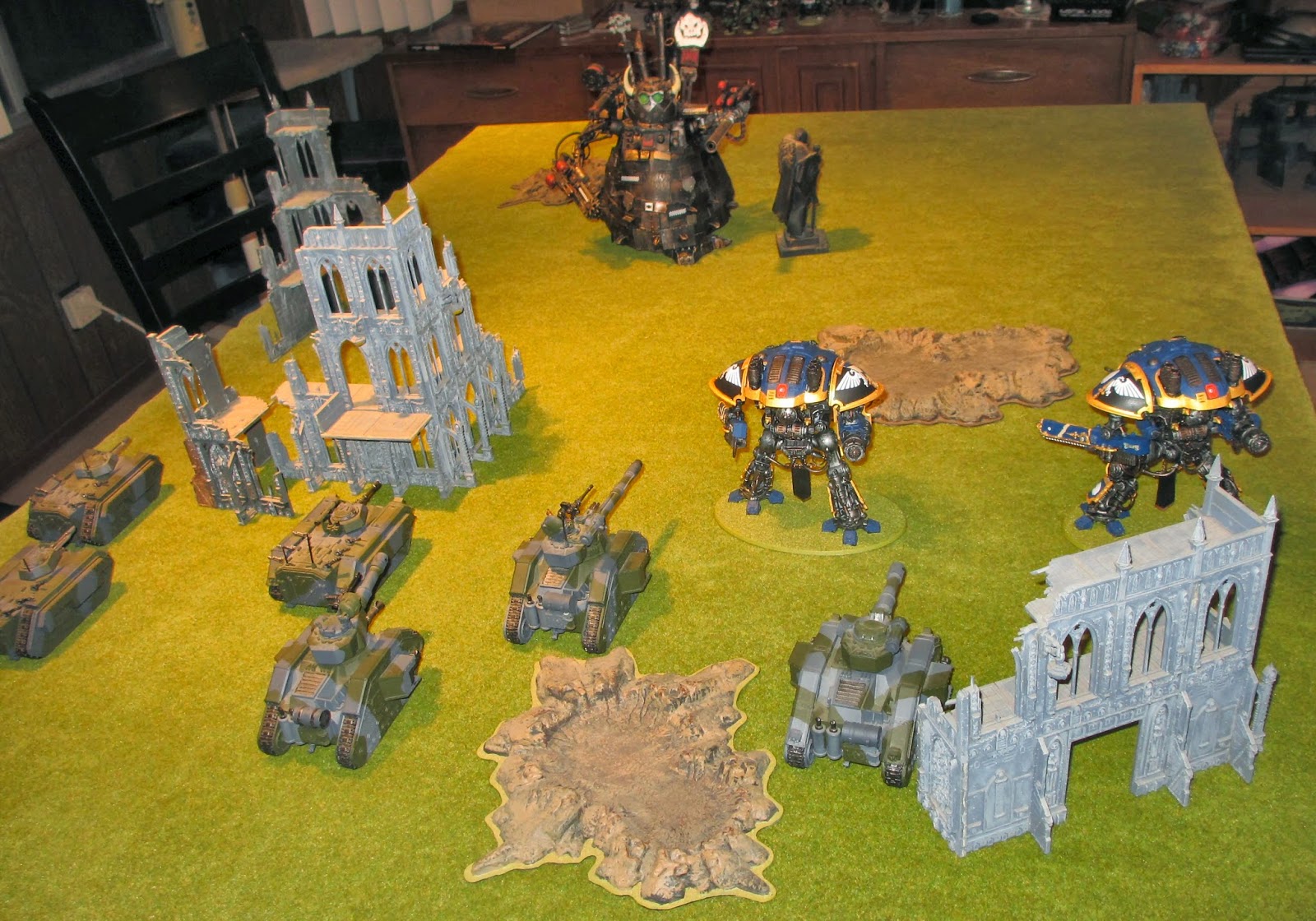 The Guard and Knights had some very fine shooting with most weapons hitting. Mrs. Blackheart's rum-fueled force field prevented most of the damage. So many hits so little damage! A very disappointing shooting phase led to the assault phase. The Knight Errant made a 10" assault into the Stompa and tore into it. Sadly the Stompa still had one HP left and dispatched the damaged Errant.

Even with a -1 to her reserve rolls the Orks arrived en masse and outflanked us. Once again we were too close to the table edges and paid dearly for the mistake.
Needless to say it went horribly wrong. Deff Dreads everywhere, and those damn tankbustas well within charge range. The Orks shooting was predictable Orky, with no losses on the Imperials side. The Assault phase was also very Orky, with high losses for the the Knights and Guard.
The Paladin was taken out in frenzy of tankbusta bombz, and I lost a Leman Russ to a very grabby Deff Dread. On my turn I was able to put down the Stompa,but was far too late to save this game for the Imperials. Turn 3 was the end for us. I was left with my HQ Vanquisher and a few Guardsmen on foot surrounded by Boyz. Final score Orks 11, Imperials 5.
Had we paid the slightest bit of attention to the possibility of being overwhelmed by jerks using outflank we would have put up a better fight. As it was the battle captured the feeling over being overextended and then cut off. A fun game, if a quick one.

Posted by Marcus the Blackheart at 12:42 PM 2 comments: