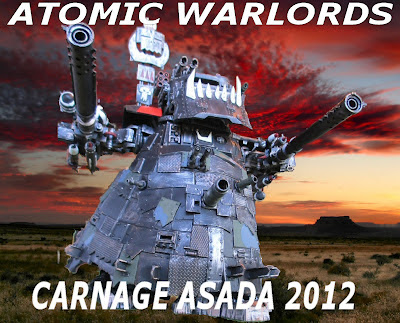 Time for the tabletop slaughter and BBQ that is the Atomic Warlord's second annual Carnage-Asada!

This years event was a 15,000 point Apocalypse battle between the Imperial Guard and their somewhat shady Eldar allies versus a whole lot of Orks. 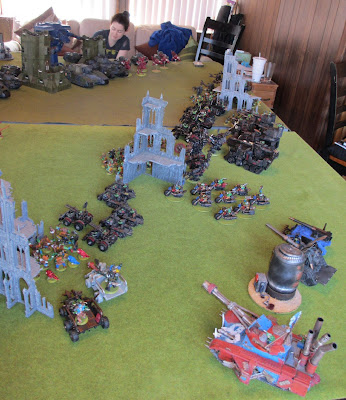 The Ork players (Pete and myself) made two huge mistakes right away. We didn't add enough terrain to the field and created a huge cover-free killing zone in the middle of the tables. Then I decided it would be best to hold the Two Stompas and the Deffcoptas in reserve. Spoiler alert: Bad plan.
The Allied forces took the first turn, and Jeff wasted no time in wasting scores of Orks. All three of my Battlewagons and all four Trukks went up in Hollywood-style fireballs.
It was at this point the magnitude of their deployment error got through the Ork players rum addled brains. By giving the Eldar and Guard forces only one super-heavy to shoot at they were free to decimate the Ork troops for two turns.

One of our cunnin' Ork stratagems "Rok 'em boyz" was a lot of fun and did a fair bit of damage to the Guard. We will be using this very Orky bit again. At the bottom of turn two most of the Orks were off the table, but here come the Stompas!

They torn into the Eldar and Guard. The Shadowsord and Baneblade were hit hard. A Fire Prisim, two Leman Russ and a Falcon were erased from the table. Could this turn the tide of battle? 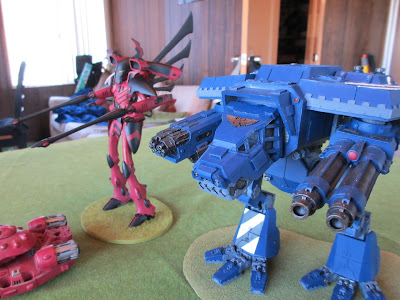 Not a chance. Jeff unleashed the Warhound Lupus Rex on Boss Mauler... 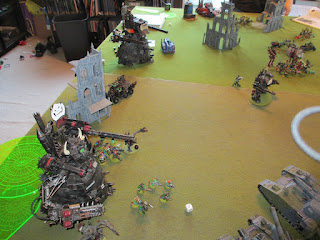 Two Turbo-Laser Destructor hits, resulting in two chain reactions ending with a Apocalyptic explosion.
The sixteen boyz and the last Deff Dread standing too close to the Stompa never knew what hit them.
The Eldar Titan took down Gunhead with some help.
And that was it for the Ork assault. Then we had great BBQ.

Thanks to all the Warlords for another fantastic Carnage-Asada!

The Orks demand a rematch! This time we will devise our cunnin' plan before we start drinking! 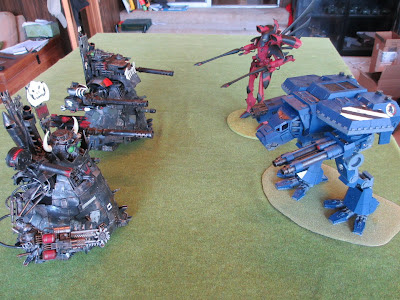 Posted by Marcus the Blackheart at 11:30 PM 3 comments:

The final round of the Non-Powered Armor League saw the Ork Hordes take on the Tyranid Swarm and The Dark Eldar attack the Tau. The mission was Annihilate. And that is what all four armies did.

Hive Fleet Tiamat once again came on like a living tide, forcing Warlord Grimjaw to dig deep and use every bit of cunnin' at his disposal. Resisting the strong urge to just charge forward and meet the mass of 'gaunts head on, the assault units of the boyz hung back and let the the large amount of firepower reduce the swarm a bit.


A series of hand to hand to claw combats covered the entire field in no time. The fights were short, sharp and decisive. A very close game that could have easily gone the the Tyranid's way if not for a cold roll here and a slightly different decision there. The Ork shooting was above par for the most of the battle, and played a key role in their victory. The Zoanthropes under-performed badly, and the Tyrgon showed up far too late to make a difference.
And on the other table The Dark Eldar got to go first and swept across the field and into the awaiting Tau. 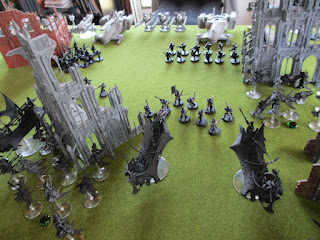 A truly epic slug fest erupted that lasted seven turns. When the dust had finally settled, the Dark Eldar pulled out a Major Victory.

Overall, the League went very well. Many hard fought battles and a few absolute slaughters. Next time, we should have some work-up battles before the League kicks off.

I would like to thank my fellow Warlords for a fun time. Matt and Jeff get a special thanks for being brave and taking armies they were not familiar with at all. It was great to see Pete finally bring his Tyranids onto the field after such a long time. How long? That is a tale for another day.

Now it is time to prepare for the Warlords annual Memorial Day Apocalypse battle & BBQ, Carnage-Asada!

Posted by Marcus the Blackheart at 12:15 AM 2 comments: