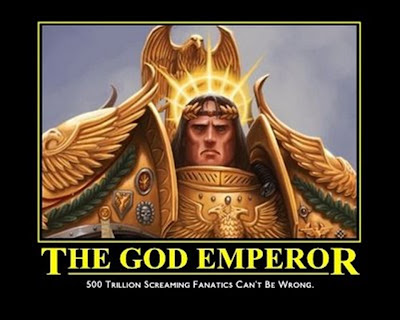 September 29, ? The Emperor of Man is born. We don't know his name, we don't know what year, but we remember the date. Or we did back when Games Workshop put out the awesome 2002 Calendar.
Is it canon? Doesn't matter. it is a great reason to have a big game and cake!

We tried a narrative mission this time. The Imperial forces on Zircon IV are having a parade in honor of His birthday. All is going well until the fell forces of Chaos show up.

3,000 points per side. Matt brought Blood Angels, Gillian and Jeff commanded the Imperial guard. Pete's renegade guardsmen and cultist where backed up by my World Eaters. 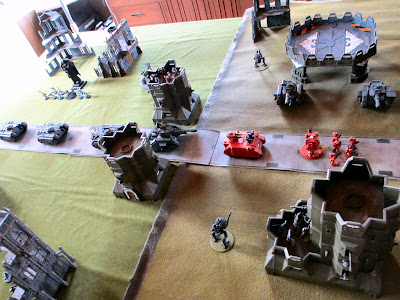 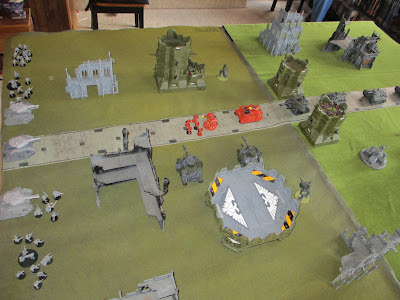 The Imperials started out in a vulnerable position, but only the renegades were on the table to oppose them.
Turn two saw a disturbance in the warp and only three out of eight World Eater units showed up. Not good.
A bunch of Blood Angel Assault troops arrived dead on target and took it to the cult and renegades.
On turn three, a handful more World Eaters showed up. And so did the rest of the Imperials. 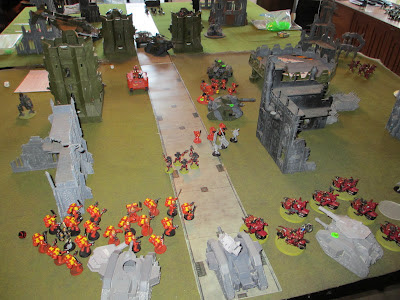 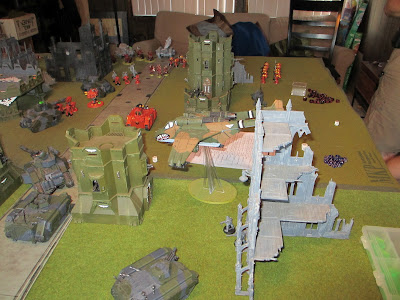 After a very good shooting turn for the Imperial lap-dogs the writing was on the wall. We called the game after four turns in favor of the Imperium. Then there was BBQ and birthday cake.
A fun game, I would like to try it again after the new Chaos codex comes out next week.
Which will lead to my next batch of modeling and painting madness.


The Emperor Protects
Especially on His Birthday

Posted by Marcus the Blackheart at 7:27 PM 2 comments:

The +4 big box of plastic krak arrived at my door yesterday evening. It did not disappoint. 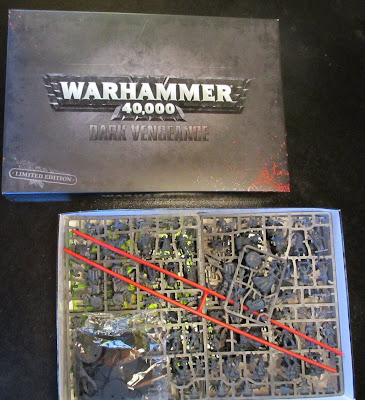 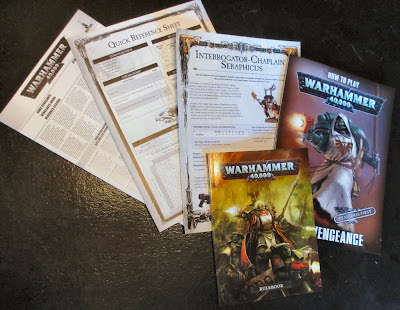 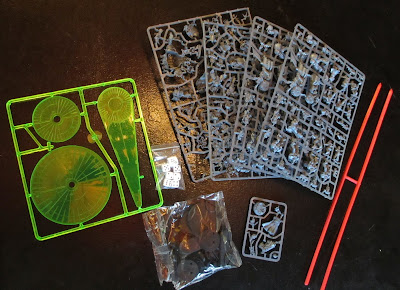 The 40K box set have always been something special, all the way back to the 2nd edition. This time out we get two forces that have yet to headline, the fell forces of Chaos, and near and dear to me, The Dark Angels.

I spent last night putting the models together. All went smoothly, I used just a bit glue to keep them in place, but this is not at all necessary. Except for the Chaplain, he has to be glued. Cutting the models off the frames was a bit dicey in a few cases, due to a couple of long thin parts; the Dark Angel Captain's sword & head come to mind.

I have played Dark Angels since they were black. We will be getting to my collection once the new Codex comes out. I will happily add these the new figures to my army. 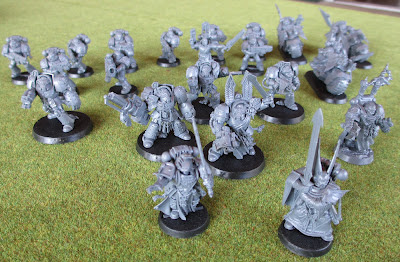 The Chaos models are damn nice as well. The huge Hellburte, The Chaos Lord and his six chosen buddies are all great additions. 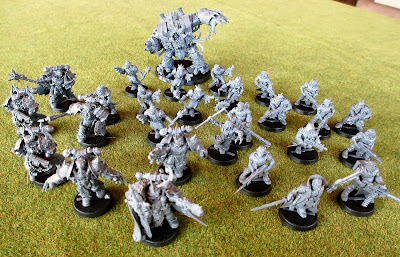 But the most welcome is of course the cultists. A missing element from the game for a long while now. Important to the fluff, lots of fun for a campaign, and all around fodder, it is great to have them return in grand style. Hopefully the cultists box set will become a reality.

We are going to play thought the six missions that came with the set, just for fun. I'll report on that soon.


Posted by Marcus the Blackheart at 1:29 PM 2 comments: