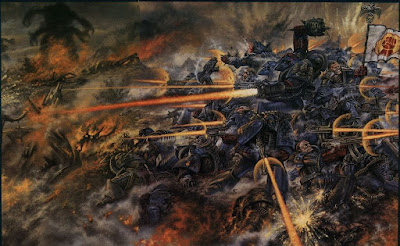 With the release of the Tyranid Codex, now everyone here has at least one "real" codex. So it is time for a league! We are going to do a escalation type:

2 matches at 50PL, 2 at 75PL, and the final two at 100PL. Then some kind of grand finale at 125. The matches will be every two weeks, starting the weekend after Thanksgiving.

We have some interesting rules to go with our league:
No Flyers for the first two matches.
No Lords of War for the first four.
No Fortifications.
You will know the mission and opponent ahead of time.
You may change your list every battle, but must keep your faction.

Knowing the mission and at least what enemy you are fighting gives you the ability to somewhat tailor your force for the upcoming battle. It should make for some good matches.

The battle reports will of course be posted here. The  schedule will be as well, over there, on the sidebar -->.

May Your Dice Roll Well
At Least Better Than Normal


Posted by Marcus the Blackheart at 11:30 AM No comments: 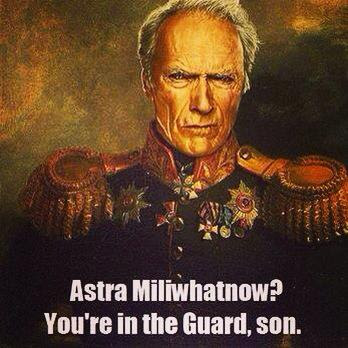 I really like the new Guard Codex. I have a Steel Legion army, so it works great for me. Lots of tanks with mech or leg infantry. I "only" have six infantry squads so I don't really run into any problems with the battleforged detachments as my HQ slots are full of HQ Tanks and maybe a Company Commander.

The Codex does have a few quibbles. Most stem from the fallout from the dissolution of the Platoon structure. Platoon Commander, Command Squads, Infantry Squads, Special and Heavy Weapon Teams are all separate selections now. For the most part I enjoy the new found flexibility. It doesn't work for everyone though.

I have been talking with Peter who has a good sized Catachan force. His army is very infantry heavy, so to put lots of squads on the table he needs to take multiple detachments.

One issue shows up when it comes to HQ choices, the Guard doesn't have many. Peter doesn't have Tank HQ, Commissars, or Psykers in his Jungle Fighters, so that leaves him with Company Commanders. Four of them if he is to take two Battalion Detachments. Perfectly functional, but not very fluffy.

For reasons unknown, the Platoon Commander is an Elite and not a HQ.

The Platoon CO and the Company CO are the same PL points (2) which is odd. The Company CO is a little bit better, with one more wound and leadership and can use Voice of Command twice.

The simple fix that GW should do is make the Company CO 3 PL again, and move the Platoon CO to HQ. I'm going to suggest this to them, and if you agree, you should too.

The Emperor Protects
The Most Dangerous Thing on the Battlefield is a Junior Officer with a Compass and a Map.