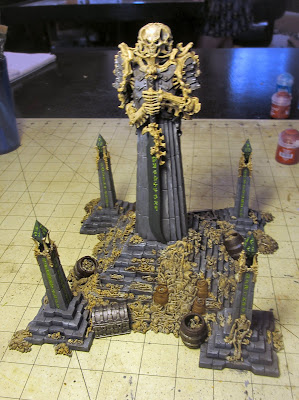 As most of us do, I have a mighty Pile of Shame. It is sub-divided into three sections: Primed, Built, and Still in Box. You know how it is, see something new and cool, must have it!

Then maybe build, hopefully prime if the weather/mood/Warp/primer is correct and stars in alignment...annnd new sexy project comes along before you get any paint on the boxed/built/primed stuff.

Then repeat. The Mountain of Shame grows!

It is a fine time to clean out my blacklog of models that have been primed, but have been sitting, for a long time. I started with one that hasn't waited that long, but is thematically linked to my AoS Skeleton Army and World Eaters, the cool and creepy Bone Tithe Nexus! It's got enough skulls to make Khone Himself give the S'up nod. 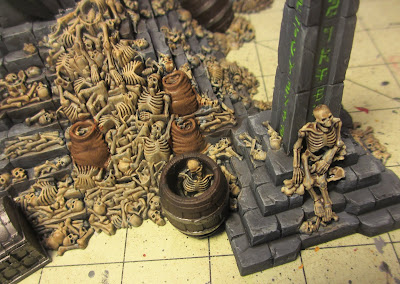 It took me far longer to figure out what colors I wanted to paint it than it took to actually paint. The body of the statue gave me the most problems. Is it all stone? Bone? I wound up doing a mix. 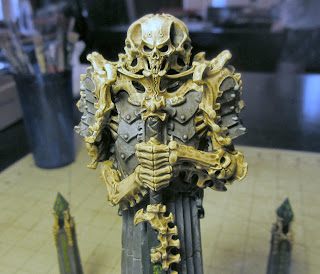 The wooden barrels take it a little out of the 40K aesthetic, but I think it will work just fine in the battlefields of the Grim Dark . 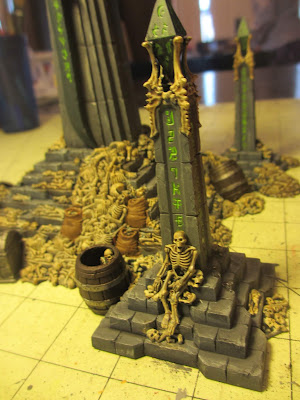 
Reduce The Pile
One Skull at a Time
Posted by Marcus the Blackheart at 1:12 PM 2 comments: 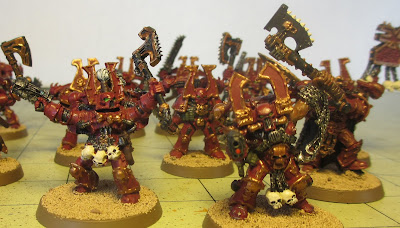 Blood for the Blood God. Yep. Those guys. I won my first Rogue Trader tournament with them (4th Edition), and made a Necron player almost cry. It was a good day indeed.

Way back in 1991 when I was getting serious about this new game, Warhammers Forty Thousand, I picked up a few metal miniatures 'cause they were cool. One of the blister packs was this guy: 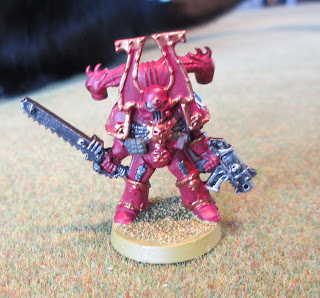 I didn't know anything about him, but he looked cool and evil. I was on the path to being a Khorne warlord I and didn't even know it yet. I found a few more (3 out of the 4) different poses that were available at the time, and wanted more. Then with the launch of Glorious 2nd Edition the floodgates opened and a few more Bunny Eared Psychos were released. I kinda wish I still had some of the first, mono-pose plastic dudes from 1994...

I bought a couple of boxes, plus my expanding range of metal guys, and my first real World Eaters army took to the field. No pictures exist of that epoch. 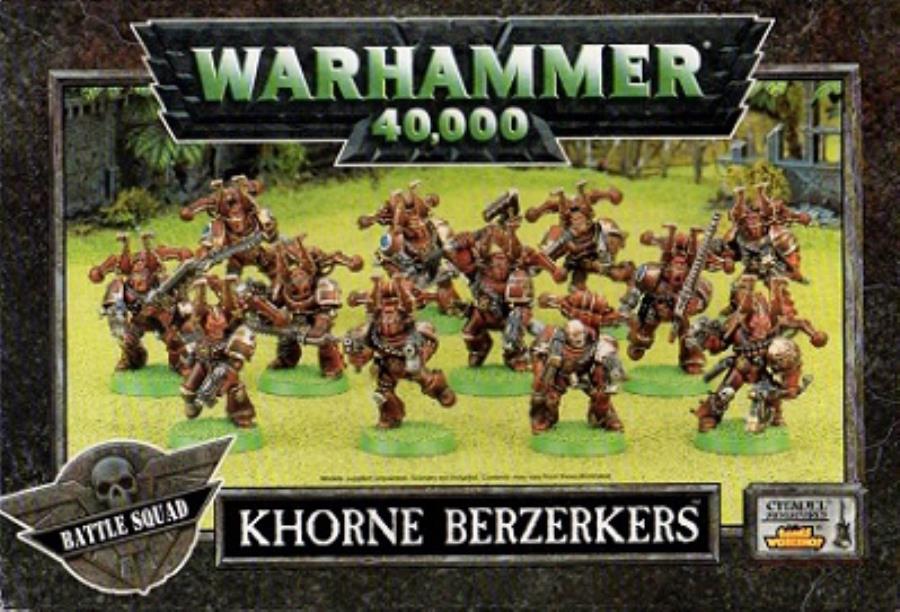 After Third Edition, and The Greatest Chaos Codex, the new multi-pose plastic Berzerkers made my World Eaters army really flourish. I then added tanks, bikers, daemons, and of course, Kharn. All trembled and worried about keeping their heads when the World Eaters took the field.

The years rolled on by and not much was added to the army, with one large exception... 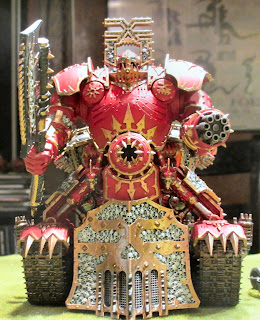 After a few years of not seeing them on the field, it struck me, I missed my World Eaters. Continuing my re-doing of some armies for 8th, I got busy on my favorite decapitation enthusiasts.

They got reshuffled into 10 man squads, and the laborious task of putting them all on 32mm bases was done.

Two of the not-quite-as-old metal figs got new jobs. The "Chaos Lord with Big Axe" became Master of Executions, and "Very Excited Berzerker" became an Exalted Champion. The fun part of that was cutting off them off the old bases and putting on 40mm bases. I was concerned the most about old metal Kharn, but it went well. 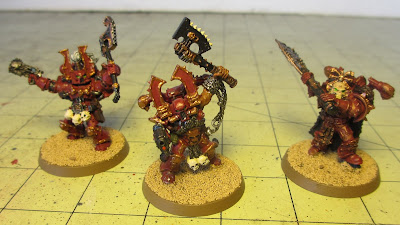 I still need to finish up the bases with some skulls, plant tufts, and skulls.

Skulls For the Skull Throne
We Have a Quota to Fill


Posted by Marcus the Blackheart at 12:36 PM No comments: