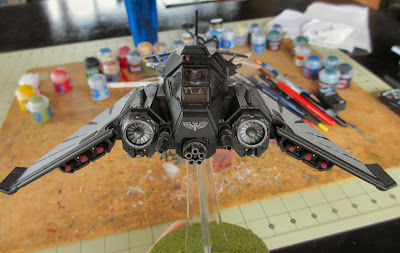 Carnage Asada 2016 is almost upon us. By popular demand, the Top Gun Tournament of Champions is back! This year's mission is to destroy an Ork convoy before it can escape off the far (12') end of the tables. There will be lots of Ork anti-aircraft and targets of opportunity to distract the fighter heroes.

My flyer range has expanded a bit since our last outing. I have added a Heldrake, and a trio of Tyranid mini-Rodans, but no Marine Flyers. I decided to (finally) assemble and paint a Nephilim Fighter for my Dark Angels.

It is a nice kit, no-fuss assembly. I do like its blunt, semi- A-10 Warthog feel. The Ravenwing paint scheme makes for some fast painting. 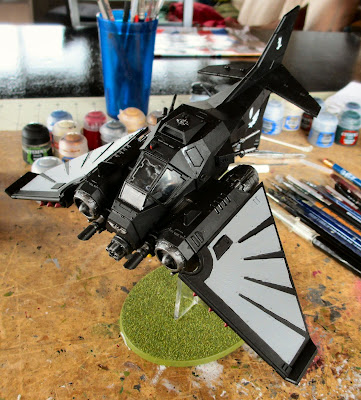 Good armor, lots of weapons. I'll see how it performs on Monday, raining death upon the Ork hordes.


The Emperor Protects
But Always Bet on Black
Posted by Marcus the Blackheart at 1:40 PM No comments: 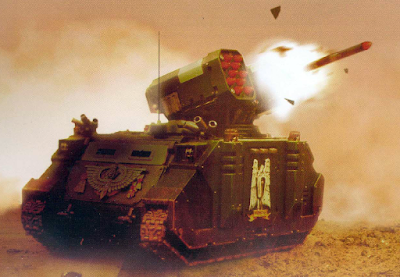 Waaay back in the early 1990's my Whirlwinds were the backbone of my army for both 40K and Space Marine (Epic). Of course the Marines didn't have a lot to choose from. But that was what made them good. Five different tanks tailored for different roles, all working together.

The Whirlwind was the long range bombardment, sure, but it had a decent anti-tank role as well. There were no rules for aircraft yet, but in the fluff it was said a few times the Whirlwind was the also the Space Marines anti-aircraft platform, which makes perfect sense. Space Marines have some of the best tech of the Imperium, so a AFV that packed multi-purpose missiles fits them perfectly. 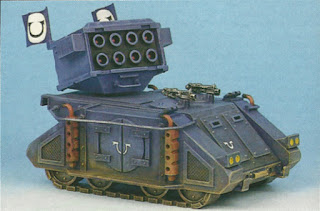 I had made a pair of Whirlwinds as shown in White Dwarf #117 using left-over Rhino parts and bases. They rocked. 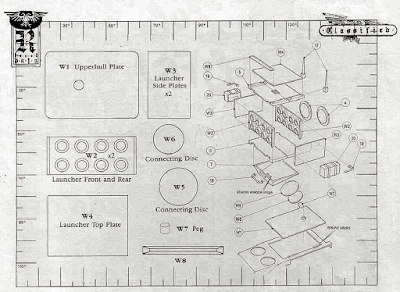 Then came 2nd edition, and the fancy new metal turret, but weaker rules. 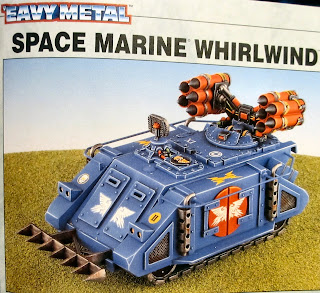 A myriad of newer Space Marine vehicles arrived and the mighty Whirlwind begun its decades long slide into near-uselessness. Forge World brought forth a dedicated anti-aircraft version, The  Hyperios, but it still lacked the utility of the original Whirlwind. The new Hunter/Stalker is a good AA platform but: A)is still only just a AA tank, and B) not for the Blood Angels, Space Wolves, and (most importantly for me), the Dark Angels.

So what to do? House Rule time.

The Space Marines clearly have the tech for a missile launcher that has different ammo types. The basic Infantry Missile Launcher, and the Typhoon Missile launcher do this well. So should the Whirlwind, just bigger and better. Here in my simple proposal:

The Whirlwind is armed with a Vengeance Missile Launcher. Like the Typhoon launcher, it can be fired one of several different ways each turn.

May add one addition missile type:

I think this goes a long way to making the Whirlwind a viable weapon again. It is not as good as any dedicated platform like the Basilisk or Hunter, but it can do it all, and that is what the Marines need.


The Emperor Protects
And Rains Death Upon the Heritics


Well. That is a hell of a thing. Now we just have to wait a few months to see any real gameplay shots. Still, I am very excited, here's hoping it has bigger scale battles than Dawn of War II.
Posted by Marcus the Blackheart at 10:01 AM 1 comment: