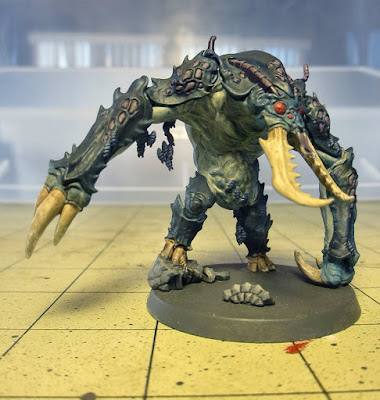 Finally the Ambull returns to the Grimdark. A whole lot bigger than the two-part lead figure from aeons past. Deadly on the table and poisonous in real life! 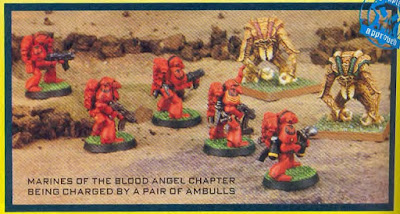 The new figure is easy to assemble and fun to paint, once you settle on the color scheme. That is always the toughest part for me, keep to the box art or do something else? I have seen some fantastic paint jobs across a range of color combinations. In the end, I did a slight variant of the box model.

It earns its "Dreaded" moniker, as it is a terror in combat in Blackstone Fortress. The missions it (and the pair of Borewyrms) come with are well done, and a good addition to Blackstone.

I hope it gets sold separately with rules for it in Kill Team! Maybe as a kind of wandering monster, or if you have a few, some kind of monster hunt? 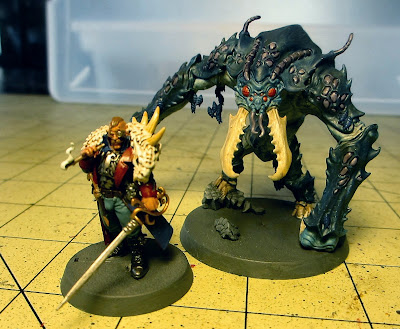 Go Roll Some Dice
And Always Look Behind You

Posted by Marcus the Blackheart at 12:08 PM No comments: 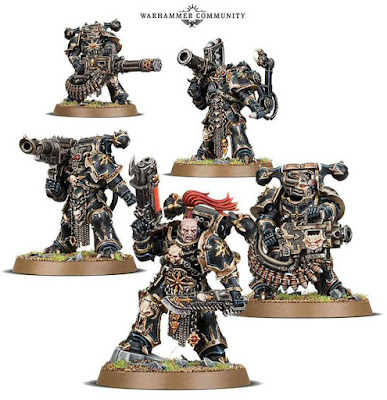 I don't normally cover rumors, but...some pics have bubbled up from the web that give me some questions. It looks like a new CSM Havoc squad, including the awesome marine with the rotary cannon-gatling gun that was teased last week. Cool! Also pictures of the sprues. 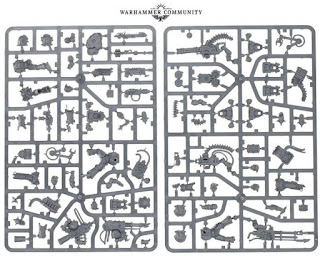 What does it mean? The sprue with three Hv Weapons only has one body. The sprue with two Heavy Weapons and the Champion bits has two bodies. This does not make sense to me.

Will the Havoc box set only have three guys and a ton of weapons to customize your other squads?
Is there another sprue we haven't seen? (Most likely)
Or is there not a Havoc box set at all, and this is from the Chaos Marines box? Some kind of super set that has all the options for a Marine or Havoc Squad? This seems unlikely, as the Heavy Bolter is different from the pics of the CSM squad.

I suppose we will find out tomorrow.


Nothing To See Here
Unless its Old Man Jenkins!

Posted by Marcus the Blackheart at 1:47 PM 3 comments: 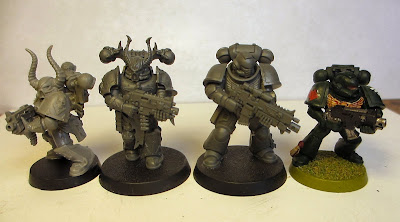 I just got my hands on the new Shadowspear box set. I think it is excellent. I like the Vanguard Marines fluff and models, so it works for me. Of course the big elephant in the box is the new Chaos Marines. I hastley slapped one together and formed a line-up.

Taller and broader than the old plastic Chaos Marine, and just a smidge smaller than the Primaris Marines.

In case you were wondering as I was, the new CSM are the same size as the two from Blackstone Fortress. I thought as much, but it is good to verify.

Scale creep has always been an issue for all long term lines of miniatures. Some of the early Battletech and AD&D figs are hilarious in comparison to ones released just a few years later.

It's an issue with no easy answers, and a completely personal choice for the collector. Do you just add in the new figs and don't really care about some size differences? Rebase and modify a bit to reduce the differences? Ditch the old stuff or just not get any of the new?

I did sell off all of my old metal Death Guard in favor of the new plastics. There was just no comparison for me in terms of size and quality of the new sculpts.

My Black Legion has been on my to-do list for this year. Now, I have to make my choice. I'm going to wait to see all the new CSM releases before I fully decide.

I can't wait to put the new Abbadon next to the old one...

Go Make Something
Just Make It Work For You