The side that makes the fewest mistakes wins. This is a military axiom that has been handed down for many generations. I was taught that in the late '80s and found it applied to most aspects of life.
Especially wargaming. Crushing your enemies on the tabletop is one of life's little joys. Victory through a great plan and/or taking advantage of a developing situation is rewarding. Crazy good dice rolls just when you need then? Yeah, I like that a lot. Your opponent forgets to activate a unit? This happens on the real battlefield, so I am okay with my miniatures having comms problems as well.
But this is a game, not the real battlefield. At what point is winning no fun?
Like all things, it depends on who you are and what you want. I play games to have fun and socialize. Two things that become more uncommon as stupid adult responsibilities mount. These days I am more interested in playing the game and having a good time than winning. Don't get me wrong, I still have an aggressive nature and like to win. If you have made a tactical error on the field I will make you pay for it. But what if you forgot to deploy a unit or two? What if she forgot the a Bright Lance can hurt a Land Raider?
On the flip side of  bloodlust is the want for your opponent to play the best game they can and have a good time.

I used to go to a lot of 40K tournaments. Rogue Traders, Leagues, and the Grand Tournaments when they where still held in L.A. I won some, (RT and League, not the GT) and had loads of fun for a while. A few years ago things seemed to change. A group of players began to emerge, ones who did not care if the people they played against had the slightest bit of enjoyment. They just wanted to win. They would "play" the game without the fun that usually goes along with playing with toy soldiers. One morning I woke before a RT and realized I didn't want to go. I didn't want to fight over rules, the gameplay based on Codex tricks and cheats. And my favorite, the temper tantrum or sullen pouting when they realized they were going to lose. I have not been to a tournament in six years. I have stopped by and watched for a bit, but it still seems to be only 25% of the players I would like to play a game with.

Which in a very rambling way leads us back to the way I play now. And the way all the people I play with do. We have a multitude of house rules, which in the near future I will inscribe on this very blog. The most important rule is oddly Games Workshop's old rule: Have fun. We allow forgiveness on a whole host of common mistakes, as long as your turn is not over yet. I think the coolest thing we tend to do is talk with our opponents about what to do on a turn. Let's look at an example shall we?

Matt had brought along the Tyranids and I the Guard. We were playing the First Encounter mission out of the mission book. I had two great turns of shooting the hell out of Matt with my tanks. His forces were scattered and it look bad for Matt. Then on turn three he got both his Trygons from reserve. He rolled well for which table sections they came in on. The sections with my tanks.

He was going to deep strike them on the table close to my tanks, but still endure a turn of massed firepower before he could assault. I helpfully suggested he just move them on normally and fleet towards the hated Leman Russes. Tragically for me he took my advice assaulted and killed three tanks.
Did my advice make for a better game overall? Yes it did. I got the firepower base ripped out of my army in one fell swoop. Matt's army would have been finished off if my tanks were not stopped that turn. The last two turns were very closely fought. Yes I lost, but it was a good game that hinged on one moment and was much more enjoyable then the Guard just shooting up the scattered 'Nids for a easy-ish win.

Is there a point here somewhere? I hope so. There is a fine line between showing mercy for a rules/codex issue and tactical errors. I always want to play against my opponents "A" game. If I can help them find it, so much the better. 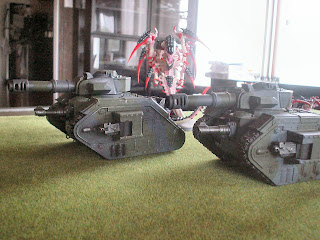 Posted by Marcus the Blackheart at 1:40 PM 2 comments: