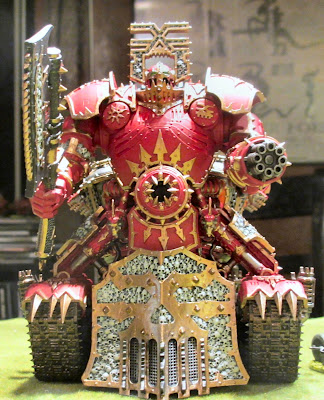 We interrupt Gargant History Month to bring this special bulletin: Due to Famous Author Pete having real world things to do in order for his publisher to give him money, I present Plan B!

The overly enthusiastic forces of Khorne have found a relic they would like to have, and maybe use to summon a daemonic horde into realspace. An Eldar Farseer who just can't keep out of other people's business, summons her warhost and tips off some nearby Space Wolves and Blood Angels to stop the Khornate mission.
Fun and violence will no doubt ensue.

The Gargant project will continue in a bit, including the datasheet and an Apocalypse battle.
Next week will be the Carnage Asada battle report.


Some Heads are Going to Roll
And a lot of tasty cow shall be consumed!

An Arsenal of Doom 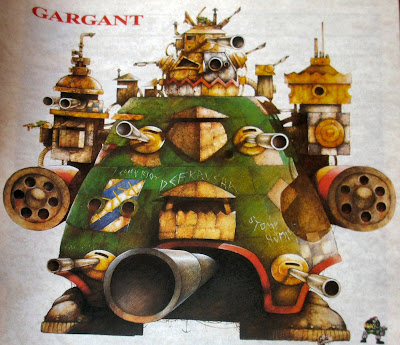 Orks love the dakka. The more the better. In our continuing exploration of the Ork Great Gargant in conjunction with In The Grim Cheapness of the Future (where you can see the beast taking shape) we shall cast our eye upon the very essence of the Ork reverence of the Gargant: raw firepower.

One can broadly characterize two levels of weapons on the Gargant. Let's examine each in some detail.

Primary
The "typical" Gargant has three main weapons, a massive belly cannon with a slow rate of fire and two weapon "arms". These can be any of a wide range of types. Here are the stats I have pieced together from all the sources I could find. Balanced out against other 40K weapons, but mostly my own best guess.

*Slow: Weapon can only fire every other turn.

Secondary
Two shoulder turrets are common to Great Garants, as is the Gaze of Mork. A few secondary weapons can be found in hull emplacements on some. Most smaller weapons can and are attached almost anywhere. 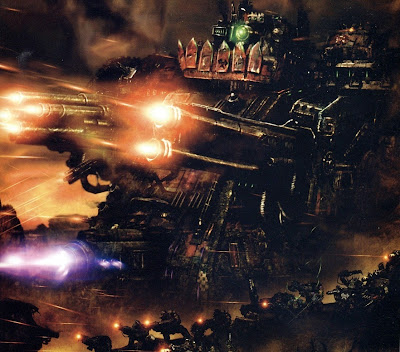 This entry will be updated a few times as I'm still fine tuning the weapons, feel free to leave any comments on the stats down below.
Next up: My Datasheet for the Great Gargant.


More, More, MOAR DAKKA!
Too much is still not enough
Posted by Marcus the Blackheart at 1:16 PM 6 comments: 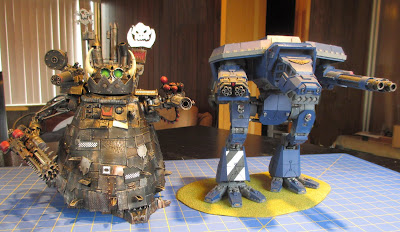 Thanks for joining us for part II of Gargant History Month. A collaboration with Pete's blog,  In the Grim Cheapness of the Future, wherein he is building a 40K sized Great Gargant.

How big would a Great gargant be in 40K? Let's have a look at the current state of walking Orky war machines. The plastic Stompa was released for 40K followed by a new plastic Deff Dread kit that is a bit bigger than the older metal one. Recently the Gorkanaut (or Morkanaut) was unleashed, a brand new walker, about the mass of a Land Raider. This sound familiar? 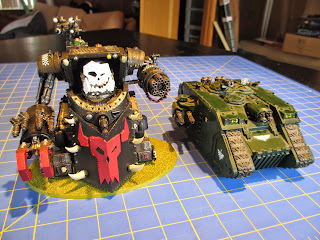 Yuuup. The Gorkanaut is about the size the Epic scale Stompa was in relation to ye olde Land Raider. 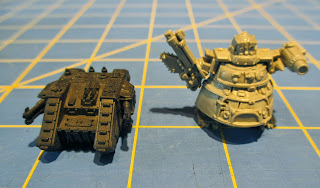 So what does that really make the 40K Stompa? A Gargant? Mostly, yes. It's not like the Orks have a hard and fast rule about specific nomenclature of the classification of war machines. Dreads get bigger until some ladz just start calling 'em Gargants. Fine. How does this help figure out how big the Great Gargant should be? I'm glad I asked me that. To the comparison pictures! 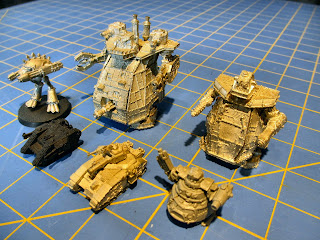 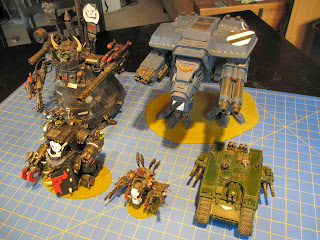 Scale is a funny thing in a fictional universe. Even funnier in a miniatures game, where looks trump accuracy every time, not to mention manufacturing needs. So we are after the right "feel" for a Great Gargant next to its contemporaries on the battlefield.

The Warhound is about 10" tall (more if it had better posture). Forge World's Reaver Titan is 16". I would put a Great Gargant's head around the 20" tall mark, anywhere between 18"-24" really. There are homemade Gargants well over three feet tall. I'm not sure the Mega-Gargant would be that tall. Imperial and Eldar Titans are tall and lean, Ork engines have lots of solid bulk to them, so a 20"-24" tall Gargant will be a massive presence on the field, as it should be, but not so large that it doesn't "feel" right. As long as it is bigger than a Reaver, and comparable to a Warlord it will be fine.

Next week: GUNZ, GUNZ, and other shooty bitz.

Posted by Marcus the Blackheart at 7:58 PM 2 comments:

A Brief History of Gargants 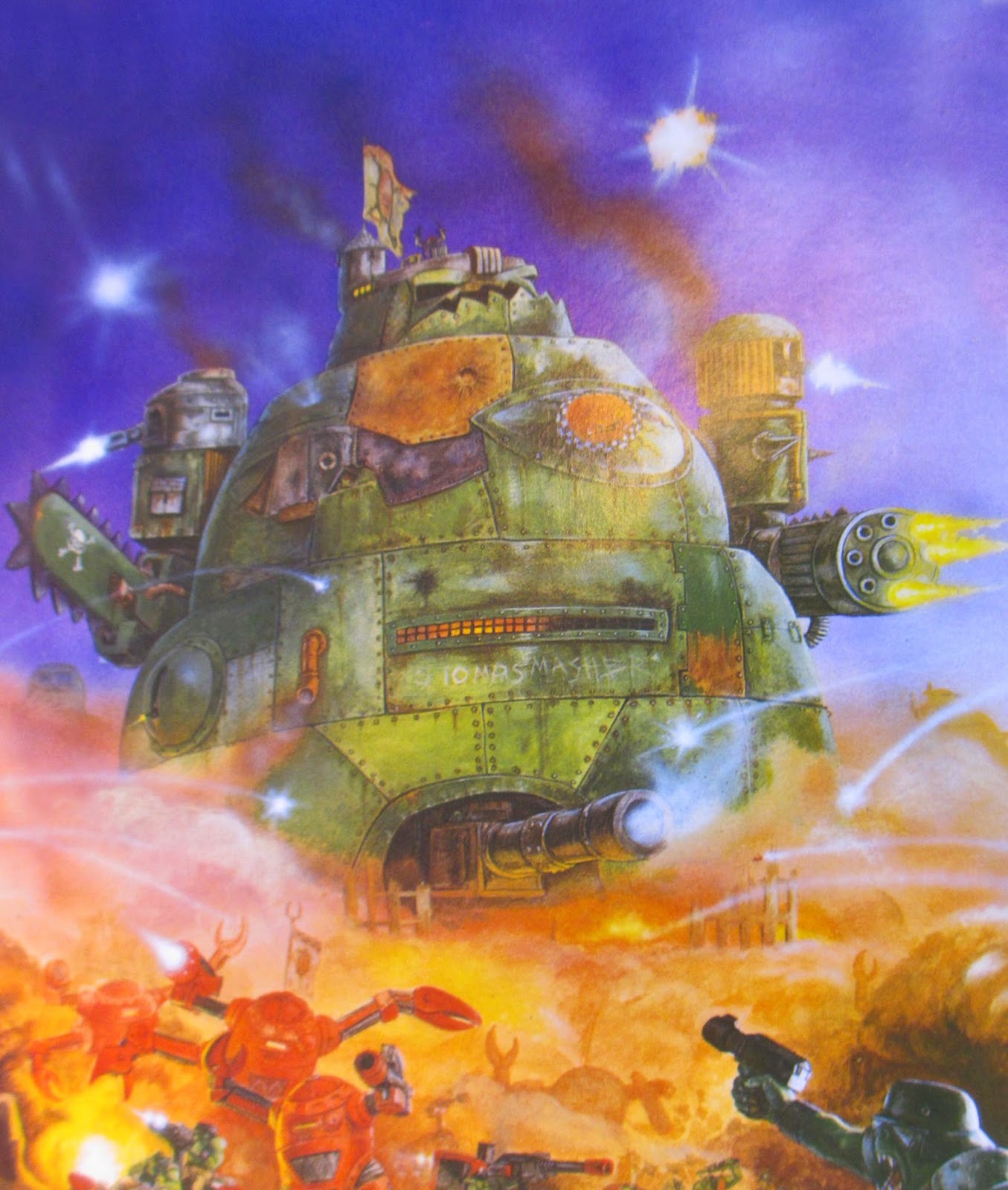 Welcome to a crossover project between myself and fellow Warlord, Pete over at In The Grim Cheapness of the Future. He is going to papercraft a Ork Gargant to be used at our annual BBQ/Booze/40K Kill-fest, Carnage Asada!
I'm just going to ramble about about the Ork war machines and come up with some rules. This week: real world releases.

Epic Scale
Of course it all began with Adeptus Titanicus. That glorious game of giant robot war machine combat set during the Horus Heresy. Soon after its release in '88 a sister game, Space Marine came out and added tanks and infantry of the Traitor and Loyalist Space Marine Legions. A few months later, Codex Titanicus hit the streets and brought the Epic system into the Post-Heresy era. Rules for Imperial Guard, Eldar, and Orks. The masses rejoiced. 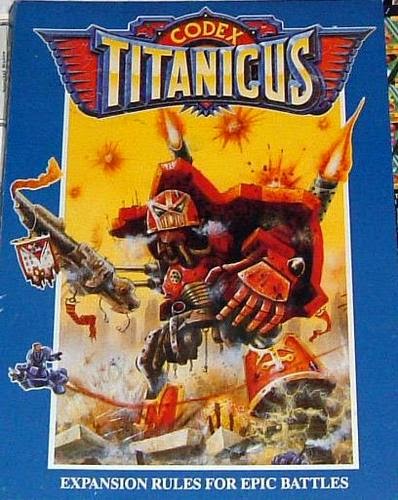 White Dwarf 114 had the first ever image of a Ork Titan, not yet named Gargant. 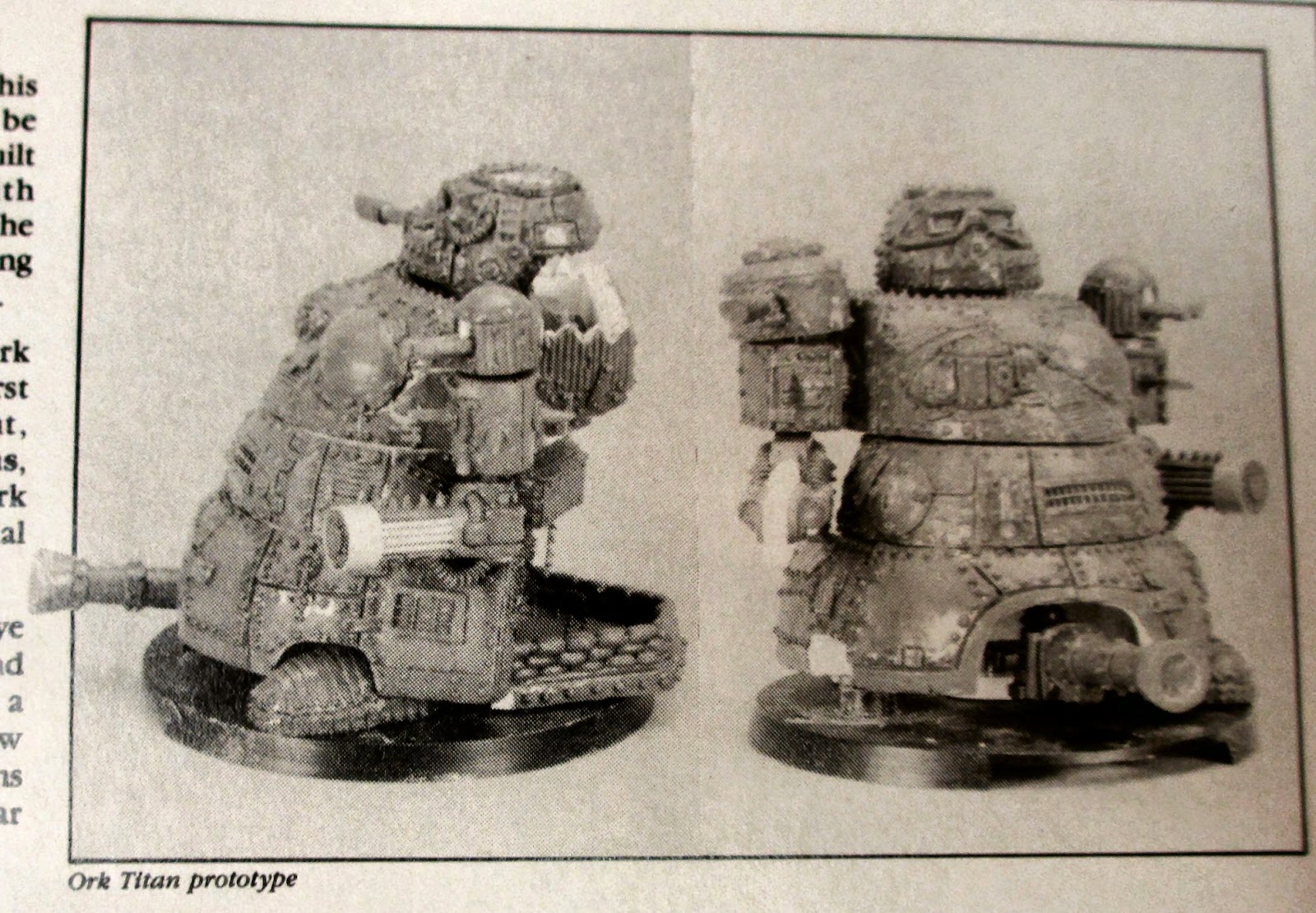 Two months later in issue #116 the Ork Gargants had full rules and supporting units. The Gargant came in two main variants: The Smasher, armed with a huge "Gut Buster" cannon and the seldom seen Crusher, which had a enormous set of metal jaws called the "Snapper". 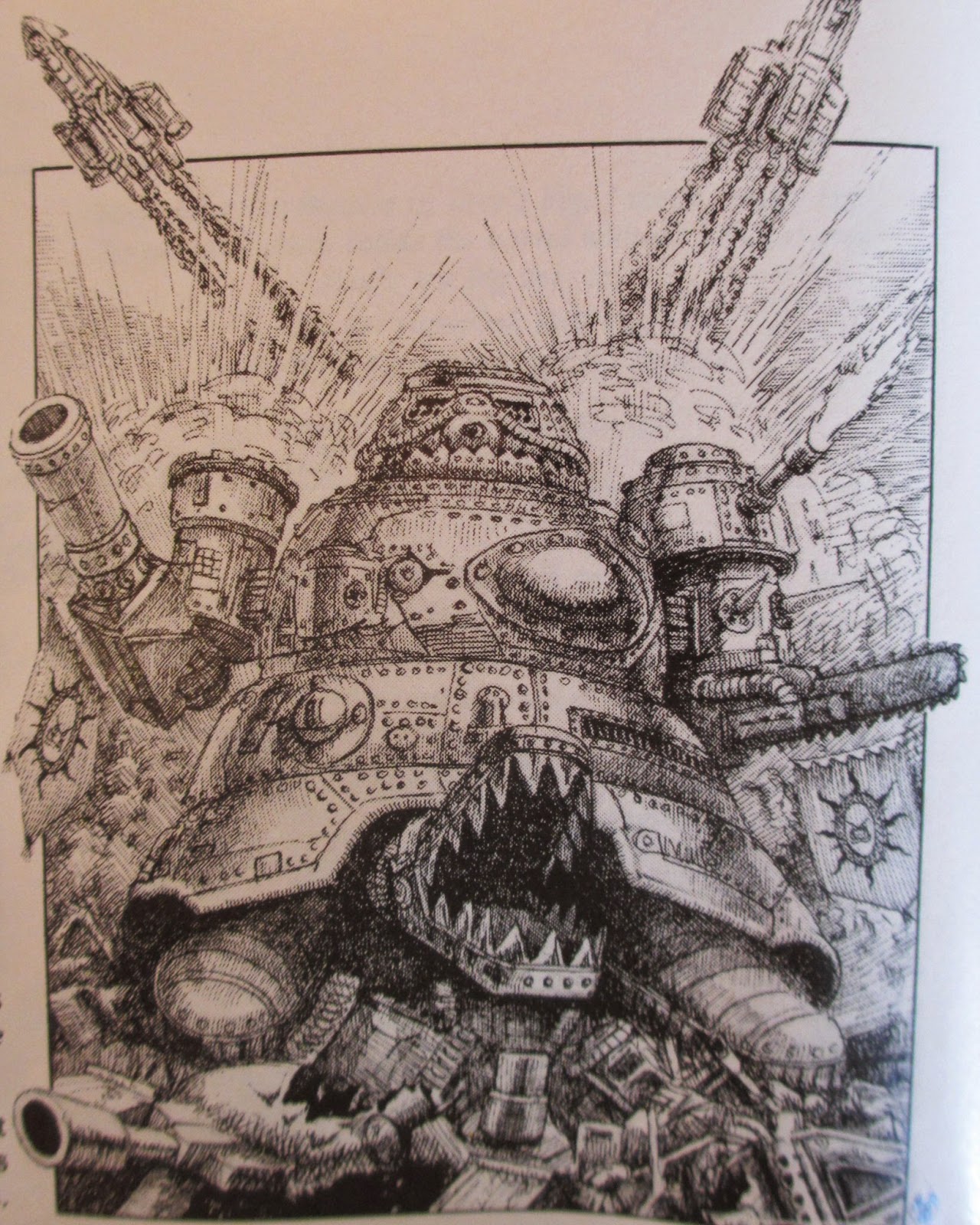 Just before Space Marine 2nd Edition came out, the Gargant line was expanded to include the Slasher, which was a smaller Gargant, and the Stompa, not much bigger than a Land Raider back then. 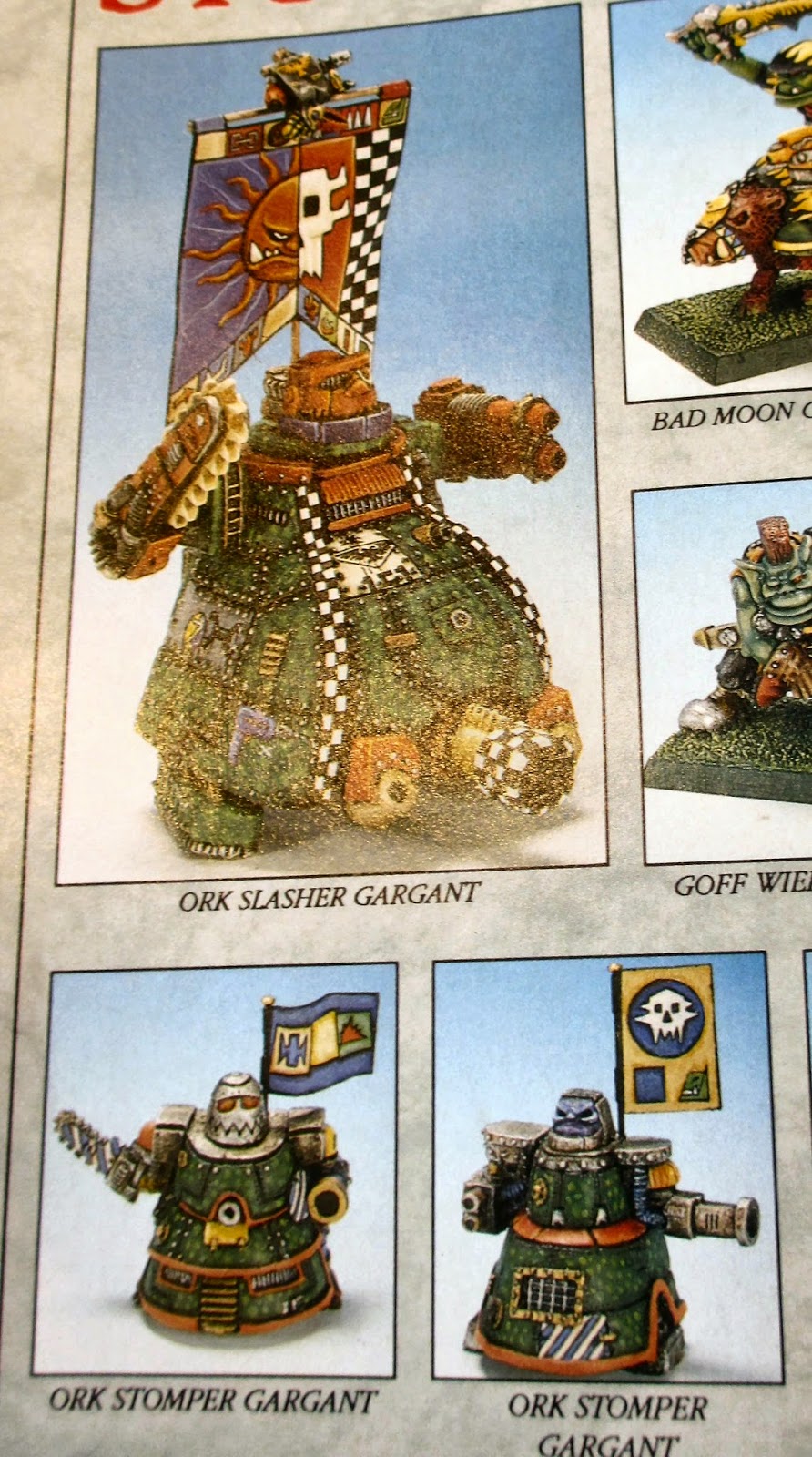 The Snapper Gargant faded into the mists of legend, while the Crusher became the Great Gargant.
Space Marine had a good long run with many supplements. The last major expansion for it was a big box sex, Titan Legions, which included a pair of plastic Mega-Gargants. 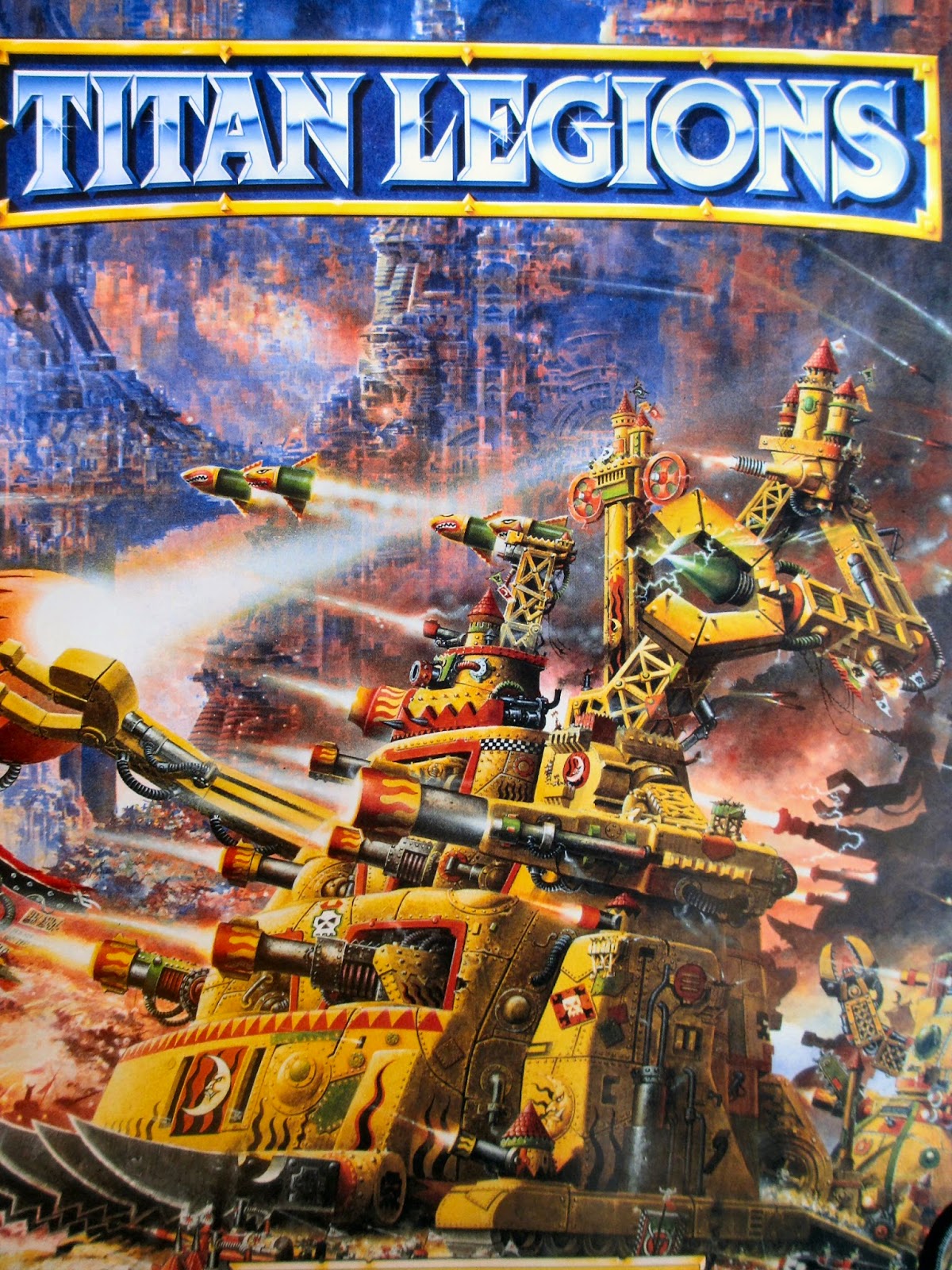 The Epic Space Marine system would slumber for a few years until Epic 40,000 hit the scene in 1997. The Great Gargant, and (no longer Slasher) Gargant got more angular remakes, still in metal. 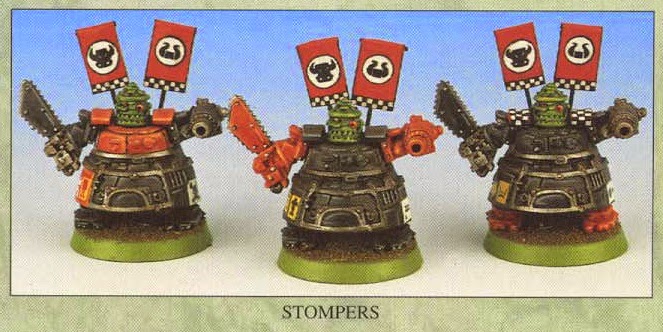 The Stompa was done in plastic, and still about Land Raider sized, taller of course. Epic 40,000 didn't go over well with the fans and bit the dust six months later, so did any further plans for any new Gargants.

Epic Armageddon rose from the ashes in 2003 and was well received but not well supported by GW. The Orks got a few new metal Stompa variants but that was all for the Gargant line.

40K Scale
In the early Nineties, Game Workshop licensed a few companies to make 40K size resin models from the Epic scale vehicles. A sign of things to come. Epicast made a pair of Stompas, still much smaller than the current GW plastic one. 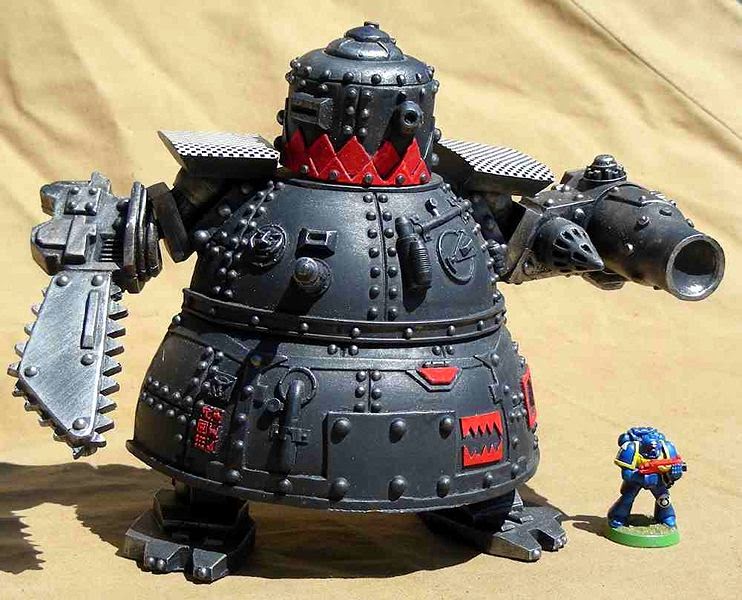 And of course, Armorcast made the massive Great Gargant. 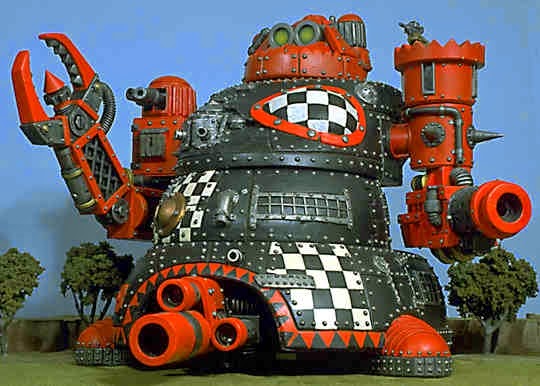 Both had very short production runs, and were the last 40K scale Gargants until GW's plastic Stompa in 2009. Next time we will talk about the current state of Ork Gargant/Stompa/Dredz and scale.

Posted by Marcus the Blackheart at 3:00 PM 3 comments: