Tomb Lord Pete and I had a 2,000 point battle. It was his first go with the new Necron Codex, and I am still on my (newly-painted) Tau kick. It was a great clash of firepower.


The Tau had an outstanding first round of shooting and put down a Annihilation Barge and a squad of warriors. Both sides cautiously moved toward each other and the objectives while madly blasting away.


The Tau got the edge early and didn't let it go. The Necron numbers dwindled away under a hail of Tau firepower. Both commanders still managed to meet by one of the objectives for a showdown.
Commander Farsight took down the Necron Overlord in a close fight on the last turn. A well fought battle, the dice favored the Tau on this day. I am looking forward to a rematch.

In honor of the Thanksgiving, November will be all about Khorne!


The Emperor Protects
Just not Xenos


Like one or two of you out there, I had an army escape the painting table for a bit. Eleven years in my case. I  was into the Tau when they came onto the scene in 2001, but that was a hell of year for me and they got built, but not even primed. Oh, I had a grand three-tone desert tan, rust, and dark green pattern in mind for them, just never the time. "Overtaken by events" is a phrase we used in the Air Force, and that is exactly what happened here. They got fair bit of time on the field of battle, then less, and  less. Fast forward to 2006. A new Codex and few new models and my Tau army is dug out and expands. A friend of mine decided he couldn't give his Tau army any love and donated it to me in the faint hope I would someday put paint on it. Heh. I put them on my paint schedule for early 2007. Then life steps in. We buy a fixer house, move, work gets crazy, then new Orks, Tyranids, and Guard. I don't even unpack the Tau until 2010. 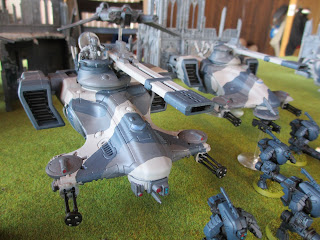 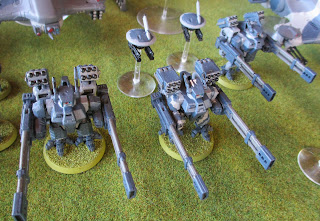 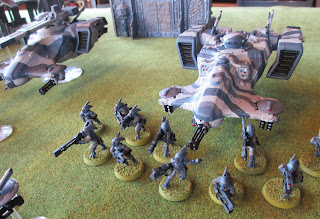 Then we started the Non-Human League. Matt decided he would give my Tau some use. The thing I love about Leagues, Apocalypse battles, and other special events is the drive I get to finish things. I was resolved to paint the long suffering Tau at last.
I had hoped to get them done in before the League was done, but once again I was thwarted by life. I had a fair part of a finger ripped off, so it was a bit before I could paint again.
And paint I did. In just about six weeks I got through my entire army, just under 4000 points worth. To celebrate the occasion I bought a pair of Forgeworld Remora Drones. I did go with a very different paint scheme, but I am very pleased with it. The army fits very nicely on two Force Organisation Charts, so now it is time for a 4K battle. 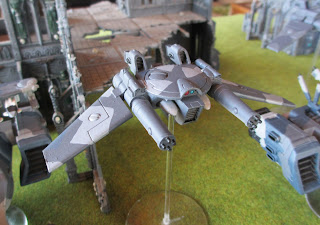 Posted by Marcus the Blackheart at 12:25 AM 2 comments: