All Over the Bench 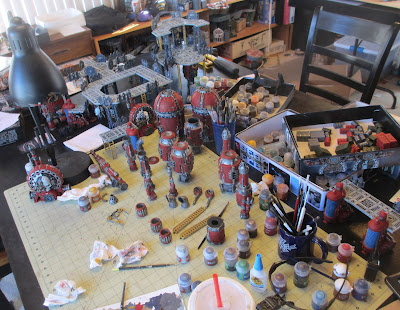 My last two painting projects were Kill Teams. Small number of figures, small footprint on our dining/gaming table. Easy to move aside to game and/or eat.

I have a good amount of Sector Mechanicus terrain, mostly kinda assembled. Some parts even had a bit of paint them. I wanted to make some really dynamic industrial battlefields for 40K/Kill Team, so I picked a few more terrain sets that would fit in with the theme.

Then I decided to paint ALL MY TERRAIN AT ONCE. A bold move to be sure, but not a very well thought out one. I wanted my Sector Mechanicus to be glued together but still modular, and yet in small enough sections I could actually store in bins (to keep dust and cat paws off of it).

A week of test fitting, guling, stacking, cursing, and just staring at it, finally gave me what I wanted.

Then it was time to paint. Oh mighty Emperor, I gravely underestimated how long it would take to paint all those big slabs of detailed plastic. Or how many times I would have to run to the game store for more paint.

Big projects can get out of control fast. By breaking it down to its component parts I was able to tame this doom I brought upon the work bench. Paint all the red, do all the leadbelcher, (so, so much leadbelcher), in a assembly line fashion. I know that doesn't work for everyone, but it does for me. 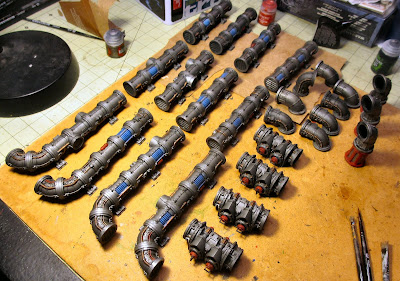 The terrain is so detailed, I could have gone way down the rabbit hole with this one, but I did a lot with drybushing and washes, and picking out just select detail to give a little pop. 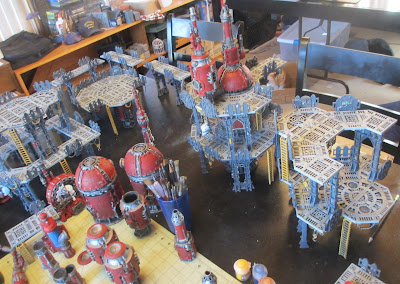 So after two weeks I declared it done enough. I could easily spend a lot more time detailing but I actually want to play something. After a few games I'm sure I will notice somethings that bug me and I'll go back and touch some stuff up. But tonight the table will be clear!

Until I start on the Sector Imperialis stuff...


Go Make Something
But Leave Room To Eat

Posted by Marcus the Blackheart at 10:22 AM No comments: