Sorry about the lack of posts this month, it's been a bit busy/crazy. Enough with real life, toy soldier time! Once a month we have been playing FFG's Star Wars Imperial Assault Campaign. A few missions each session, and we wrapped it up last weekend. Including the side and forced missions, we did twelve missions, and each one was tense and could have gone either way. It is evident that FFG put in some real work playtesting and balancing the missions.

The Rebel scum did win the Campaign, but I had a lot of fun playing the Imperials. The Rebels do become powerful killing machines as they increase in XP and get good gear, however, the Imperial side gets its toys as well.  This is where some people are divided on this game.

I feel the Skirmish mode is the place for head-to-head combat, where you try to crush your opponent, not the Campaign. The Campaign is more like a lite RPG to me, and as such it is more important to advance the story and give the players a good fight. This doesn't mean I take it easy on them. Far from it, just ask them. It does mean I am more thoughtful in my decisions and how they relate to what the Imperials are trying to do, and how they should act. I tend to be much more thematic in my troop choices as well. I feel it makes for a better experience for everybody.
There are plenty of missions we have yet to play, and the Twin Suns expansion just came out so there is much more Imperial Assault in our future.

Next up: The Gargant is getting closer.


Go Roll Some Dice
Time to Upgrade some Stormtroopers
Posted by Marcus the Blackheart at 6:46 PM 2 comments:

Knights vs. Kaiju, Round One 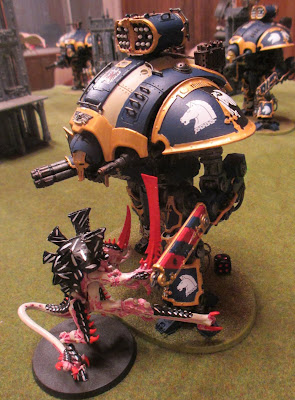 1750 points, Tyranid Kaiju list vs. my Baronial Lance. Sadly, it all went wrong for the 'Nids.
The heavy firepower of the Knights is to be expected, but one would think once the surviving Tyranids got into hand to hand they would do some good damage. Not even close. It was a disappointing battle for both sides.

This battle did point out just how much the Tyranids have lost in anti-tank capabilities. Just the one (huge) change to monstrous creatures losing the extra D6 on the penetration roll is crippling. But add the lessening of Rend, and the complete lack of high AP weapons and there is really not much of a chance for the Tyranids to beat The Knights, or any army that has a few AV.13 or better walkers or tanks. 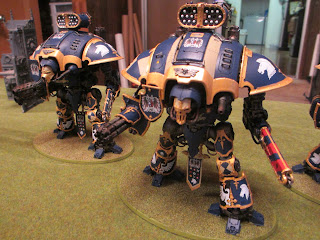 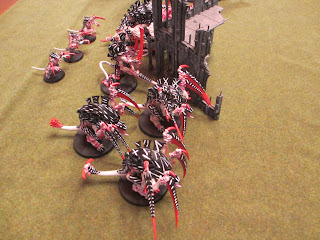 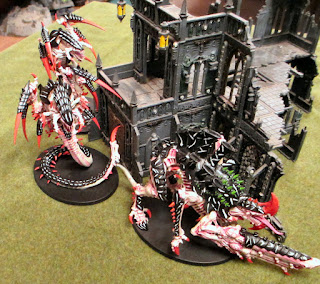 More Tyranids need to be able to take some kind of Armourbane. Tygons, Tyrannofex, and the Hive Tyrant have to be able to beat up a Land Raider, or a Knight in Hand to Claw/Tentacle combat. We are going to try a house rule or two and see how that goes. I just want the monstrous creatures to be monsters again. 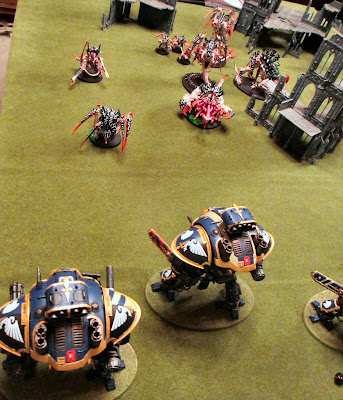 The Emperor Protects
Sometimes by Editing His Foes
Posted by Marcus the Blackheart at 4:12 PM 2 comments: