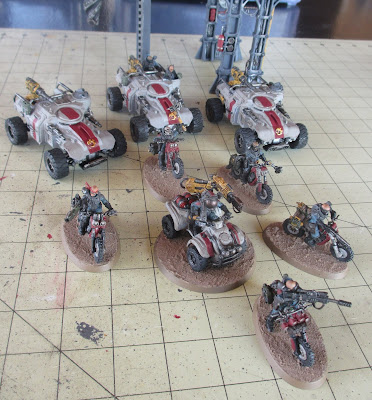 To wrap up Cult pledge week I have the new mobile cultists on the go. Bikers and buggies, oh yeah. 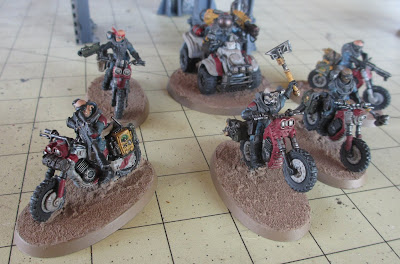 As I had mentioned previously, the bikers were a bit fiddly to assemble. Mostly due to small sized parts. This does give them a nice finished look, more like real people on BMX bikes, instead of the chunky Space Marine bikes. The kit has a wide range of options for heads and weapons. 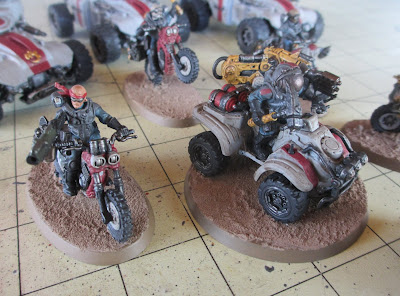 The quad bike is a fun little vehicle. I would have liked them to be a separate unit of 1-3 quads, but oh well. They work fine within the bike squad. 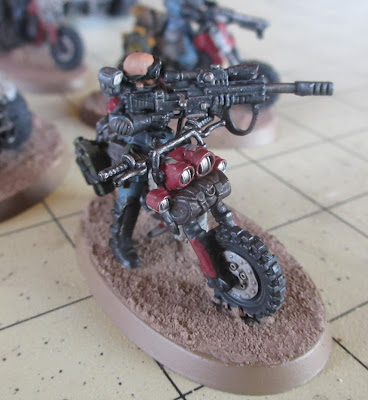 The Jackal Alphus is a HQ choice and a fantastic sniper. Why just hide and snipe when you can go fast? It's like a Cult Olympic event. 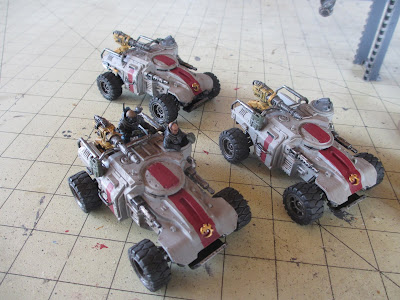 Finally we have the Ridgerunners. Fast with a serious amount of shooty. They come with a 120mm oval base, but I felt it was too big for them, so I opted not to put the Ridgerunners on their bases.

The Genestealer Cult has evolved into a truly dynamic army, both in look and play style. I really enjoyed building and painted them. They are one of those armies that is just a lot of fun to play with, win or lose. Now it is time for them to rise up and cast off Imperial rule.

Overthrow the Oppressors!
And get Eaten by your Gods as a Reward?

Posted by Marcus the Blackheart at 11:00 AM No comments: 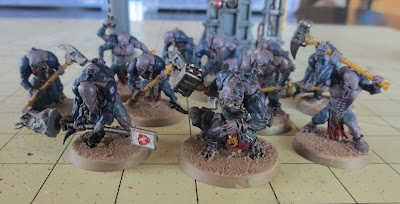 In the Cult's expansion, I added a couple of squads of the guys that are not used for recruiting rallies or posters. The ones kept out of public view until it is time to rise up.

10 of the new Aberrants, and their leader, the fun to say Abominant. Great poses, and I love the Hypermorph (squad leader) using a road sign as a melee weapon.

I also added a small squad of Metamorphs. They were fun with a range of options. Since it was only five guys/gals/monsters, they all got the squid heads. because who doesn't love squid heads? 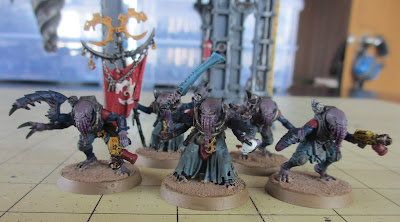 Yes, they all got hand flamers as well. For fiery fun/horror as they spring from ambush. 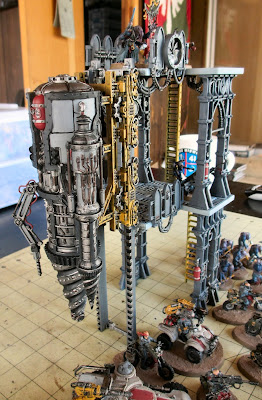 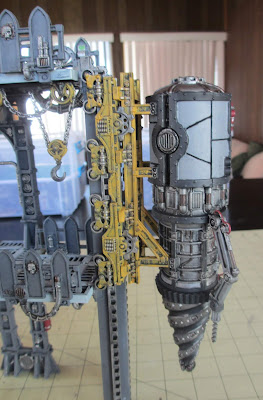 Nothing screams "Crazy Cult Doomsday Weapon" like a giant drilling machine. Tectonic Fragdrill also sounds cool. It is a nice scenery piece, and will be the objective of a few missions.

Posted by Marcus the Blackheart at 11:00 AM No comments: 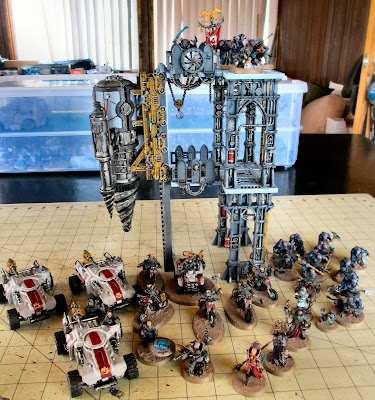 I'm not a fast painter. I bought the new Genestealer Cult stuff the day it was released, built all of it the following week, primed it all the next week and...waited a good long while to paint it. Then it took me a month to get them done. Painting is not easy for me (hand injury), but I think I have gotten a bit better over the years, so the reward of having a nice battlefield standard paint job on my army is worth it.

I wanted to show off the new additions to my now sizable Cult. Today it's characters (most of them). I'll just get this out of the way so I don't keep repeating myself. All of the models are really good. The sculpts are great, the fine details are impressive, and they all went together well. Okay, the bikers were really fiddly, and small, but still great. 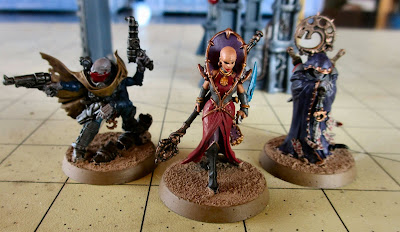 The Kellermorph is one of my favorites. Awesome pose, good fluff, and effective on the field. The new Magus is a great figure, she just oozes cult leader. I kind of wanted the Locus to be in an action pose, but I do enjoy the subtle menace of the more static design. 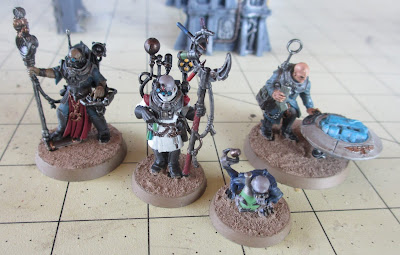 All three (four if you count the wee fella) of the support staff. I really like the hovering holo-table thing the Cult I.T. guy has. DJ Clamavus is a bit much, but fun. Dr. Happytime is a extremely detailed figure, with all manner of medical equipment on him. Mutagens for all my friends! 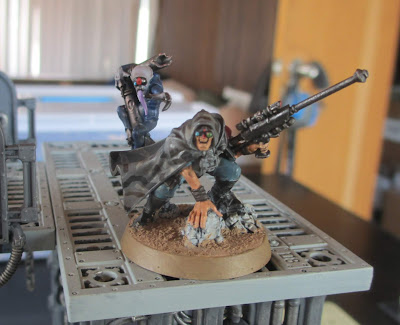 We end up with that one guy who always makes everyone else on the team uncomfortable, The Sanctus, the Cult's OTHER super sniper. Damn, they take hiding in the shadows and taking out high value targets very seriously. One of the odd weapon options in the Codex; Sniper Rifle OR a cool knife? Why the heck can't he take both? Is the knife like really super heavy? Don't they trust him to keep track of two things?

The Stars Call To You
Four Armed Hugs Await!

Posted by Marcus the Blackheart at 11:06 AM No comments: 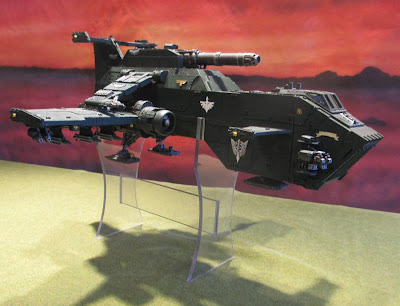 After five years, we have run out of Thunderhawk Flight stands. Everyone who purchased one was very happy with it, and we thank you!

We will make a very small run of stands in July, so if you are still interested in one, please email me at Atomicwarlord@gmail.com and you will be placed on the List.

Be advised the current stand only fits the older Thunderhawk. It will not fit the newer 2017 version.
If you do have a newer Thunderhawk and would like to assist us in designing a stand for it please let me know at the above email.

The Emperor Protects
With Lexan

Posted by Marcus the Blackheart at 10:00 AM No comments: