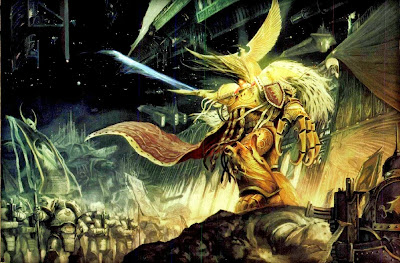 What do you get someone whose first name is "The"? Only undying loyalty and death to all heretics. And cake! Do not forget the cake.

We here at Atomic Warlords hope you enjoy this holy day of smiting all those who oppose us. We celebrated by hosting the 40K Top Gun Invitational Tournament. More on that tomorrow.

We also played Fantasy Flight's Relic. For five hours. Relic is a fun game, just oozing with 40K goodness but it is a bit of a grind at the start. Which is to be expected of any game based on Talisman, for which a six hour game would be very quick. The main drag on the game seems to be the very slow start, and the complete randomness of the threats. As you are struggling to level up, few things are as bad as drawing Typhus or a Hive Tyrant right at the beginning. We are going to try a game of Relic were all the players start with some wargear and level 5 to try and make it more of a race than a slow slog. I'll tell you how that goes. 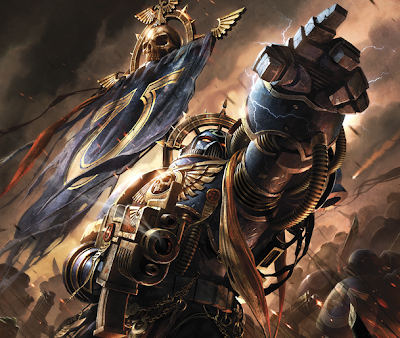 Well, it's big and it's here. The largest Codex to date (178 pages), the posterboys of 40K, the Adeptus Astartes have arrived for Sixth.
Good fluff on Ultramarines, White Scars, Imperial Fists, Crimson Fists, Black Templars, Salamanders, Raven Guard, Iron Hands, and some small bits on a large number of successors.

A fair bit of older artwork, with a lot of nice new stuff all in glorious color. All the things you expected, origins, organisation, markings, history, battles, plus a new galaxy map of the home worlds of 50+ chapters. All told, the first 75 pages are just pure fluff, and it is great.

A quick skim shows some nifty new wargear and the new units we were excpecting. A few changes stand out:
Vanguard Veterans no longer can charge on the turn they deep strike.
The Legion of the Damned get Flaming Projectiles (no cover saves).
The Land Speeder Storm is now a dedicated transport for scouts.
Anyone with a missile launcher can buy flakk missiles for it.

And in what I'm hoping is a omission that will be fixed, Command Squads can no longer take any special weapons. Yeah. What the feth? Cut & paste error or random change that makes no sense and goes against 20+ years of Space Marine history? They can all take combi-weapons, grav/plasma pistols, or storm bolters but not a humble flamer or trusty meltagun. We will see.

I am glad the Marines did not wind up with some "super-dreadnought" just so they could have a new big unit like everyone else has gotten so far. The two new units work well enough into a army already spoiled for choices. I would liked to have seen Predators and Whirlwinds be squads of 1-3 units.

Now it is time to build a few army lists and see how the new Warlord traits and Chapter Tactics work on the field.


The Emperor Protects
It helps if you are related

Posted by Marcus the Blackheart at 9:03 AM No comments: