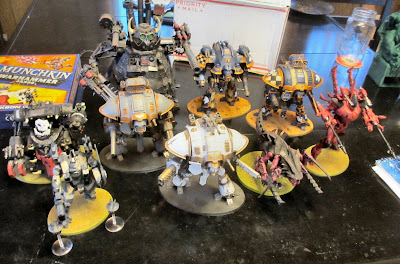 It was time for our annual Memorial Day BBQ & Kill-fest. This year we did Kill Team Knights free-for-all. Each player picked a single choice from the bullpen of Giant Robots & Monster, set up along the edge of the battlespace and had at it! 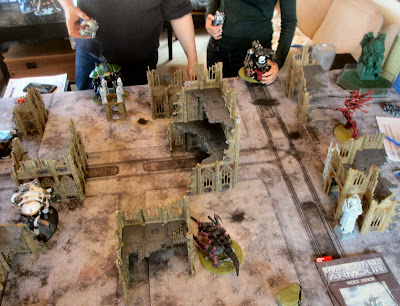 It made for quick playing and very shooty battles. Ideal for multiple players. Unless ALL the other players gang up on you just because you took the Barbed Hierodule and look scary.

Although this happened to the Ork Stompa as well... 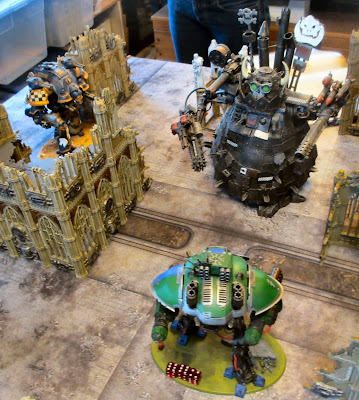 We also played Munchkin 40,000 and made some lovely Carne Asada BBQ. A fine time was had by all.


Everyone Wins
When Giant Robots Fight
Except the Tyranids, Apparently

Posted by Marcus the Blackheart at 11:54 PM No comments: 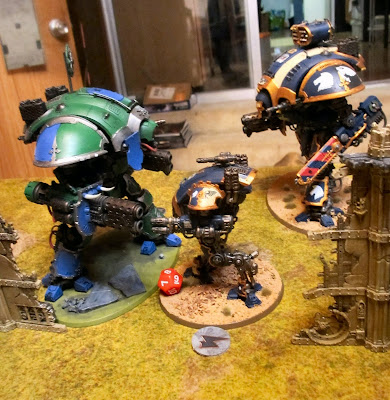 Playing a game of just Knights against each other in 40K is a great deal of fun.
Except when it isn't. Like when one side goes first and smokes half of your forces. Which is not that hard when you only brought four or five models.

Kill Team (and many other games) deals with this by alternating player turns. This is a game mechanic I think offers better results, and more enjoyable games. So like a olde tyme TV commercial about chocolate and peanut butter, lets see what happen when Knights are mixed with Kill team.

To be fair, this experiment is 40K with a Kill Team turn structure. So you still build your force, pick a Warlord plus traits, and use Stratagems, all from the Codex.

We picked a 100 PL list of Knights (I used 102...the Knights list isn't really granular..) and then played just like Kill Team (KT). It worked surprisingly well, and gave that tactical flavor that is missing from smaller games of 40K. 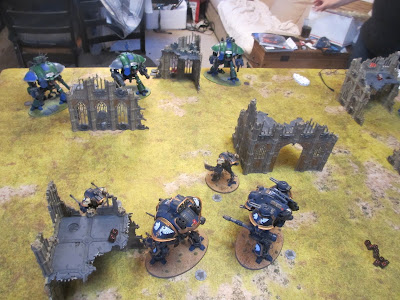 We did run into a few situations, which are addressed by some house rules:

Command Points. I like the way KT  generates Command Points (CP) every turn, but the 40K Stratagems are made expecting you to start with a few CP. So we decided that both sides start with 3 CP and generate 1 per turn, and a bonus 1 if your Warlord is still alive.

Splitting Fire: Vehicles may split fire freely, but must declare all targets before any weapons fire.

It's fun, easy, and makes for a more enjoyable robot fighting time!

Go Roll Some Dice
With a More Even Distribution of Killing


Posted by Marcus the Blackheart at 12:55 PM No comments: