Posted by Marcus the Blackheart at 12:05 AM No comments:

Fourth of July, time for BBQ, booze, and Apocalypse. And this time, one last battle with Fifth edition. 5000 points per side, Eldar and Imperium versus Orks, a timeless classic. Mrs. Blackheart took a lean army, and Matt took one model with his 2500 points. A big blue one. I took a whole lot of ladz. I had 146 models to their combined 38. This would be interesting. 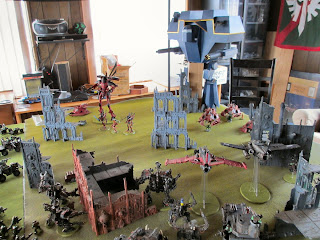 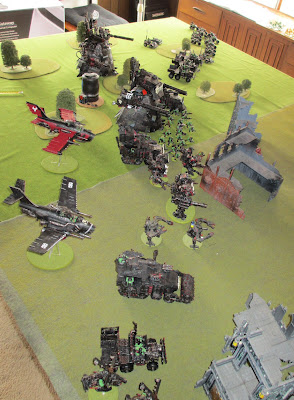 Being clever gitz, the Orks went first and quickly revealed both of my cunnin' strategemz. A shield generator, which both of the Stompas stayed close to, and Precision Strike, which give a 2+ to hit any one target to all units shooting at it, like a big blue one. I unloaded a horrendous amount of firepower upon the Warlord Titan. I immobilized it and took away 4 structure points, only 5 to go! The Orks took typically heavy losses, but both Stompas survived, due to the shield generator saving them from the worse of both titans shooting. 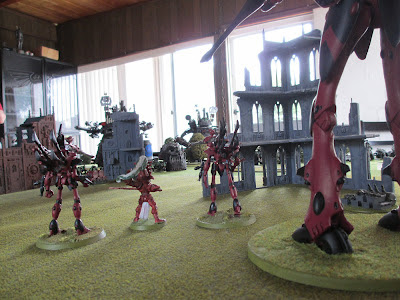 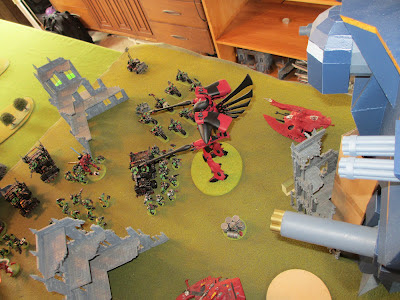 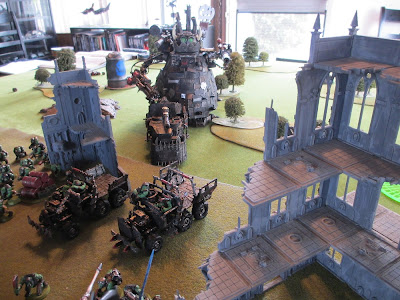 The Orks closed for the next two turns, losing one of the Stompas and a few of the Dreads. The small numbers of Eldar were overrun at great cost to the Orks. The Revenant Titan was brought down some lucky shooting that kept it from moving, and then it was swamped by angry boyz with power klaws. That only left Big Blue.

My last Stompa, Boss Mauler,  was badly damaged but finally got a good roll with the Gaze of Mork(or Gork) and took the last structure point from the Warlord Titan. Big Blue was not about to go quietly into that good night, oh my no.
I had moved in close figuring I would have to take Big Blue down the old fashioned way, with power klaws and tank-busta bombs. With no structure points left; Matt rolled on the Catastrophic Damage table and did not disappoint. The mighty Titan detonated in a 27" blast.


The Mega-Dread, a BattleBuggie, 2 Trukks, 2 Bikers, 4 Nobz, 12 Tankbusters, and 22 Boyz where vaporized. Only my Warboss, a Battlewagon, a Dread and a damaged Wave Serpent survived the fireball.

A fine time was had by all, although Matt was the most affected by my Ork-Fu treachery. He could have recovered from the totally cheesy goodness of the Precision Strike, but the Shield Generator making the Stompas obscured and giving them  a 4+ save was just too much to overcome.

Fun fact: In 6th edition obscured goes down to a 5+.

My pair of fighter jets where swatted from the sky with ease, I am looking forward to seeing them work in 6th. The current FAQ from Forge World gives Super-Heavies 3 hull points for every structure point, so that means the Warlord will have 27 hull points. Yikes.

So goodnight Fifth Edition, and thanks for all the fond memories.

Next up, our first 6th edition battle report.