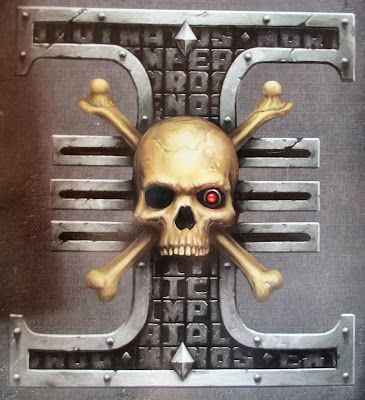 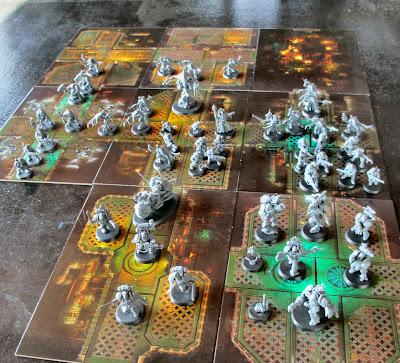 The Components
What is is in this box? A whole lot of awesome minis, eight very pretty, double sided board sections, Character cards, the ambush deck, a range ruler, some six sided dice, and the rulebook with nine missions and a linking campaign for them. 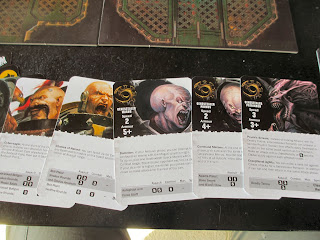 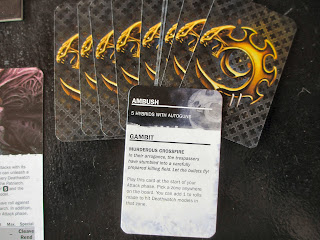 The figures are very detailed and easy to assemble. They are mono-pose, but that is not a real issue for me as there is good variety in the poses. The Deathwatch get the full spectrum of Marines, including two jump packs, a terminator, a bike, a librarian, and a chaplain. 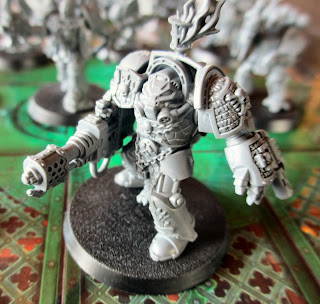 The Cult have an even wider range of figures. The Genestealer Patriarch steals the show, being a huge Genestealer standing on a pipe end. The Magus and Primus are very good looking as well. Two purestrain genestealers and a pair of familiars round out the command elements. The Cultists have sixteen 3/4th gen hybrids with twelve autoguns, two grenade launchers, and two with mining lasers. A nice dozen 1/2nd gen hybrids armed with pistols and close combat fun. Rounding out the cult are four Aberrants with industrial weapons. 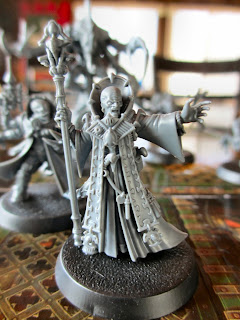 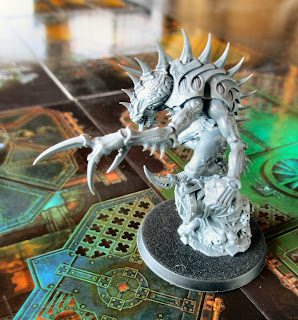 The Game
Neat stuff, but is it any good? Short answer? Yes. Overkill is a short, sharp tactical game. Missions last 20-60 minutes tops.

The Deathwatch Marines are killing machines, but they are badly outnumbered. The turn structure reflects this well. The Cult gets Ambush cards to either add more forces, or as a Gambit, which is some sort of trickery. Marines, move, then the Cult moves, Deathwatch shoots, Cult shoots, Deathwatch shoots again! Oh yeah, not to be trifled with.

All the Deathwatch Marines, the Patriarch, Primus, and Magus have two wounds. The rest of the cult have one. The Marines can heal their wound if they forgo shooting in a phase. Even with Deathwatch's badassery it often turns into a tense game as the cult just keep popping up.


The Fluff
Overkill follows Killteam Cassius as they investigate the disappearance of an Inquisitor on the mining hellhole know as Ghosar Quintus. Mayhem ensues.

Concise bios of all eleven members of the Killteam, weapon profiles, and artwork are well interspersed throughout the book.

The narrative that flows in the margins of the rulebook is an engaging story of one of the first encounters with the Genestealer Cult. And why some Marines should not be invited to parties.


Conclusion
I like it. It's fun, fast, and has that right "feel". It is not super detailed but it works. Rules for Stormtroopers are in next week's White Dwarf along with a new mission. It's nice to see it get some support. With a little effort it could be expanded further.

Now I'm thinking about stats for a Commissar and a Inquisitor.


The Four-Armed Emperor Protects
Just Join us and See

Posted by Marcus the Blackheart at 11:41 AM No comments: 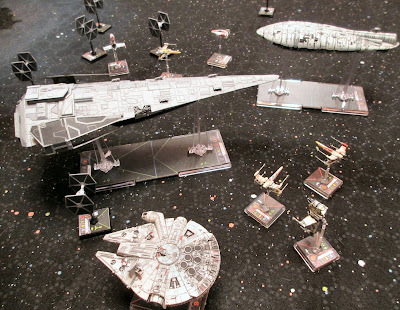 And now for a excellent X-Wing battle. It was a mission thought up on the fly, two GR-75 transports with escorts have to made it out of the blockade zone. Enforcing the No-Fly Zone is an Imperial Raider and six TIE fighters. 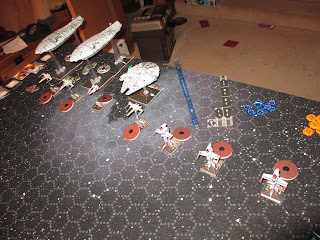 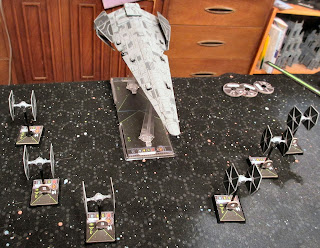 We played on opposite sides of  a 6'x4' area, which seemed to work out fine, aside from two turns with no shooting. On turn three, everybody's favorite decision time: The Merge! 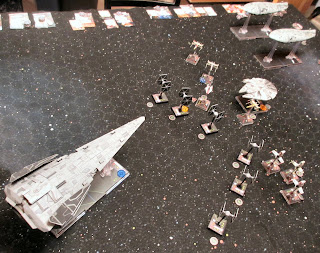 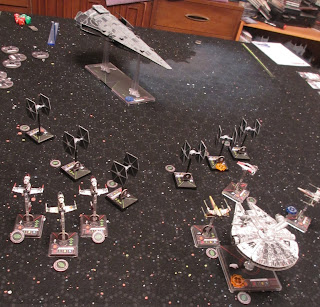 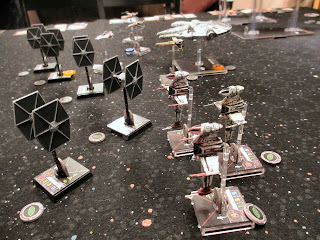 This is where your plan goes to die. For example, stopping short in front of a triplet of B-Wings. Not good. Two of my TIEs died in a hail of fire. It is always that fine balance of executing The Plan, but being flexible enough to take advantage of opportunities, and/or admitting The Plan has gone to hell and devising a new, better one without becoming bogged down in half measures and indecision. Like my Left Flank TIEs. Only one of which will get run over by a transport in two turns due to a poor not-quite decision now. 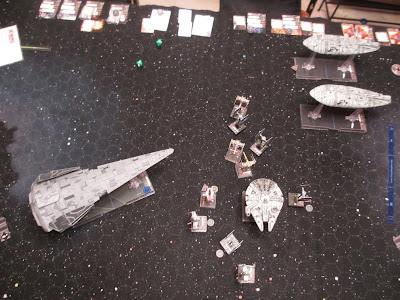 I was able to take out a B-Wing with the Raider's Quad Lasers, and do some good damage to a transport and the Millennium Falcon with the Raider's heavy guns. I love the Raider! Plus it's fun seeing all the fighters panic when they realize you may run them over. 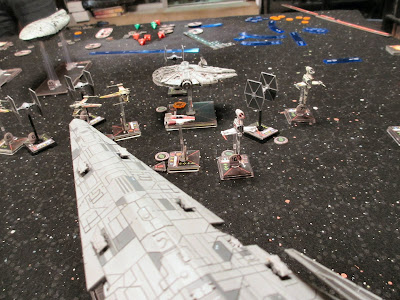 Of course I was guilty of that when it finally occurred to me that two of my TIEs where in a fatal attack vector to the transports. One just barely squeaked by, the the other one had a head on with destiny. 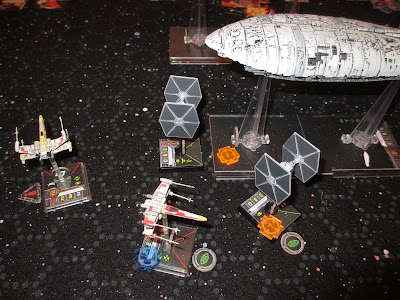 At least he took out a shield on the GR-75 when he went. Damn rookies. His wingman who escaped the collision died from a point-blank barrage from Wes Janson's X-Wing. Now I have one TIE left, but at least it is square on the Falcon's six and blasting away to good effect. 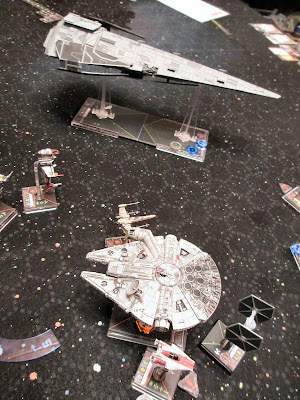 The B-Wings make a mess of the Raider's shields, but I manage to destroy one of them and a Rebel transport. My last TIE gets smoked by the A-Wing. Now the Raider is all alone with a X-Wing and a B-Wing in it's rear arc. Which has no guns. Bad show. 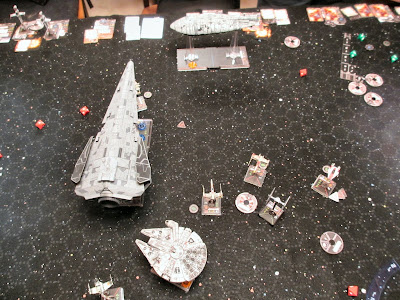 On what turned out to be the last turn, The Raider finished off the Falcon and did a lot of hits on the last transport. The B & X-wing get past the shields and do a few hull points on the Raider. We had to call the game due to time constraints.But what a good game! I don't play it enough, but I do love me some X-Wing.

Posted by Marcus the Blackheart at 7:09 PM 5 comments:

What's in the Box? 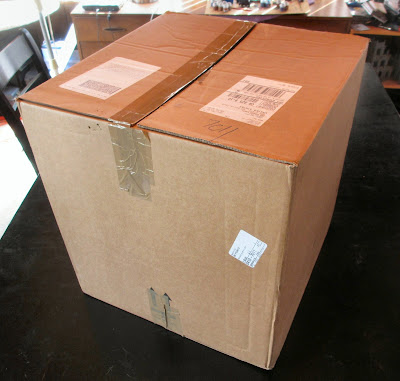 I've been down with Nurgle's "Death-Flu Blessings" for the last two weeks, no fun at all. Time to play catch-up.

A little while ago the UPS dropship delivered a rather large box on my doorstep. Big enough for a least seven Gwyneth Paltrow sized heads (or Willian Shatner if you prefer). In it are... 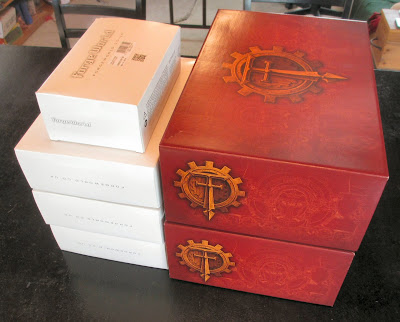 That is just one of the large red boxes. The second one is filled with very big parts. 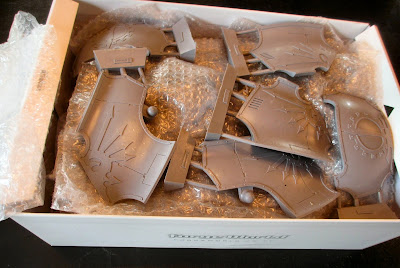 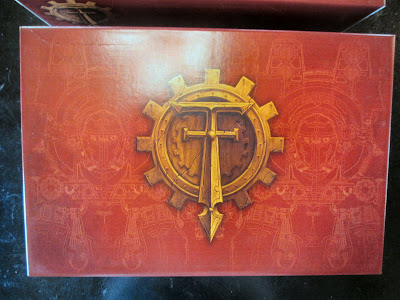 A far cry from the blurry two sheet photocopy that served as a rough assembly guide for my Warhound Titan, the Warlord's Construction Guide is a slick full-color book using the CAD drawings. 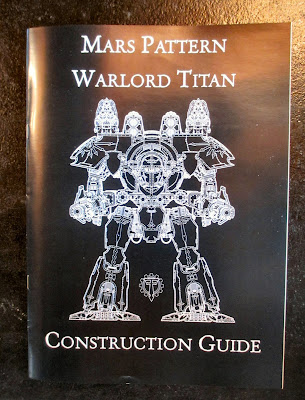 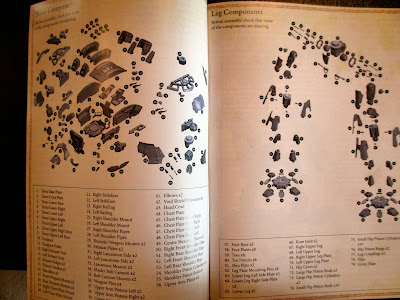 That is a lot of parts for just the legs and torso. All the sub-kits have a similar guide. It is really well though out and implemented. 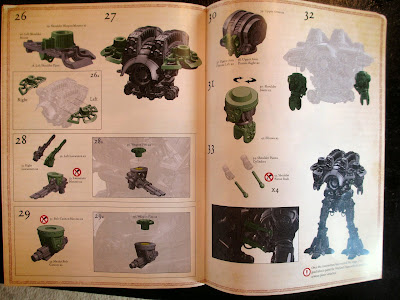 I did an inventory of all the parts the night I received the Titan, two hours later I discovered I was missing a part from the head. Thank the Emperor for a complete parts breakdown. I emailed Forge World and the replacement was on it's way. Fast and friendly customer service. Thanks lads! 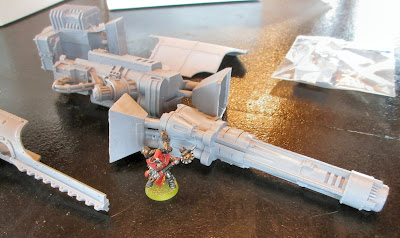 This will be  a massive undertaking, but my Enginseer staff assures me it will be glorious. I'm in the middle of (another) Dark Angel expansion and upgrade, but the Warlord shall rise after that project is complete in a month or so.

Posted by Marcus the Blackheart at 1:04 PM 3 comments: