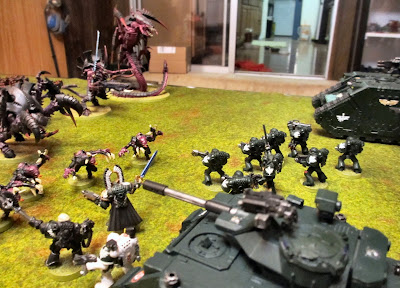 It is kind of hard to believe, but there was a time (long ago) when I only had two 40K armies. A compact Dark Angels force, and a brand new Tyranid Swarm. It seems only fitting to bring an updated approximation of those armies for our first 8th Edition Battle report. Including a few hold-outs from that era, including my first space marine, the veteran with the powerfist and cape. 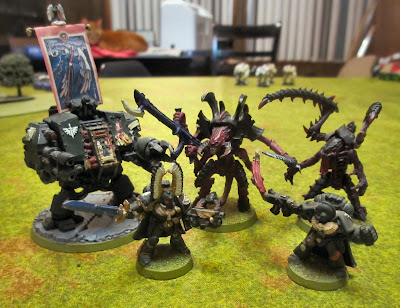 Rather than a blow-by-blow battle report, these posts will be just about our observations of the changes to 8th, and how the game plays overall.

We played at 100 Power Level, battle forged. The new 'Power Level' (PL) way is appealing, it significantly speeds up choosing your force. While it is a bit limiting on unit sizes (5 or 10 Tactical marines for example) you do get any options that unit can take as part of the PL cost, which if fun and for me more flavorful in the fluff context. You got a full Tac squad, why wouldn't they bring their full kit?
Of course detailed points list building is still available, if that is your kinda thing.

One of the big welcome changes was to the Battle Forged Force Organization Chart (FOC), to be specific, the addition of a wide range of detachment types. This makes for massive flexibility in army creation.

Battle Forged armies are important for two reasons: It makes armies that feel right in composition, and you get to use Command Points, more on that in a bit.

The missions have changed very little, a few new set-ups and some minor tweaks, which is fine with me. I'm glad they kept the Tactical Objective missions. What did change was the return of alternating deployment of units. A little slower, but removed the big advantage of deploying second. 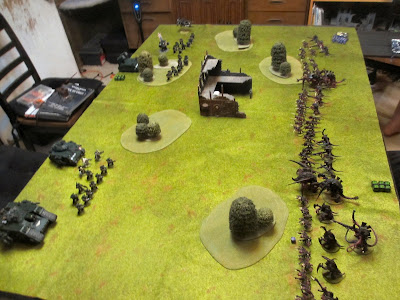 Movement Phase has a few changes: Advancing (used to be called Running) is now done in movement not shooting. This speeds things up a little since now you roll to Advance before you move your mini. Just add the D6 score to you Movment stat and off you go.

The big change in the Movement Phase is the addition of Fall Back. If you are within 1" of a enemy model you can disengage and move the hell away, you just don't get to Advance, shoot or charge this turn. The trick is all the models in the unit have to end their movement further than 1" away from a enemy. This means surrounded models cannot fall back, something to keep in mind during the pile-in and consolidation parts of the Fight Phase.

Reserves happen at the end of movement. How this occurs varies by mission and sometime unit type. Some missions still use the 3+ to show up, others you pick who shows up and when. Deep Striking units get to choose when and where as long as it is more than 9" from any enemy models. They may shoot and charge as normal.

Ah, Psychic Phase. The continuously shifting Psychic Phase. There has been at least three major different versions of this phase through the years, I've lost count. As someone who disliked the 6th/7th edition versions, I am glad to say I like this cleaner system (one of the many things lifted from Age of Sigmar). It is straightforward but still is able to have the full range of powers, and a simple way to try and nullify those powers.

Heresy Grows From Idleness
So Get Out There and Roll Some Dice!

Posted by Marcus the Blackheart at 2:20 PM 2 comments:

8th Out of the Box

So, one week into the release of New 40K and what do I think? It is glorious. I'll be yapping about it for the next few posts. Today, let's have a quick look into the Dark Imperium Boxed Set. Peter was kind enough to bring his over while I await mine in the mail.

Nice big box with a big price point. You really do get get a great value for your gaming bucks: 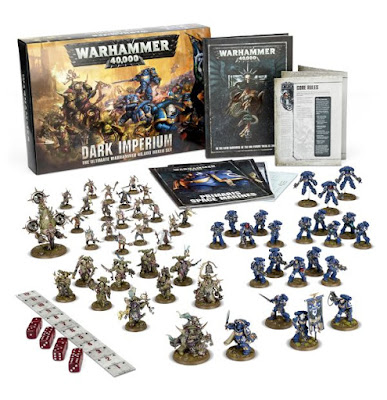 Of course, if Nurgle or the fancy new Primaris Marines don't tweak your twinkie, then the box is not for you, just get the Rulebook... 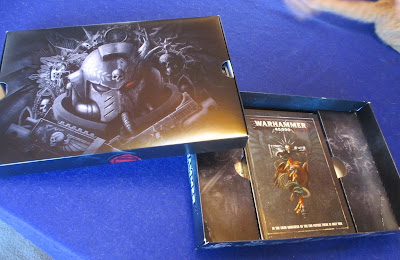 The first surprise is the box is not a box! More of a box in a tray with a slipcover. And in that box are the minis. Lots (54) of brand new really detailed figures.


The purity seal was a nice touch. I'll assemble my figs this weekend. 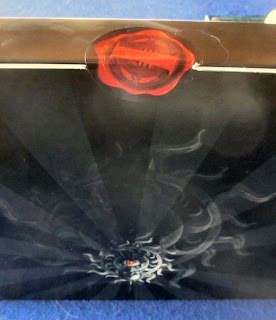 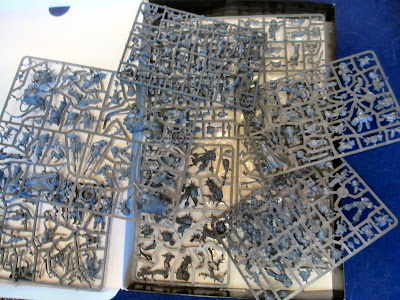 In the lower tray are the Hardcover Rulebook (more about that next post) the Mini-Codices, decals, bases, assembly guide, some nice red dice, and a fold out of the core rules. 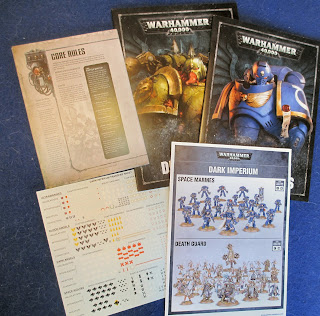 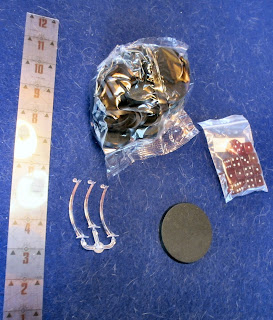 A cool thing about the two forces included in this box set is that they are two small armies ready to go. Thanks to Peter for running the numbers, They both come in at around 50 PL (Power Level) or 900-ish points, with the Marines having a bit more. I'm confident that the Primaris Marines and the Death Guard will be some of the first new releases; it will be easy to expand this basic force.

I'm pleased with the Dark Imperium set, and hope to get a game in this weekend.

The Emperor Protects
In New and Exciting Ways

Posted by Marcus the Blackheart at 2:20 PM 2 comments:

A Farewell to Templates 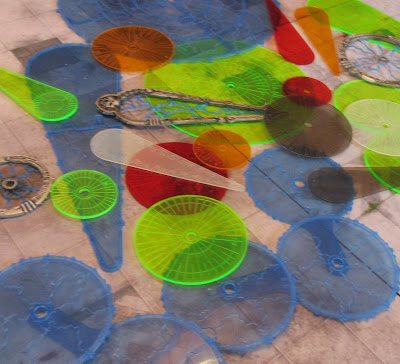 40K without templates? Madness and heresy! Well, maybe not...Templates have been a visual and fun part of miniature gaming for a very long time. The earliest reference I could find was a Napoleonic game from 1974 that used them for various sizes of cannon barrages.

Visually exciting and lots of fun to see how many hapless victims fell under the circle of death, but slow to use and the source of untold disagreements. 40k templates, like with all things over time, experienced constant expansion. Newer sizes and shapes, and oh so many colors! I had built up quite a collection over the years (the neron green ones were my favorite) yet it was somehow always tricky to find the right one, or a scatter die to see it landed.

My best guess is that the removal of bast templates from the game is a very good thing. It will speed up shooting by taking out all that guesswork and eyeballing of where the template landed and who is under it. We will have to wait another week before I can start trying out 8th Edition to see if my guess is correct. And I will have to find some way to repurpose my vast collection. A collage perhaps?

Go Roll Some Dice
Interesting Pie Plates for Sale
Posted by Marcus the Blackheart at 10:31 AM 1 comment: