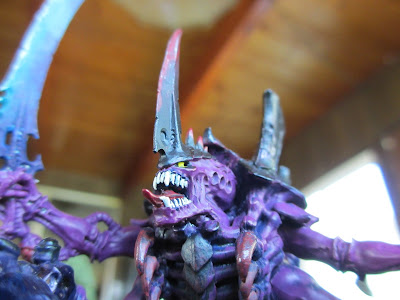 Way back in 2nd Edition 40K there was a tense mission called "Tyranid Attack". The 'Nids had six turns to kill everything on the table. All their dead units came back on as reinforcements. They usually won. Now it's time to redo this classic mission for 7th.

The Armies
Choose armies to an agreed point total.

The Battlefield
Set up terrain then roll for random deployment zones.

First Turn
The Tyranids are the attacker and get first turn.

Victory Conditions
The Tyranid player wins if there are no defending units on the field at the end of the game.
Units that are falling back or in reserve are at the end are not considered for victory conditions.

At the start of the turn, the Tyranid player forms her destroyed units into squads. These squads may be deployed with a different size than they started with, but must still conform to minimum/maximum squad sizes. Then the Tyranid player rolls for each squad. On a 4+ that unit is placed anywhere in the Tyranid's deployment zone or into ongoing reserves if desired.
Then rolls for reserves (if any) are made as normal.


Next up, a Tyranid  Attack BatRep

The Hive Hungers
And is Coming For Lunch
Posted by Marcus the Blackheart at 1:21 PM 4 comments:

Something Big on the Way 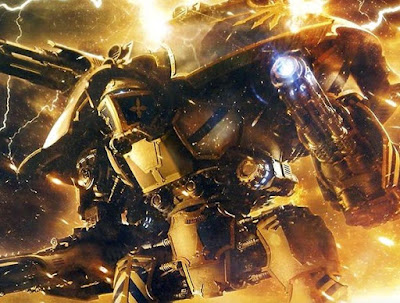 Well, somebody here did a silly thing. An incredibly awesome thing. Warlord Jeff bought a Mars Class Warlord Titan from Forge World. Yuuup. The pinnacle of 40K giant robots, and he has given it to me to bring to life. I can't say I didn't squeal like a schoolgirl, because that wouldn't be dignified.

It is currently on backorder, apparently Forge World is selling them at a good rate, and the kit takes a lot of time and effort to manufacture, no big surprise there.

I have built a Thunderhawk and a Warhound, and those were serious and often frustrating efforts. The Warlord is about four time the mass of a Warhound. It will be a heck of a thing. Be assured the titan-sized task of its construction and painting will be covered here. I'll try and keep the profanity and crying to a minimum.


The God-Machine Protects
Oh my, yes
Posted by Marcus the Blackheart at 11:40 AM 4 comments:

State of the Warlords 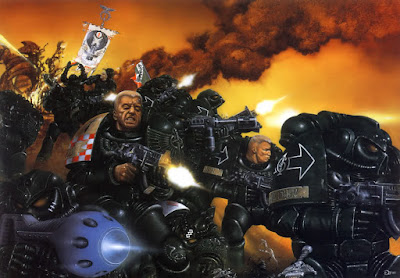 Happy New Year and all that. Let me yap about what the new year holds for the Atomic Warlords. Increased coverage of board games, a few more posts than last year, and a couple of big-ish projects.

I have been told several times that people prefer more, shorter posts over fewer, longer ones. I am going to endeavor to do that. I am aware that the Amazon Affiliates sidebar is AFU and I'm trying to get that straightened out. I will look into a few new miniature game systems, Gates of Antares, MERCS, and Warpath.

We are planning a 40K campaign for the spring, and a small unit Kill-Team/Necromunda type campaign as well. There are three armies of mine that need paint this year in addition to painting a few board game figure sets. Lots to do this year, it will be fun.


The Emperor Protects
He helps those who help themselves first


Posted by Marcus the Blackheart at 11:15 AM No comments: