Have you Seen this Tech-Priest?

WANTED FOR CRIMES AGAINST THE IMPERIUM OF MAN 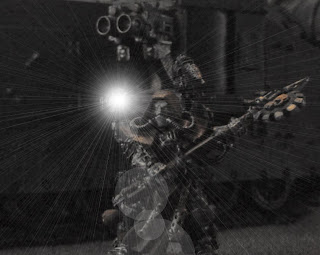 Magos Ozanam has begun an unauthorized dig on Leavitt II. An Imperial Guard Armored Company was sent to stop this activity and detain Ozanam until the arrival of Inquisitor Lord Augustus. The last report from the unit's Commissar claimed the entire company had joined forces with Magos Ozanam. Several unidentified warships entered orbit and began landing operations. It is believed that Ozanam has struck some sort of deal with Renegade forces known to be in the Kelton Sub-sector.

Lord Augustus has placed a plea for assistance. By the Emperor's Grace a Blood Angel strike cruiser had been dispatched to recover a Chapter artifact that Magos Ozanam had taken from a Imperial shrine has responded. Contact has also been made with a Space Wolf detachment and the always enigmatic Eldar said Ozanam must not uncover what was buried on Leavitt II.

This years Carnage-asada will be a 14,000 point Apocalypse battle. The Alpha Legion will be reinforcing the renegade Magos in his fortress at the center of the battlefield. The Blood Angels, Space Wolves, and Eldar have come to stop them. All armies have their own secondary missions. The Primary mission is to hold the objective markers and keep everybody else from accomplishing their goals.

Posted by Marcus the Blackheart at 9:54 PM No comments:

The countdown to Carnage-Asada '11 has begun!

Monday May 30th forces from all over the war-torn Kelton sub-sector will descend upon the mining outpost of Leavitt II in an Apocalyptic battle.

And we will be BBQing...carne asada! See, the carnage of the game with the BBQ, oh never mind.
More details soon.
Posted by Marcus the Blackheart at 12:30 PM No comments: 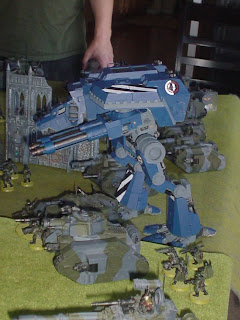 Lupis Rex advances with the lead elements of the 23rd Armageddon Lancers.
Posted by Marcus the Blackheart at 11:55 PM No comments:

Friday the 13th. Hell of a good day to re-launch my rambling nonsense.
Welcome to the Home of the Atomic Warlords. Let's start by describing what I hope to do here. Mostly this little blog will be about Warhammer 40K. Yeah I know the interwebs don't really need another 40K blog, but this one is mine. It won't be about "power" lists, the latest meta-game, or how to beat up small children at tournaments. Or how to avoid being beaten by children.

This blog will develop campaigns, scenarios, and modeling. We will show off our battles and armies. Wax poetic about how we play the game, and if you are really lucky, some philosophy of gaming in general.

The Atomic Warlords are an informal gaming group based in San Diego, CA.
Mostly we play 40k, mostly. But we do play other board and card games that I will yammer about later.

I love 40k. The background, the fluff, rolling dice with my friends and playing with little toy soldiers. Yes, GW isn't perfect, and the game mechanics of 40K really aren't as well, but I still love it. I have been playing this "Stupid Fracking Game" for 19 years. Yes, I have a lot of 40K stuff. Yes, I will be posting about all of it.

Stay frosty,
M
Posted by Marcus the Blackheart at 11:43 PM No comments: