The First Legion: A New Hope

I have watched for signs & portents. I have kept the faith. Long years spent in the shadow of our former glory is about to end. Finally, all of the Dark Angel faithful shall be rewarded with a new (and hopefully improved) Codex. Even though I am nowhere near done with my Chaos forces re-do, I can't wait for the new Dark Angel Codex.

We all got into this hobby/lifestyle/obsession somehow. For many it was watching a game at the local store, or a friend who showed you this cool sci-fi miniatures game. My gateway drug into the Warhammer 40,000 universe was Adeptus Titanicus, the first Epic Space Marine game.
It was a fun game, but I was really intrigued by the backstory. I next got into Space Hulk. Now I had the beginnings of my 40K forces and didn't even know yet. I bought some tactical marines to use in some of the missions, and that was that. My local dealer, I mean helpful friend, who worked at the comic/game store assisted me in filling out my growing space marine force into something that could be used in both games. When it came time to paint my first Marines, I had to choose a chapter. Not a lot of history yet for the Big Four Chapters, so I went with the Dark Angels mostly because I like the winged sword icon on their black armor. 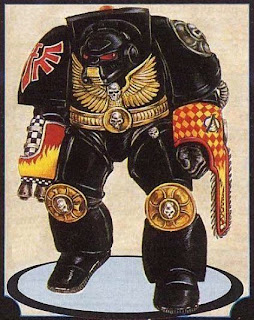 Within a year of painting my small force I was introduced to a new phenomenon, the army re-do.
My Terminators turned white! Everyone else went dark green! At least I didn't have to repaint my Chaplain.

A mere two decades later and I have the entire 3rd Company, a chunk of Deathwing, Ravenwing and a Thunderhawk. What? I like the Dark Angels. So yeah, I look forward to this newest Codex.

And speaking of looking forward (see what I did there Kenny?) 2013 should prove to be a most entertaining year for the Atomic Warlords. We have two mini and one large campaign planned as well as our league.
I have so much painting to do. Thanks to all for 2012 and have a Happy New Year!

The Emperor Protects
The First Legion more than others

Posted by Marcus the Blackheart at 5:47 PM 2 comments:

When There's No More Room In Hell

New Codex, old enemies. Plague Zombies have long been one of those units have have rules, and then aren't  updated for nigh on a decade. Both Pete and I have had zombies in our Chaos forces since The Eye of Terror Codex in '03. As we are still trying out the new Chaos Codex it was time for Zombies. And who better to bring their shambling bodies upon the battle field than Zombie Wrangler Pete? 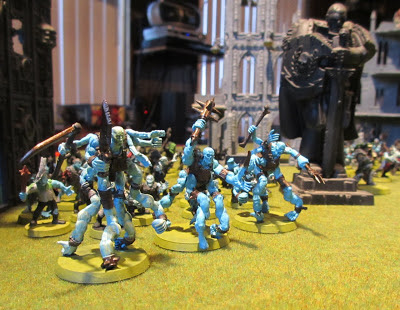 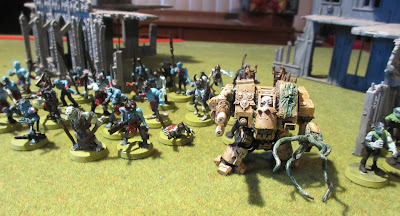 It's time for the 1,000 point Zombie Challenge! Pete brought Typhus, a Drea-, er, Hellbrute, a trio of undead body constructs (counts as chaos spawn) and a whole lot of dead guys. 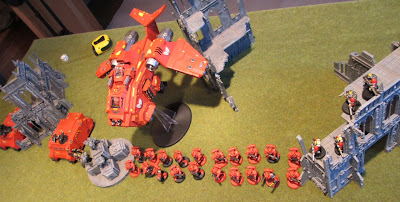 Commander Matt was brave enough to be volunteered as the first battle. None of us really knew how it was to play out, so Matt's Blood Angel detachment turned out to be far too few in number and had no blast/template weapons.

The Stormraven did cut a swath though the zombie horde for a turn and looked to be the deciding factor in Matt's favor. Then a single lucky shot from the Hellbrute's Reaper autocannons brought it down. Thus the Blood Angels fate was sealed. Matt fought on valiantly but the numbers were stacked against him. 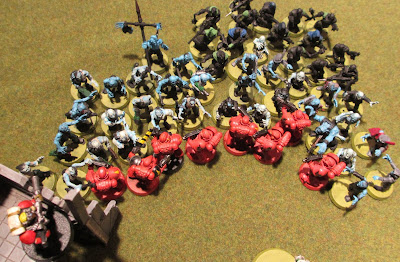 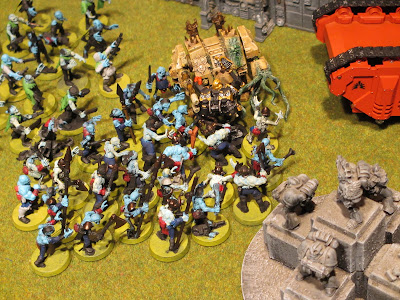 The day was carried by Typhus' warband. With these lessons paid for by the Blood Angels, the Steel Legion stand ready to halt the spread of the Zombie Plague with fire!

The Emperor Protects
Just not against hot dice

Posted by Marcus the Blackheart at 10:22 AM 2 comments:

Fire. And lots of it.

Flamers have gotten more useful in 6th edition. My Steel Legion army had none, because in their Great Wisdom, GW never made any for them. Meltaguns either, but I use the Grenade Launchers as Meltas.

Many times I had suffered Ork, Dark Eldar, and especially Tyranid attacks and wished I had a few at my disposal. Now with the fun and horrifying prospect of hordes of zombies (see next weeks post) I really need some. What to do?

I set out with a vague plan and things went from there. The old metal Steel Legion troopers only had one pose that was good for the conversion I had in mind. I took a pair of flamers from my yet to be made Cadians, some cutting, some green stuff, and flame on! Now I need to pick up a new Hellhound...

The Emperor Protects
But the Promethium Helps

Posted by Marcus the Blackheart at 1:17 AM 2 comments: