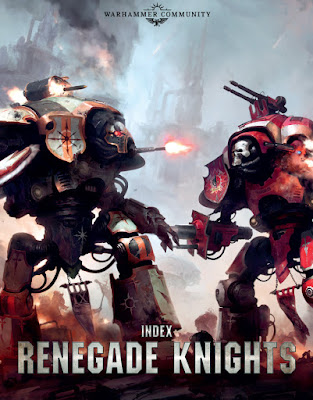 Duncan does not approve.


A nice little free mini-index to use all the Knights for the Ruinous Powers. Only one Warlord trait, one Relic, and two Stratagems, but I think that will grow with White Dwarf articles and Chapter Approved 2018.

Will this pave to way for a full Codex in the distant Future? Magic Eight (Pointed Star) Ball says, "Most likely".

At the rate GW is releasing Codexes they will need something to do after the Sisters are released next year.

Now I really have to paint up the new Knights in my Household to deal with this expanded threat.

All Fall To Chaos
And Get Free Tentacles!


Posted by Marcus the Blackheart at 3:45 PM 4 comments: 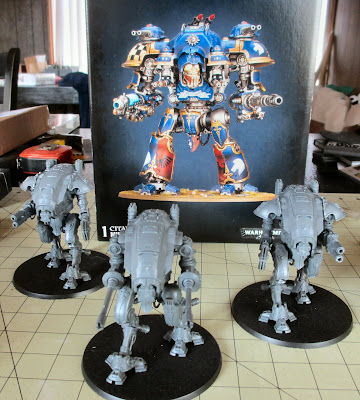 I received my Knightly reinforcements! Let's have a look:

The Codex: Up to the usual (excellent)  GW standards, great art, good photos, and a consistent 8th edition layout. The most Knight units ever! A far cry from the first Codex with only 4, the Questor Imperialis now has a staggering 10 plus a special character! Seriously, the new units add a welcome variety to the army. The Dominus-class is a great centerpiece, and the Armiger are nice Calvary/flankers.

I'm still going over the stratagems, Freeblade abilities, and relics. One kinda odd thing about the Armigers is that you may take them 1-3 in a unit. Being a Lord of War choice, this makes absolutely no difference. You could take six in separate detachments, or in two. They don't count towards being Battle Forged (you need 3 of the Dominus or Questor class) so I'm not real sure about why it matters what detachment they go in.

The Accessories: The Datacards are useful, with Tactical Objectives, Stratagems, and the Freeblade abilities. New this time around is a deck of actual Datasheets. I've been hoping to see these for each codex, so maybe this is a start. Each Datasheet has every stat you need for the unit, so very handy during a game. And lastly is the Battle Gauge! Etched stainless steel! Looks really cool! Too small to really use with the Knights! It will work well for my Admech force...

The New Models: The two big 'uns are, well big. I only have the Castellan at the moment and I can't wait to put it together this weekend. Lots of detail and clear instructions. The Armiger Helverins I did assemble, and they go together well and quick, with just one little annoying bit to the assembly.

My question is why are the different versions split up into seperate boxes? I was surprised to see the Castellan and Valiant as separate kits, but I was downright shocked that the Armigers were two different boxes. That kinda sucks to be honest. Coming two to a box being to only way to buy them, it makes mixing types a pricey endeavor. Not any kind of deal-breaker, but damn, couldn't GW put in to options for both types in the box like they have for past kits? Oh well.

The Sector Mechanicus Sacristan Forgeshrine terrain piece is a good deal. Over half of a Galvanic Magnavent kit ($75) plus a sprue of various cool stuff for $40.

The Special Character and the new Knight version apparently won't be out for a while. That's okay, my bank account needs some recovery time.

Overall I am very pleased with the Knights upgrade (aside from the boxing issue). I'll get the new stuff painted and on the field in a few weeks for a propper battle report.


Muster the Knights!
There Are Plastic Heretics To Smite

Posted by Marcus the Blackheart at 11:31 AM No comments: 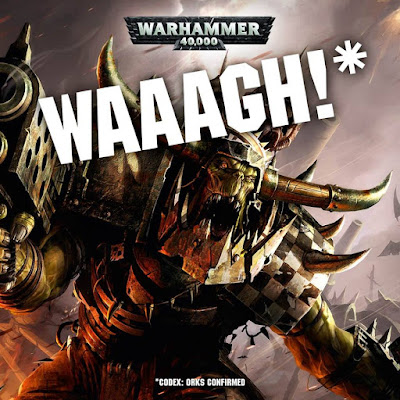 This just was posted on Games Workshop's Facebook page. Orks than Wolves?
That works for me.

Xenos Incoming
Good, My New Knights Will Be Waiting
Posted by Marcus the Blackheart at 5:38 PM 1 comment: