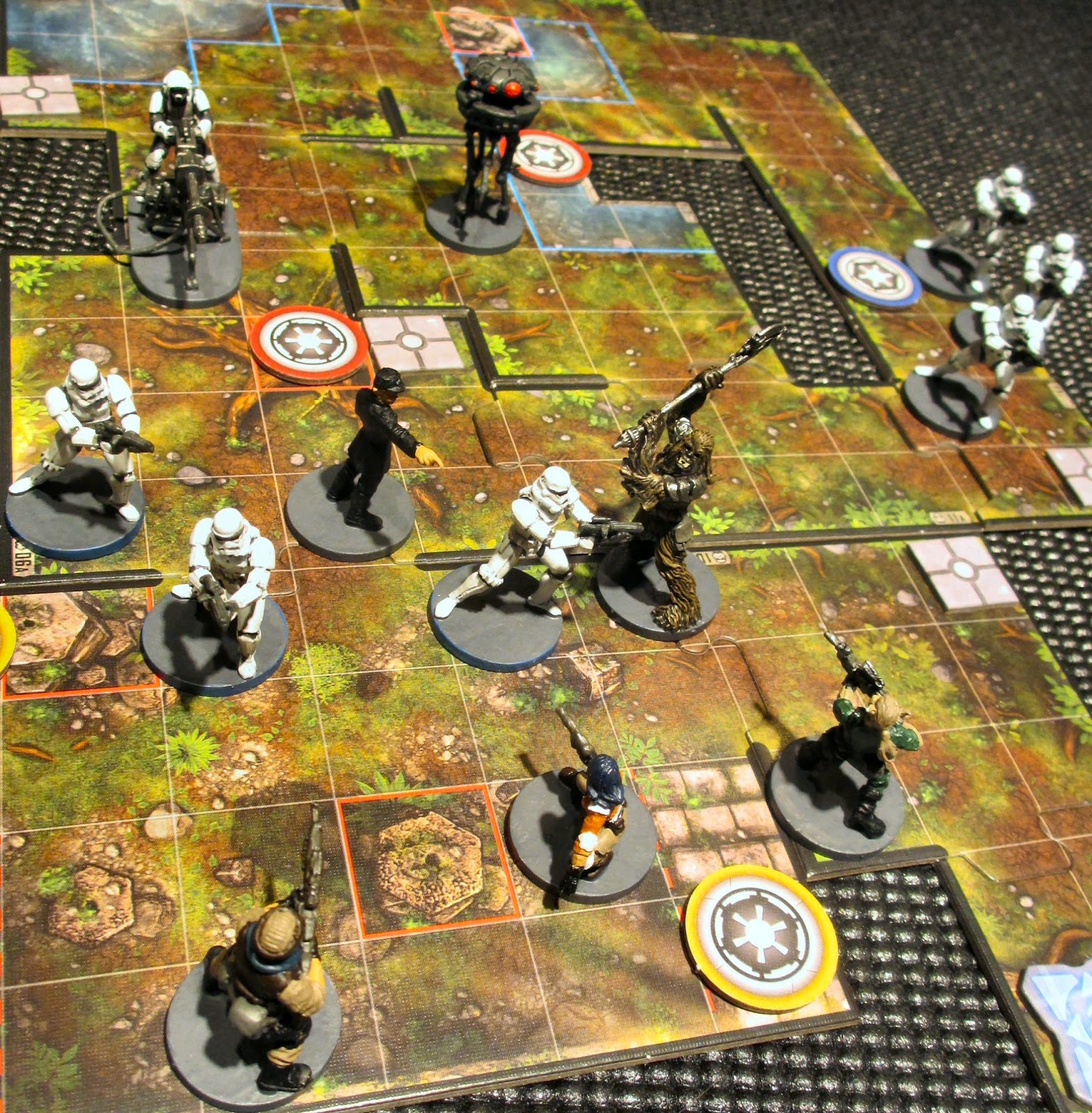 Imperial Assault comes with standard Fantasy Flight excellent components, but how does it play? First let us define what this game is. It is a tactical combat board game with two modes of play: Skirmish and Campaign.

Game mechanics wise, it is straightforward and quick. Players activate a character or a deployment group(i.e. a unit of three Stormtroopers). Each figure gets two actions on their activation: Move, Shoot, Interact, or Special. Character Heroes may also rest/heal. Play alternates in this way until both sides have activated all units, then the turn ends.

Combat is done with colored six sided dice for attacking and defense. The dice all have special symbols on them.  The only real tricky part of the game is learning to use them, and that does not take long at all. Using the gridded map makes moving, range and line of sight quick and easy.

The Campaign game is for 2-4 players, one person taking the Imperial Forces and acting as GM with the other players being the plucky Rebels. In this mode the games acts like a light Role Playing Game. The Imperial player doing typical GM stuff, revealing the missions, throwing surprises/events  at the players, and playing the Bad Guys. The players keep the same characters for all ten missions of the campaign and increase their skills and gear while doing so. The Rebel player's characters are also cinematically heroic, and they need to be, normally facing large number of Imperials. 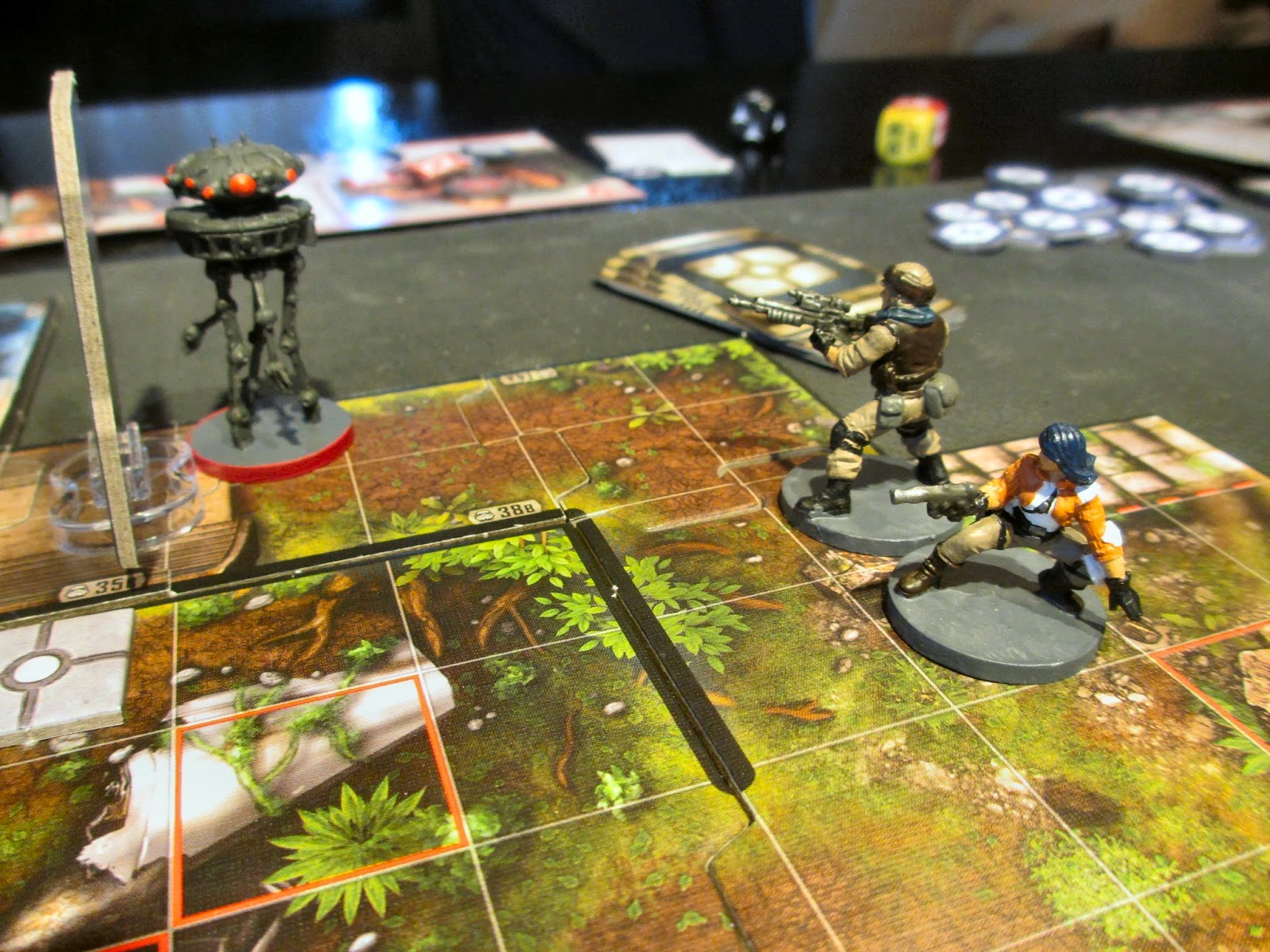 The Campaign lasts ten missions, but they are many different side missions that can come into play and the main story missions are branching so you can play the campaign a number of times without it becoming repetitive. The Rebel player has six different characters to choose from, so again another chance to make subsequent plays unique. You do not get to play as any of the iconic Star Wars characters (Luke, Han, Chewie) but there are mission to play with them as allies to your team. 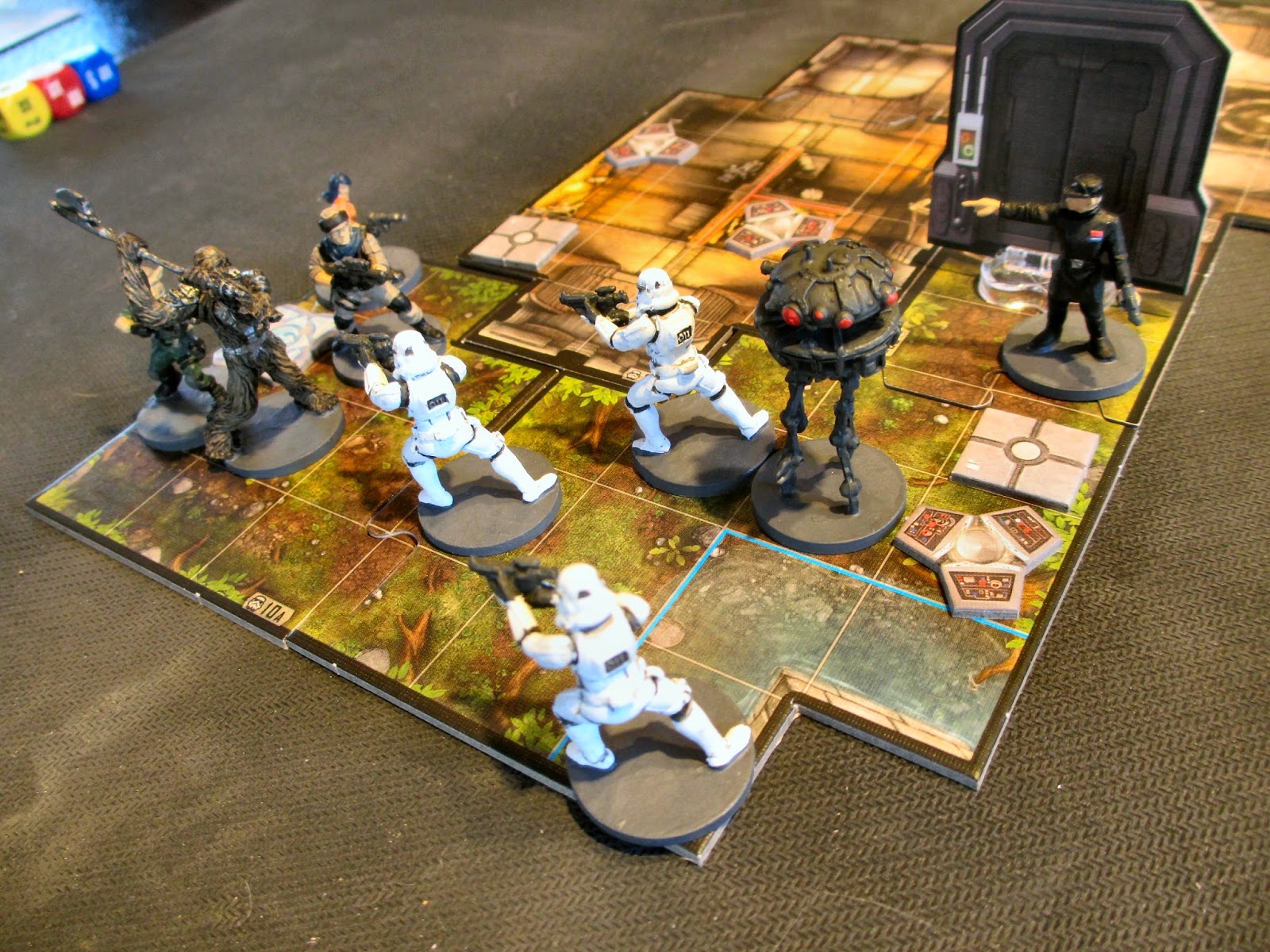 Campaign missions are no walk in the park for the Rebels. All the ones we have played so far have been very challenging to the players, most of which came down to the last turn. After the mission both sides get experience points to spend on new skills and upgrades. The Rebels get Credits, which they can spend on shiny new gear and weapons. The Imperial player may receive Influence points to buy fun cards that will make life a bit harder for the heroes. 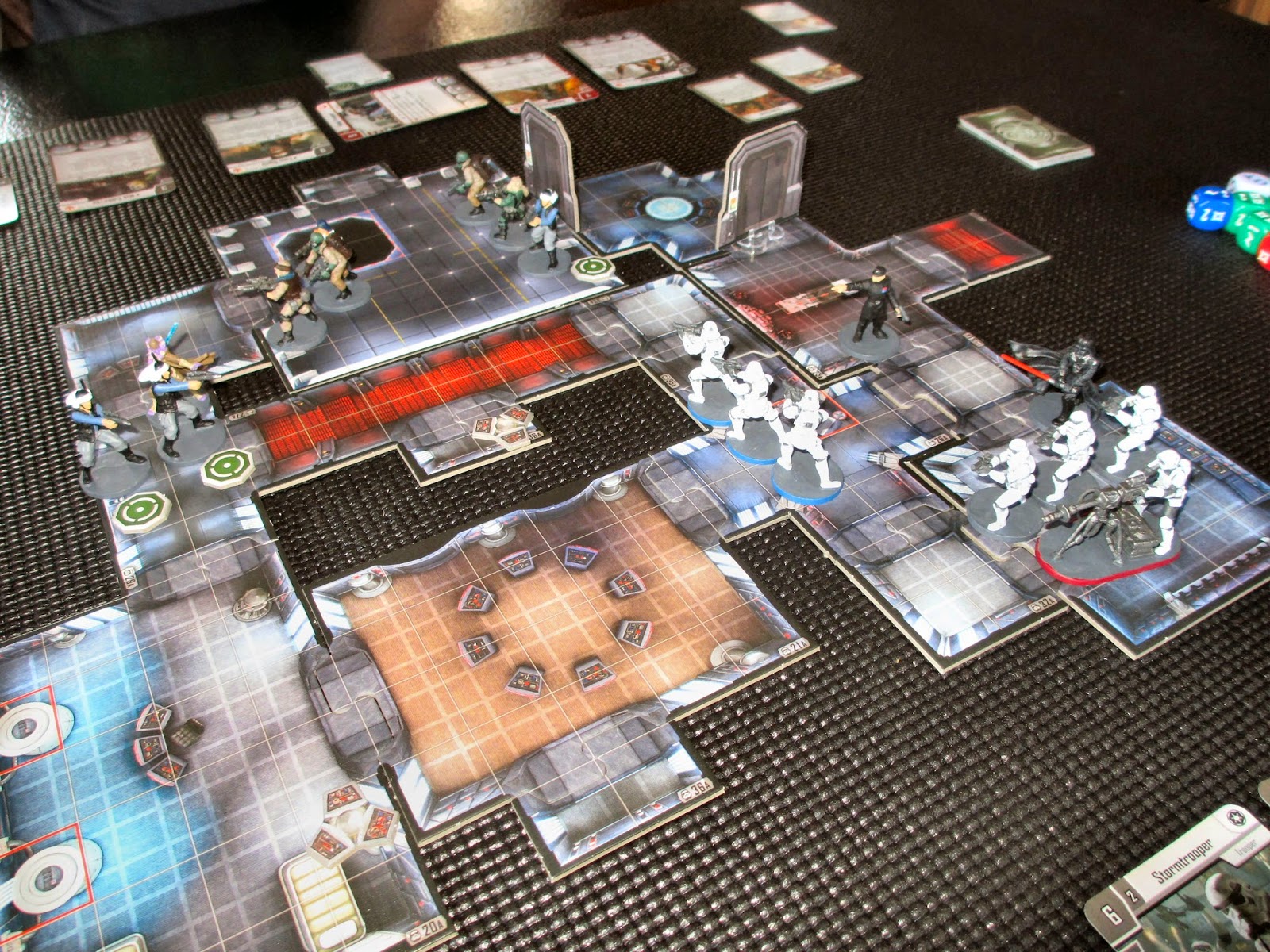 Skirmish mode is a battle between two players. Each player buys 40 points worth of forces and they fight in a randomly picked mission. No super-heroics in Skirmish, the six Rebel characters from the Campaign have "normal" cards for them. Each player also gets a 15 card deck of Command Cards which give bonuses to your team. Skirmish plays very quickly, and the missions are well thought out. 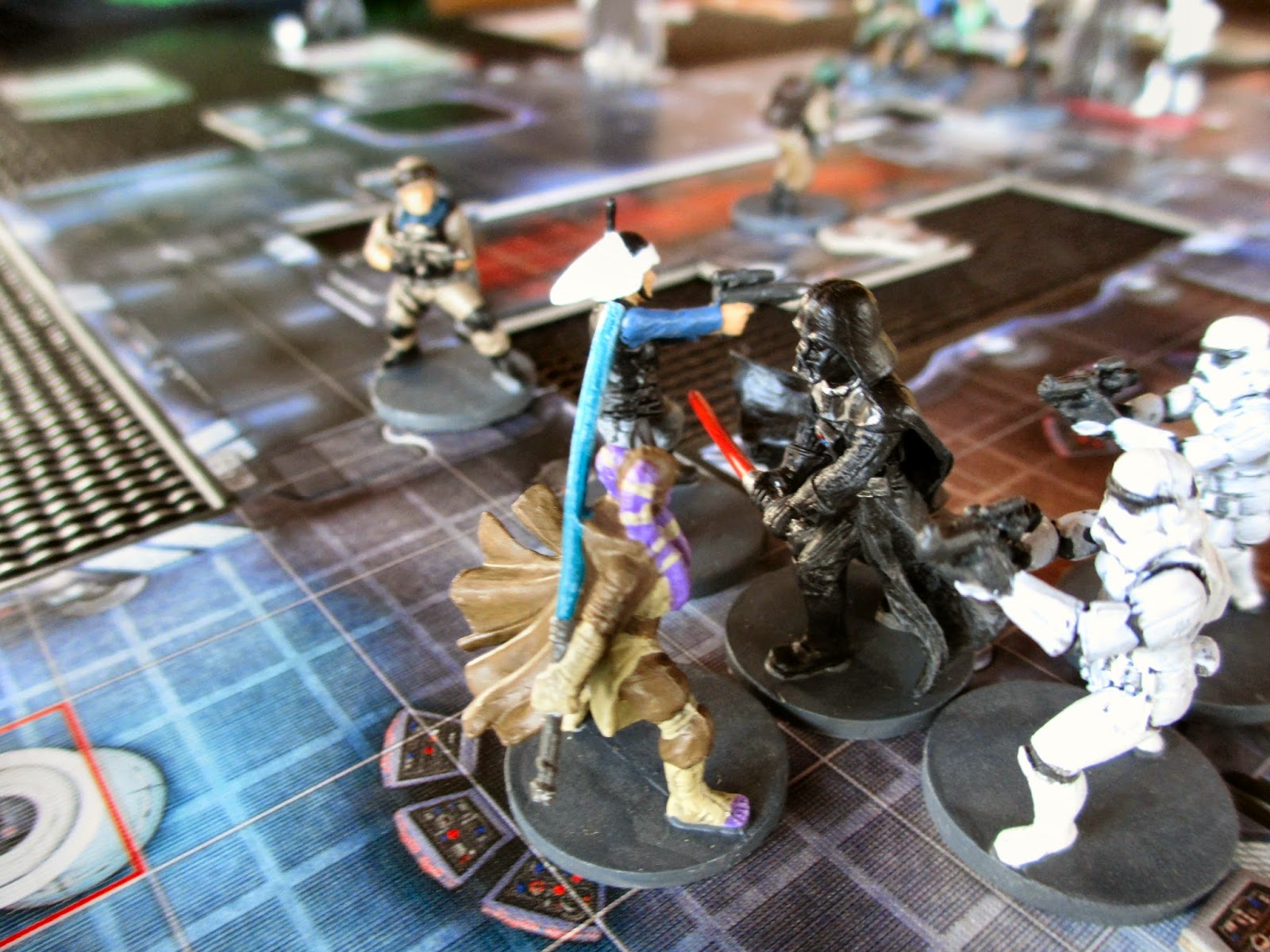 In one mission I took Darth Vader (who is almost half of the 40 points you get) and a had a great time slaughtering rebel scum, but I did not have enough other troops to achieve the objectives faster than my opponent,  I lost the mission quite badly.
On the flip side of that, in the next mission I had Han Solo, Chewie and some Rebel troopers versus Bounty Hunters led by everyone's favorite Evil Cappuccino Machine, IG-88. I got almost everybody killed (mostly from a pair of Nexu) and only had Chewie left. I pulled out a win by completing the objectives, and a bit of bloodlust on the Hunters part. Skirmish mode is fast and a lot of fun.

Imperial Assault is a winner. Great if you like tactical combat in the Star Wars universe. Doubly great is you want a RPG-ish narrative campaign. FFG already has more expansions on the way, and I'm sure this game has a fun, bright future ahead of it.

Go Roll Some Dice
Exeunt, Pursued by a Nexu
Posted by Marcus the Blackheart at 11:24 AM No comments: 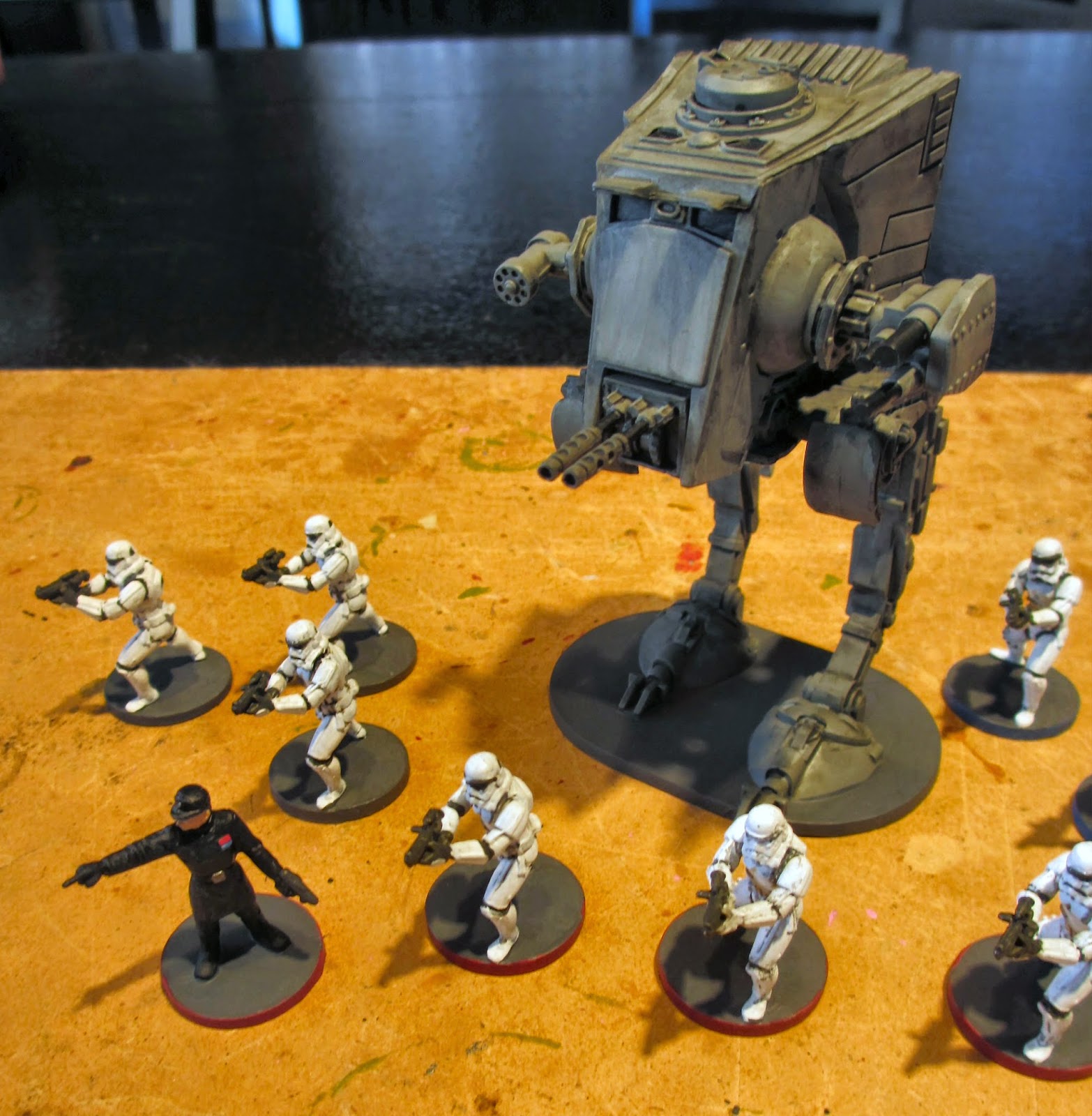 When Fantasy Flight Games released Star Wars: Imperial Assault last December I was a little sceptical. Yes, I love X-Wing, but could they really pull off two good Star Wars miniature games? I was especially dubious when I heard it was based on FFG's fantasy dungeon-crawler Descent, which I didn't really care for. Yeah, well, turns out Imperial Assault is very good. So good I decided to paint the figures that came with it. And the expansions.

The Figs are a firm plastic with decent detail, some better than others. The Imperial are molded in grey plastic and the rebels in tan. They look quite good for boardgame level miniatures, but I could not stand to have a grey Darth Vader. So I took the plunge, and so did all the miniatures. 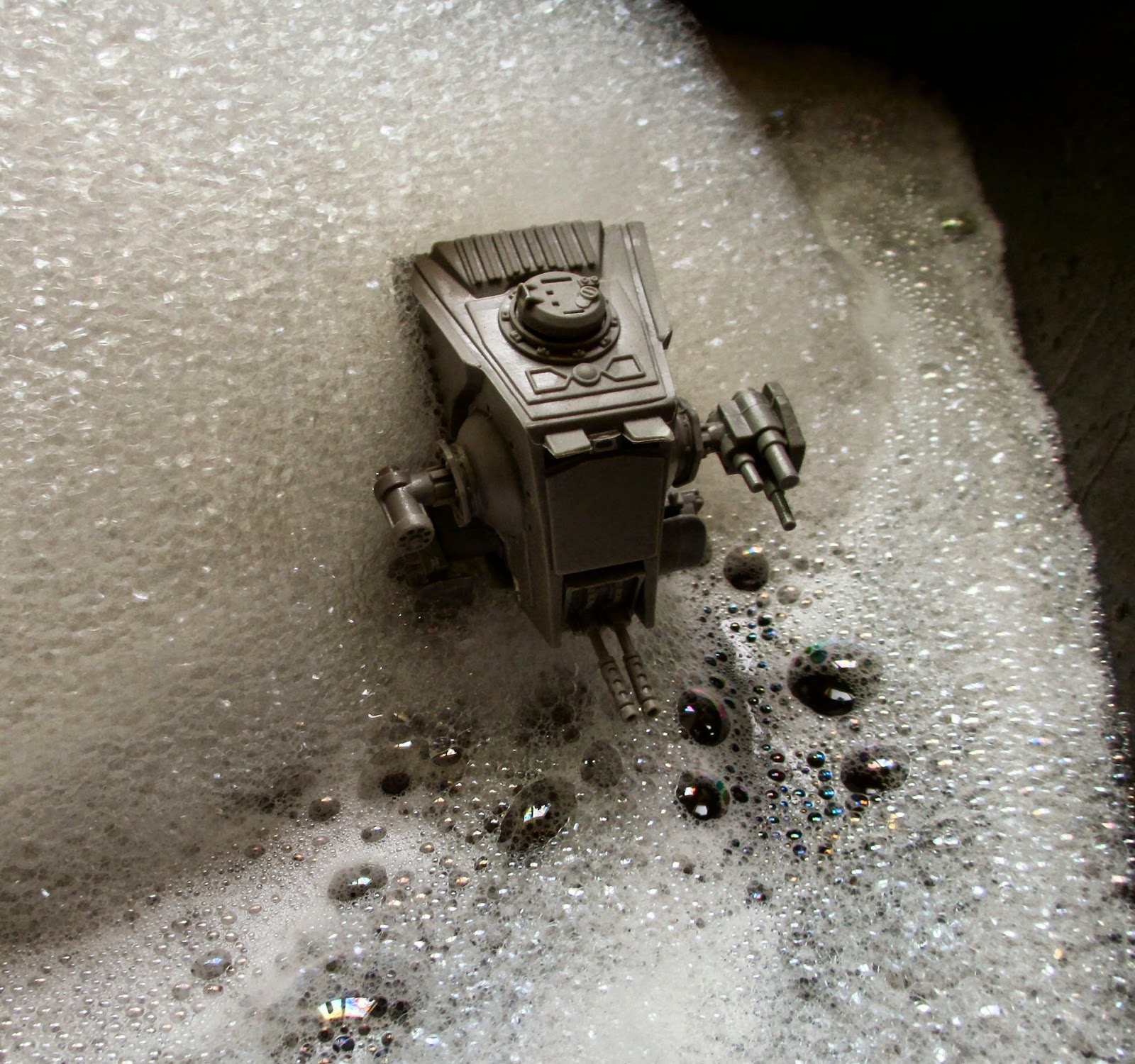 After a nice warm soapy bath to clean off all the release agent from the figs it was priming time.
Most of them got white primer, but Vader and few other received a black coat. It has been many, many years since I painted a non-GW fig, so this was novel to paint a different kind of stormtrooper.
I still used Citadel paints, just a brighter palette that I usually do. I didn't spent a huge amount of time per figure, so they look good from two feet away. 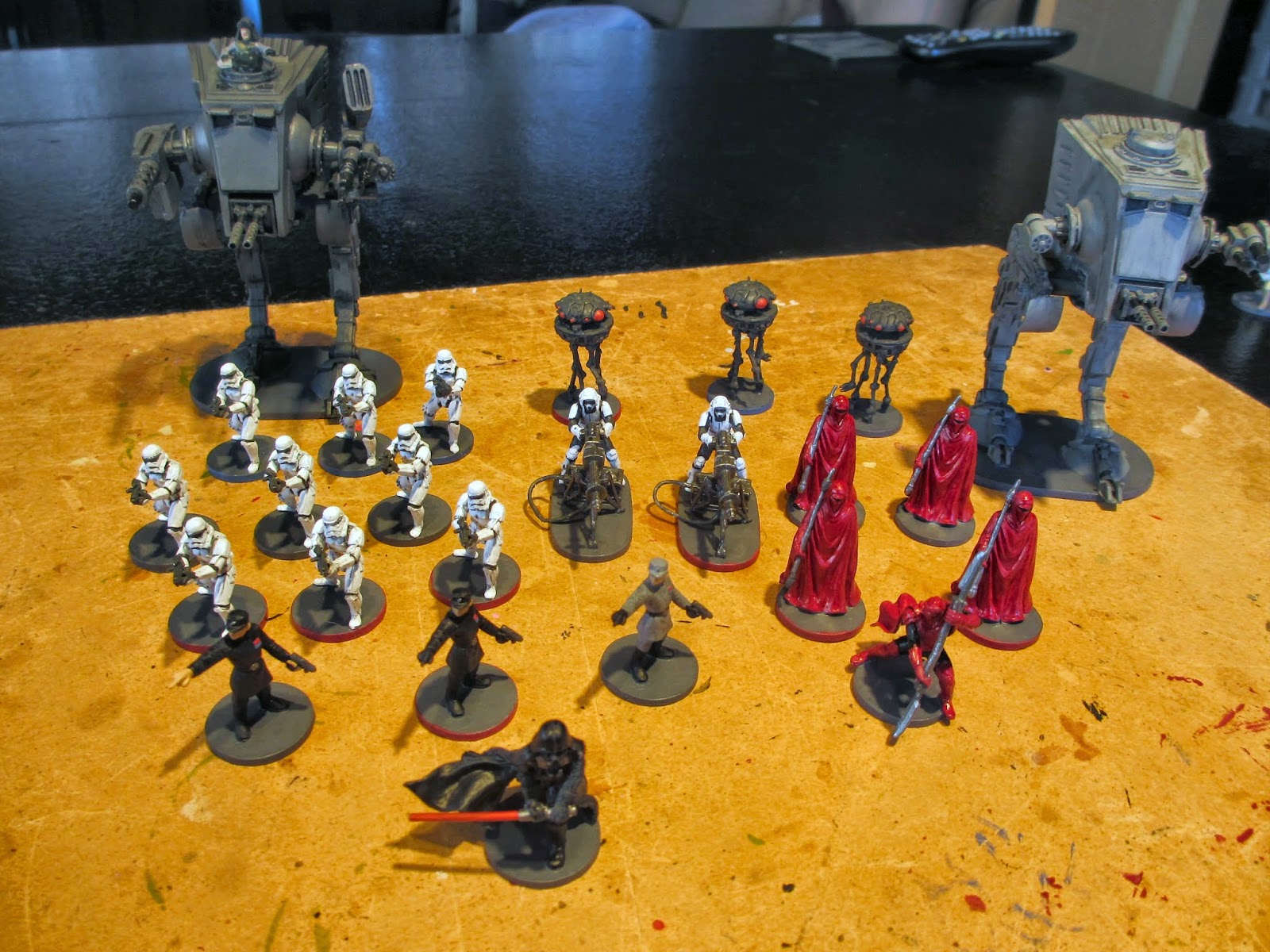 The Stormtroopers were by far the trickiest ones to paint. I used a black wash over the white, and then went back and re-painted the parts that were supposed to be white. The AT-STs were the easiest. Grey spray paint followed by a heavy black wash and finished off with a little bit of detail. 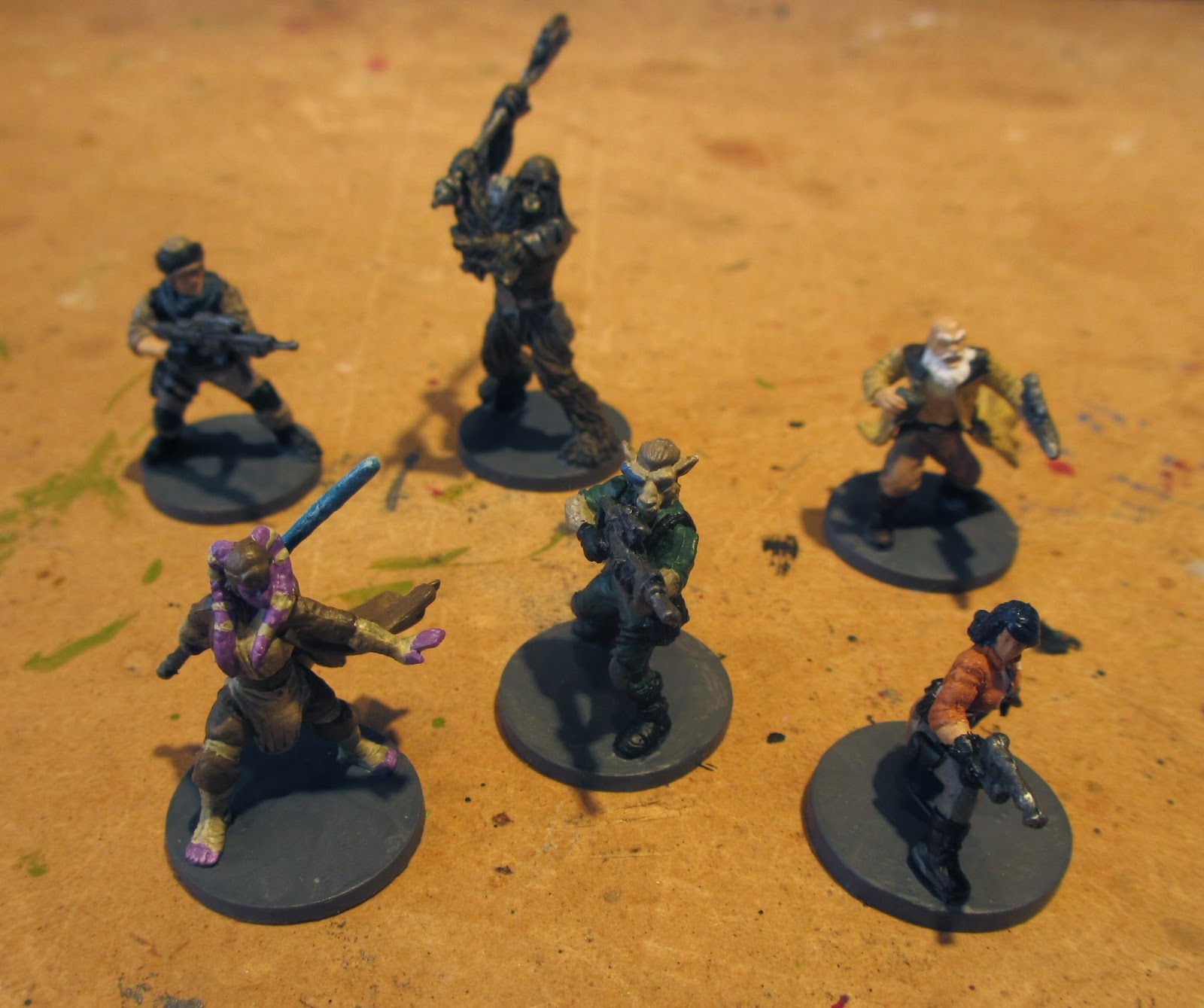 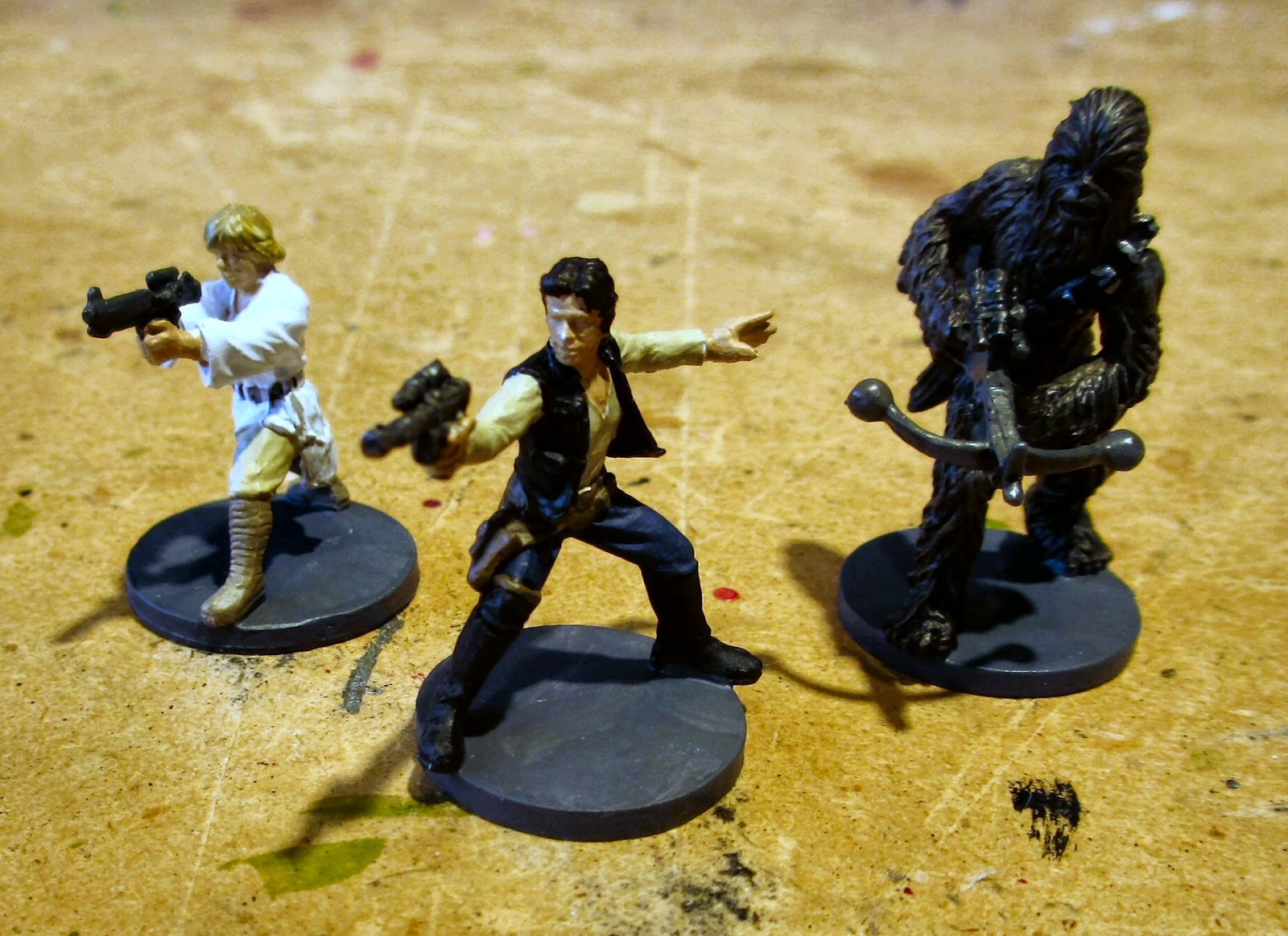 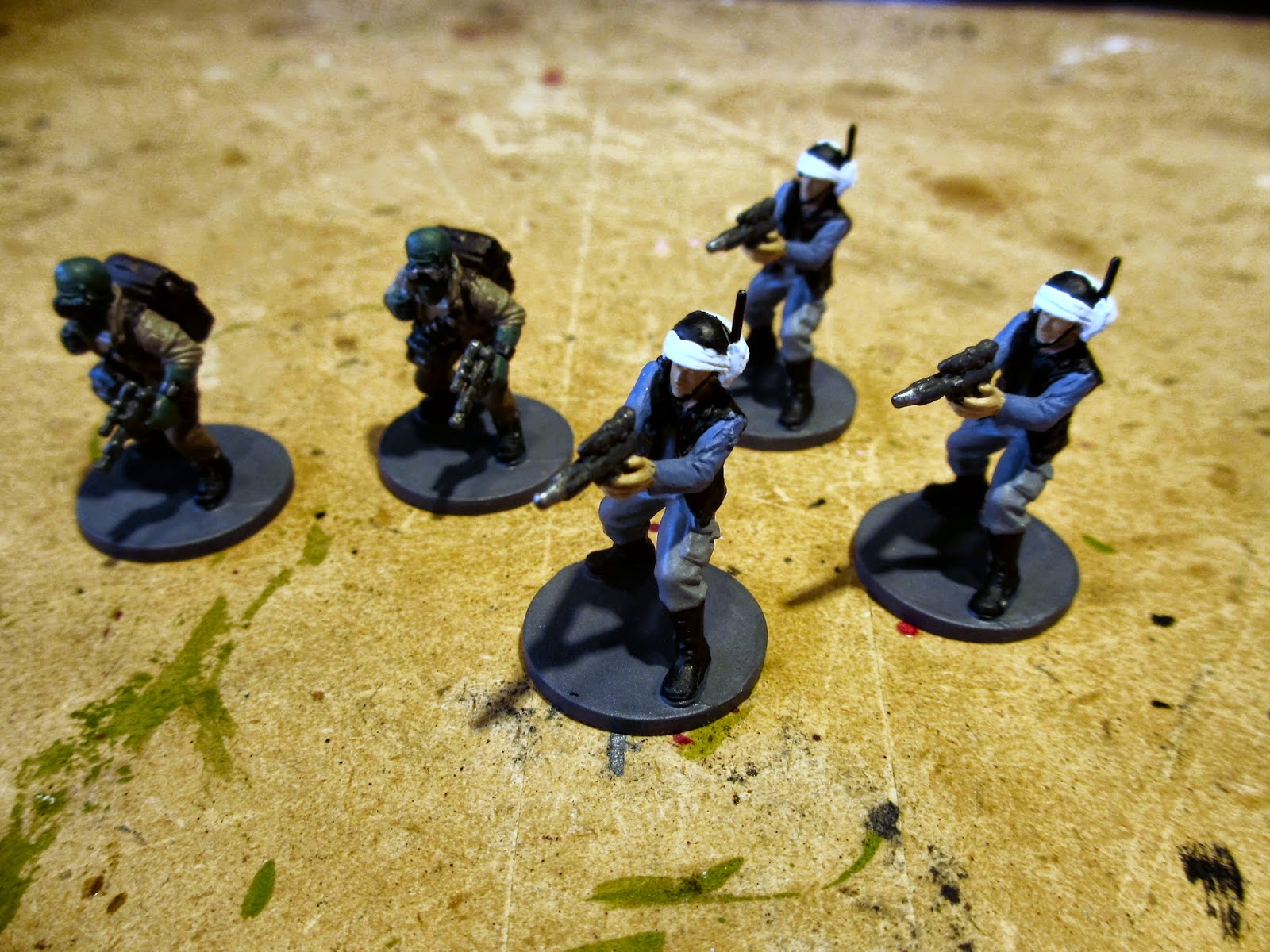 The Rebels were fun and fast to paint. I had always though that Han Solo was wearing a white shirt and black pants. Not so. I actually used internet research for good! Luke Skywalker's sculpt is quite nice, I'm just not sure why they chose his "Escape from the Death Star" look as the campaign is set right after the Death Star is destroyed. Totally minor quibble. 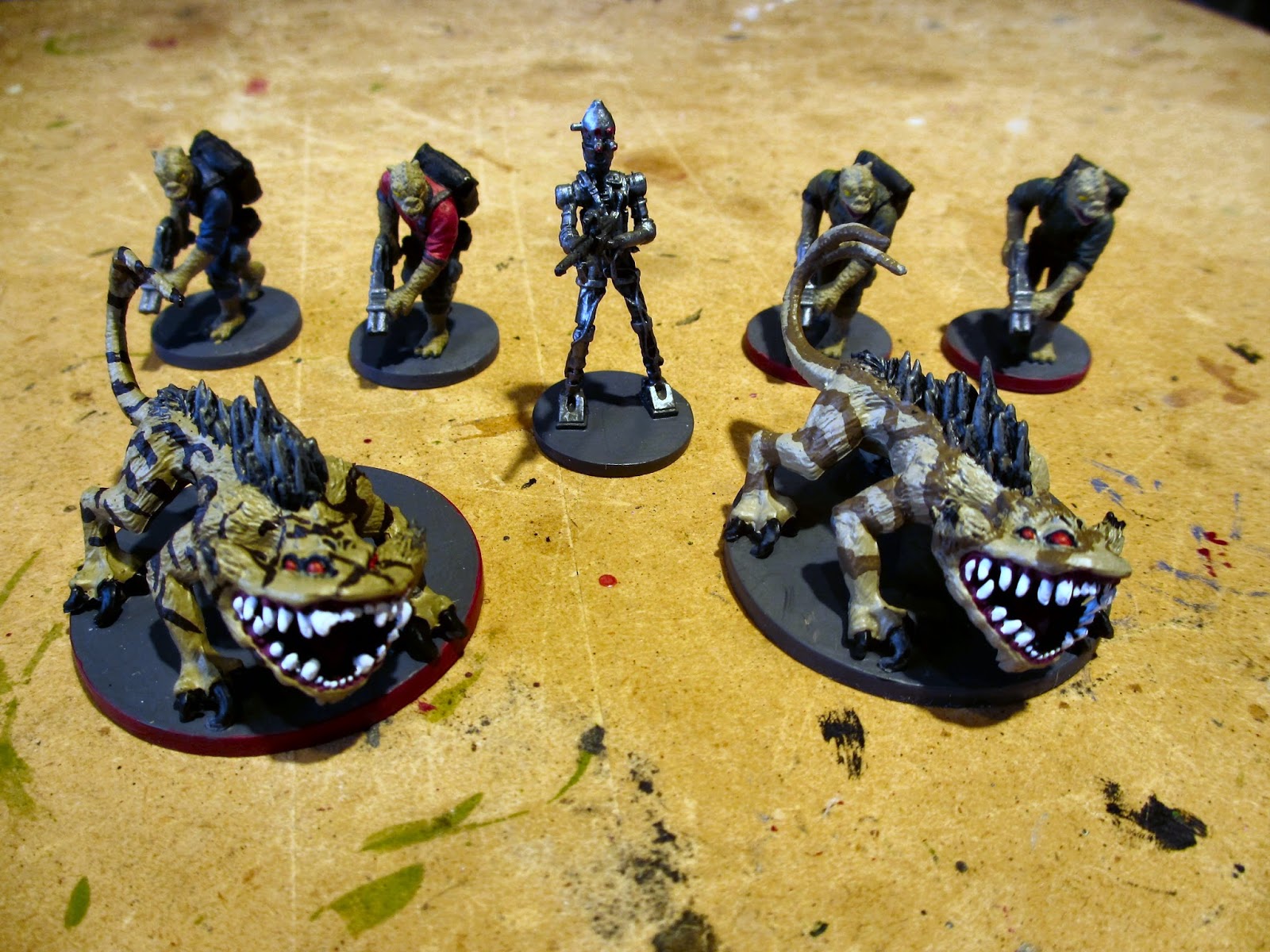 The bases gave me some pause. I have seen people do some amazing textures, but the downside to that is they can only match one of the three terrain types that are on the mapboards. So I went a dark grey, and it works great to making the bases functionally invisible. I put red or blue rings around some of the units to tell different deployment groups apart and done! When the weather gets a bit warmer I will seal them.

Having painted figures on the nice printed mapboards gives the game a great finished feel and adds a lot to the immersion of the game. 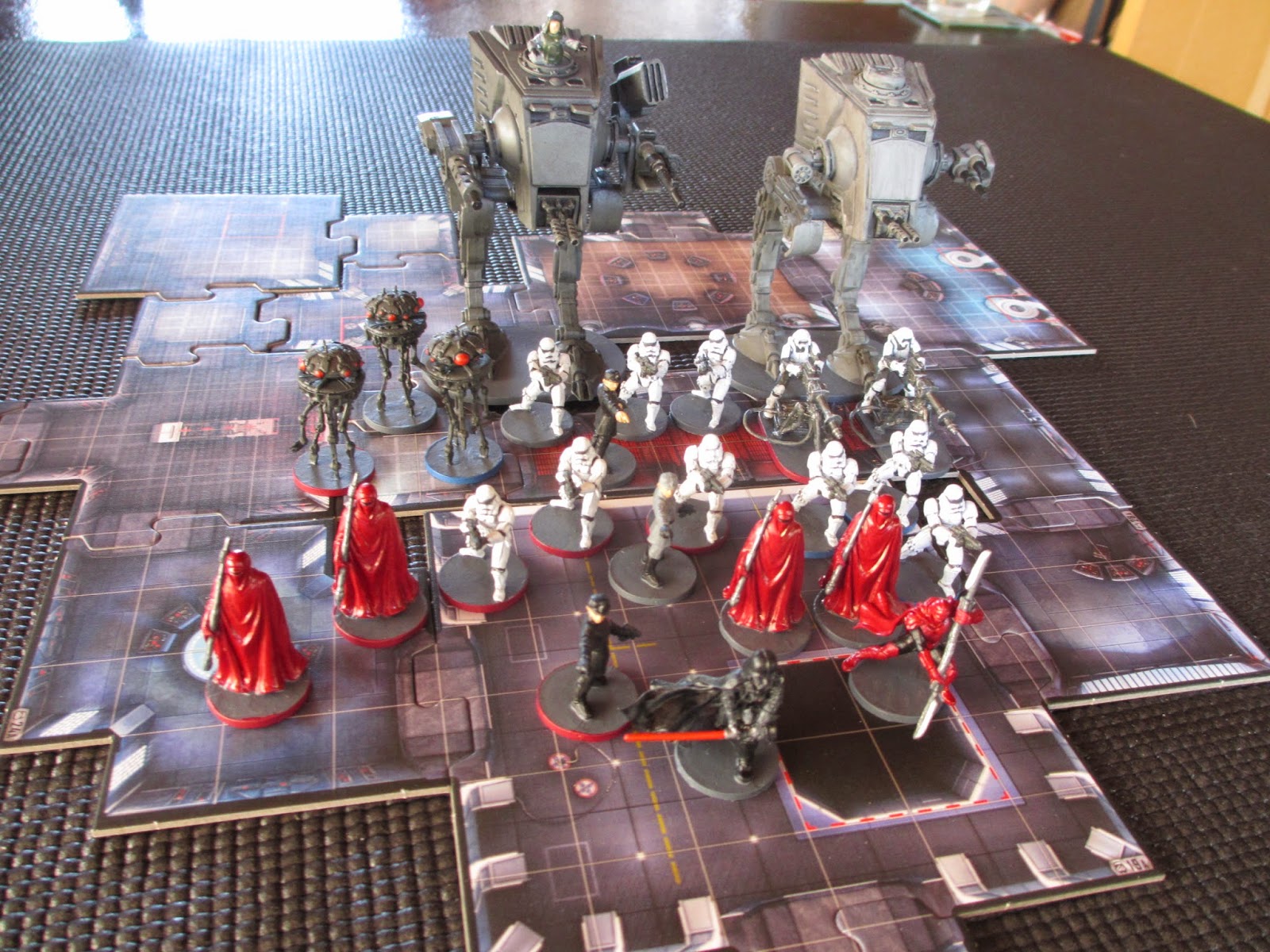 Next up, I'll yammer about how this game plays.


Go Roll Some Dice
And do a little painting
Posted by Marcus the Blackheart at 10:41 AM 2 comments: 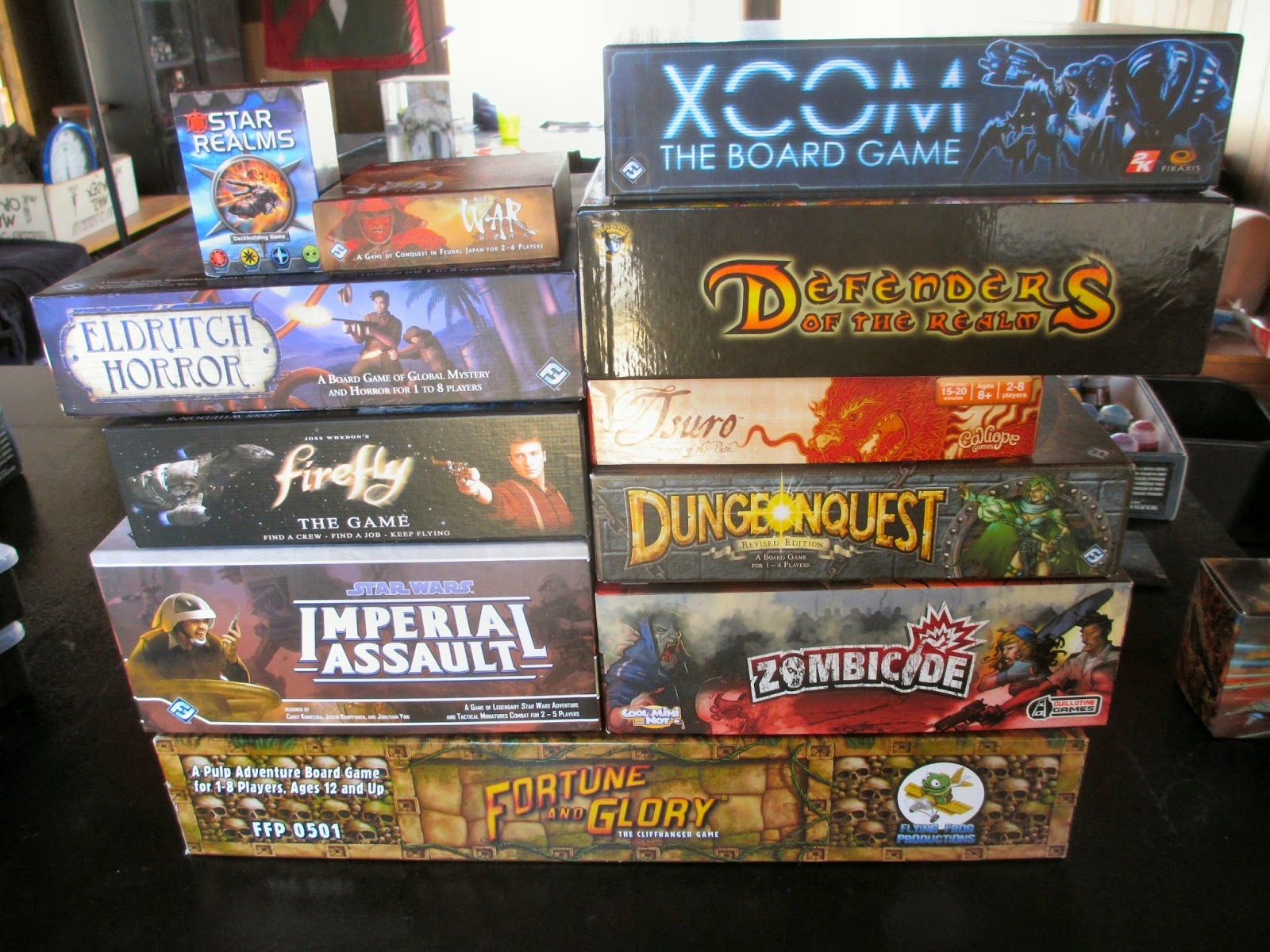 Get out there and enjoy Tabletop day! Gamers are truly living in a golden age for board games. So many great games with top notch components and fantastic art, we are absolutely spoiled for choices.

We will only have time today for one, maybe two games  today, but tomorrow is Imperial Assault all day!

Standby for a review and a battle report.

Posted by Marcus the Blackheart at 2:00 PM No comments: 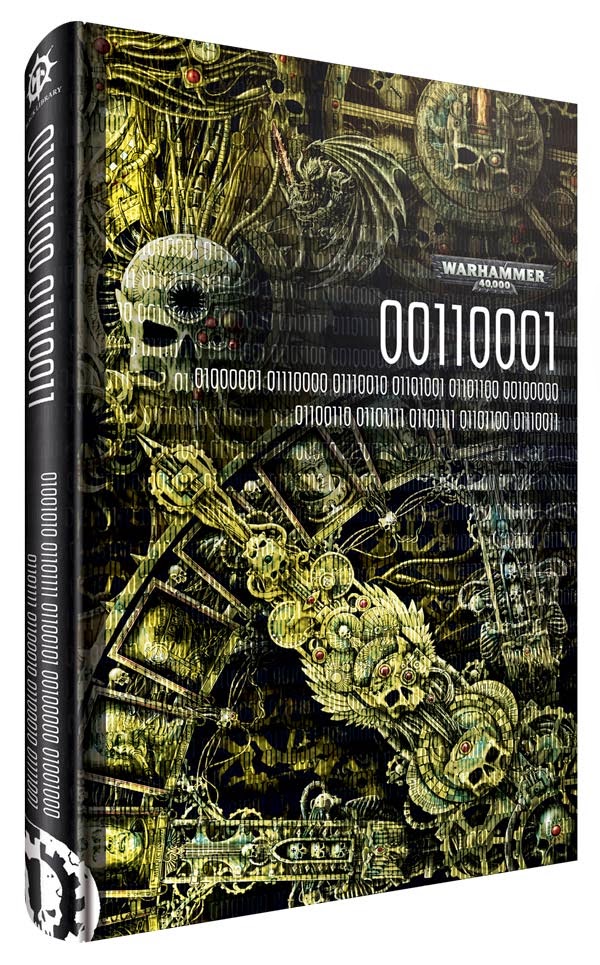 
TO MARK THE MOMENTOUS RELEASE OF THE NEW ADEPTUS MECHANICUS WARHAMMER 40,000 ARMY, WE'VE RELEASED A NEW NOVEL ENTIRELY IN THE OMNISSIAH-APPROVED LANGUAGE OF BINARY!

THIS BRAND NEW, AND ENTIRELY NOT MADE-UP BOOK, FOLLOWS THE ADVENTURES OF A YOUNG SERVITOR WHO DREAMS OF BEING A SKITARII WARRIOR. UNLIKE MOST OF OUR NOVELS, THIS STORY IS WRITTEN FOR, AND BY, A COMPUTER. OF COURSE,  BINARY CAN BE A LITTLE TRICKY AT FIRST, BUT BY THE 5TH OR 6TH CHAPTER WE THINK YOU'LL HARDLY NOTICE.

00110001 IS AVAILABLE AS BOTH AS A HARDBACK, AND OF COURSE, AS A DIGITALLY  EBOOK EDITION