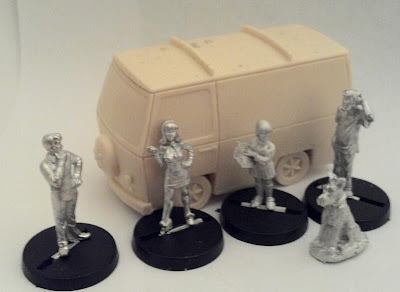 I am so temped to make this the core of a Inquisitorial squad. But who is the Inquisitor? Fred? Velma? Or all they just Daphne's pawns?

Mystery Machine: Rhino or Chimera? I'm leaning towards Rhino. I can see a pair of storm bolters on top, and maybe a H/K missile mount towards the rear. Just thinking...
Posted by Marcus the Blackheart at 12:00 PM 3 comments:

After a first round bye I was eager to see what my newly painted Orks could do. My army is a classic hammer&anvil force. Bikers, turkk boys, and the Warboss and nineteen of his closest friends in a Battlewagon provide the hammer, while lootas, a pair of Deff Dreds, and a 30 strong mob of shoota boys push the line forward. Sounds great in theory. Jeff's totally mobile Dark Eldar had a different opinion. 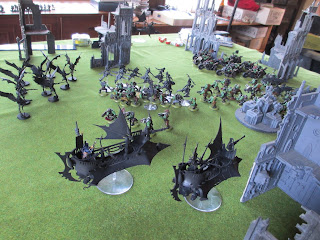 Like most battle plans it turned in to a big hand to hand mess in the center of the table. The Dark Eldar must have spent too much time at the party pits the night before because their dice rolling was terrible. The new paint job on the Lootas somehow drastically improved their aim. Raiders, Reavers, and a entire squad of warriors fell to the deffguns. In the end it was a massacre in favor of the Orks.

And on the other table: 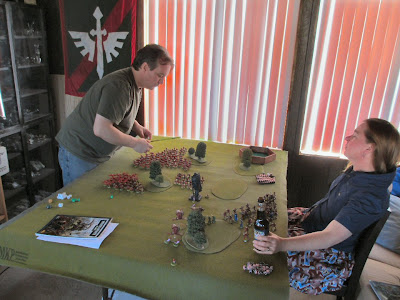 The Hive mind slammed into the Eldar lines like a living tidal wave. The scenario worked against Mrs. Blackheart, as a fair portion of her army showed up late to the party. Pete's army lost a bit of focus and failed to finish off the beleaguered Eldar. 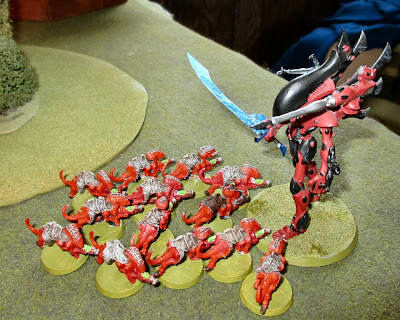 Pete achieved a minor victory due the game coming to a halt on turn five, had it run more turn there may have not been any of the Craftworld's forces left on the table.

Next battles will see the rampaging Orks versus the Eldar, and Tau firepower against the Tyranid horde.