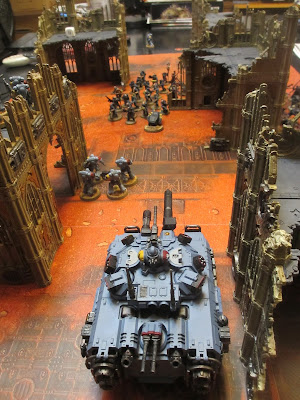 Space Wolves vs. Genestealer Cult. This time I brought a tank! A bit bit risky to bring a 19 PR unit in a 50 PR game...but so worth it. 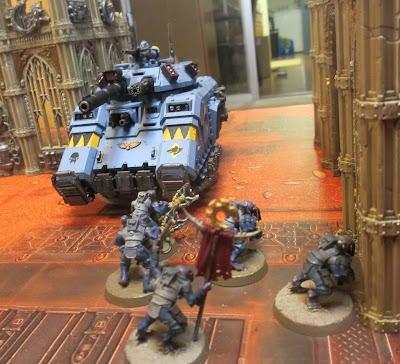 The Executioner's firepower is most impressive, but those damn cultists and their power tools still managed to do some harm to my fancy floating panzer. 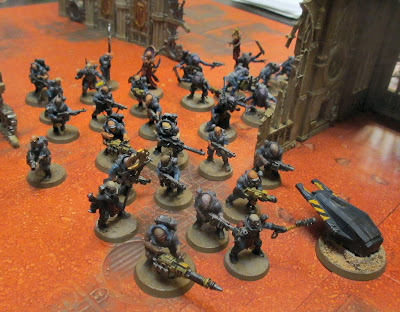 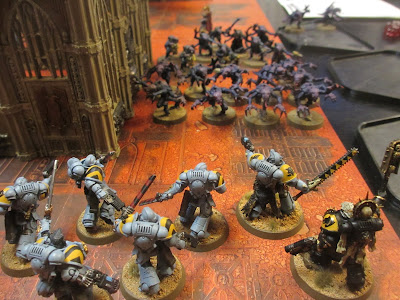 My new command platoon worked as well has I had hoped. Shooting is really great, but sometimes you just gotta get right close and personal. Even the Genestealers agree with me. Well, they did until they all died. 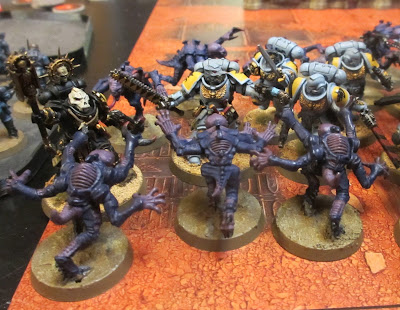 A fast paced slugfest that I almost lost because I forgot what the objective was.
Go Roll Some Dice
Just Remember the Briefing

Posted by Marcus the Blackheart at 11:01 AM No comments:

Another Glorious Day in the Corps 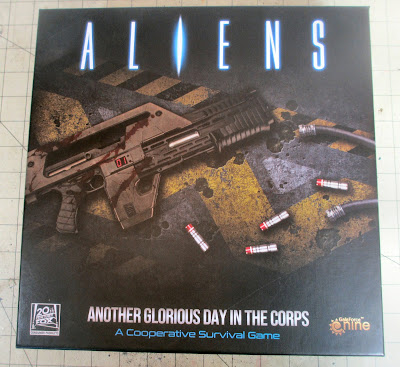 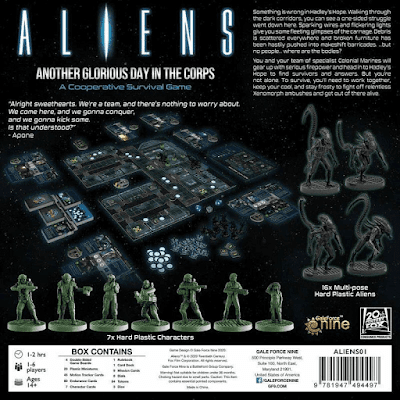 Aliens. One of the most iconic and beloved sci-fi films. I must have seen it a dozen times when it was in came out in the theatres. There have been a few attempts at board/minis games, the first one, Aliens: This Time it's War (Leading Edge 1989) was the best. Simple(not easy) and fast playing, it really captured the action of the film. The less we speak of Prodos AVP: The Hunt Begins, the better.
Now it is Gale Force Nine's turn. They have done a couple of good games based on licensed properties to their credit. We really enjoyed Firefly The Game (clever title...).  Aliens Another Glorious Day in the Corps was announced a few years ago, and has popped off and on the radar since. Release day got pushed back several times...but it is finally here. Today let's have a look inside the box.
The base game (I'll talk about the expansions in a latter post) comes with rules, counters, dice, lots of cards, and four very nice doubled sided game boards. And of course what I will be focusing on, the miniatures. Inside the box are seven Marine characters and sixteen Alien Warriors all in multi-part hard plastic. The Hero types in green, the Xenos in black.
These miniature come on a sprue, so you must clip, clean and assemble with glue. The Heroes go together very well, a couple of the heads were a bit fiddly, but no real issue if you are a little careful. The Heroes are all mono pose, but they are all are doing something different and look purposeful.
The Alien Warriors can be made to have some small variations in their poses. They also go together well...until you put the tails on. Oh, the tails are a bad design. Very small contact point, and not a good connection point at that. Be prepared for a bit of frustration.
The detail on the figs are good, if a little on the soft side. I really like that the Heroes have their names in raised letter on the bases. 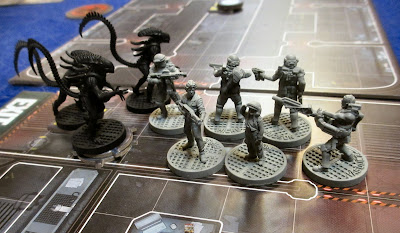 I assembled and primed the minis, and we had a stumble through of the first mission.
The rulebook is fairly straightforward, but some of the rules are in weird places, and could have used a better reference section. I was expecting something along the lines of Space Hulk, but the gameplay is a little deeper than that, which I will get into on my next post.
How many drops is this for you, Lieutenant?
If we count the Role Playing Games, Six

Posted by Marcus the Blackheart at 12:53 PM No comments: 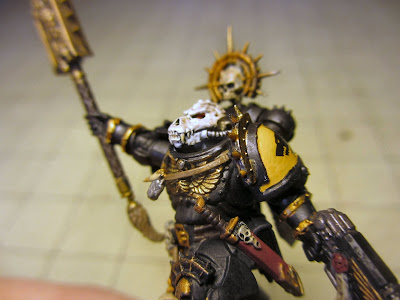 It took me a while, but I figured out how I was going to make a Primaris Wolf Priest. After all the (insane) ideas I had come up with, this turned out to be fairly straightforward. I used the Chaplain from the Indomitus box set as the starting point, and 'simply' added some Space Wolf bling. I'm not sure Wolf Priests are required to have Wolf Skull helmets, but I do love how they look. 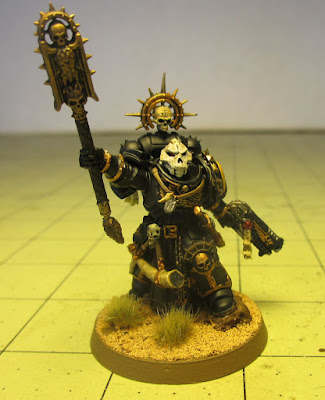 The Drinking Horn is full of "Healing" elixirs...
I am very pleased with how he came out, and can't wait to unleash him on the battlefield.

Next Up: They mostly come out at night. Mostly.

For Russ and The Allfather!

Posted by Marcus the Blackheart at 2:28 PM No comments: