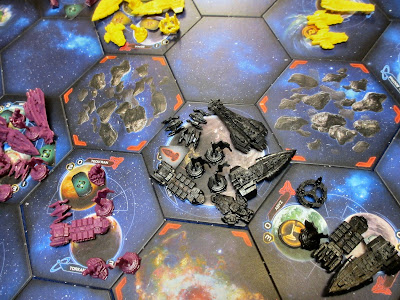 Twilight Imperium. The very name conjures up emotions from people who know what it is. Love or fear, it depends on what kind of game you enjoy, and what kind of experiences you may have had with this monster of a game in the past.

The fourth edition of this epic space game of expansion, conflict, and diplomacy was released late last year, coming a mere thirteen years since the third edition. It is a refinement, rather than a re-do. All the art is new and awesome, the plastic spaceships are much nicer (and you don't have to cut them off the sprue this time!), the player aids are better, the box is a bit smaller with a really useful insert, and the rules themselves are much cleaner.

I didn't play a lot of 3rd (we did play a bunch of 1st & 2nd) and I think that is because it was just a bit too fiddly. It was very close, but not quite, so it saw the table once every couple of years.

When it was announced a new version was imminent, my interest piqued in it again. I read the new rules and decided to dive back into the world of Twilight Imperium. I roped in two friends who have never played before, along with Mrs. Blackheart (who was not really of fan of 3rd) and gave it a go. 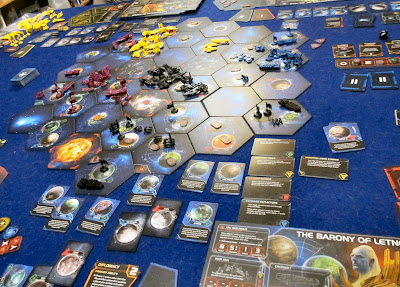 The game takes up a lot of table space, but it all makes sense after the kinda steep learning curve. It is not a hard to game to learn, but there are a lot of moving parts to it. After two rocky turns we all got a good feeling of what we should be doing and the game flowed well. It took just over six hours (with lunch) which not bad for the first time out. It plays very well with four players, I am interested to try it with six. 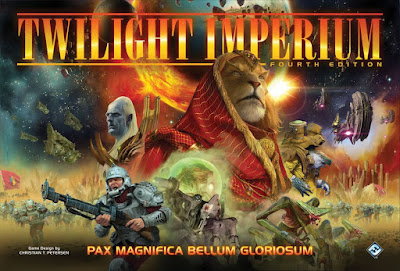 The universe of Twilight Imperium has great depth and a history well thought out.  The game comes with 17 different races to choose from, all with unique backstories.

If you like big sci-fi, and a bit of weight to your rules, you should check it out.
It is still not something you can just pop out on the table for a quick game, but it is well worth the investment in time and effort to set up a game with a few like-minded players.


Go Roll Some Dice
And Play Nice With the Space Kitties 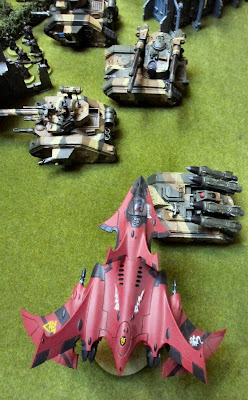 The WInter League has wrapped up Round one, and now the battles get bigger. The Guard has done very well with the new paint job and stands at 3-0. Next up the Eldar are 2-1, Tyranids 1-2, and the Marines got shut out.

We decided to play the same mission for all Round Two battles, (as can be seen over there on the right >) The Power Level has risen to 75 and Flyers are now allowed. We are using the special flyer rules from the Skies of Death section of the Main Rulebook.

Mrs.Blackheart and I got our battle done yesterday, and it was a close one. If it wasn't for some truly amazingly good rolls from my Hydra, I probally would not have prevailed. It was a damn close match until turn three when the dice turned against the Eldar. 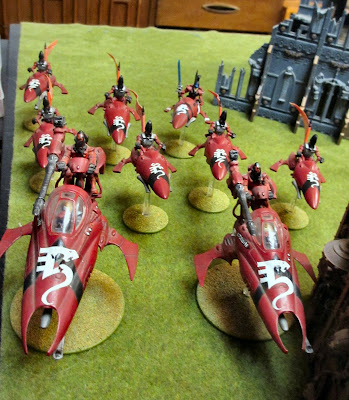 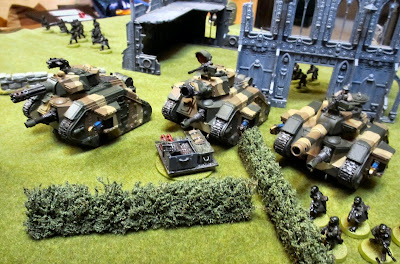 Will the Marines stage a comeback? How scary will the Hive Mind be? Can the Guard be stopped? Can anyone stand up to the Psychic mastery of the Eldar? Stay tuned!


Go Roll Them Bones
And Don't Forget Your Command Points

This Year, I Really Mean it 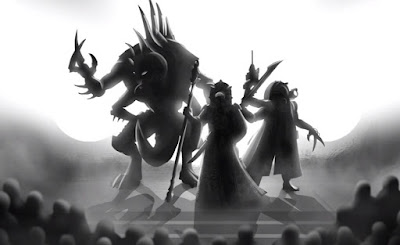 Welcome to 2018! Nothing quite like the irrational feeling of starting a new year with a fresh slate, full of enthusiasm of what you will get done. It is a good thing! If we were not able to pick a random point in time and say, "No, from this point forward I will focus on X," a lot less would actually get done. Face it, humans are weird.

Speaking of getting things done, Great things are planned for the Warlords this year! (some may even be accomplished) I have made a list of armies to be re-done/finished for the next few months just so I can keep a bit of project focus and crank them out. I find this really helps on the days I am not super motivated to paint. (most days).

On the gaming side of things, the Winter League is going along fine, there will be a sitrep on Friday. The delayed Up From Under, Genestealer Cult Campaign will start after the League wraps up in Late February.

We have a bit of a backlog of board games to try out and report on as well as the New Necromunda. Last year was a low number of posts, I will do my best to increase that but a bit with more less formal posts, but I won't drop down to the level of talking about what I had for lunch.

I hope to make 2018 a great year so please come along for the ride.


The Emperor Has Given You Another Year
Use It Well