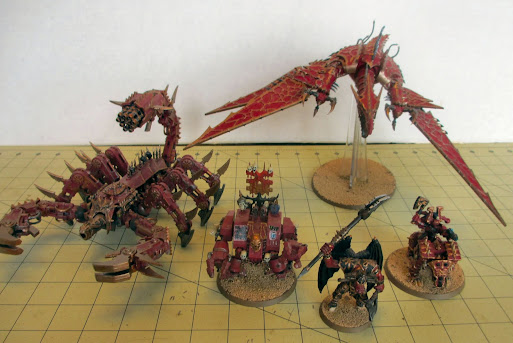 As any army grows over time, and especially over editions, some units become less useful or just left behind altogether. Here we see my Forlorn Five, units that where red hot back in day, but now rarely see the tabletop. 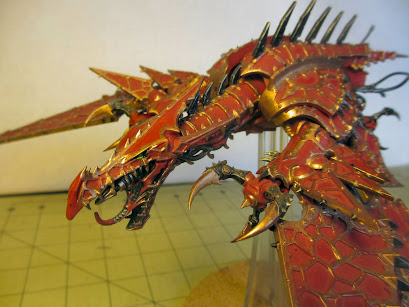 The Heldrake (I think) looks cool, and it is okay-ish on the field, but just not worth the points anymore. I'll give it a go in 9th just for fun, and maybe it will surprise me or better yet, my opponent.

Fresh from Apocalypse (2007) it's the Brass Scorpion! 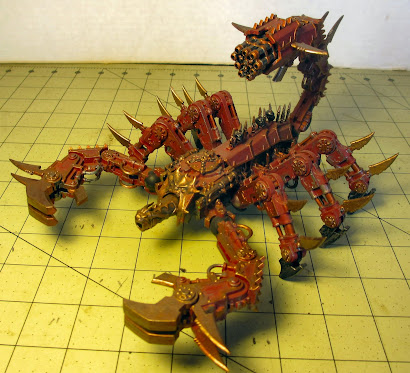 A challenging kitbash, but very cool indeed. It will have its own post soon, with yet more new homemade rules! 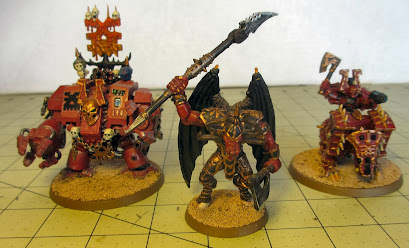 Speaking of house rules, I will make some new ones for Krogor the Bloodmad as well. He is a fun Dreadnought, or whatever they Chaosy version is called today. Also works as a standard Helbrute. Yes, I looked it up.
Koldan, Lord on Juggernaut, does have rules (Legends)  but has always struggled to find a place in the army. Maybe he will be the Daemon liaison officer? He is a very early '90s figure but I still like him.
Daemon Prince Kylar. Actually good on the field, just doesn't show up that often. I am thinking of redoing him with a fancy new plastic model. Then he will have the imposing stature a Daemon Prince should have.
Next up: Space Wolves
Blood For the Blood God!
Even Old Timers Have a Quota 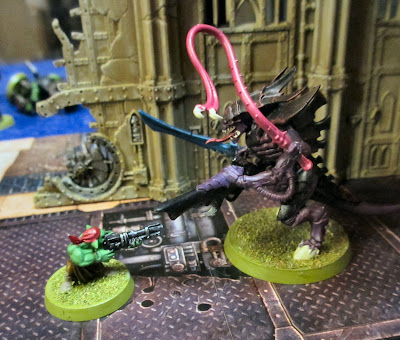 The Combat Patrol missions for 9th Edition have turned out to be quite entertaining. Quick battles let you pick some fun army lists that you may not normally have tried.
We did a Ork vs Tyranid battle. Mrs Blackheart's force had a Warboss, 5 Nobz, 20 Ladz, 10 Grot, and a Dred. I brought a Warrior Prime, nine Warriors and six Raveners. 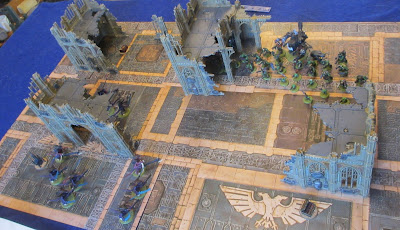 The small map makes for fast engagements! In a surprise to all, the Warriors shot up the Dred on the first turn. Venom cannons are your friend.
On turn Two my Six Raveners arrived and made the charge into the Nobz. It went quite badly for me. I only killed one Nob, and the Warboss made her Heroic Intervention, and poof! No more Raveners. Damn Power Klaws...
We had two more turns of carnage, the battle flowed back and forth with the victory points staying close. At the end of turn four it came down to my Warrior Prime, her injured Warboss and the last Nobz in a fight for a objective that would determine the outcome of the game. 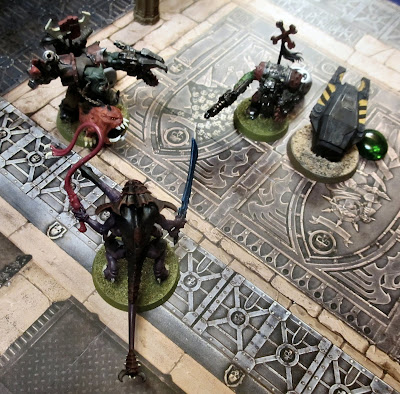 I had the charge and killed the Nobz, but left a wound on the Warboss. The Warboss hit well but did terrible on the damage rolls. Next turn, (Top of Five, the last turn) she attacked first and the poor Warboss had no fight left in it, zero hits, even with a command re-roll. The Prime put the Warboss out its misery for the win!
A exciting, very close game. I feel that we will play some 100PL games, a lot of the games will be Combat Patrol.
Next: More World Eaters
The Great Devourer Hungers
They Like to Eat Their Greens