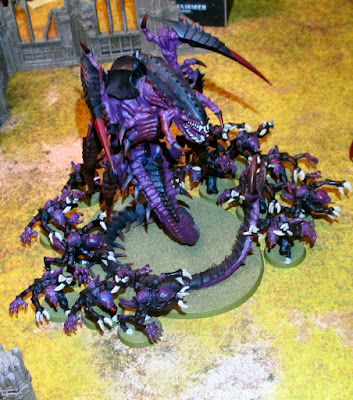 Fun fact: 15 Genestealers can fit if they deploy with a Trygon. Well, it's not that fun if you are the one facing them, and there are two such groups, and nine Raveners.
It went poorly for the Guard. 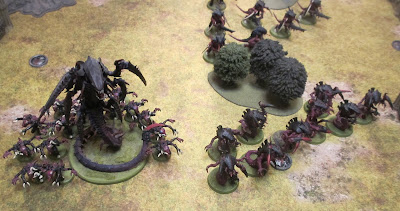 100PL battle, Tyranids vs Imperial Guard with a Deathwatch Squad. Tyranids went first, and the Guard never found their footing. Not to mention the worst Overwatch rolling I have made in a long time. Even with the Strategy card that lets me hit on a 5+. 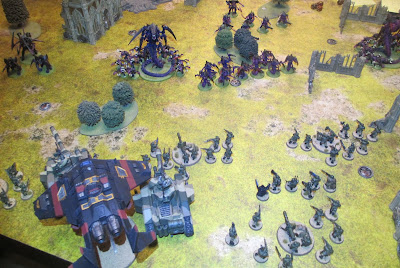 It just wasn't the Cadian's day. Mrs. Blackheart made some great chrage rolls and the 'Nids were disregarding Social Distancing in no time. 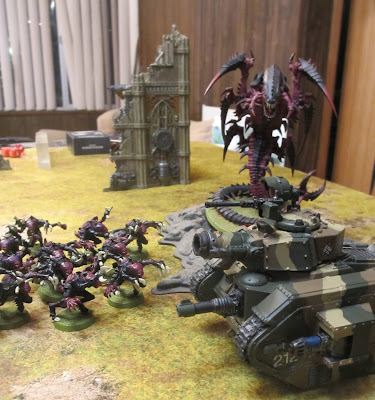 'Stealers aren't that good against tanks anymore, but if they can arrive in close combat with 10+ models...that's a lot of dice, and usually enough sixes to do some damage. 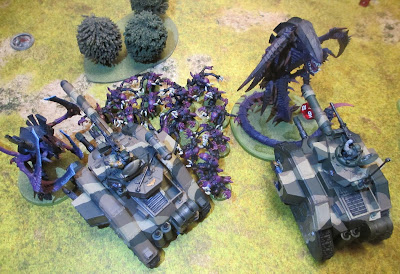 The Swarmlord didn't take a scratch on her way into my tanks. Deathwatch killed everything they shot at, but were only one squad and a Gunship, and it was not enough.
We were playing with Tactical Objectives, and at the end of turn three it was Tyranids:7 Guard:0.
Even though I lost bad, it was a fast, fun game. Next time I will manage my deployment better...


The Hive Mind Hungers
This Was a Good Snack Though

Posted by Marcus the Blackheart at 12:15 PM 2 comments:

World Eaters Wednesday for May 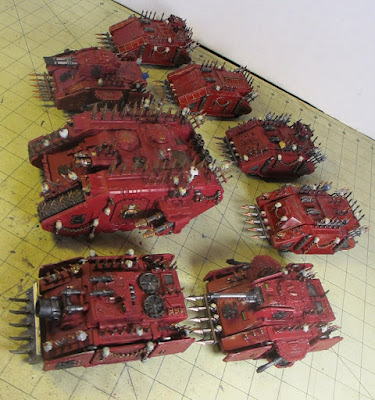 Armored might. It's not all about Chainaxes (It totally is) Some days you have to kill other armored fighting vehicles and/or monsters at range. Or you would like to get across the field faster than running. Or maybe I just like tanks. Blood colored ones with spikes and skulls are clearly the best kind. 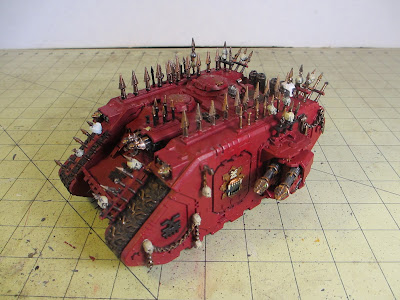 In the beginning, there was Kristine. I wanted a Land Raider to be the center point of my growing World Eaters army. I had tried to find the older plastic kit, but they were not available anymore and this was the dark ages of the internets. The one I did have was already painted in Dark Angels green. So, I had to wait a few years for the brand-new Land Raider. It was worth it. 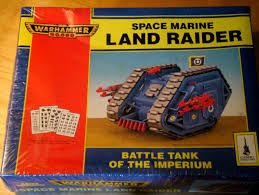 She has been upgraded a few times over the years: a few more skulls, metal Khorn icons, resin Forge world doors, more spike and skulls, paint touch-ups, and a few more skulls. Now that we can put different units in a transport, I normally take a 5-man squad of Berzerkers plus my three HQs to make the unholy number Eight, just for fun. 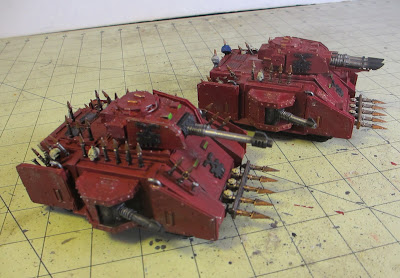 Waaay back when GW had Games Day, I picked up some metal extra armor packages for Predator/Rhino tanks. The two Predators and the Vindicator are mostly metal, and indeed very heavy. 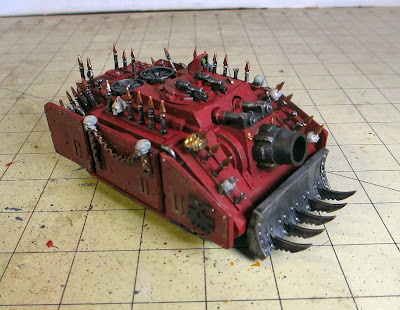 Which brings us to the Rhinos. The fastest way to get forty crazed butchers to the enemy.
I had painted up three for the World Eaters, but just added a fourth one out of leftover parts. 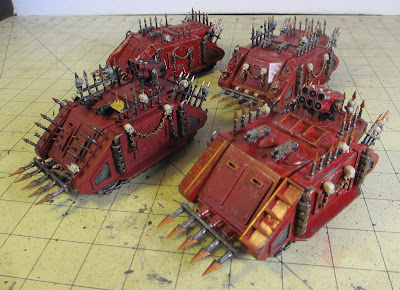 This armored battlegroup forms the core of my World Eaters army. It suits my style of play very well, I don't always win, but I do have a good time with this force.
Next month on WEW, Daemon Engines and other stuff.


Blood for The Blood God
Lascannons too

Posted by Marcus the Blackheart at 1:24 PM 2 comments: