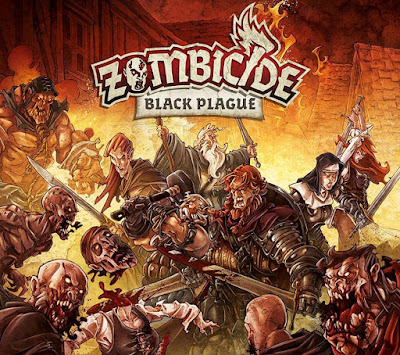 The Zombie producing machine that is Guillotine Games/Cool Mini-or-Not just keeps on rolling. This time they take us to a gritter time of no running water or Wi-Fi. Wait, that would be any zombie apocalypse. Is this one just a reskin with swords and such?

Yes, but with enough improvements to make it worth you time. Or if you just prefer the Medieval Fantasy theme.

At its dead heart, Zombicide Black Plague (ZBP from now on) is pretty much your baseline Zombicide. You wander around the map looking for better weapons and gear, kill a bunch of zombies, and achieve the missions goals. Or die trying. Still a fast moving, fun game for 1-6 players. 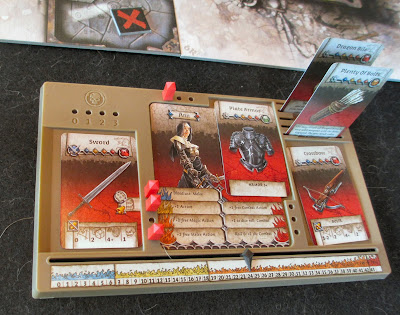 What ZBP does better than the first versions is pretty much everything, just in small amounts. The new plastic player trays are fantastic and make keeping all your stuff and stats easily accessible. Plus, they have added a body slot to put armor or some gear. The color coded plastic rings to go around your player mini was a good idea, instead of trying to figure out whose figure was light aqua, and whose was seafoam. 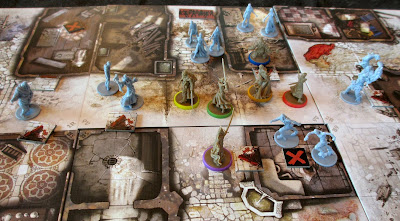 The rules have been cleaned up a little bit, but still could have benefitted from an editing pass, some of the wording is clunky, but still understandable after a read or three.

The Zombvivors are gone, which I feel is for the best, I was never a fan of the way they were implemented. It is much easier to heal your characters now, so player eliminations will not be as frequent. The Necromancer is a nice addition as a bad guy, but I kinda wanted it as a "boss monster" rather than a special wandering monster. Still adds nice flavor, they just show up too often. 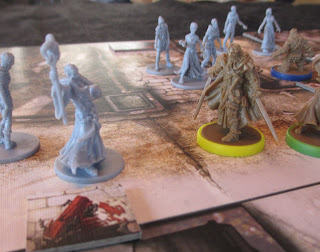 The miniatures themselves are very nice sculpts, with a good variety of poses for the undead. I was a little let down in the lack of variation in the weapons, but I guess there is only so much they felt like doing. One weapon's stats in particular, The Great Sword, makes no sense to us, so we will work out some kind of house rule for it. 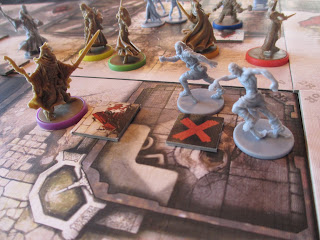 There are magic spells in the game, but anyone can use them, which is good from a game standpoint, but a bit jarring from a typical fantasy setting. "Oh sure, we all use magic, it's easy!" I guess to be in the Fantasy Hero Union you have to get qualified on spell usage.

There is a tidal wave of expansions coming for this game, we got in on the Kickstarter, so an nearly unusable number of new heroes and cards will be here soon as well as the first expansion which adds werewolves. That is the big question for us: How many fantasy monsters are they going to add? How fast will it make the game an overencumbered mess? Maybe they will keep things separated: Zombie missions, Werewolf missions, Troll missions, etc.  I hope so, or it will turn into too much of a good thing like the original Zombicide did if you weren't very careful.

All in all, I recommend it. It is a fun co-op zombie slaying game with swords and spells.
Eight decapitations out ten.


Go Roll Some Dice
And Chop up some Undead


Posted by Marcus the Blackheart at 2:11 PM No comments: 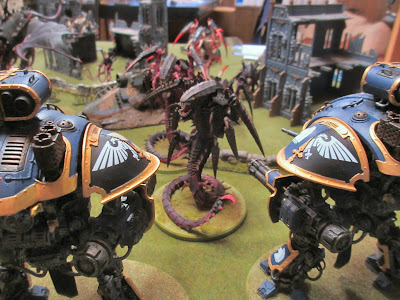 Knights and Imperial Guard make a valiant last stand against the swarms of the Hive mind.
2500 point battle using the Tyranid Attack mission from last post. What a slugfest it was. It was one of those games that came down to the wire and could have easily gone either way. 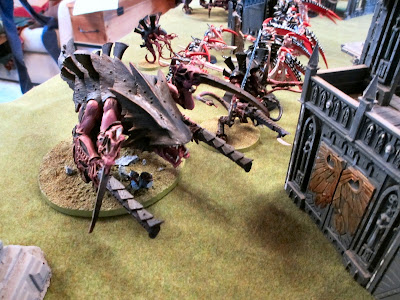 I took my standard Baronial Court of four Knights, and rounded off my army with a large platoon of Steel Legion Guardsmen. The Tyranid players brought a whole lot of heavies including the Barbed Hierodule, eight Carnifex, and three Tygons, plus much more. I had my work cut out for me. Good thing I brought a lot of big guns. 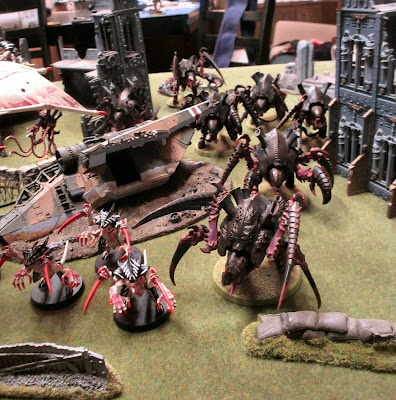 Mrs. Blackheart focused on the Guardsmen until they were all Ripper chow. My Knight Paladin took a pounding from the Hierodule's mighty Bio-cannons and exploded. The Baron's Ion shield worked much better than it should have and saved him from certain death a few times. 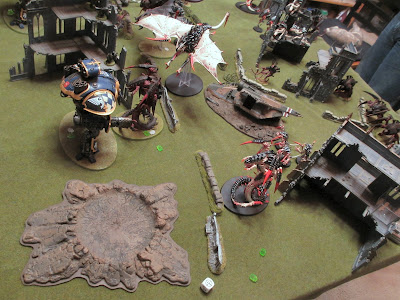 The Tygons arrived en mass and got into it with the Errant and Crusader. I killed three of them in hand to hand, but ultimately was torn apart.

Fun Tip: Don't stand right next to something that might explode with a "D"...

The Baron was the last man standing for a while, but his shields could not hold out indefinitely and he was felled by the Hierodule at the end of tun five. So close! 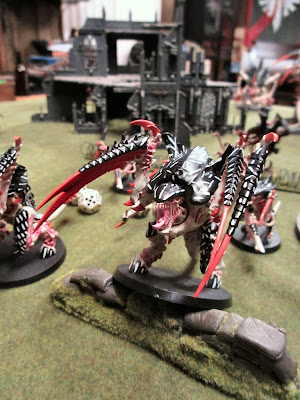 I really like this mission, it has a cinematic quality to it. The endless stream of Tyranids, the relentless pressure to kill and survive just one more turn, it makes for a great gaming experience. Give it a try and let me know what you think. 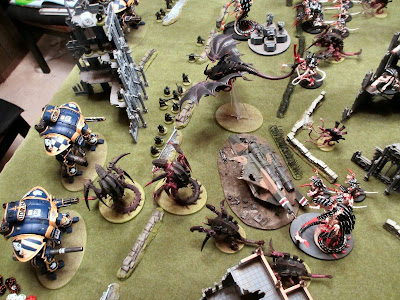 Next: Zombicide goes back in time!


It's Okay, the Hive is really into Recycling
Really Gross, Sticky Recycling