﻿ ﻿ Lead by the armored spearhead of the Armageddon 23rd Steel Legion a combined Imperial force rapidly re-took territory lost to the Tyranid invaders. It was of course a trap. An unprecedented swarm of Tyranid monstrous creatures surged out of the city ruins and headlong into the Guard. Massed fire from a Lemen Russ company lead by a pair of super-heavies tore into the massed 'Nids. Very accurate fire rained down from a supporting battery of Catachan Manticores. Scores of lesser Tyranids were incenerated. 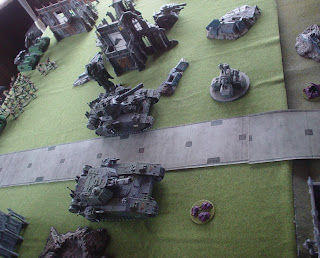 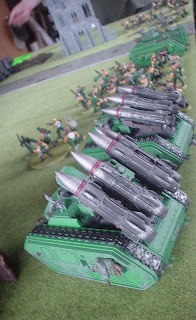 ﻿Then the Trygons, Lictors, and a Mawloc showed up. The Barbed Hierodule shot up the Baneblade and destroyed the Stormsword. It was a pitched back and forth battle, but in the end, the Guard ran out of tanks before the 'Nids ran out of Carnifexes, and that thrice-dammed Hierodule.
We played the "Rolling Thunder" mission from the Imperial Armour Apocalypse II book. 50% of each army must be tanks, monstrous creatures, super heavies and the like. Our game had 5000 points per side. The game flowed very well and moved fast for a large battle.
﻿
Both sides took heavy losses﻿, the Tyranids won, but not by much. The next mission will be a clash of scouting forces looking for a weak point in the enemy lines.
Tyranids 6, Imperium 5.

Posted by Marcus the Blackheart at 7:07 PM 2 comments: