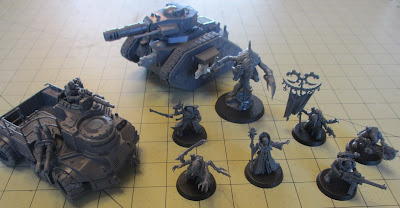 The Atomic Warlords Summer Campaign can be revealed at last! In typical overambitious fashion I am building/painting four new factions, a bunch of terrain, and one brand new army for the summer madness.

Starting in May we shall start Out From Under, a twelve mission escalating, semi-narrative campaign dealing with the Genestealer Cult uprising on Zircon IV. The Cult will have small skirmishes to large battles against: Rival Hive Gangs, Enforcers, Sisters of Battle, P.D.F., Inquisition, and Deathwatch.  All fighting will be done in cramped city environments.

Stay tuned for posts on constructing the forces, battle reports, fiction, and the flow of the grand campaign. It should be a good time for all.

Storm King vs a Lot of Tanks 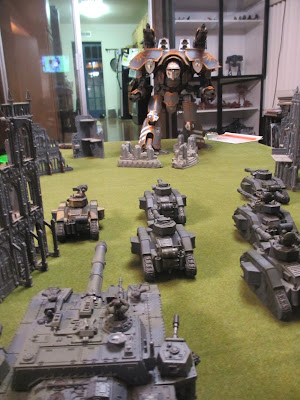 Finally time to put my shiny new Titan on the table. One lone Warlord Titan (2,750 points) versus a full Emperor's Fist Tank company of ten Leman Russ Vanquishers, a Baneblade, and two Shadowswords (3,100 pts. A few stand-ins for the Guard) 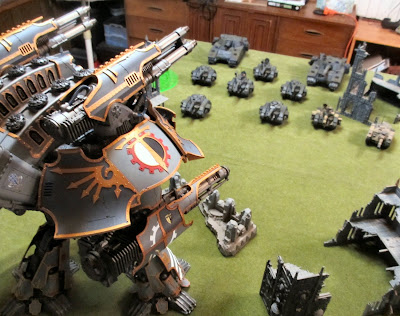 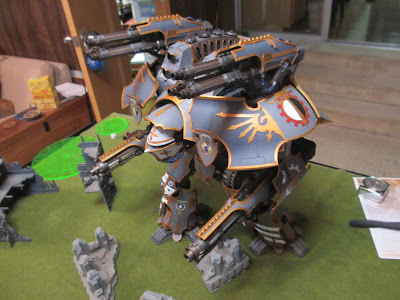 Then Tempestus Rex shot back. The Shadowswords were clearly the biggest threat and each got erased by a triple turbo laser battery. The Baneblade and a Vanquisher were taken out by a single Volcano blast, and the formation HQ tank plus a two of his friends by the second Volcano Cannon shot. 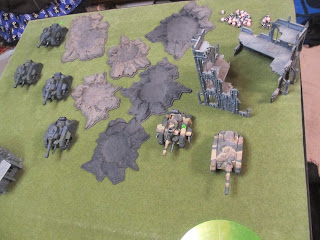 Three superheavies and four Vanquishers. Not a bad turn of shooting. And I got two Void Shields back.

The six remaining Vanquishers (now hitting on 4+ due to the loss of the HQ) Took down the Voids and did 3 more HP. Then they died. 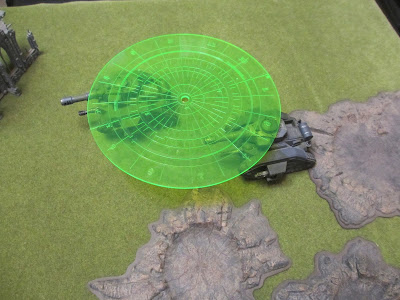 A swift two turn bloodbath. With thirteen vehicles the tank force only did 50% damage to the Titan. The tanks had the added advantage of going first, and starting within lascannon weapons range. The Warlord's guns have a huge range advantage, if we had started any further apart it would have been even more lopsided. The plan was for the Vanquishers to close and use the sponson mounted Multi-Meltas to great effect. That didn't come close to happening.

No big surprise that the Warlord Titan is a nigh unstoppable machine of destruction, and doesn't really belong in a 40K scaled game. But it is so much damn fun!


The Emperor Protects
But Size Does Matter
Posted by Marcus the Blackheart at 12:08 PM 3 comments: