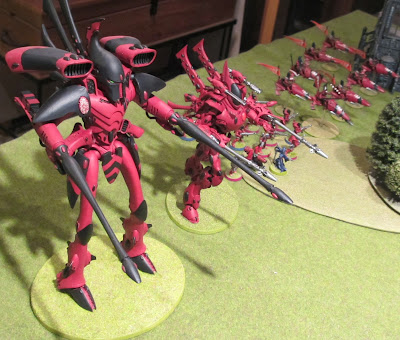 As promised the Revenant Escalation battle report. 2,000 points each, I did not take any Super heavies, merely six Leman Russ Battle Tanks plus lots of Guardsmen with lascannons and missile launchers.  Mrs. Blackheart got a few models after the 900 point "Scout" Titan. We rolled up mission #5, Ultimate Linebreaker. Tragically for me she got go first and I didn't seize the initiative even with the +1 to my roll for not having my own super heavy. 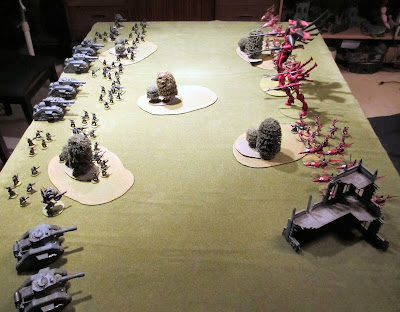 The Pulsars worked as advertised, three dead guard tanks. The Wraithknight pitched in a took out another. Even in my reduced state I did five hull points of damage to the Revenant on my turn. 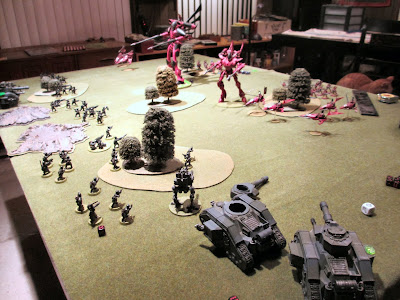 Then I started to run out of units. The Eldar Titan continued its rampage erasing a Leman Russ and a Guard Squad in the shooting phase and another Guard squad in the assault phase, although a valiant plasma gunner did one more hull point damage on overwatch before being crushed. The Wraithknight failed to even glance the last Leman Russ, maybe setting me up for a dramatic big finish? 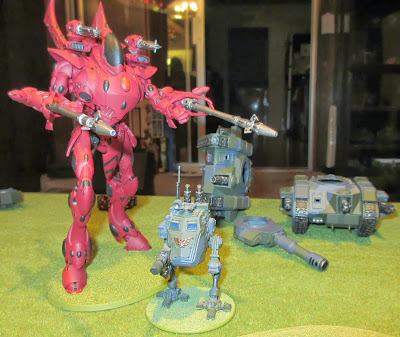 Em, no. I was finished alright. I had enough shots to bring down the Revenant, but the Guard came up two hits short. And the Wraithknight was still undamaged and now tearing though my lines. Not to mention the Autarch and his jerk jetbike buddies. 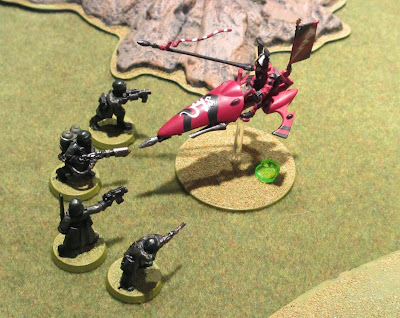 After four brutal rounds it was over for the Guard. The game was called and the final score was 10-5, Eldar.
And the big question is: Is the Revenant too powerful for "normal" 40K games? Yeah, it kind of is. It would be a bad shock to fight one flat-footed, it will maul a balanced army to be sure and a heavy anti-tank army would have its hands full. It has the firepower of the Gods, and is rather hard to hit with its Titan Holofield shenanigans. I think it is underpriced at 900 points, 1200 seems more like it to me. 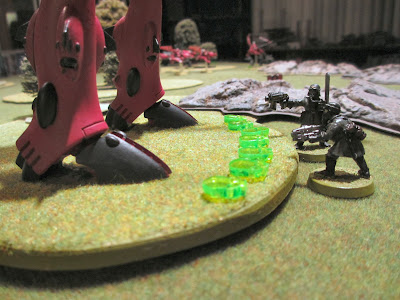 Was it fun? Hell yes. The new supplements really open up the options for 40K games. I love the epic feel the game takes on when you add a super heavy or two. That being said, I do think using Escalation, Stronghold, and even Allies should be agreed upon beforehand.

Now all I want to do is kill the Revenant. Maybe a Tau list will do the trick...


The Emperor Protects
He says to get more guns

Posted by Marcus the Blackheart at 6:01 PM 4 comments: 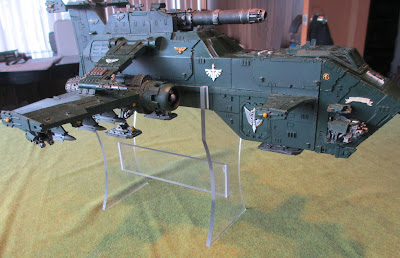 By popular demand we are going to make the Thunder Hawk Flight stand available for purchase. I've had a T-hawk for many years now, but have had the problem of trying to use it in a game, it is so damn big and heavy there was no way a little flight stand would support it, and a big stand would have a huge base. When I heard Escalation was on the way I knew this was the Thunderhawk's time to shine.

Mrs. Blackheart and I sat down and cranked out a couple of prototypes, then drafted the current design in Autocad. The final version is made out of  everybody's favorite  thermoplastic  polycarbonate, Lexan! So it is very strong, won't shatter like Plexiglass and as an added bonus is (mostly) bulletproof. The downside being it is more expensive and a bit of a pain to work with.

Each stand is hand made with the help of a computer-controlled cutting servitor and available in two colors: Smoke and Clear. 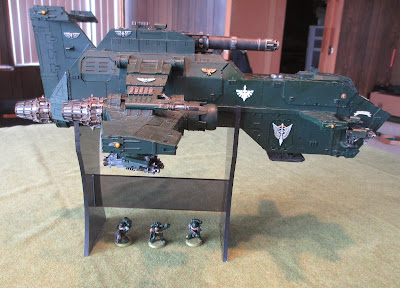 It is very stable and strong. Takes a surprisingly small footprint on the table, the crossbar is high enough that most Marines will fit under it. And it can be yours for the low, low price of $90.00, and that includes free shipping anywhere in the U.S. Overseas shipping will be extra. 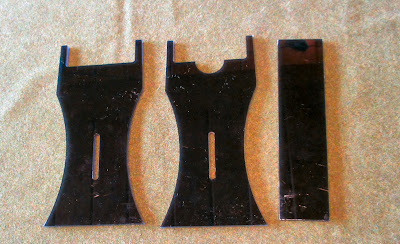 It will arrive as you see here, having been test fitted. It holds together great without any glue, but feel free to put a few drops to be sure. We will be making them to order, so it will take a week or so to get it in the mail. Don't let your Thunderhawk sit on the sidelines anymore! Get one today!

Drop me a line at Atomicwarlord@gmail.com.

The Emperor Protects
With Lexan

Posted by Marcus the Blackheart at 12:56 PM 4 comments:

Time to give Escalation a try. So we went for one of the "worst case scenarios". A army with a super heavy flyer armed with a dreaded "D" weapon vs. a force unprepared for for such a thing. 2000 points a side and we rolled on the fancy new Alter of War missions table and got #4, the appropriately named, Approach of Doom.

I took my very rarely used Thunderhawk and stuffed it full of fun. That left three five man combat squads on the table to start the game. I put them in as much cover as I could find, still nine of the fifteen were picked off by the overwhelming Eldar force.

Top of Turn Two, Dark Green Death arrived out of the sky. The Thunderhawk zeroed in on the Wraithkinght and took it out with a solid hit from the Turbo-laser Destructor (did four wounds), two lascannons and a pair of Hellstrike missiles. The four twin liked Heavy Bolters gutted a Guardian Squad.

Mrs. Blackheart tossed the kitchen sink at the Thunderhawk, but lacking any dedicated anti-aircraft platforms, only managed to inflict a single hull point. In return a Wraithlord was killed by the Turbo-Laser, and a lucky Hellstrike missile got past the Jink and Serpent Shield and blew up a Wave Serpent. Yet more Guardians fall to the dozen, twin-linked Heavy Bolter shots. By entering Hover mode, the Thunderhawk became much more vulnerable and lost three more hull points to a much depleted Eldar army.
Then the T-Hawk landed right in front of the Eldar Autarch leading a bike squad.

The Company Commander, his command squad, a Chaplain, a Dreadnought, and 15 Tactical Marines poured out and onto the field. The Eldar Autarch, a warlock, six bikers, and a pair of Vypers were taken down by shooting and close combat. The Thunderhawk went back into hover mode, took one more hull point of damage (total of five now) and killed off a wounded Wraithlord and mopped up a Guardian Squad.
And that was the game. All Gillian had left was most of a Guardian Squad holding an objective.

And yet I barely managed a win, 4-3. That is one of the balancing points of Escalation. 1 VP for every three hull points damage to a Lord of War. If she had managed one more hit the game would have been a tie. We will get in some more games to get a better feel what Escalation really does to the game, but for now, it doesn't seem like the sky is falling this time either. To that end we will try the Eldar Revenant Titan, vs. the Steel Legion to see what 2x2 "D" shots a turn will do.


The Emperor Protects
But He makes it challenging 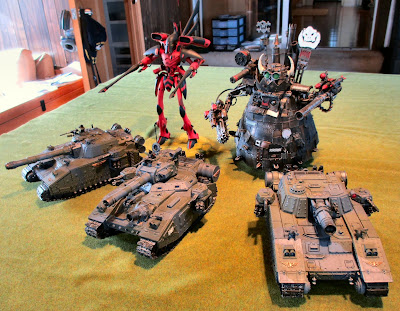 Cue "They have ruined 40K!" again. Two hardcover supplements came out this week for 40K. Today let's look at Escalation. The book is true to it's name, it does escalate things in the game a bit.

What the book is: Hardcover, 96 full color pages. Only a few pages of that are rules. And yes, they are the super heavy rules from Apocalypse. 17 Datasheets for the "Lords of War" (Super Heavies), six new missions and  three challenge missions. Compact and to the point with lots of pretty pictures.

What the book does: It adds a new "Lord of War" slot to the Force Organization Chart. So your army may now take one super heavy from the 17 choices in the book. (Eight of them being Bane-Shadow-Blade-Storm-Hammer variants) As they all have the same profile as in Apocalypse, I don't see any issue with taking a super heavy from elsewhere, especially if you are fielding one of the armies without a super heavy in the book. The Tyranids, for example have only the Harridan listed as a Lord of War. I don't (yet) have one, but I do have a Barbed Hierodule, which I will be gleefully using. I think this is the part that I like the most, being able to take the Big Toys out of the display case more that a couple of times a year.

But what about game balance now? Good question. Clearly this won't be really known until a fair number of games have been played. I suspect it will work out well. Lords of War are very powerful and take out a unit or two a turn, but they are huge targets, and points heavy. Plus there is a new Warlord trait table and a new secondary objective which gives a Victory Point for every 3 hull points of damage you to the Lord of War.

And of course, the Elephant in the room, Destroyer weapons. I think the new D-Weapons table brings them down a much needed notch, and make them only a 83.4% sure thing as opposed to the 100% they used to be. I am much more concerned about the huge high strength templates with no cover save than D weapons unbalancing the game. The fun part will be finding out.

So should you pick up this book? Light on the fluff, lots of nice pictures, handy to have the Super Heavy rules in a easier format, new Warlord Traits, and a bunch of new missions. I give it a solid B+.

Next up, our first Escalation Battle report.


The Emperor Protects
You are going to need it


I know, two Thanksgiving puns in a row, sorry. But Pete's article was a surprise, sort of like how damn good the Eldar Holo-field is now. After our Tukey day meal, Mrs. Blackheart and I decided to have a fast paced bit of 40K.

Based loosely on a Spearhead scenario, the Eldar must exit the table edge with as many of the Wave Serpents packed with party goers as possible. The Imperial guard have it easy, line up and shoot a lot. I took 2500 points of Heavy Metal, including a Blaneblade. She got 200 extra points to balance out her being the attacker. This was, as we will see, totally unnecessary.

My Baneblade disappeared on turn one along with a Leman Russ and the Hydra got shaken. No big deal. I have a ton of guns and those pointy ear bozos have a mere armor 12. And Jink. With  Holo-fields. Still not fullly vested in the new Eldar Codex we took a minute to discover the evil (but appropriate) change with the Holo-fields. Jink gives a 5+ cover save, great neat. Holo-fields give +1 to cover saves. Not as great if you shooting at them. And course now a 3+ cover save if going flat out. Sigh. Well, it was a quick game.

I shot a lot. I hit a good deal. Gillian rolled very well and very little damage was done to the rapidly closing Eldar. The Crimson Hunter is a very good anti-tank weapon. It smoked my Hydra, and the Leman Russ Destroyer. I didn't bother shooting at it, I had far too many other issues at close range.

So I killed two Vypers, a Falcon, a Fire Prism, and one Wave Serpent full of Dire Avengers in four turns of  increasingly panicked shooting. She wiped the guard off the table, and escaped. Damn advanced aliens!

A fun, fast paced game it was. Next time I'll bring the Dark Angels.

Hammer of Vaul
Crushes You

Posted by Marcus the Blackheart at 11:54 AM No comments: