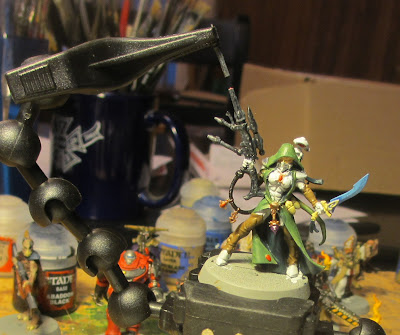 I'll be honest, some of us laughed at the Citadel Assembly Handle when it was released. It just looked goofy, and kinda impractical. 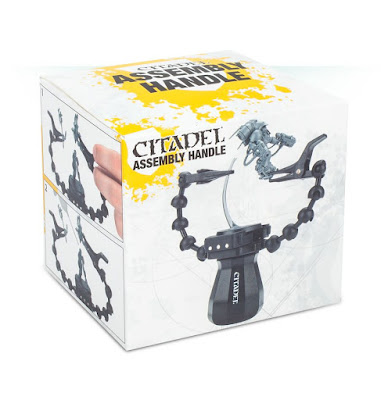 I received one as a birthday gift, so I decided to give it a fair chance the next time I built something.
A few days later I was deep into painting the Blackstone Fortress guys, when disaster struck! I lost track of where Ms Eldar Ranger was on the table and bumped her long rifle with my elbow and broke the slender weapon.

With Vaul's grace I was able to find it on the carpet, but how to fix it? I wanted to use plastic cement so it would kind of weld back together. It is a super thin part so holding it in place for a few minutes for the glue to set, and then at least half an hour to really cure was going to be difficult. 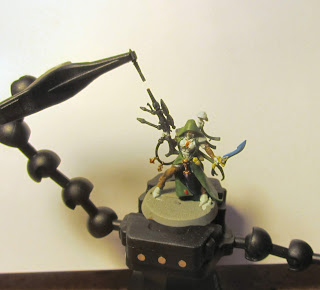 Unless one had some kind of wonder tool! I quickly set it up and did a dry fitting with no issues. A little bit of glue and presto! I placed the handle someplace safe from the cats and me. About a hour later I checked on it, carefully removing the clamps to find the rifle perfectly straight and solidly fixed. 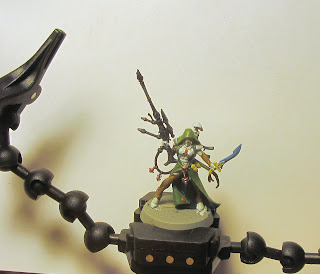 I have since used them a few time for similar type of construction. The "arms" are well segmented to achieve almost any position. Very useful to secure a tricky part and let it dry while you move on the something else. Fun to use, inexpensive, and quite handy.

Go Build Something
And Let the Robo-Arms Help


Posted by Marcus the Blackheart at 4:36 PM No comments: 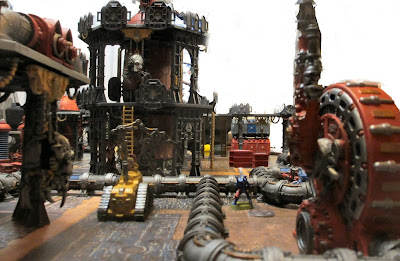 Happy New year! Momentum has been increasing here now that the holiday season is finally past us. The Industrial terrain is complete, and the new city buildings are going well. I decided to go with the dusty tan look because I like it, and it gives good contrast to most models.

When the City is done we are going to try a short Kill Team Campaign followed by a full-blown 40K/Kill Team campaign kicking off in March.

There is a good backlog of board games we shall try in the upcoming months and report on.

I am going to do my best to keep my slightly aggressive painting/building schedule. Next on the bench will be the figures from Blackstone Fortress, and some after action write ups on the game as well.

I'm sure GW will have some surprises in store for us as the year unfolds. What happens after the next two Codexes? (Genestealer Cult and Sisters of Battle) We shall find out!

The Emperor Protects
With Champagne and Gunfire

Posted by Marcus the Blackheart at 3:56 PM No comments: