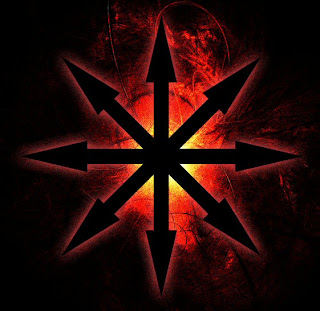 In honor of our American holiday celebrating unintended consequences, I bring you a guest article written by Arch-Heretic Pete:

Let me be clear right up front.  I love the Ruinous Powers.  I’m dedicated to them.  I first got into this game with the old Tyranid snap-together models (back in the late ‘90s), but the minute Marcus showed me the Chaos codex and I read the descriptions of the Legions, I was hooked.  I had an Alpha Legion army back when they weren’t cool.  And that army grew and fractured, so now I have over 4000 points of Legionnaires, but also a solid Thousand Sons force, a Death Guard army, a fair chunk of World Eaters, and enough Emperor’s Children for a very nice Allied force.
I’m with Chaos.  I’m invested.  I’m here to stay.
That being said...
Chaos has been getting screwed for a while now.
I don’t say this out of anger or nerdrage, just as an honest fact.  The past two Chaos codexes have been very weak.  They’ve been weak compared to what came before them.  They’ve been weak compared to other contemporary codexes.  There are lots of folks who will pound their math hammers and tell you the current Chaos codex is perfectly fine as long as you take this and this and this and use them like that... but I’ve always felt that any codex that only offers one viable build is kind of a failure.  A big aspect of this game is the variety, and what little variety the Chaos Marine Codex has is... well, pretty useless.  Hands up, anyone who’s seen a lot of Mutilators out on the battlefield...
But I digress.  Just a little.
While talking with our host here the other week, it struck me that the Chaos Marine codex could be improved drastically with just a handful of tiny tweaks.  I’m not going to talk about stat lines or wargear or pricing (okay, maybe once about pricing).  These are much simpler tweaks which would let Chaos feel like a more viable army.
So, here are my suggestions and the reasoning behind them.  If anyone happens to be a major stockholder in Games Workshop, please feel free to pass them on.  Even if it’s just for a good laugh...

3) Veterans of the Long War
For all of the original legions (Black Legion, Emperor’s Children, Iron Warriors, World Eaters, Word Bearers, Death Guard, Thousand Sons, or Alpha Legion), Veterans of the Long War is free for any unit it applies to.  Non-legion Chaos armies may purchase the Veterans of the Long War rule at the listed cost per model.
-------------------------
Now that Space Marine Chapters are getting free bonus rules just for their paint scheme, it seems unfair not to give the Legions the same advantage.  Especially when it should’ve been a given rule for them from the start.
Yes, this means the Red Corsairs or anyone’s favorite home-brew army have to pay a few extra points.  But the original legions need to be distinguished somehow, and this is the easiest way.  Plus at least a third of the players out there will just argue “counts as” anyway and say their Red Corsairs army is using Black Templars rules, sooooo...

4) No more Havocs
The entry for Havocs is removed from the army list.
-------------------------
Pretty straightforward.  Havocs are, in my opinion, a weird holdover from when Chaos Marines were just Space Marines with horns and spikes.  They don’t really fit the idea of a wild, unrestricted army when their squad size and weapons options are almost a dead ringer for Devastator squads (without the ability to split fire).  Besides, the last rule kind of makes up for this...

-------------------------
Under the past two codexes, Space Marines can build lots of very flexible, five-man tactical squads using the Combat Squads rule.  Chaos Marines, on the other hand, have been forced to take a ten man squad just to have a heavy bolter.
This new rule reflects the “warband” nature of Chaos Marines in two ways.  One is that it allows for a huge amount of special or heavy weapons in one squad (very un-codex).  Two is that it keeps the idea of one champion having absolute control and not letting those under him out of his sight.  So it’s possible to create a massive troops squad of twenty Chaos Marines with four flamers, or four meltaguns, or four lascannons... but they won’t be allowed too far from their champion.
This also means siege/firepower-centric armies can field lots of heavy weapons and still have all their heavy slots open for tanks or daemon vehicles.  Good news for Iron Warriors or Word Bearers.

And there you have it.  Feel free to correct, debate, or mock down in the comments.  Now let’s all give thanks to the Ruinous Powers.  And have stuffing and cranberry sauce.

Posted by Marcus the Blackheart at 9:18 AM 9 comments:

Why No Assault Troop Army? 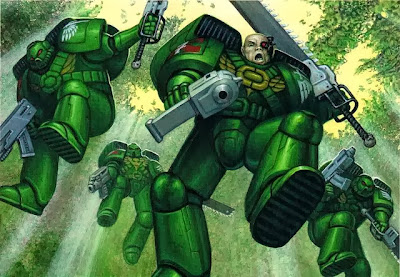 Space Marine players have been able to take an all Biker army since Fourth Edition. What has been missing the last two editions is the all Assault Trooper army. My question today is why?

If a Space Marine Captain or Master takes a bike then Bike Squads count as Troops. His Command Squad can also take bikes. Great. Nicely thematic and makes sense since all Tactical Marines have been trained on bikes. Also good if you are representing one of the reserve companies.

This is not true if your Captain/Master takes a Jump Pack. This strikes me as strange since all Tactical Marines have been trained on Jump packs and had to spend time in a Assault Squad.

Of course this all stems from the fact that I want to start a new Marine Army. I have 10,000 points of Dark Angels and 4,000 of Space Wolves, so I wanted a more Codex-y Chapter. Maybe Ultramarines, maybe a new Chapter. I wanted a Space Marine aerospace assault themed force. Jump troops, Land Speeders, Stormtalon/ravens, that sort of thing. I happily sat down with the new codex to hammer out a new army and found I really couldn't do it. Lame.

The main stumbling block being the inability to take Assault Troops as a Troop choice. The solution is easy. The real question is there any reason is shouldn't be allowed? A Space Marine on a bike cost more, but is much more effective that a Space Marine with a Jump Pack. Is there something I am missing or did the powers who wrote the new Codex just didn't think of it? At any rate, were is my fix.

Airborne Assault: If a detachment includes a Chapter Master or Captain equipped with a Jump Pack, Assault Squads of a least ten models may be taken as troop choices instead of fast attack.

And that's it. Please leave your comments for or against it.

The Emperor Protects
With Jet packs!
Posted by Marcus the Blackheart at 12:53 PM 7 comments: