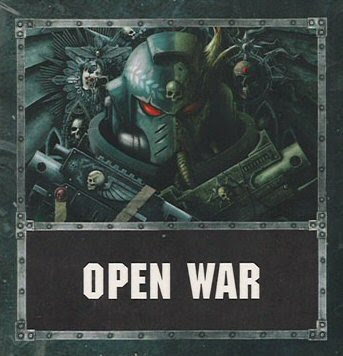 One new 40k 8th release which received little fanfare was the deck of Open War Cards. Which is a shame because they are really quite good.

Fast and easy to use,  You draw a Deployment card, which has a graphic depiction of the deployment zones, a Objective card, and a Twist card. The Objective card is self-explanatory, and the Twist card has some delightful thing that messes with both sides like Acid Rain, Warp Storm, or Orbital Debris.

If one side has a higher Power Level than the other, then it receives a Ruse card, which is a helpful boost. If the one side also outnumber 2:1 that player also gets a Sudden Death Card. It is just as the name suggests: a Sudden Death Victory Condition for the outnumbered player. Some of these cards are quite fun. Both the Ruse and Sudden Death cards are kept hidden until used. 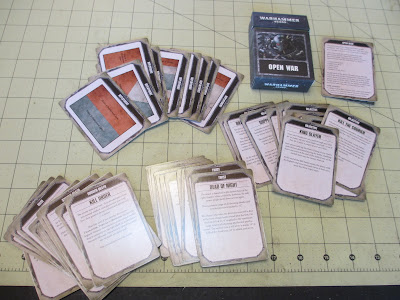 An interesting variant is if both players are within five PL of each other give each of them a Ruse and Sudden Death card. Makes for a unpredictable battle.

Open War is great for quickly setting up a match, and with enough card combinations to give it a lot of replayability. Give a try if you haven't yet.


Go Roll Some Dice
But use the Cards Too!