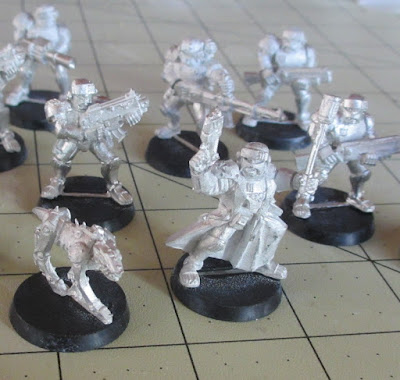 As I ramp up for the Summer Campaign I delve deep into the box of lost toys. Behold! A full squad of Necromunda Enforcers, the last version released, not the classic I've got a huge bird on my helmet guys. I also re-discovered my Sisters of Battle, and a Escher gang. All in glorious metal. 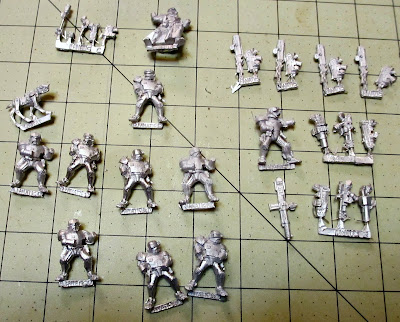 I'd forgotten how much I hate building metal. Oh, sure nothing has the heft of a good metal miniature, but putting tiny arms and weapons on with CA glue that may or may not want to adhere...that's not part of the 'relaxing' bit of the hobby. But it is why the Emperor, in his wisdom, gave us Rum. And Band-Aids. I somehow never fail to cut myself while trimming metal.

The shotgun arms are such a bad fit on these figs, it's no wonder they weren't in print long. The Enforcers do look very nice after being coaxed together. The Escher gang were mostly one piece figures, so they went upon their bases far easier. 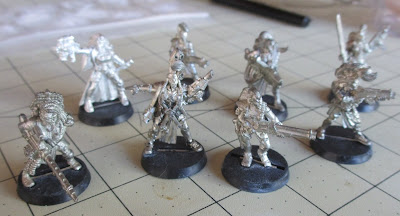 With the metal relics all assembled (Sisters and Inquisition had been assembled long ago) it is time to slap some paint on them. What better way to spend Friday afternoon than with an epic priming session. Grey primer for all my friends!

Next up: Time to talk about Rules.


The Emperor Protects
5+ Save Versus X-acto Blades

Posted by Marcus the Blackheart at 12:54 PM 2 comments: 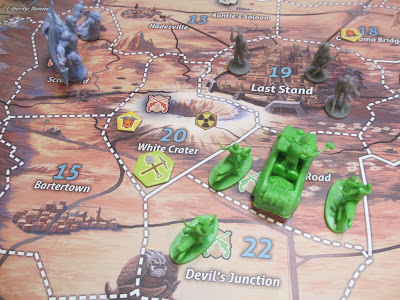 Defenders of The Last Stand by 8th Summit Games is a pure co-op board game for 1-5 players. Set in the post-apocalypse wasteland of the near future, players must defeat four Overlords and their marauding groups of raiders/mutants/bad guys and save the city of Last Stand.

The designer, Richard Launius of Arkham Horror fame, also did Defenders of the Realm. A high fantasy version with similar gameplay but with with orcs, demons, and dragons. Last Stand adds some new features which expand gameplay greatly. Both games have a sort of Pandemic gameplay mechanics feel to them. Which is a good thing. 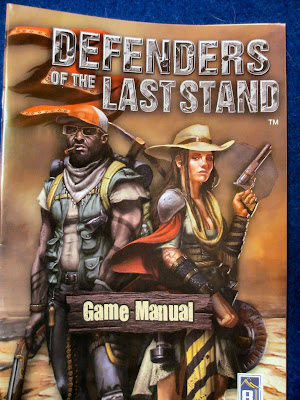 Play is fast and fun, with many action options per turn. Go on a mission? Scavenge some lost items? Fight some the minions? Or if your group has gained enough items/cards, you can take on one of the four Overlords.

Three of the four Overlords make steady progress towards Last Stand. The mutant lord know as "Puke" flies around randomly, spawning new Abominations. All are dangerous and have to be stopped. Each time a Overlord is defeated the game ramps up the difficulty. Once all four are killed, Last Stand is safe and the players win. If any Overlord reaches your city you lose. If too many minions are on the the map, or in Last Stand, you lose. If too many raider bases get built, you lose.
Nobody said the apocalypse would be easy. 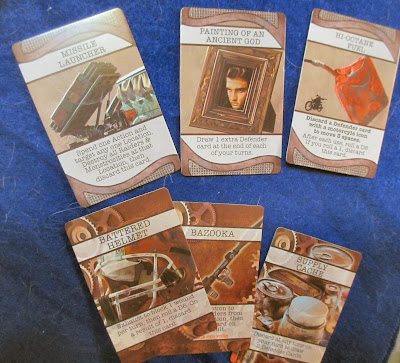 There are some fun artifacts to find and side missions to go on. There is an "Adventure" spot the moves around the map that can be sought after. Some areas are teaming with radiation, and if you hang out there you may wind up with a mutation. Most are good, a few are bad, but if you get more than five points of radiation, your character becomes an enemy Abomination. Fun stuff. 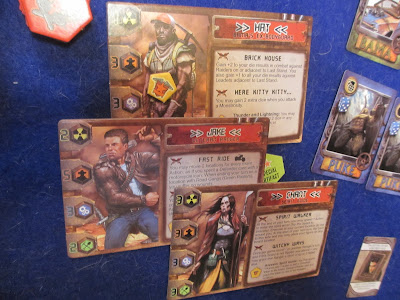 There are a few minor downsides to this game: The art is okay, the plastic figures are not great, and the rulebook could be clearer. However, after starting one game, we got the hang of it pretty quick.

On the plus sides, the theme is great, lots of things to do, and it plays quickly. I prefer this over Defenders of the Realm (which I like a lot). It feels like this game is kind of under the radar being from a small publisher, which is too bad, because it is a whole lot of fun. 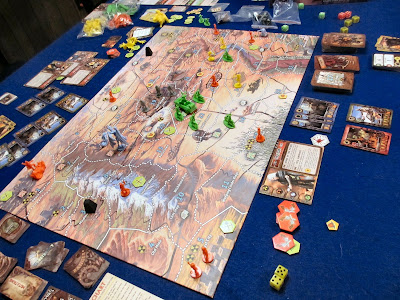 If you like your post-apocalypse Eighties B movie style, then this game is worth checking out.

Go Roll Some Dice
Become a Warrior of The Wasteland

Posted by Marcus the Blackheart at 1:47 PM No comments: