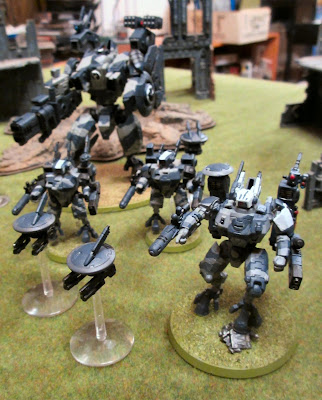 I've managed to get in three games with my Tau. They did very well, shooting up Blood Angels, Orks, and Eldar. Still lost two out of three games on victory points. That is one of the things I really like about the Maelstrom of War missions. Objectives really count.

The Tau are still very bad at Hand to Hand, but to be fair, few armies can stand up to twenty Striking Scorpions AND their Phoenix Lord being dumped in their lap. Stupid jinking Wave Serpents. 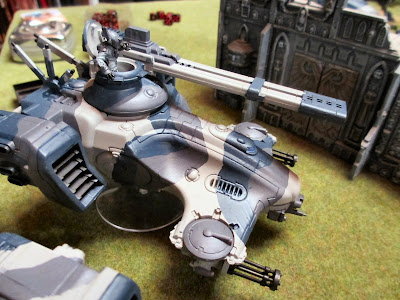 Shooting is still the Tau's game, and they can bring a lot of heat, especially when I remember to use the makerlights in the correct order. Commander Longstrike is my current favorite, perhaps a bit overpriced, but he is a great Tank Killer. Taking Hammerheads in a squadron of three is something I haven't tried yet. I do like the +1 BS boost, but not having split fire is a little worrisome. Oh sure, you will do a lot of damage to the unit you are shooting at, but it is still only one unit. I will give a try in my next game. 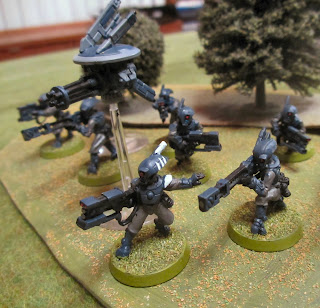 I only picked up one new model in this go around, the Coldstar/Enforcer Command suit. It is a excellent kit, and a welcome addition to my army. Makes the boss really stand out. While I am a huge fan of Mecha battlesuits, the large Stormsurge unit did nothing for me. I would rather have another Riptide or two. Hmm. That's a good idea...


For the Greater Good!
Just Stop Charging us!
Posted by Marcus the Blackheart at 12:13 PM 2 comments: 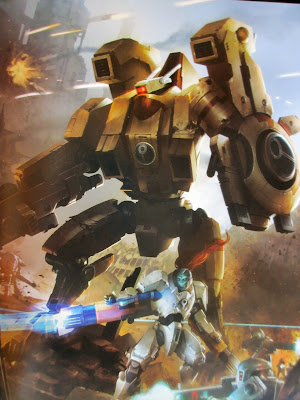 New shiny Tau books (finally) arrived for me today, so I have had only a brief flip through.
Codex: Tau Empire has brought the Mech-loving blue skins into line with 7th edition. Not a lot of changes to the base units, but the addition of Warlord traits, Formations, and continuing the datasheet style make this a essential book for Tau players. Not much artwork, but lots of very good quality photos of models.

Some of the changes were expected, Hammerheads and Sky Rays can now be fielded in squadrons of 1-3 vehicles, and Piranhas expanded to max size of 5. The surprises for me where that Riptides are now 1-3, and VX-8 Crisis squads are 1-9! This will be fun. Of course the newly released units are in the Codex: Breacher Teams (Fire Warriors with Pulse Shotguns) The Commander in fancy Enforcer or Coldstar battlesuit, the Ghostkeel, (big stealth suits), and the very big Stormsurge artillery suit. And new Drones. Lots of new Drones. The Tau now have more drones than the NSA.

I plan on bringing the Tau to the table this weekend to see what tweaks were made to all the support systems and such, there will a battle report next week. 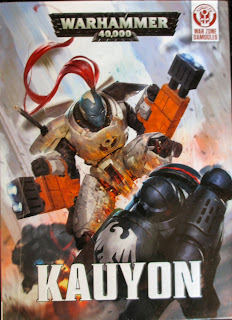 The other Tau book released was the War Zone Damocles: Kauyon set. Two very nice hard covers in a slipcase. 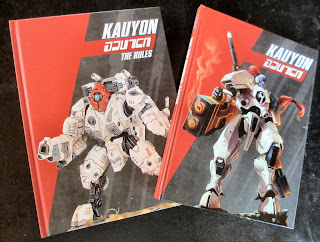 Following in the mold of Shield of Baal last year, the two books are divided up into the fluff "history" book and the Rules. The fluff book has lots of new pretty artwork and a good narrative of the campaign. The Rules book is just what is says: Eight Echoes of War missions and a campaign chart to use them. Well done sections acting as a mini-codex for both the White Scars and the Raven Guard. The Tau section is interesting. It has a large amount of overlap with the Tau codex for the new units. The only formations not in the Tau codex are the five dealing with the Tidewall fortifications.

Overall, I am well pleased with all the books and look forward to dealing Mecha-suited death.


For the Greater Good
Which is Terribly Subjective

Posted by Marcus the Blackheart at 12:28 PM No comments: