Old One Eye and the Crushers 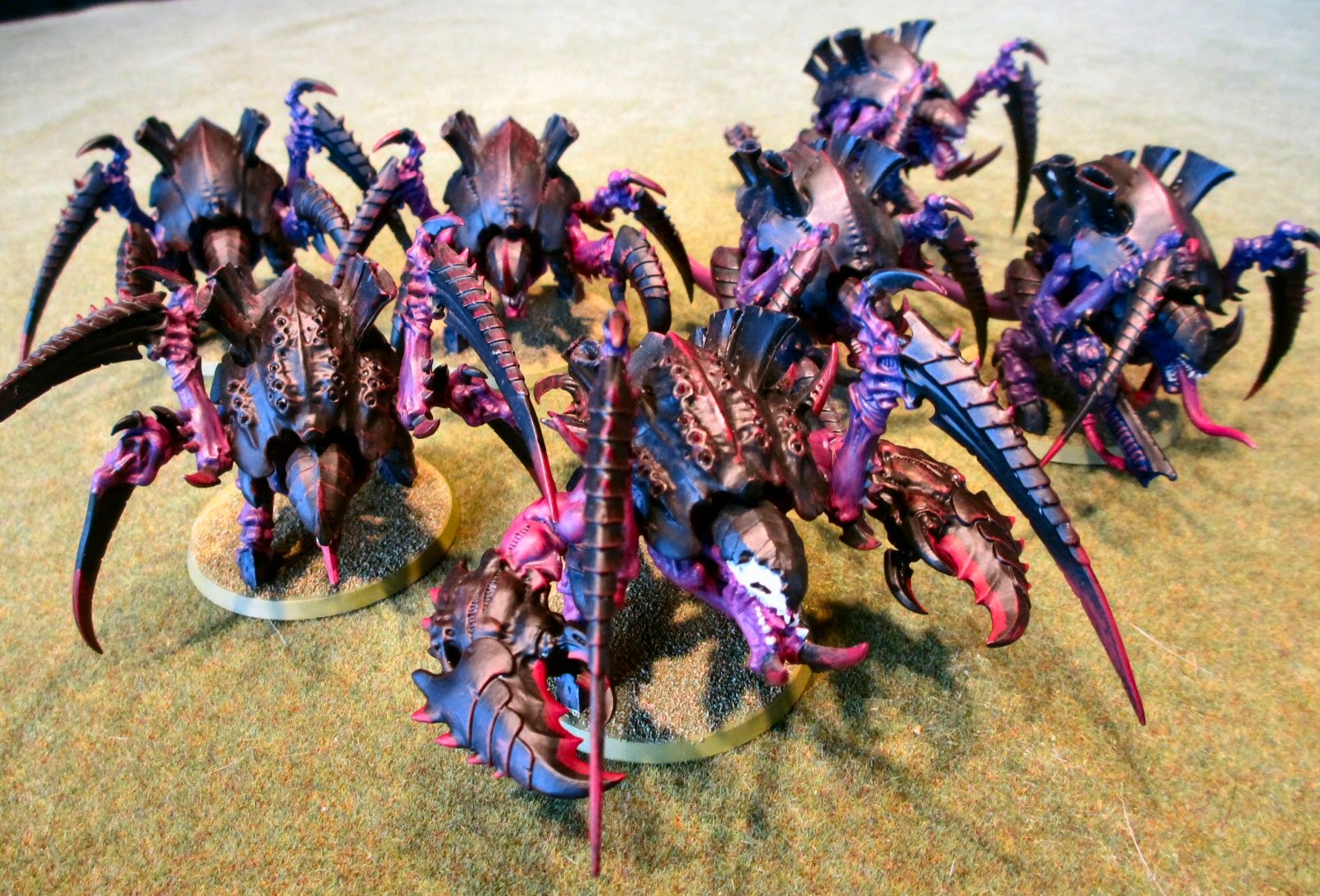 My slightly mad Carnifex upgrade project has seen completion. Soon six Carnifexes led by the new & improved Old One Eye shall crush all before them! Or get shot to ribbons as they lumber across the field. 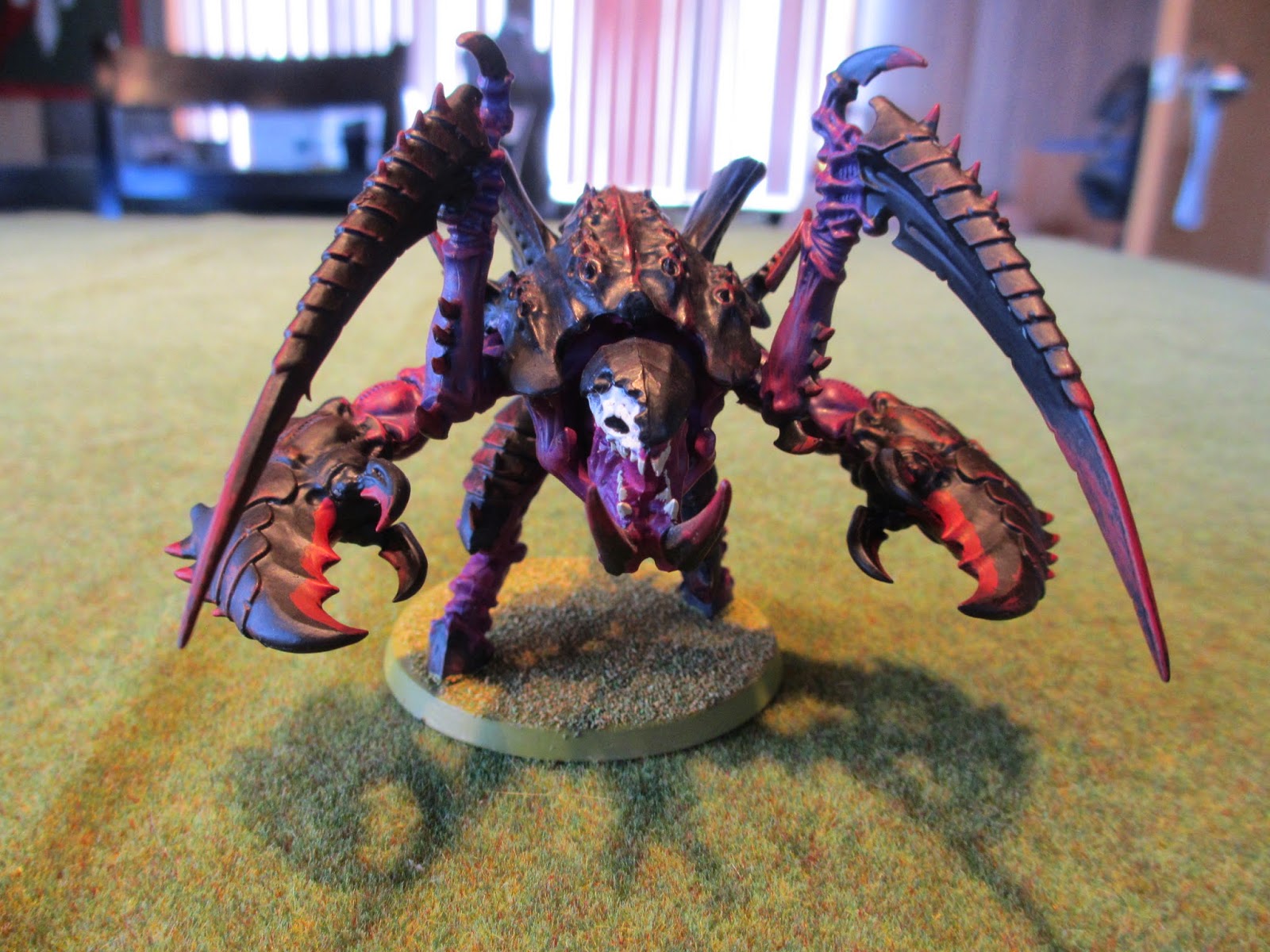 The Haruspex's plus-sized crushing claws look great on the old fellow. Rules wise, I think he was hit by the lazy brush as well. Making him a HQ unit? Great, but why not have him adjust the FOC a bit? Like making Carnifexes a troop or at least scoring unit? That would be shake things up a bit. I really enjoyed it when Old One Eye might get back up after taking his last wound, or when his regeneration was better, now it is the same as any other unit that takes it. I'm thinking of trying Feel No Pain for him, in addition to his regeneration. Not overpowering, just a little bump to give him back his flavor. 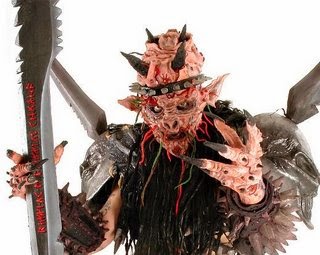 If there ever was a band that was an incarnation of 40K-style Chaos it was GWAR. I had many, many gaming sessions with GWAR on in the background. Clever lyrics full of over-the-top cartoony violence and sex, and then some more violence, they were not everybody's cup of tea. I saw then live several times with fellow Warlord Jeff, we escaped covered in stage blood and other alien fluids. It was great. 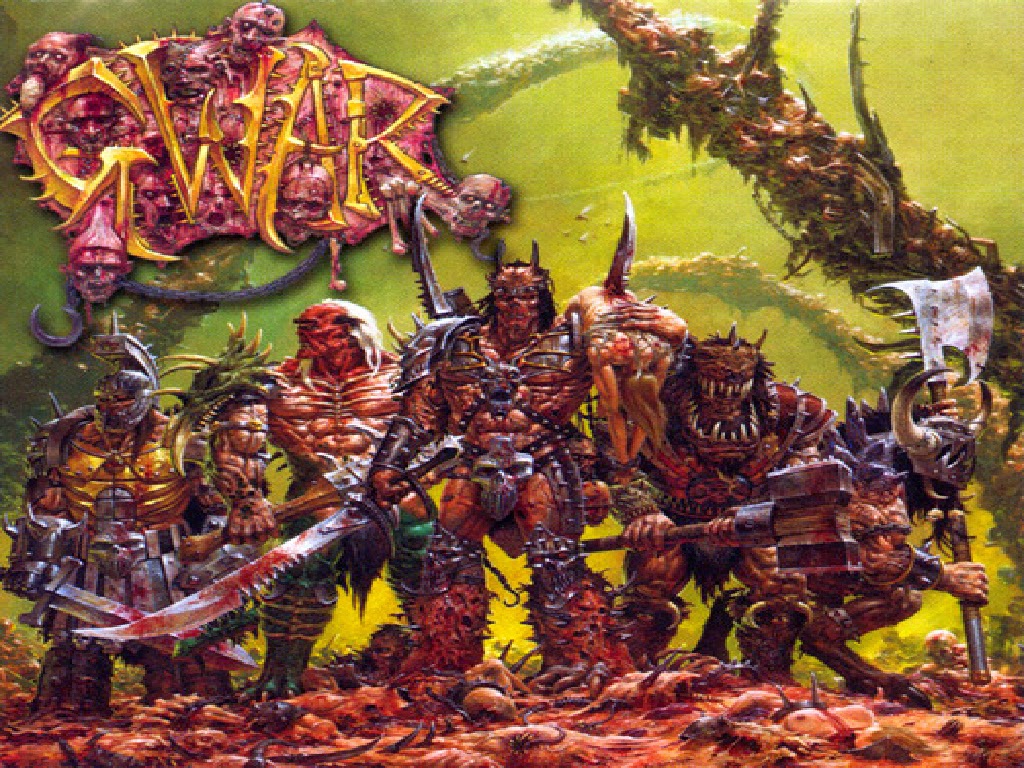 Sadly today, Dave Brockie, the human alter-ego of Oderus Urungus was found dead in his home. USA Today has a write-up here. He brought a lot of joy to our black hearts, he will be missed.


"From my fortress in
I watch the world die
On my Sony Trinitron that's switched to channel 5."

Posted by Marcus the Blackheart at 2:01 PM 3 comments:

I'm slowly catching up on my third re-do of my Tyranid army. I've gotten to the Carnifex portion. I have decided to add two more of the big lugs to my force, mostly because I want to see people's faces when I put down six Carnifexes plus Old One Eye. I am adding crushing claws to two models, so I went for a dive in my bitz bin. I pulled out a few, and to my surprise one was bigger.

Doing a little backtracking I found that the Crushing Claws that come in the Tyrannofex/ Tervigon kit are a bit larger than the "standard" ones. As luck would have it I had two sets floating around. Pete had suggested using the big claws from the Haruspex for Old One Eye, and he was right, they look terrifying on him. Pics on his re-do next.

The Great Devourer Hungers
And has evolved multi-tools

Posted by Marcus the Blackheart at 12:55 PM No comments: 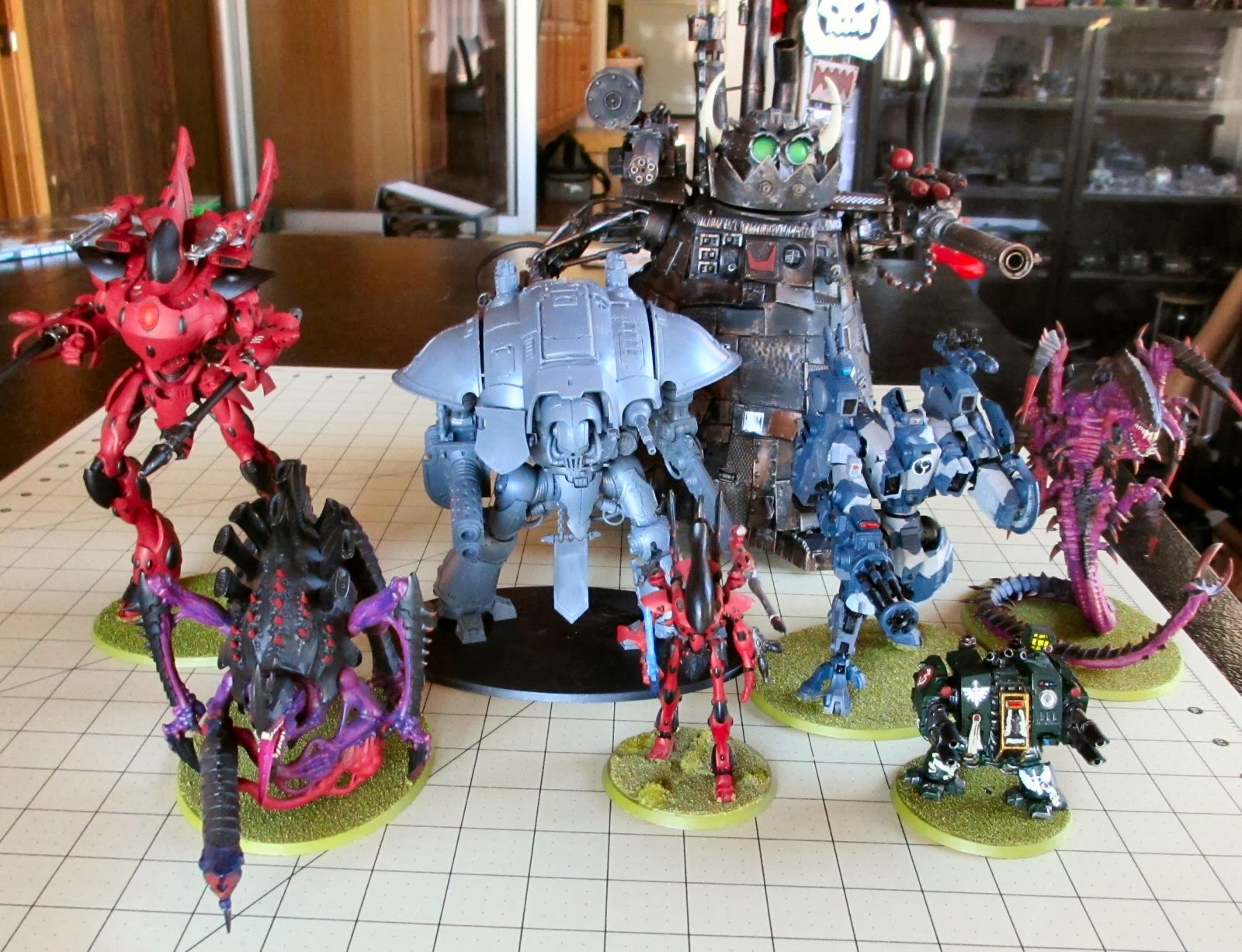 My, how far we've come since the plastic Dreadnought. The Imperial Knight takes it's place among the "Kinght" sized super-walkers. And a really nice fit it is.

I picked up the Codex and a Knight kit and I am very happy with both. The Codex is slim and only has stats for two units, but is very well done. As you all know, I love the 40K fluff. And they did a good job with this codex. Great new artwork, nice mood setting fiction blurbs, and all the rules you need to use a Knight, including a quick recap of the relevant Apocalypse rules.

I would have liked to seem a few more units in the book, they mention the other types of Knights, and that each house has "men-at-arms" but no stats or list choices. It really is a ally codex, and to re-introduce the Knight Households. Is it too much to hope for the other Knights in the near future? Hard to say.

Do you need the Codex to use Knights? Not really. White Dwarf #4 is all you really need to take them as allies. To use them as a primary detachment you'll need the Warlord traits table in the Codex and the optional Knightly Ranks table. But I really like the book and recommend it. 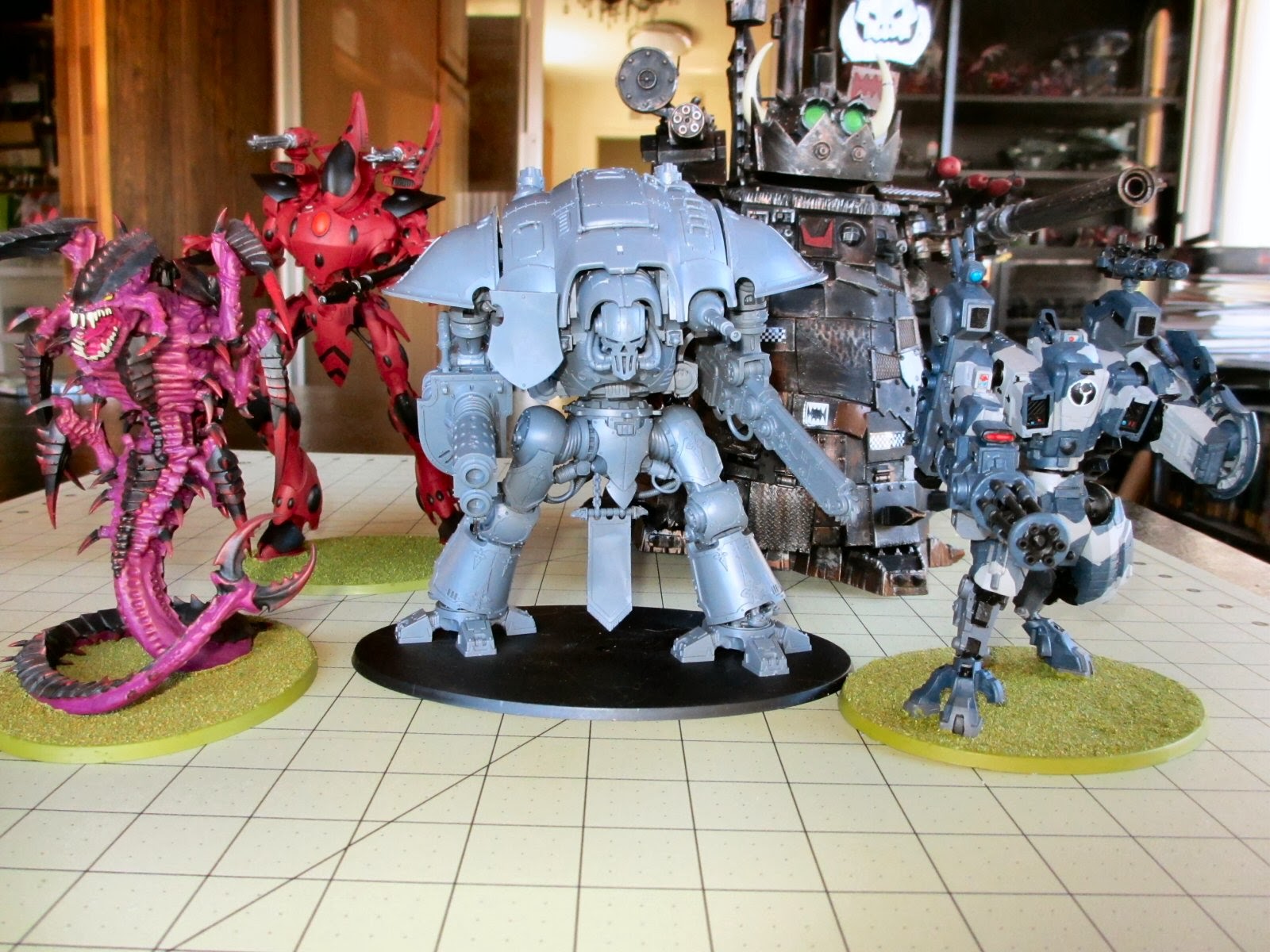 As for the kit, A+. Lots of detail, goes together very well and looks great. It has the old Imperial Titan "beattle back" feel. A bunch of cool little details, hand rungs, power cables, small eagle heads and the like. The only complaints I have with it at all, is that the legs are one fixed pose, and the main weapons were not made to be interchangeable. Minor issues at best. Three different "faces" and a large decal sheet round out an excellent kit.

The hardest part of new Knights is deciding on how I will paint mine. I am leaning towards the House Raven, Mechanicus ally, look but making a Freeblade or two does have an appeal. Either way, it will be a great ally for my Guard force. Until I get enough Knights to field a primary detachment that is.

The Emperor Protects
And looks good doing it

Posted by Marcus the Blackheart at 10:24 AM 3 comments: 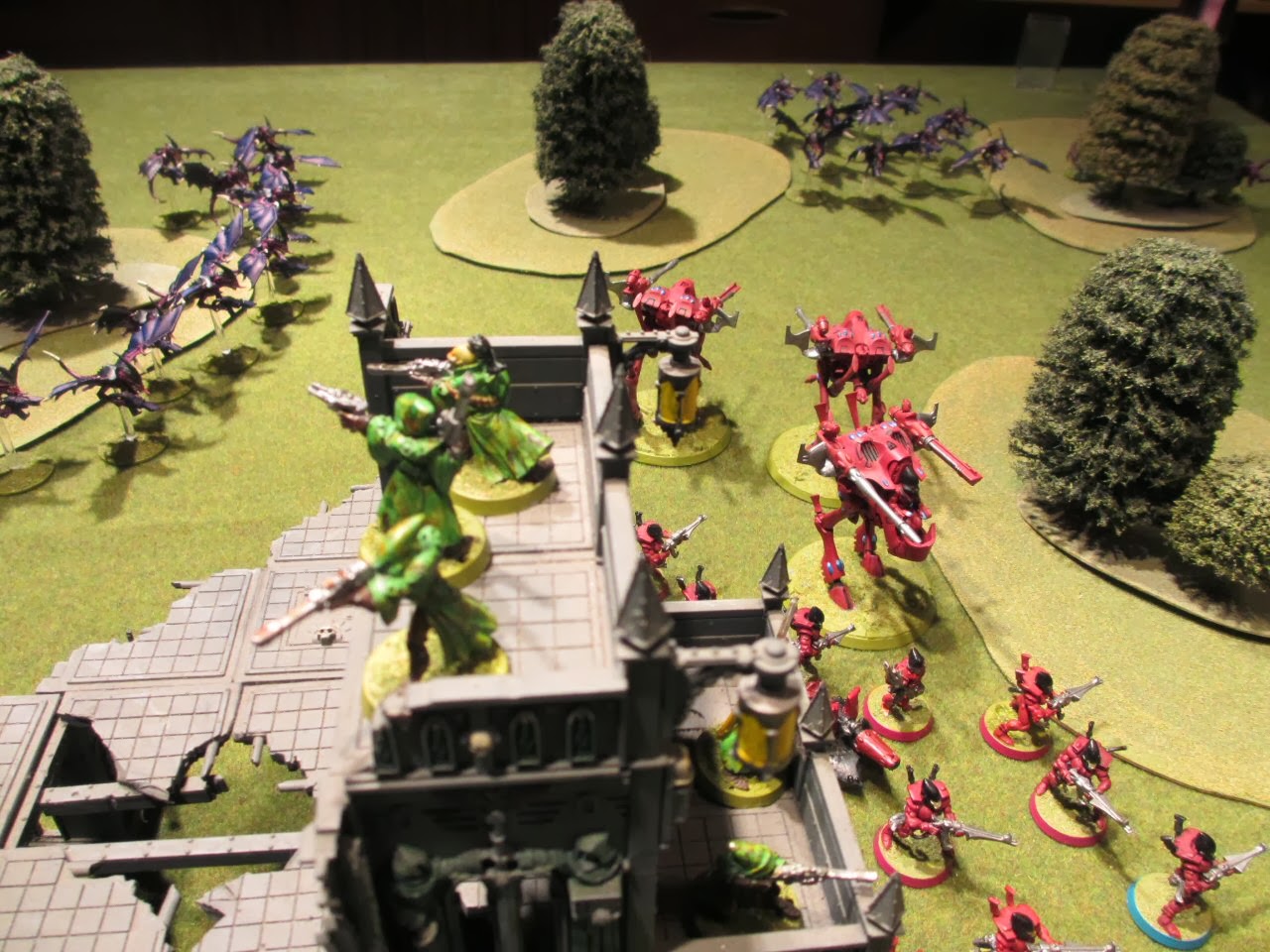 It's time for a narrative driven short campaign. For the next six battles it will be the Eldar versus Tyranids. For this little adventure it will closer to a RPG style game as opposed to pure competitive. Mrs. Blackheart will be bringing her Eldar, and I will be running the 'Nids and devising the missions.

I haven't played any RPGs for years now, and I occasionally miss the coherent story aspect of it. But that itch is easily scratched by a branched mini-campaign. It goes a little something like this:

The Eldar are looking for a lost Warp Gate on a planet with a light Human population. A small strike force is sent, with the intent to avoid the Humans as much as possible. They are to find the Warp Gate and determine it's condition. Easy-peasy. or whatever the Eldar saying is for milk run.

Mission One: Recon
One of the Eldar's reconnaissance teams is scouting a small town that had been recently abandoned. The reason for this is made evident when Tyranid vanguard creatures surround the Eldar. The decision is made to fight through and link up with the main Eldar force.

A 1000 point detachment starts near the center of the board. Fast and non-walker vehicles start in reserve.   The Eldar player goes first and receives 1 VP for each unit they get off the far short table edge.

The Tyranids have 1000 points of vanguard units. Litcors, Genestealers, and all three types of 'Guants. Deathleaper is the HQ. They score 1 VP for each Eldar unit destroyed. 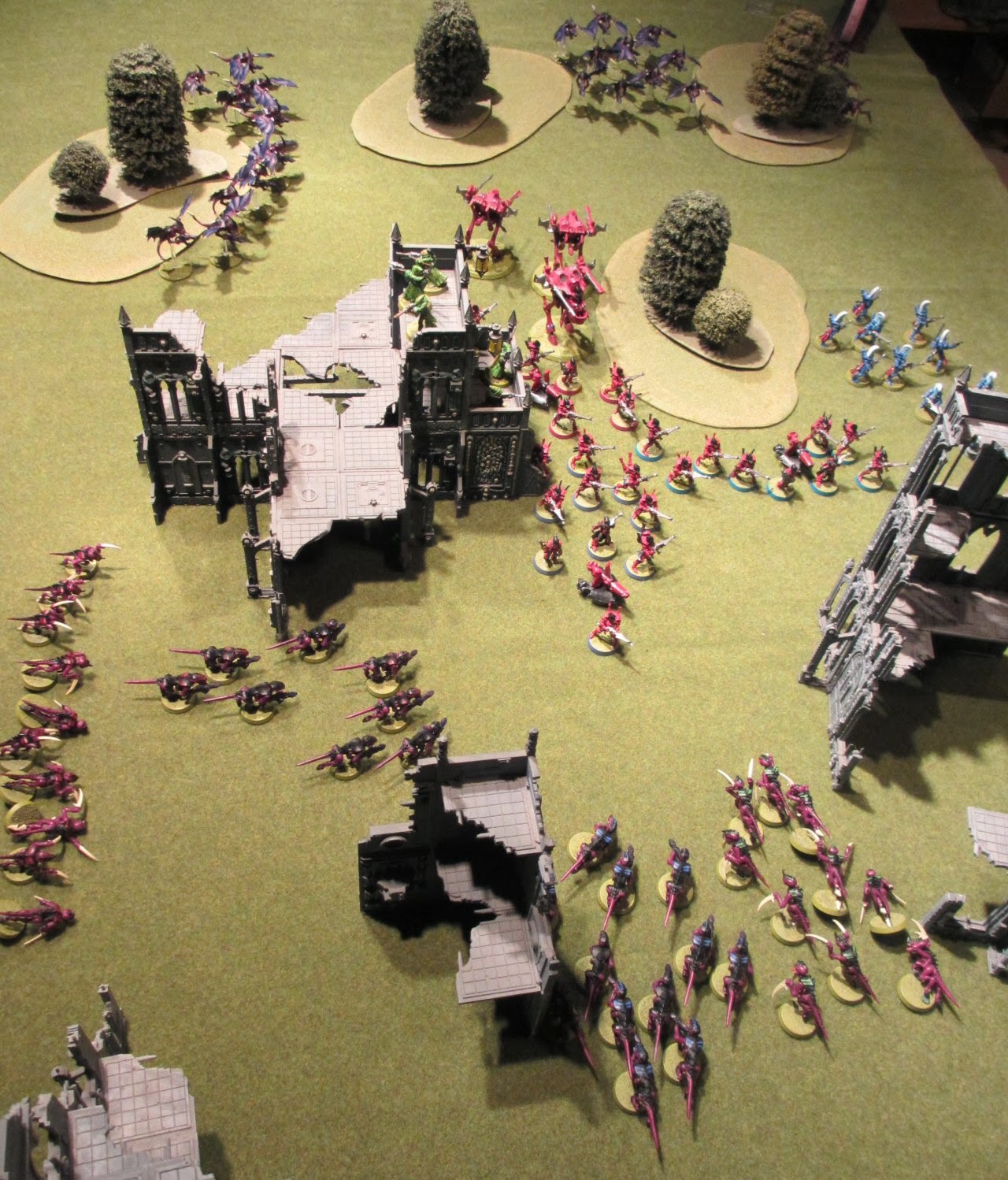 We used a couple house rules for this game. Our Lictor rules, and not having any synapse creatures on the table, the 'guants only made a instinctive behavior roll when they needed a morale check. They have been "pre-programmed" for this mission.

Things looked very daunting for the Eldar, but some very good shooting thinned out the swarms of Hormagunts and wiped out a brood of Genestealers hiding in a building.

It got lively on turn two, with the arrival of a pair of Vypers for the Eldar, and Deathleaper and three lictors for me. A War Walker was destroyed by a flesh hook shooting attack from a Lictor. Deathleaper made short work of the very annoying Rangers. Another Lictor charged and killed three Dire Avengers before being killed by the Autarch. 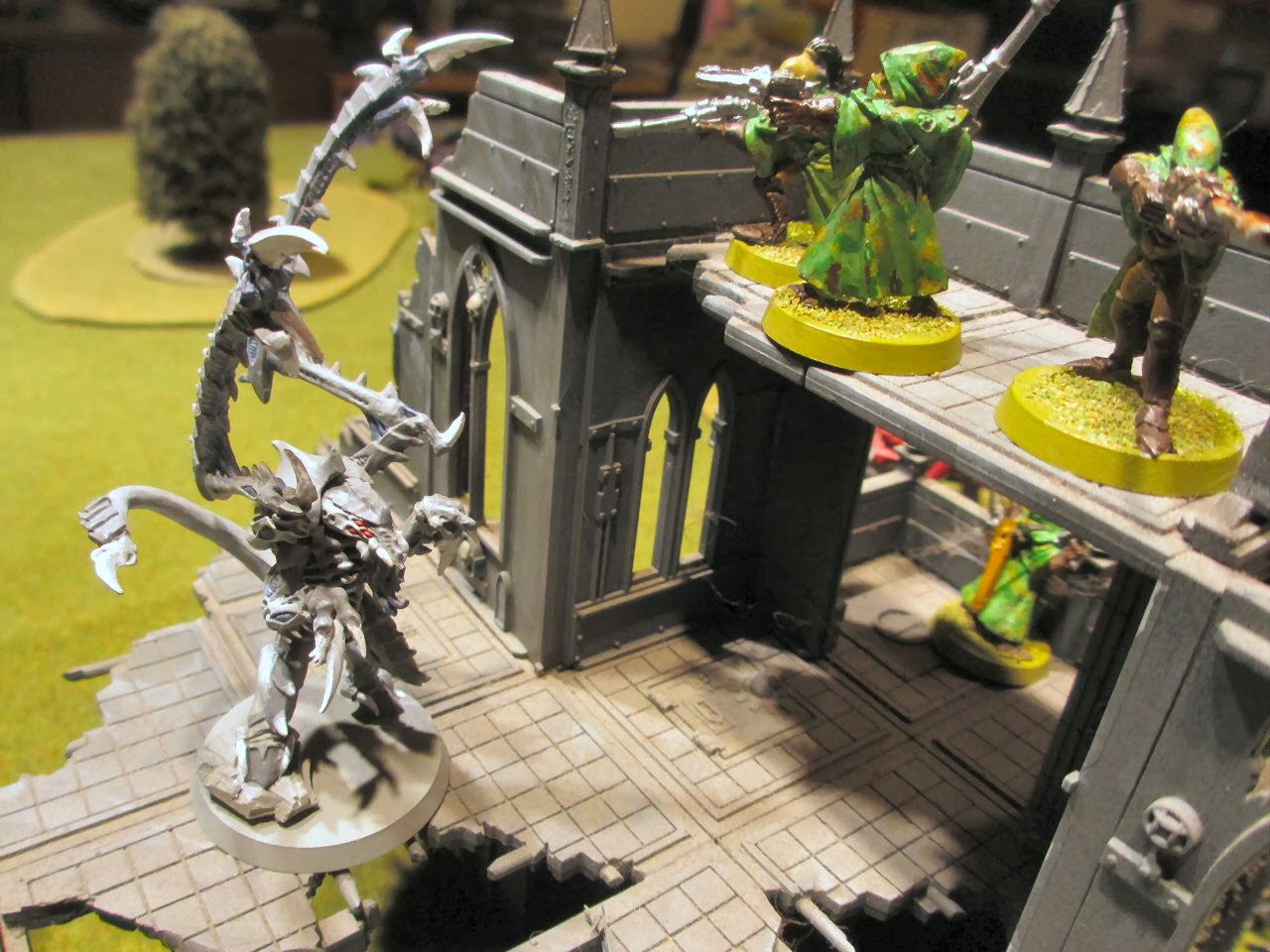 Yes, Deathleaper is painted. I have decided to paint the base green to make him stand out more.

The next turn was make or break time. Great shooting from the Eldar minced the 'guants and a Lictor despite the 3+ cover save. The remaining 'guants were in charge range so it was go time. 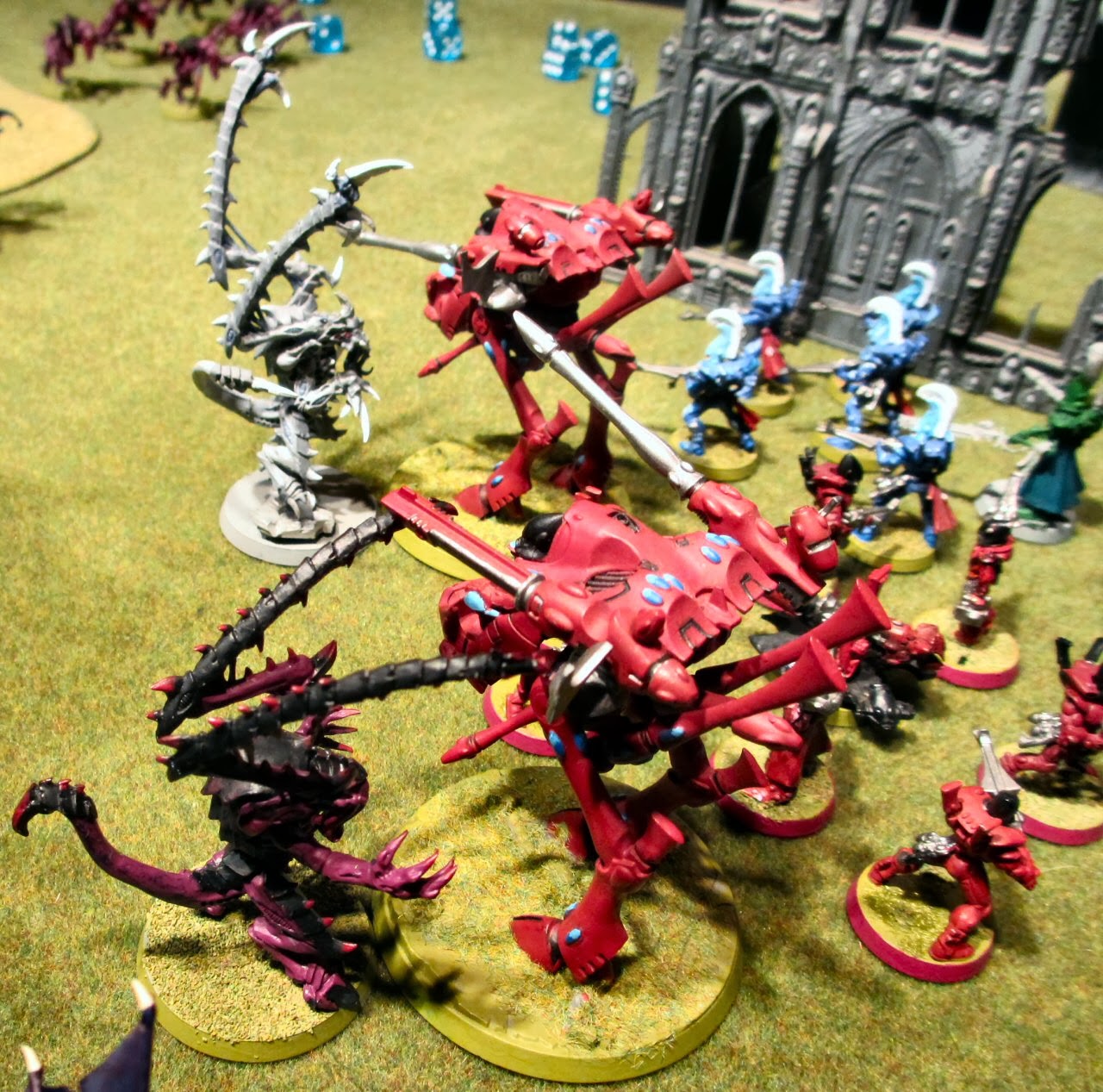 Both the War Walkers went boom, but the Hormaguant charge went poorly. I lost four to overwatch, then lost the combat by one and failed the morale check hard and was wiped out. After the Eldar's next shooting phase I was left with Deatleaper and a half flock of Gargoyles. The recon unit had escaped the trap.

The Eldar play the move and shoot game better than anybody. This would not have gone so nicely for anybody who has to decide between moving or shooting. Playing a small focused mission is always fun and was a good kick off to the campaign.

Kurnous Watches
And helps with shooting