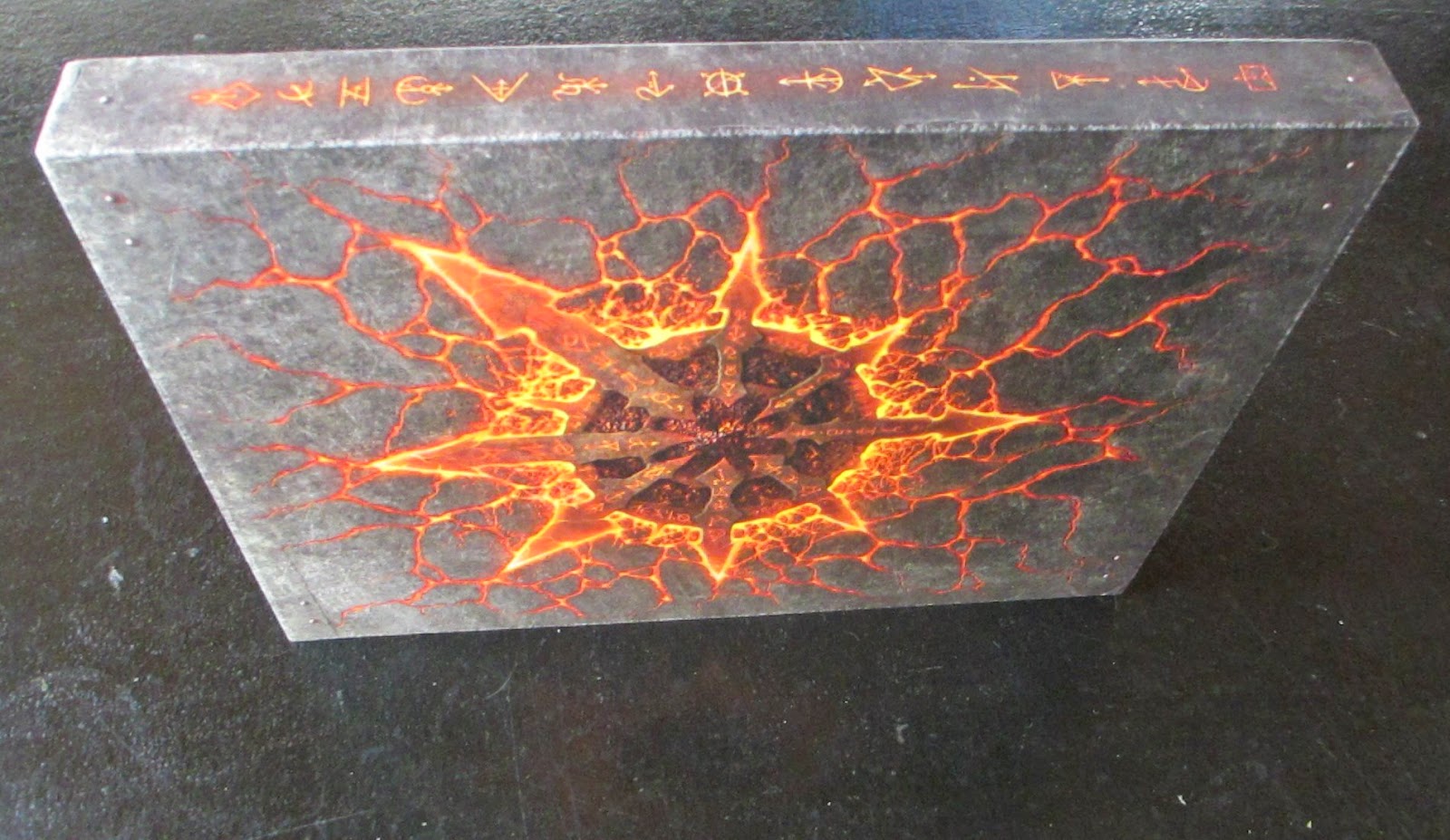 Not only is it Halloween, but also my wedding anniversary. The lovely Mrs. Blackheart gave me an awesome present, Imperial Armour Volume XIII: War Machines of the Lost and the Damned with the nifty slipcase. 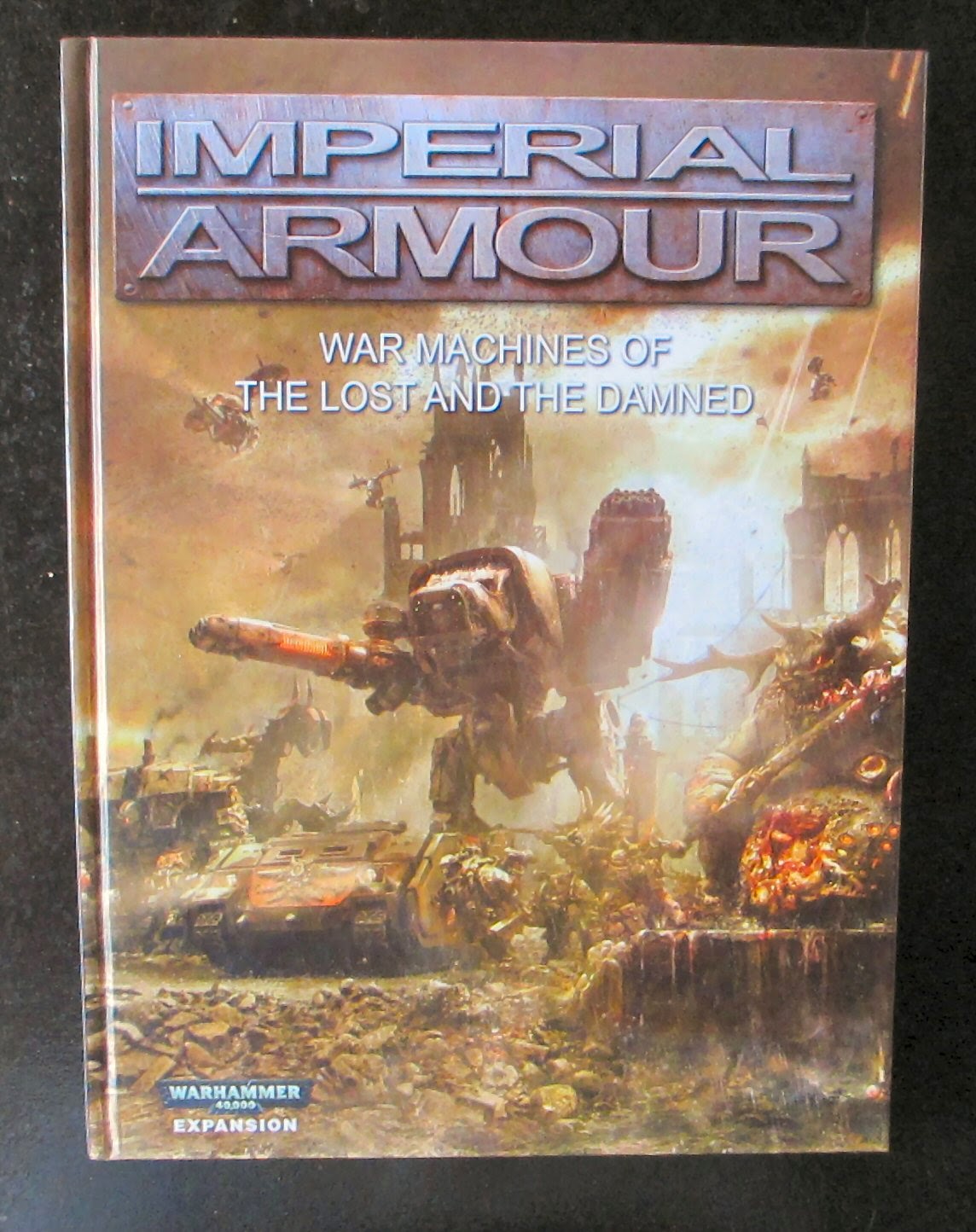 I'm not going into the whole FW vs. GW thing here, but damn, some days it seems that Forge World "gets" 40K so much more than the studio guys. If you are a Chaos player and like tanks and tank-like things then Xmas came early. 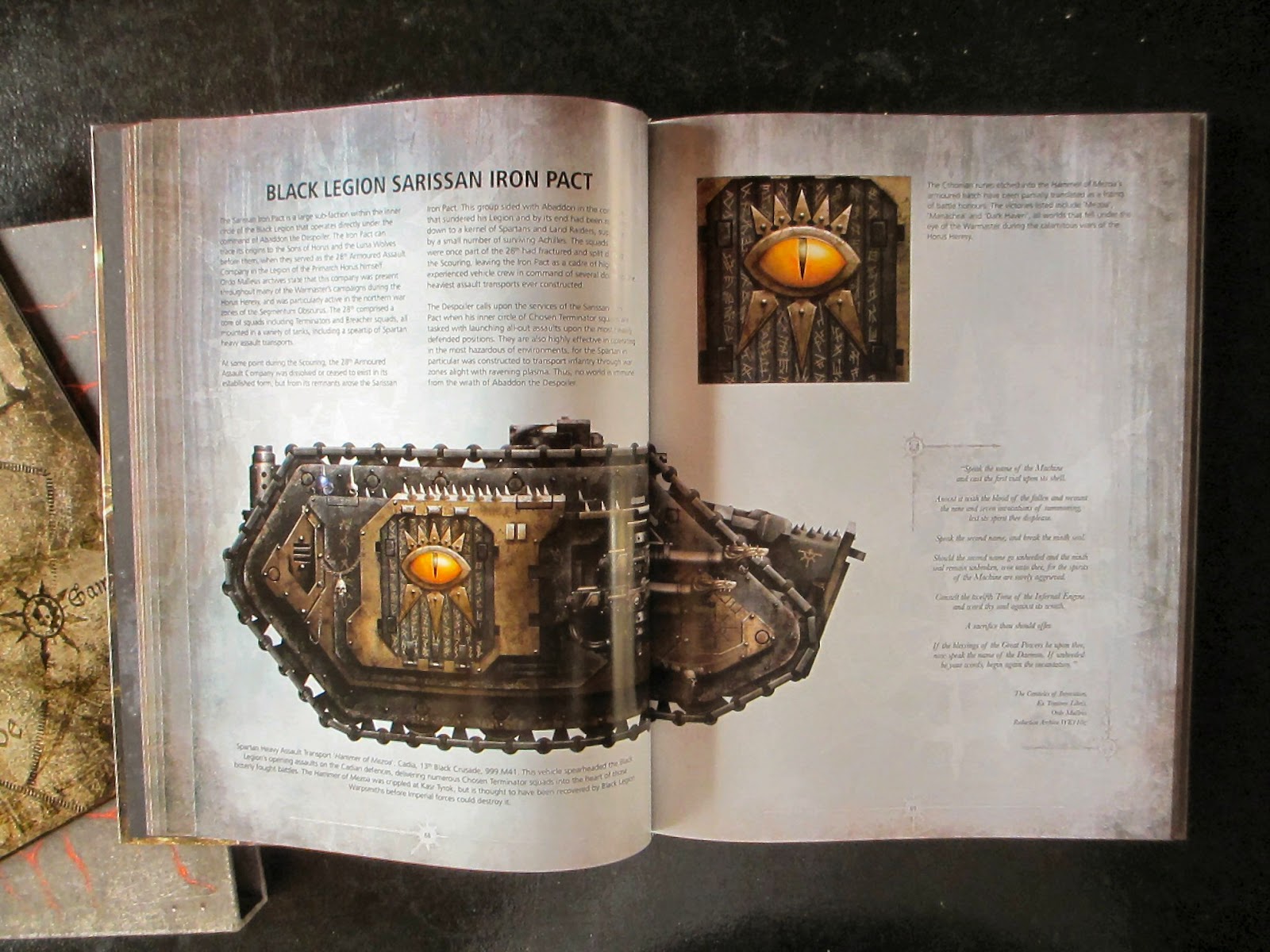 A mid sized book for FW, it still comes in at 208 big full color pages. Chaos Astartes tanks, assault vehicles, and super heavies, including all your Heresy favorites, Fellblade, Sicaran and more. 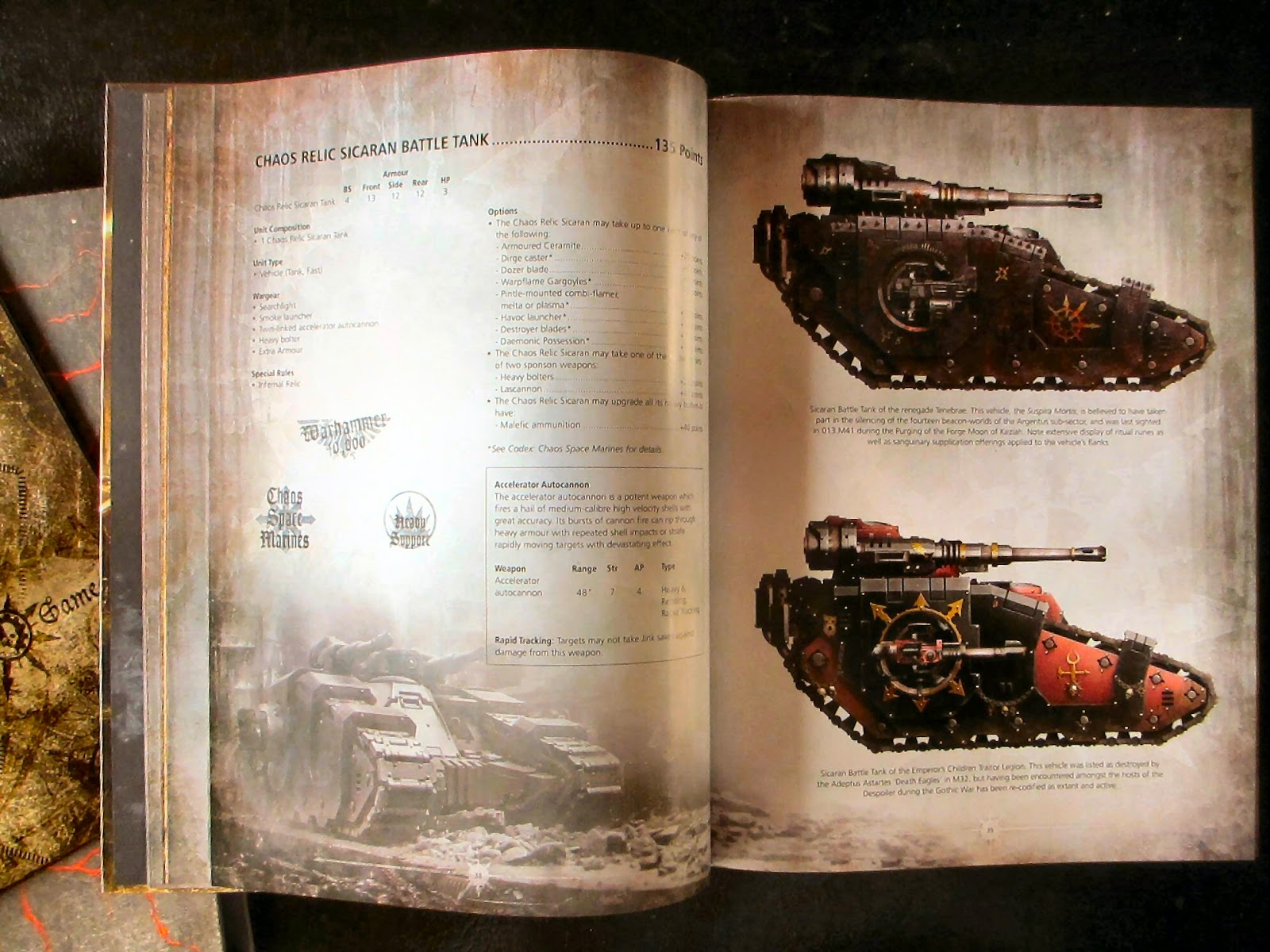 All the things that fly and walk plus a Renegade & Heretic army list. 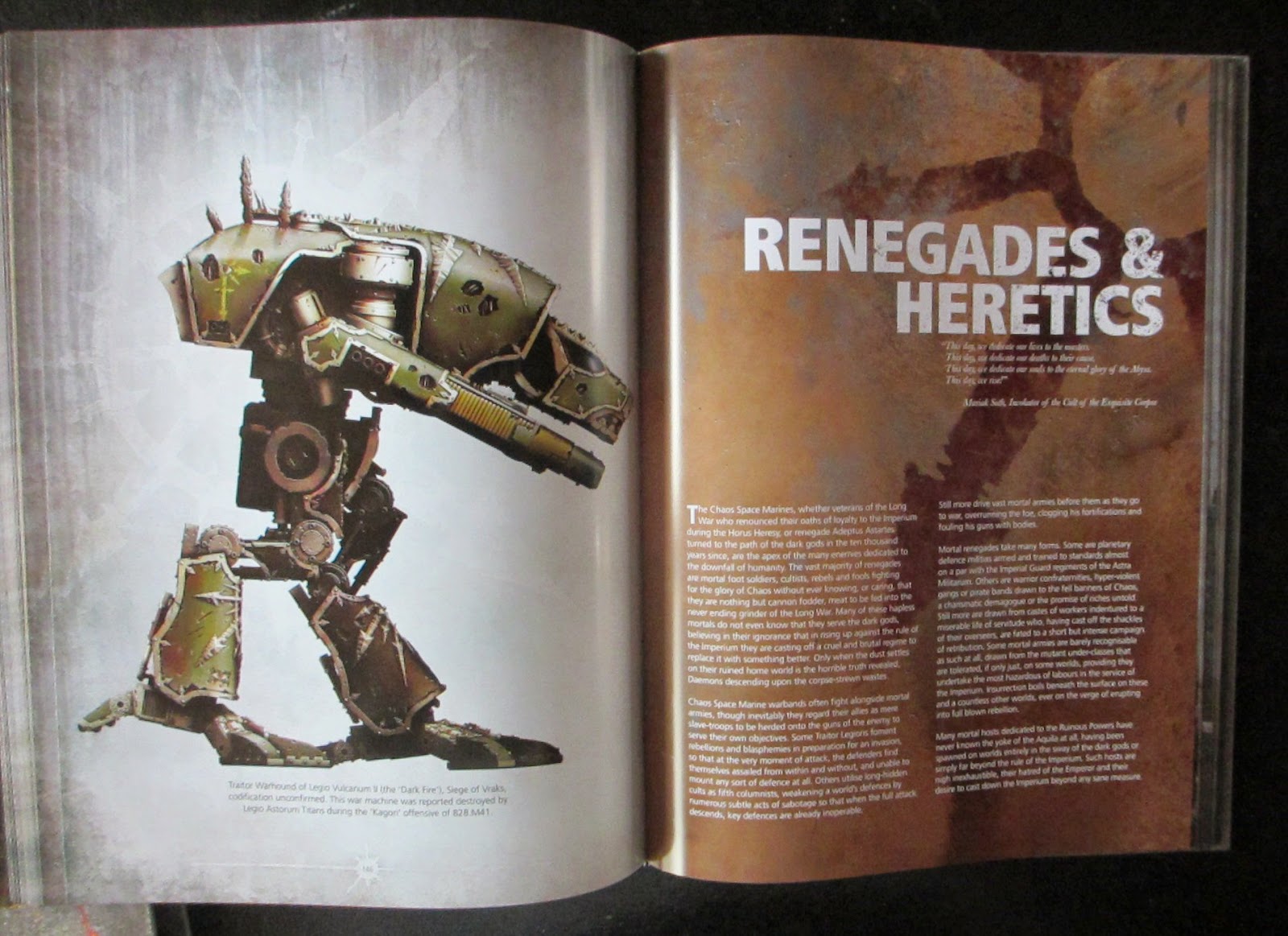 The book is full of FW's great artwork and fluff. It is really nice to have all of the Chaos vehicles in one book and the update to the Renegade army is well done. I highly recommend it.


Let the Galaxy Burn
And read all about it
Posted by Marcus the Blackheart at 3:15 PM 1 comment:

In some game systems new expansions devalue the old units that made the game and universe what it is. Where your core units that are supposed to be the majority of your forces are replaced by new units that are much better that you never take the standard ones again. It is a old problem, and not one exclusive to GW by any means.

It has a few names, power creep, shiny new syndrome, expansion-itis, and more. Car Wars, Battletech, and Star Fleet Battles are a few examples of this. By and large GW has done a pretty good job of keeping it under control, but a few units do come to mind, and I will be talking about these other ones in weeks to come.

I love Predators, ever since my first GW vehicle model (seen above on the left). More specifically, I love the look of the Predator with the autocannon turret. Next to the ever present Rhino, the Predator is the mainstay armored fighting vehicle of most Space Marine chapters. The most common variant is the Predator Destructor with it's turret mounted autocannon to chop up infantry and sponson lascannons for armored targets. A classic combination that has totally fallen by the wayside. 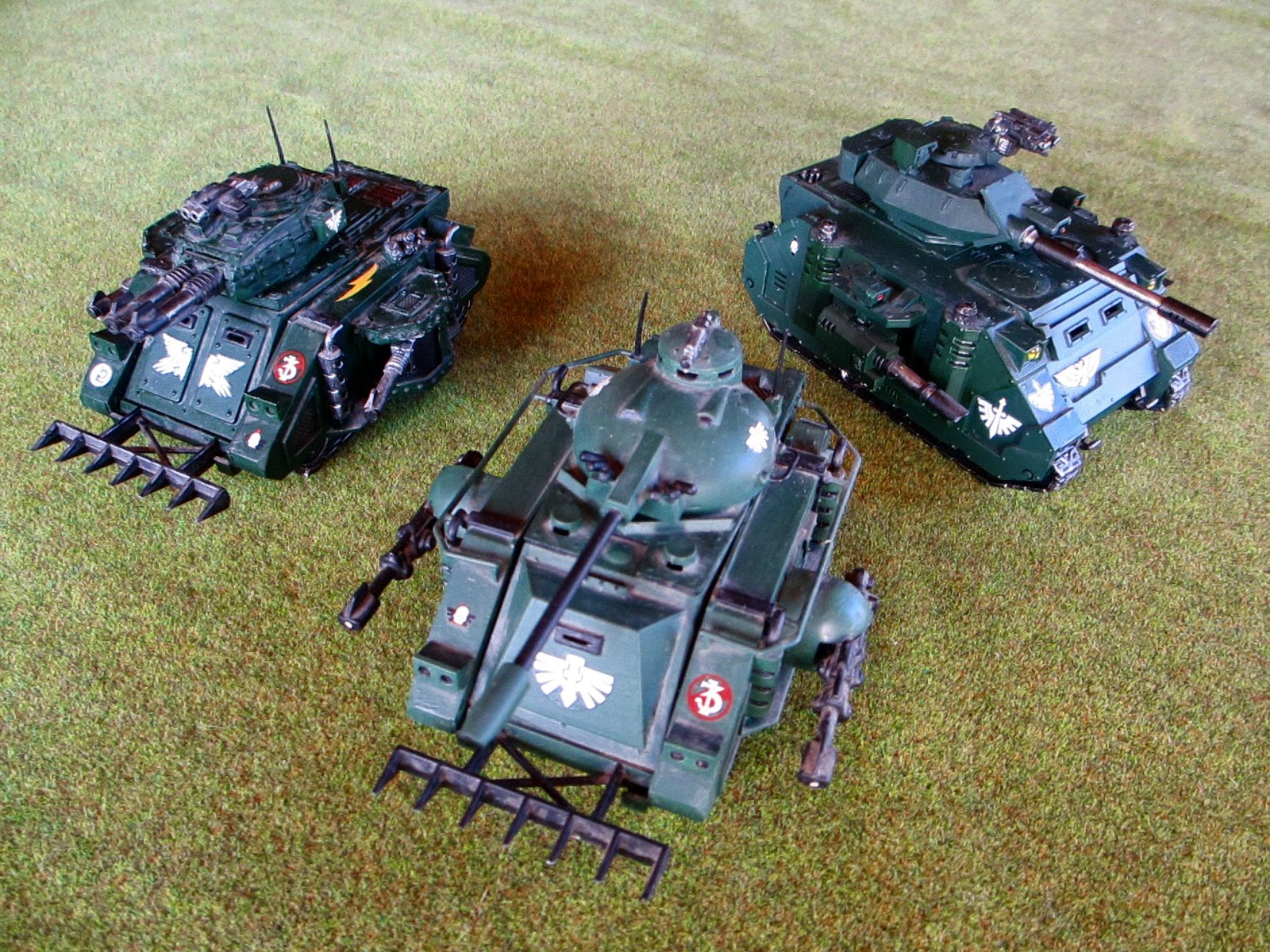 Way back in Rogue Trader and 2nd Edition days, the autocannon was a really good weapon. Strength 8, -3 Save (that meant folk in power armor could only save on a 6) and a random but usually fair amount of shots. It was not very good at penetrating vehicle armor, but that is what the sponsons were for.

That all changed with 3rd edition on up. Simplifying the game meant some weapons lost what made them effective. Lots of weapons were rightly dropped altogether. The autocannon was downgraded to make it a less powerful infantry squad version, which is fine, but the Predator's gun should have gotten an upgrade.

The Annihilator version's twin lascannons are good for anti-tank work, but the Destructor's single autocannon is inadequate for its intended role as hunter of infantry and light vehicles. How best to fix that? The Leman Russ Exterminator recently got a upgrade for its autocannons: Twin liked and 4 shots. That is nice, and much better than it was before.

The vehicle mounted autocannon having a increased rate of fire makes sense. It represents a large magazine feeding the gun as opposed to a soldier loading small clips as well as a more robust firing mechanism. The Predator's gun has a much longer barrel. This is key to increasing ballistic weapons muzzle velocity, which equates to longer range, better accuracy, and hitting power. The range on a autocannon is already high, and boosting it's AP or strength doesn't seem right in game terms, but giving it Rending fits well.

So that leave us with:

Give it a try, let me know what you think.

The Emperor Protects
And remembers how it was supposed to be

Posted by Marcus the Blackheart at 12:33 PM 7 comments: