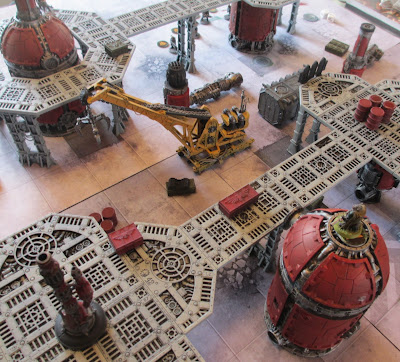 Our annual Carnage Asada fest was upon us last Monday. This time we went for Shadow War: Armageddon (SWA), A.K.A. Necromunda V.2. The good 'ole Necromunda rules have been cleaned up just a touch (to good effect) and the focus is on standard 40K combatants, not gangers. I do hope some new stats for gangers are released, just to bring them up to the new standards.

SWA is a great game. Very fast moving once you have a handle on the rules. It is easy to have a few battles in a reasonable time frame. Low model count so it is simple to keep track of all of them, and just enough extra detail to make it really interesting.

We had four active players. Each got in three battles in a day of fast moving carnage! 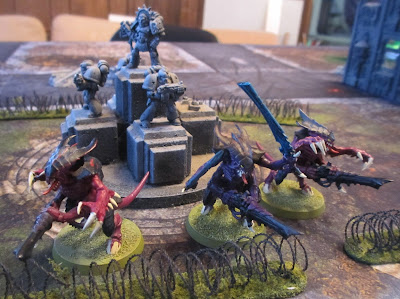 The smallest kill team with only three figures, the Tyranid Warriors were rightly feared on the battlefield. They finished the day at 2-1, losing only to the Space Marine Scouts.

A good multi-purpose Space Marine Scout team also went 2-1 with their loss coming at the hands of the Chaos Space Marines.

Chaos Space Marines and friends (flunkies?) had a solid force and a interesting dynamic of elite and fodder troops. They finished the day at 1-2.

The Genestealer Cult, the largest force with nine figures, only managed to defeat the rival Chaos Cult. They end up at 1-2 as well.

Now that we have a good feel for the rules, we will give the campaign system a go. The Genestealer Cult shall begin its rise.

Thanks to everybody who made it a great day in the underhive!


Welcome To The Under
If I could Only Stop Failing My Ammo Checks!

Posted by Marcus the Blackheart at 2:40 PM No comments: 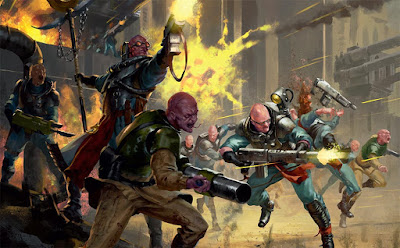 Amidst the exciting new changes for 40k, I have decided to postpone my grand Genestealer Cult campaign so we can get familiar with the new rules and no doubt tweak our armies to fall in line with the new hotness.

Depending on how sweeping the new rule changes turn out to be will determine how much it gets pushed back. Maybe 4th quarter or early next year. It will be fun, I do promise that.


The Cult Bides its Time
Soon the Stars (and Rules) Will Be Right!
Posted by Marcus the Blackheart at 4:15 PM No comments: 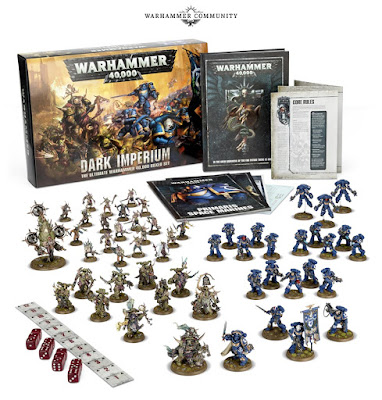 Pre-orders start June 3 for a June 17th release. No price info at the moment. The box set comes with a bunch of new models, the full 280 page, hardback rulebook, two mini-army books for Primaris Space Marines and Death Guard, plus some other items. 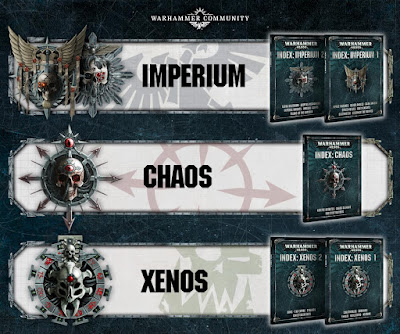 Five(!) separate softback books, Indexes for ALL of the current armies. We will be able to play everything on day one. Damn nice. Of course the rulebook will be available as a stand alone item. 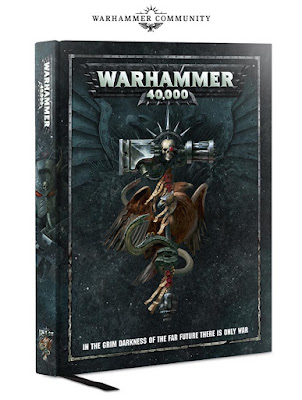 And that's not all! Command dice, Tactical Objective Cards, Wound tracker dice, and a set of objectives. Bank account prepare for impact! 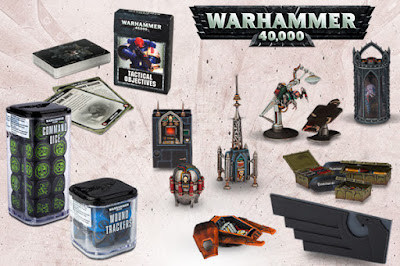 Oh, and the basic version of the rules will be ready as a free download on the 17th. This all looks great. This should prove to be a good summer of 40K.


The Emperor Protects
As Long as They Print Enough Copies

Posted by Marcus the Blackheart at 12:43 AM 2 comments: 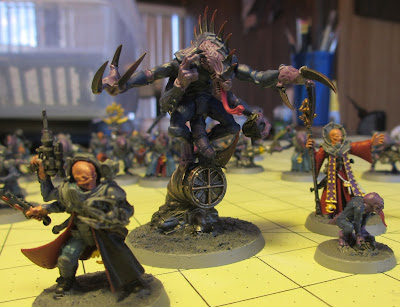 I have just finished painting all 97 figures in my Genestealer Cult Army. That was fun. I did a few things I haven't really done before. It is my first painted army that has no helmets! I had avoided painting skin because I was terrible at it. It's true. All my Dark Angels have their helmets on, mostly because you should really keep your lid on when people are shooting at you, and because I didn't want to screw up their faces. World Eaters? All helmets. Tau? Helmets. Tyranids? Doesn't count. My large Guard Army? Steel Legion! Helmets AND gas masks!

I did finally break this no-face streak and painted some Space Marine Scouts, and the Command squad for my Stormtrooper army are unmasked. One gent even has a fine mustache.

It was my desire to paint the figs for Star Wars Imperial Assault that really made me improve my painting skills. (Now almost average!) But it was still with great trepidation I embarked on the helmet-less Cult. At least they are all bald... 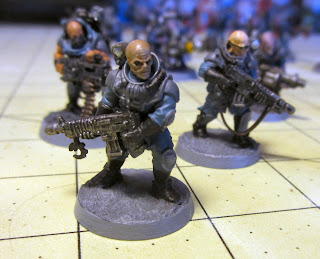 One fun thing was that since there were so many troops I decided to use a wide range of skin tones on the Neophytes. The thing that made the biggest difference was embracing a liberal use of ink washes. Yes, this is old news for real painters, but I took the plunge and I like the results. 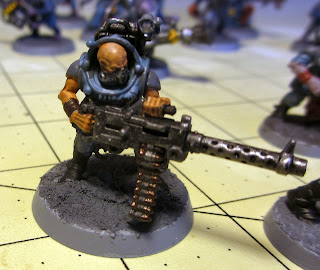 Second new thing was textured paint for the bases. I used Citadel Astrogranite (both regular and extra chunky) on the bases. They look nice. I'm still figuring out a highlight and/or wash to put on top of the texture, but so far so good. 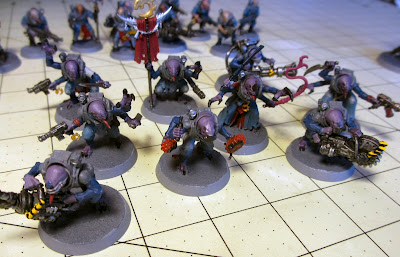 This week will see the Eight Cult vehicles get finished, just in time for one or two last games under 7th edition. 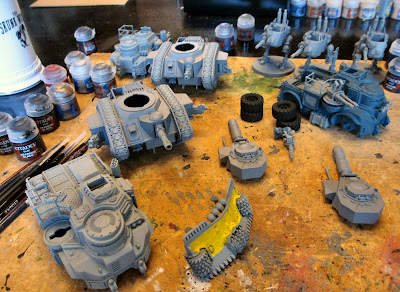 
The Cult Welcomes All
The Entrance Ritual Can Be a Little Intense Though...

Posted by Marcus the Blackheart at 1:02 PM 2 comments:

Back to the (GrimDark) Future! 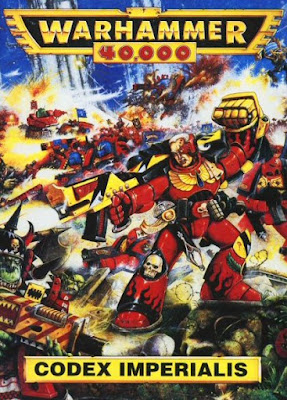 Thanks to this strange and new tactics of actually engaging with the player community, GW has been dripping us little previews of what 8th is going to be. And I like it.

First, GW has not called it 8th edition, just "New Warhammer 40,000". I do hope they call it something other than that. It is the 8th set of rules, but one could argue it is only the 4th different rules set. Hear me out,

Rogue Trader was clearly the First, but rapidly became 1.5 after the Red and Yellow books, and the new Vehicle Guide radically changed how shooting, hand to hand, and vehicles worked.

2nd Edition was a cleaned-up 1.5 with a brand new Psychic Phase, and Vehicle rules (this is a bit of a theme with 40K). Most importantly it was a boxed set, with everything needed to get playing.

3rd Edition was released five years later, and it was very different from 2nd. The following versions (4th-7th) were just refinements of 3rd, with the only radical changes coming to...the  Psychic Phase, and Vehicle rules. If you knew how to play 3rd, you could pick up any of the later version very quickly. 19 years is a good run for the core rules, but the rules have gotten so fiddly even veteran players struggle to remember all the fine points of the current edition.

A quick re-cap of the last two weeks news from Nottingham.

Coming back from 1st/2nd Edition:
Infantry Squads may fire at multiple targets. It just makes sense.

Shooting and saving is going back to 1st/2nd Edition. I really like this. I feel modifiers is a better system over the all-or-nothing system of 3rd+.

Twin Linked Weapons are two weapons, not just an extra chance to hit. More shots means more shots! If I shoot four Lascannons I should be able to get four hits.

Must shoot at closest target. I will need some more clarification on this one.

Movement stat. Some units more faster/slower than others. Simple, but welcome return.

New for this edition:
All models work them same. This is huge. Tanks, Infantry, Monstrous Creatures, Dreadnoughts, all have Toughness and wounds. About damn time. Obviously this removes the 10 cap on Strength and Toughness.

No more templates. Interesting. We will talk about this in depth next week.

To Wound chart is much simpler/elegant. Faster to be sure.

Characters cannot join other units, but give benefits to nearby units. Sounds cool.

What we haven't seen yet:
The Turn structure
Wound allocation
Line of Sight
Terrain
Official release date and products.

I'm still excited for this new edition, I haven't seen or heard anything I don't like yet. I will admit, for a while there I thought 40K was just going to slowly fade away. Doesn't look like it now.

The Emperor Protects
And Sometimes Even Makes Sense

Posted by Marcus the Blackheart at 1:01 PM 2 comments: