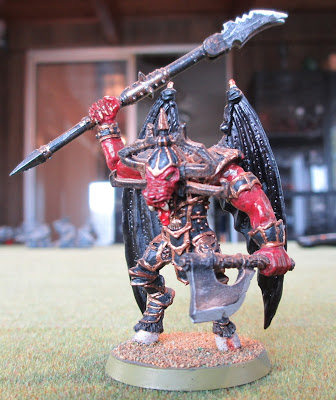 Kylar The Destructor, my Khornate Daemon Prince of course started out life as a imposing Bloodthrister in 2nd & 3rd Edition. Then the really huge and imposing Bloodthrister came out and this figure went to the sidelines for a short time. I had intended to make a Daemon Prince for my World Eaters but there was only that really lame, small metal miniature. As I was painting the new Bloodthister the obvious idea occurred to me; make the old greater daemon into a daemon prince. I swapped out the whip for a  homemade halberd/war-fork thingie, put him on a round 40mm base, add a new paint job and Kylar was (re)created. I don't have any pics of the "before" but I am still happy with the "after". I have been tempted to make a new version of Kylar out of the current plastic daemon prince kit, but for now, I'm sticking with the heavy lead version.

Blood for the Blood God!

Posted by Marcus the Blackheart at 11:54 PM 2 comments:

Blood Madness: After the first kill Korgor makes, either by shooting or hand to hand, Korgor gains the Preferred Enemy special rule for the rest of the game. During the move phase he must always move towards an enemy unit. He must always attempt to charge an enemy unit if there is one in range.

Elite: Korgor is an Elites choice for a Chaos Space Marine army that includes at least one HQ selection that has a mark of Khorne.

So here we are. I have several creations I will be posting in the coming months, but I really want to see yours. Send me the new unit's stats and history with a picture and I will post it. Big or small, from a new super heavy tank to a special veteran sergeant upgrade. Having more units can only increase our enjoyment on the battlefield.

The Emperor Protects
But an escape plan never hurt

Posted by Marcus the Blackheart at 11:59 PM 2 comments: