Wow, Games Workshop has really embraced this "Coming Soon" thing! They made a whole mess of announcements, starting with the upcoming Codexes (Imperial Knights, Harlequins,and Deathwatch) followed by a army building app "Combat Roster" and a bunch of Age of Sigmar stuff.

It is the mini-trailer for the Imperial Knights that really takes the cake. A nice live action bit followed by a awesome new Knight. The Dominus Class. A Knight with all the guns! 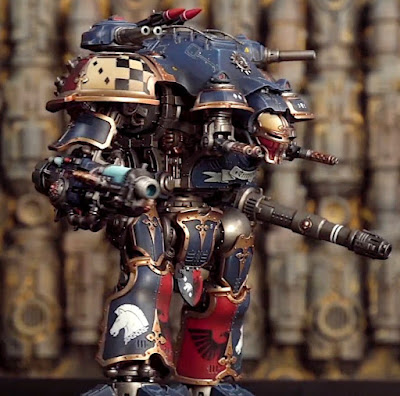 Two large arm weapons, four twin weapon mounts, and some missiles. I can't wait to add this my my Knight Army. I just can't tell from the video if it is any bigger than the current Paladin-style Knight. I'm thinking it is just a bunch of new parts that will fit with the current Knight kit, which is fine with me. This with the new Knight Armigers will give an actual nice variety of units in the new Codex.

For some faithfull, the biggest news of the night was the Sisters are coming in 2019...Emperor Willing of course.

Whatever could be next in this awesome time of New GW? Leman Russ finding his way back home? Plastic Aspect Warriors? A new Ork Warbuggy? Squa...no, let's not get carried away.


The Emperor Protects
And Loves Giant Robots Too

Posted by Marcus the Blackheart at 11:39 PM 2 comments: