Meanwhile at the Cantina... 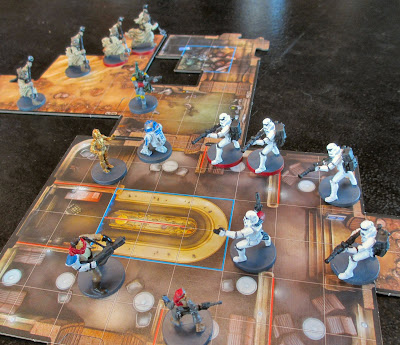 Twin Shadows, an expansion for Fantasy Flight's Star Wars Imperial Assault came out a month ago, and I just got done painting the figures and sorting in the new stuff. Let's have a look.

It is a "small box" expansion with a six mission mini-campaign, a pair of new Rebel heroes, Tusken Raiders, and Heavy Weapon Stormtroopers. Toss in new map tiles and a handful of new cards for both Skirmish and Campaign modes.  Not too bad at all. Also released at the same time, and used in the mini-campaign are Boba Fett, R2-D2 & C3P0, and the Stormtrooper Leader Character.

The mini-campaign takes place on Tatooine (hence the Twin Shadows title) so we do get the infamous Mos Eisley cantina (Chalmun's Spaceport Cantina for the deeply nerdy) for your very own seedy space bar shootout.

the new miniatures all look nice. The Sand People's Gaffi Sticks are a little soft and bendy, and Boba Fett's pose could have been a little more open, but that is the extent of my quibbles. 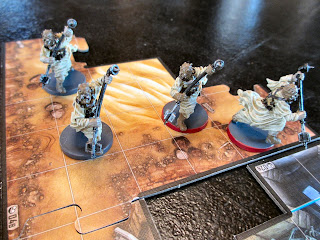 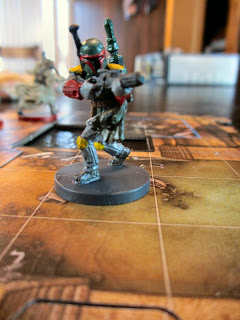 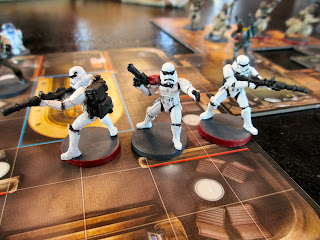 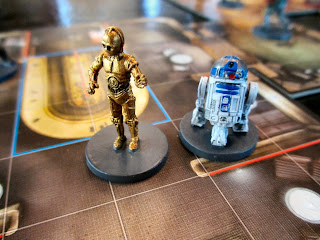 We are going to give some of new skirmish missions a try this weekend, and get started on the mini-campaign. I can't wait to see how Mr. Fett does on the field.


Go Roll Some Dice
What is a Jawa's favorite drink?
Martini!
Sorry. 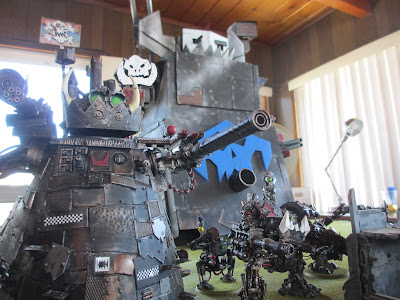 Time to see how Pete's Great Orkzinga fares upon the field of battle. The battle crazed Ork's brought 5,000 points in the form of nine models. The combined Blood Angel, Imperial Guard & Knights stood ready with 5K of mostly tanks and the Baron's Lance of three Knights. 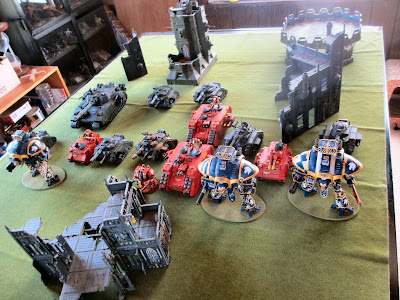 The Orks went first and unleashed a torrent of fire. The Belly Kannon was a big hit (pun intended). 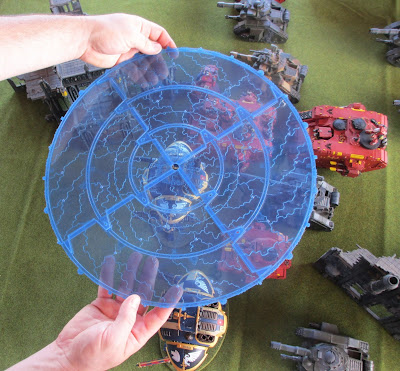 Thankfully the Knight's Ion shields held, but the Crusader was taken out, and the Predator was immobilized. 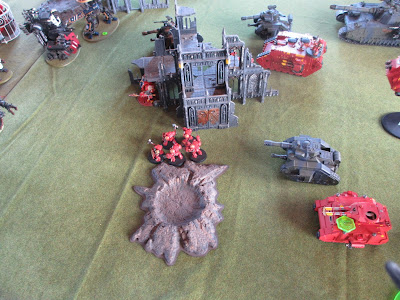 On the Imperial's turn all seven Leman Russ tanks, the Shadowsword, and about half of the Knights firepower was directed at the Great Gargant for a total of 12 hull points damage. 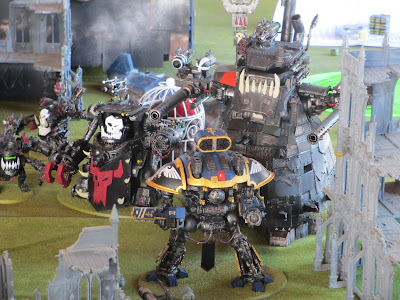 The two forces slammed into each other around mid-field. The Knight's Baron and Errant came out on top, huge chainswords are hard to argue with. A heroic Blood Angel Landspeeder came in via deep strike and did some damage to the Great Gargant before falling victim to the Flakk gunz. 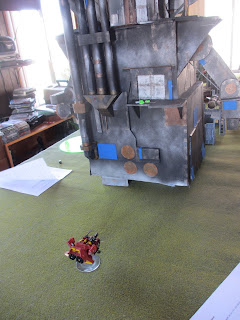 The bottom of turn three was the end for the Orks. The Mighty Orkzinga exploded in a blinding flash and the last Ork walker followed right after. Still, in three turns of combat, the Great Gargant had destroyed:
1 Land Raider Crusader
1 Razorback, and a six man Devastator squad
1 Landspeeder
1 Knight Crusader
3 Leman Russ Tanks
And a half dozen hull points worth of damage to a few other tanks.

Very good considering how  much firepower was arrayed against it.

Rules-wise I think it was very solid, a few minor tweeks to the weapons and the addition of Grot Riggers was all we came up with. Next time we will try just the Great Gargant against 2500 points of Imperial forces.


Bigger is Better!
Though it does also make you a Better Target
Posted by Marcus the Blackheart at 3:46 PM 2 comments: 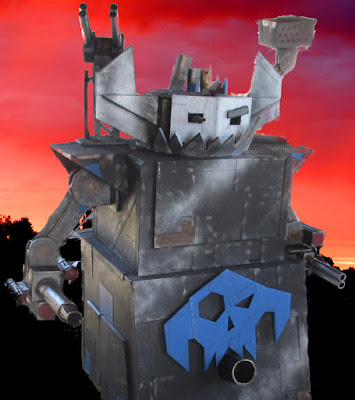 After a few delays, the Mighty Great Gargant (brought to you by Peter over at In The Grim Cheapness of the Future) is ready to hit the battlefield. All it needs are a few rules, so at long last here they are!

WARGEAR:
• Supa Force Field:  5+ Save vs. ALL shooting attacks, including "D"
• Grot Riggers

SPECIAL RULES:
•  Huge Effigy: All Orks within 24" are Fearless. If Gargant is destroyed all Orks
within 24" must make a leadership check. Units that fail are pinned.

Also, up to six Supa Rokkits may be added, plus six Big Shootas.

A Gut Buster Belly Kannon may be taken, but the transport is reduced to 30 models.

Notes:
The stats for the weapons can be found here.

Being an Ork work, it is more a fluff-based feel of the weapons fit rather than a constructive set of design rules.

The one large change I did bring was the swapping of the Ork Power Fields for a Force Field. Back in the distant past Power Fields worked like Void Shields. The gargant would start out with a number of them but once they were knocked down, they stayed down for the battle.

Now that Super Heavies really only lose Hull Points, it seemed like extra bookkeeping for no real gain. Orks are known for their use of Force Fields, which fluctuate wildly from completely impregnable to non-existent. It works very well in place of the old Power Fields, and is far easier to keep track of.

Next up: The Great Gargant in battle!